For some of us, if given the option, answering the question of would I rather be a knight, samurai or viking warrior is a difficult question.  There is no clear winner as all of them have some pretty awesome qualities.  Fortunately, after being anticipated for over a year, the time draws closer for the release of a game that does not force us to choose a single answer to this question.  For Honor takes place in an alternative version of this world where knights, samurai, and vikings will all meet on the battlefield.  In addition to the story campaign that spans across all three warrior factions, For Honor will offer a few multiplayer modes because, let’s be honest, we all want to hack our friends to bits with swords and axes from time to time.

Four different playable heroes for each of the three factions have been announced, making the number of available characters twelve.  The four hero types will have different names and appearances across each faction, but they are essentially the knight, samurai, and viking version of the same type of character, meaning that the preferred play style will be available regardless of which faction happens to be your favorite.  There was no customization option that effects how any character is played but there’s a plethora of style customization available to make sure your presence on the battlefield is a fitting representation of yourself, or at least how you wish others would perceive you.  This includes both being able to personalize your warrior’s emblem, along with the appearance of the warrior.  The appearance options extend to both weapons and armor, allowing everyone to design a battlefield avatar that captures what you think would appear to bring the most menacing presence.  Players are also allowed to choose the gender of their character with no impact on gameplay. 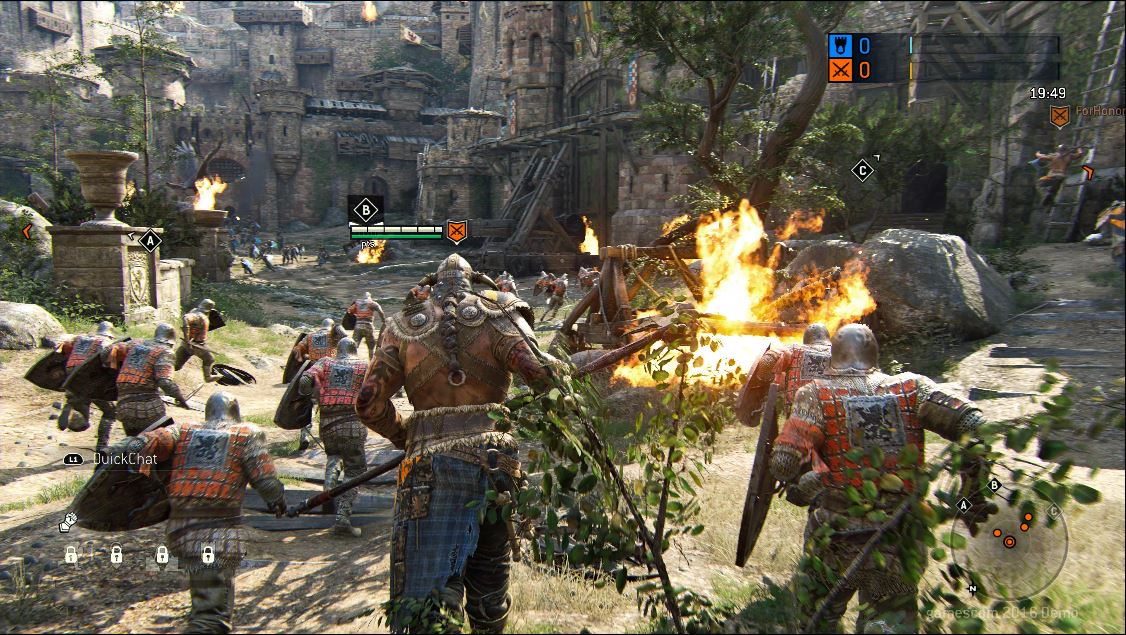 There are five multiplayer modes: Duel 1v1, Brawl 2v2, Skirmish, Elimination, and Dominion.  Duel 1v1 is a one-on-one face off, because that’s really what duels are.  Duels are a best three out of five affair, which can typically have a round end in roughly half a minute.  This is a battle where button mashing will only bring about defeat, as these duels are won through an understanding of the Art of Battle system — further explanation on that later in this article.  Brawl 2v2 is two versus two combat where victory is obtained by defeating the two enemy heroes.  Like Duel mode, environmental factors can be used to one’s advantage but cooperation and communication are also key components to winning the battle.  Skirmish is a four on four team death match, where battle skills are put to the test and points are accumulated by killing enemy heroes.  Elimination is also a four on four team death match, but in this mode the last player standing wins the match for their team.

Dominion is a four against four team battle, which is the mode I spent the most time with and also where all screenshots in this article are taken from.  Each map has an A, B, and C zone that is captured once it has been cleared of enemy forces.  Once a zone is captured, points will accumulate when a player occupies the zone.  Characters defeated in combat will respawn until the opposing team breaks them, which happens when they reach 1000 points.  After your team reaches 1000 points, the goal is to defeat all enemy players.  During this time they can be revived by teammates, but with the ability to automatically respawn no longer available this puts them at a disadvantage. Just be careful not to get too cocky when the 1000 point barrier is cracked since the tide battle can change almost instantly through reclaiming of conquered zones.  Once every opposing player is defeated, victory is reached.  Either team can lose points through having their territory recaptured, so no matter how bleak things may look in a match it is not over until it’s over. 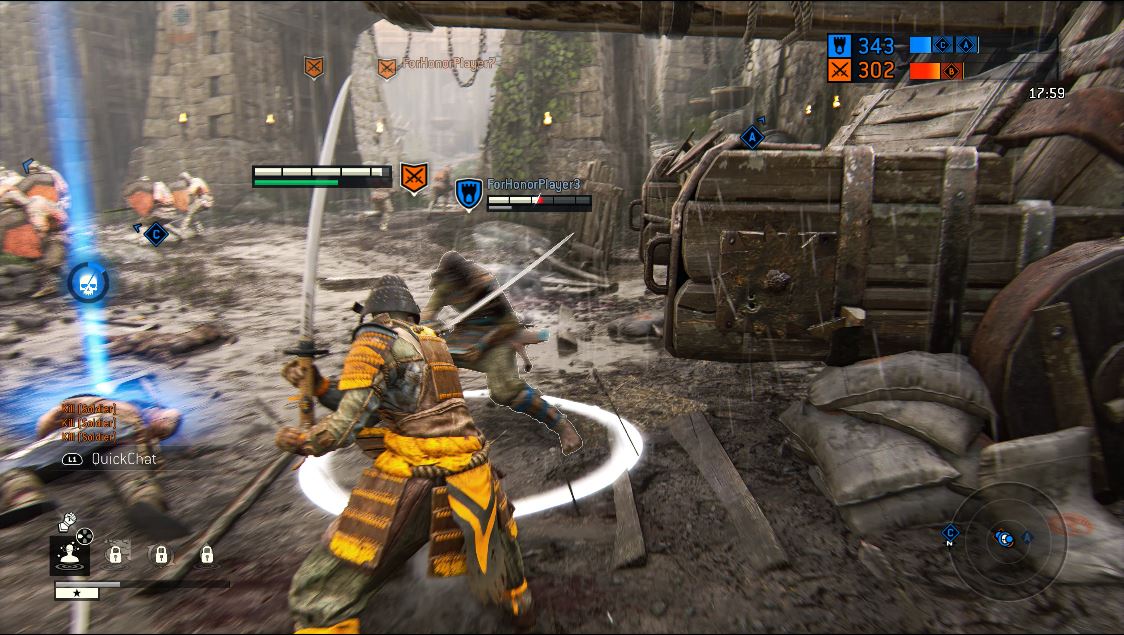 A very important but easy to overlook component of Dominion is communication among team members is crucial.  It could be tempting to recklessly charge into battle head on but the odds of success drastically increase when everyone on the team is on the same page.  Being as the game is played against live opponents there is no AI pattern to memorize but developing a decent strategy is the best way to turn a losing battle back in your favor.

The Art of Battle system is an interesting feature that does help distinguish For Honor from other medieval action brawlers.  The system is not employed against the battlefield grunts as those units are dispatched simply by swinging your weapon with no other finesse needed.  The Art of Battle is used against enemy heroes.  It uses the left trigger to ready a block and lock on your opponent and the right thumbstick to switch your stance, which determines where you block and where your attack is coming from.  For example, if your opponent attacks from the left and you are blocking up, your left flank is unguarded and the hit will connect.  It is actually a pretty intuitive system that adds a new element to battle, but it’s one of those things that is easy to grasp the basics of and will take some time to master.  It does make a one on one fight with another hero a more cerebral experience but also adds a sense of realism to the game mechanics. 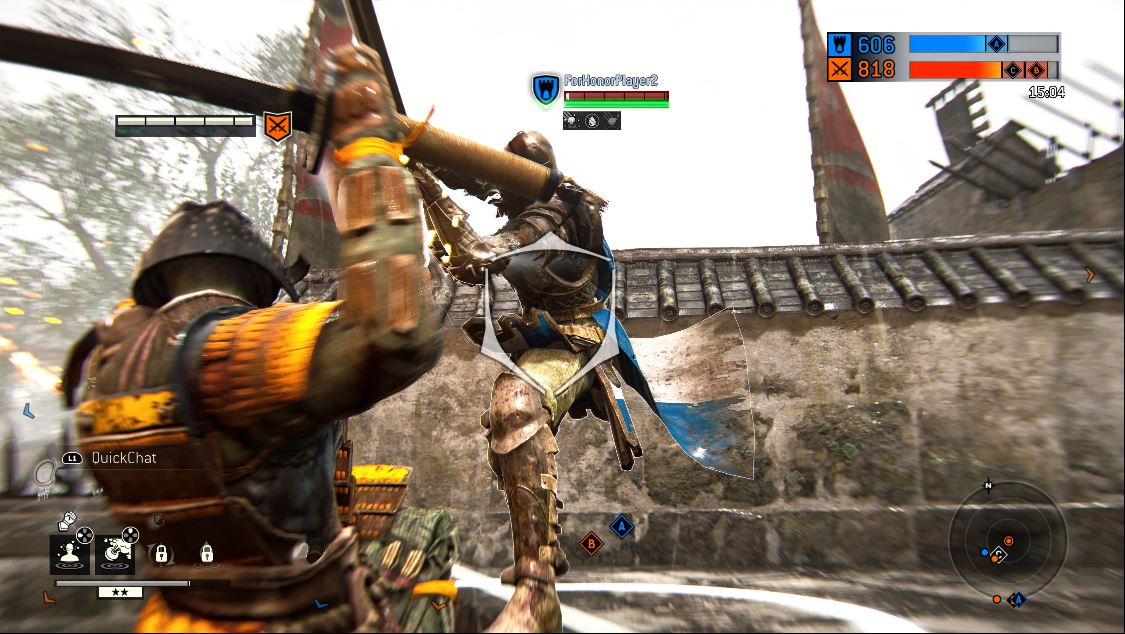 For Honor is appropriately slated for a Valentine’s Day release next year, and the inclusion of these multiplayer modes make it sound like the perfect activity to spend with that special someone.  On a holiday where people seek out the heart of another, you can play a game where said heart is taken by force.  Regardless of whether this game makes the grade for a suitable Valentine’s Day activity, since learning about it at PAX West 2015, this has been something we have been keeping my eye on as the more information that’s revealed, the more intriguing For Honor looks.  With six months left to go before its scheduled release, it looks like both the single and multiplayer content will be worth the wait.