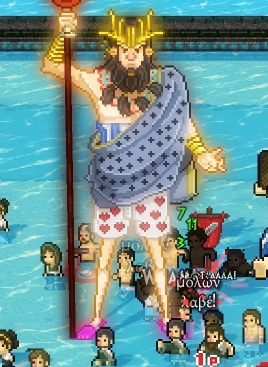 It’s pretty much common knowledge these days that the gods of Greek mythology we tended to romanticize in various pieces of fiction were, in fact, actually pretty big jerks. Such is the setup for Okhlos, where the citizens of ancient Greece are sick of constantly being stepped on (figuratively and literally) and thus venture out to riot against these deities, fighting dickery with slightly-more-justified dickery. Taking the form of a top-down, semi-retro, twin-stick action game, you have to lead your fellow frustrated Greeks through several famous locales in order to strike them all down. It’s a nifty concept, but is this anarchy-fueled journey worth it?

The story is that…well, that was already given away in the opening sentence. Okhlos is light on story, but the important detail is that the person rallying the Greeks to cause chaos is a philosopher. The philosopher is the character that you control with the left thumbstick/WASD keys, and the mob is controlled with the right thumbstick/mouse. You can gain additional troops by touching them with the mob, with classes such was warriors, defenders, and other philosophers ready to assist. The philosophers are essentially your lives: die and you switch to control of another philosopher in your group. Run out of philosophers and it’s back to the very beginning.

So gameplay-wise, Okhlos almost feels like a mix between Smash TV and Katamari Damacy. You travel around an area beating up the various cyclopses, sirens, satyrs and such until the area is clear and you can move to the next one, and in between you gather more troops when needed. It’s a simple concept, but an extremely fun one, helped by the fact that it controls quite well. It definitely does have the perfect portion of arcade-style feel to it, with troops quick to react to your commands (though with the occasional one getting stuck) and a consistent fast pace. And a fast pace is indeed required, because in order to have the most effective mob possible, you need to keep morale high, and to do so requires having to keep the destruction rolling. Defeating enemies or smashing scenery increases the morale meter, and the higher it is, the more powerful and effective your team is at taking down obstacles. Stop, and it begins to go down. So not only is the catharsis factor in full effect here, but it’s necessary. Cause enough mayhem and you find yourself transformed into what is basically a giant ancient steamroller, able to take down entire buildings in a snap. 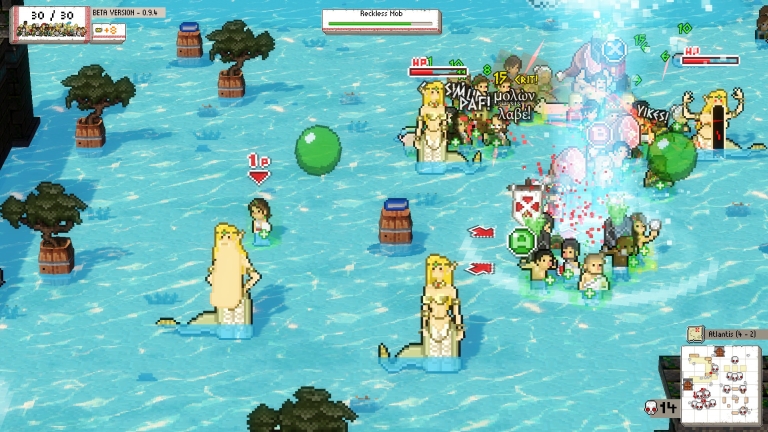 The destruction itself is also captured quite nicely, as Okhlos perfectly blends together pixelated sprites and characters with polygonal backgrounds and buildings, creating a unique “pop-up” look that’s quite attractive. The music is also swell, nicely putting a Greek spin on some appropriate 8-bit tunes. The real standouts, though, are the massive enemies, with each enemy type having their own particular charm, even across multiple variations of the same enemy. The level design also puts nice spins on locales such as Athens, Sparta, Atlantis, and more, with their own specific foes and obstacles.

The bosses are even more of a sight to behold, towering above you as they attack with variations of their well-known traits (Hera turns troops into animals, Hermes attacks with razor-sharp messages, et cetera). The unique heroes are also cute, varying from Achilles and Castor plus Pollux to Hannibal and Baron Munchausen (Note: This game may not be one hundred percent historically accurate). Okhlos’ sense of humor is also definitely welcome, and quite charming when it’s subtle (like seeing bursts of Greek text and otherwise come from your mob)…not so much when, say, the narrator directly references 300 with a groaner. 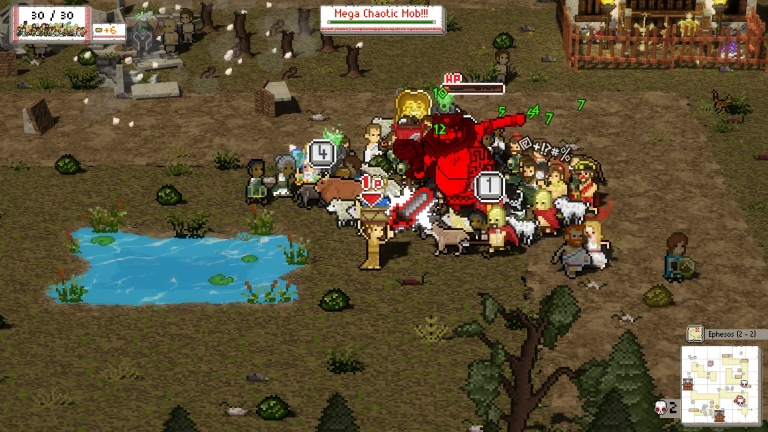 Speaking of the heroes, they play a rather large part in the game as well, by providing stat boosts and/or special passive effects to your team. To earn them, you have to either trade in troops in between stages, discover them as part of a secret, or unlock them as as you progress in the game, the latter resulting in some you can choose to have at the beginning. You can also exchange different type of troops in between, and given that each type has their own area of expertise, it’s up to you to try and find a perfect balance (especially when only certain troops can carry the power-ups that you find), though the game is mostly accommodating enough for any strategy.

You also have to properly command your team’s size to maneuver around different varieties of obstacles like swinging maces or whirlpools, and make sure that they’re still around to protect you, as the AI is smart enough to go straight for the leader. Throw in a hefty amount of unlockable enemies, areas, and codes to discover by doing some exploration, and Okhlos surprisingly has a lot to offer. That said, the rapid-fire chaos of the gameplay is clearly its biggest strength.

Unfortunately, as mentioned in our last preview of the game, Okhlos’ biggest strength also ends up working against it at times. The chaotic feeling of controlling a giant mob makes for some great fun and impressive visuals, but not only can things feel cluttered at times, it can make it quite hard to actually monitor what troops you have and their current status. For that, you need to pause the game, which breaks up the flow a bit. It especially gets annoying when you can be a couple levels in only to discover that the the healing effects that one hero gave you are no longer being applied, and that they died back in a boss battle without you noticing. And also as mentioned before, the early stages do feel a bit more reliant on button-mashing, though you will have to apply a bit more strategy later on. Still, at times it does feel like the game is having difficulty juggling dumb, arcade-esque fun and more complex, management-reliant tactics. 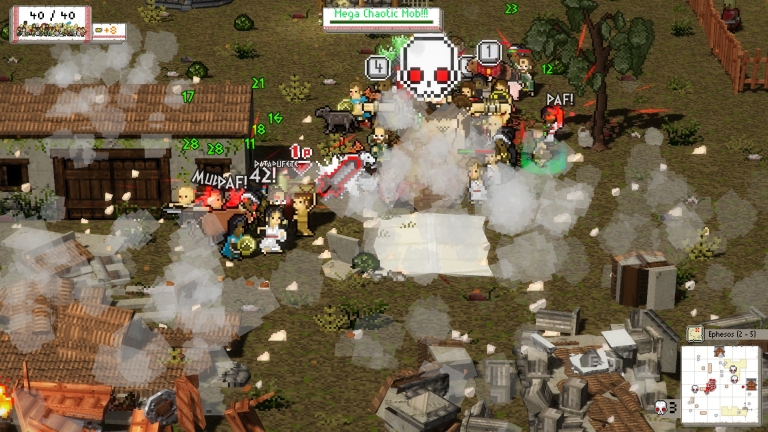 Even with some moments where the game feels a bit too frantic, damned if Okhlos isn’t a ton of fun. Each game will be quite quick (typically resulting in your death) and has that old-school feel that perfectly captures the joy of blasting away hordes of enemies, but this time with a swords-and-sandals twist. It really does get a lot of mileage and joy out of putting a freaky spin on Greek mythology, resulting in a charming, cute and funny game that looks terrific and plays just as well. It’s a blast from the past in more ways than one and you should check it out. Deicide has never felt so good indeed.