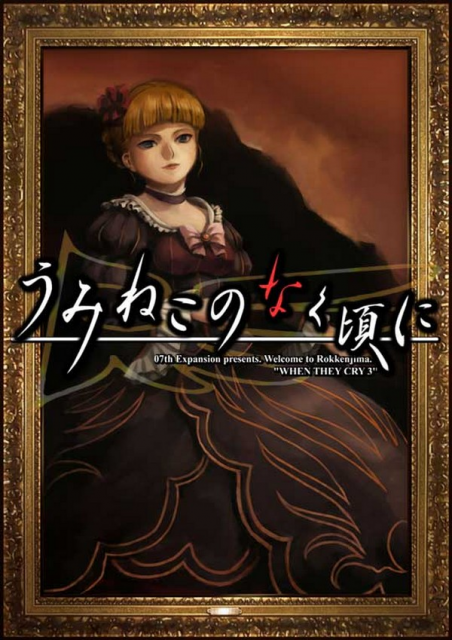 Umineko When They Cry

There have been many times in the history of visual novels that fans become so intensely interested in sharing a game with others that they form into groups to translate them free of charge. Years ago, this happened with the Umineko no Naku Koro ni series. Translation group Witch Hunt did a pretty great job with 07th Expansion’s title and helped spread the greatness that is Umineko to others. Last year, MangaGamer began re-releasing the Higurashi When They Cry series (also by 07th Expansion) with new sprites, Steam support and a totally upgraded translation. It was only a matter of time before they made an official move with Umineko. Now that Umineko When They Cry (Question Arc) is out, everyone is able to get this much-loved visual novel series easily on Steam.

The question for those who never played it during its original release or fan translation may have a few questions. One, what the heck is Umineko When They Cry? Secondly, do they need to play Higurashi When They Cry first in order to understand this game? At the onset it may seem that Umineko When They Cry has a very common plot line. Its focus is on the wealthy Ushiromiya family which consists of the ruling father figure, Kinzo, his four adult children, and their children and spouses. Kinzo’s doctor reveals to the family that there likely isn’t much time left in his life, meaning there will soon be a tremendous battle with regards to inheritance money. Everyone intends to settle this issue during the upcoming yearly family meeting. The thing is, this meeting always takes place on Kinzo’s island – yes, he’s seriously wealthy enough to own an entire island and build a mansion on it.

With tensions flaring on this secluded island, it only makes sense that people will get hurt. However, no one expected that family members would suddenly start being killed off. Where Umineko When They Cry diverges from the typical mansion murder mystery is that there is a lot more going on than simply trying to guess who committed the crimes. There’s also a mystical matter thrown in. It appears that the Ushiromiya family has a longstanding rumor that Kinzo’s riches were initially created thanks to a witch named Beatrice. Is it possible that there is actually some sort of witch presence in the mansion, or is that simply a red herring to keep people from discovering the real murderer? Chances are you’ll get plenty confused and see your own opinions shift back and forth throughout a playthrough of the Question Arc. 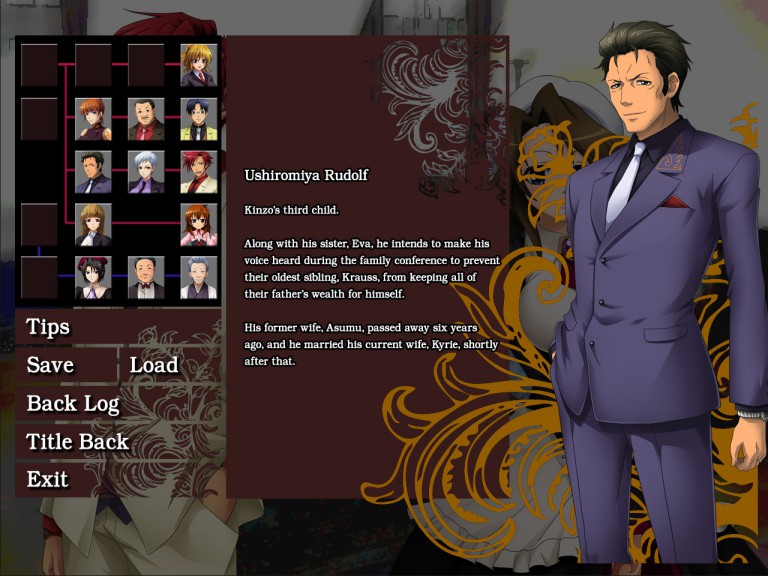 It’s absolutely not required to play Higurashi When They Cry because the two titles are almost completely separate entities. Their stories are not meant to overlap, except for a bit of an Easter egg character between them. The two visual novels are similar in their presentation, though. Umineko When They Cry is a kinetic visual novel that is also broken up into multiple chapters. The first four are available as part of the Question Arc on Steam. Each of these tales brings us to the island and has players watching murders occur day after day. However, the intriguing part is that each time events play out they do so in different ways. The first episode may feature the deaths of certain individuals, while the second chapter has completely different folks dying and surviving. This leads to further confusion as to who could be behind the deaths and what they hope to attain because of them. Over the top of these deaths is another layer of storytelling which eventually overtakes the actual murders themselves.

You’re going to be spending around forty hours minimum with Umineko When They Cry (Question Arc), so hopefully the writing works for you. There are not many typos in the current version, and the writing is engaging. The only thing which may annoy some people are the weird flourishes that some characters have in their speech, such as elongating words or laughing oddly. For others, that proves just part of the charm of the game’s incredibly unique cast. Unlike most visual novels which feature a cast of spirited teens, we’re given a lot of time with middle aged family members dealing with business drama or child rearing troubles.  The teenage children wish to simply goof off but can’t fully distance themselves from the problems their parents face. Once they start getting killed off, it places an even greater burden on their young psyches. Even the mansion’s servants have woes to deal with amidst this terror. 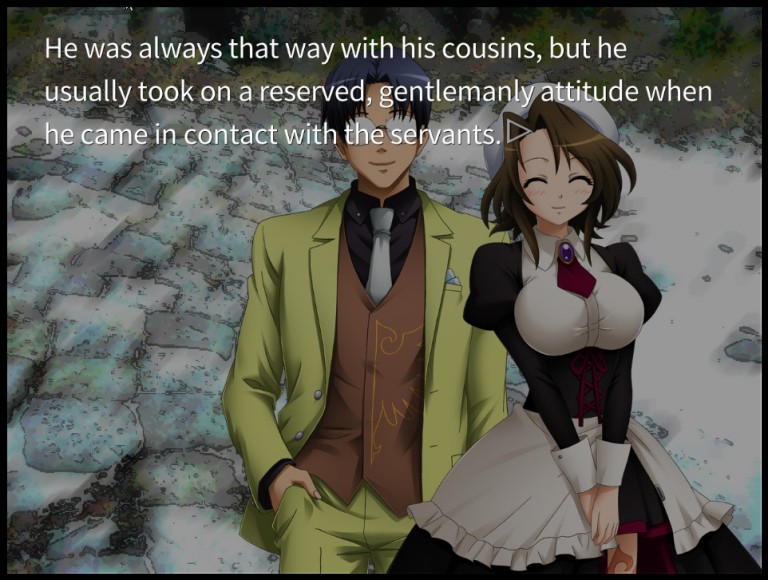 The original release of Umineko When They Cry featured rather large, unpolished character artwork. MangaGamer have included improved sprites which are selected by default. However, those looking for the authentic experience can swap to original art at any time. One thing to note is that late in the game there are a few sprites which didn’t get the upgrade treatment, which looks weird when contrasted against the new artwork. There is no voice acting aside from one key sound effect but it works well. With how much you’re reading it would take far too long to listen to everyone banter back and forth. Finally, the music is sublime. Tracks fit in perfectly with the mood of the moment and often come across as totally creepy.

There are some issues with this game which are due to its engine. Unlike most other visual novels out there, you’ll find text options incredibly lacking. There is an auto text mode but it defaults to one specific speed with no way to change it. For me, this was terribly slow and instead required a steady stream of mouse clicks for over forty hours. Suffice it to say, this causes a fair bit of strain when all you want to do is sit back and enjoy a visual novel. There is also no means to change the text font, coloration, or transparency of the background color. It becomes an issue in some instances, such as when red text appears as it is harder to make out against the backdrop for some. When you are spending so many hours in a game focused on reading the experience really should offer more choices. Again, this is the fault of the game’s aging engine and its limited capabilities, but it proves quite the hindrance. 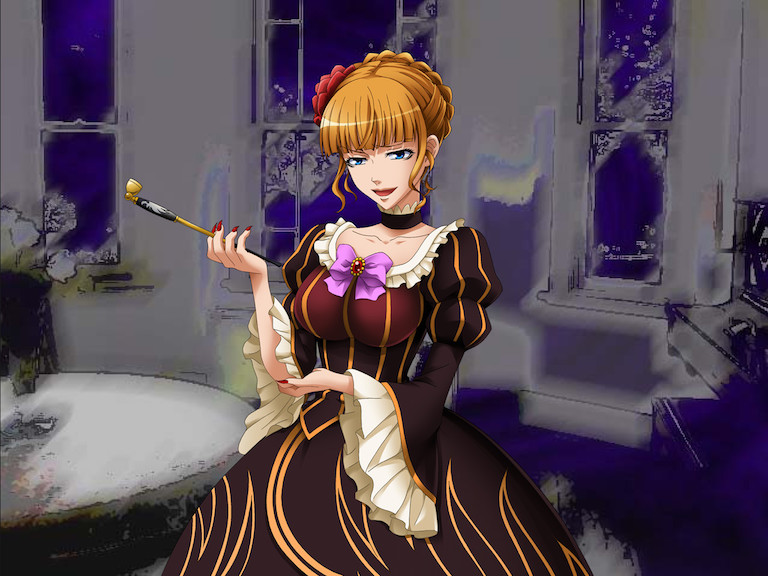 It’s fantastic to see Umineko When They Cry available on Steam. As far as visual novels are concerned, the complex tale of murder and mystery it weaves can only be matched by a few other titles. While at first you may struggle to remember who is who, by the end you’ll have an intense knowledge of the Ushiromiya family and their internal struggles. However, you still won’t likely know the answer to this massive murder mystery. This is the Question Arc, after all, and the Answer Arc is still forthcoming from MangaGamer. The biggest let down is that the game engine leads to a great deal of frustration when playing. If not for that total annoyance, this release would be the ideal way to experience Umineko When They Cry.