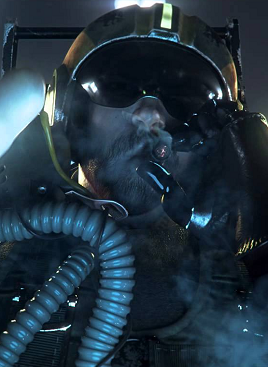 It takes a special type of courage to create a high speed futuristic dogfighter that specializes in allowing players to take the battle into narrow confines. There is no margin of error. If it’s too forgiving, players won’t feel the elation that comes from conquering not only the enemy, but the environment. Making it too difficult would just lead to a worse crash-a-thon this side of the No Man’s Sky PC port. For a developer to attempt this while calling themselves Ragequit Corporation shows a certain amount of self-awareness. Fortunately, the results found in Strike Vector EX speak for themselves.

Primarily a multiplayer title, players are each dropped into a Vector, a space ship that can hover and instantly jump to high speeds with a push of a button, stopping instantly by releasing said button. This means that a good player can go from being pursued to the pursuer by waiting for the right moment, stopping, swiveling, and taking chase. This wrinkle in aerial combat adds a great deal of fun, but the true star of the combat is found in the maps. Each map is smartly laid out. A battle might be set around a space station, floating city, a pair of large capital ships, or somewhere else, but no matter the setting, there is a sense of variety found in each map. Whether it’s zooming through the open sky, or winding through narrow paths, there is always a new strategy for the brave or conservative player, for the highly skilled pilot, or the one who prefers to treat the Vector as a sniping platform.

What makes this work so well are the highly tuned controls. Admittedly, it took a match or two to become acclimated with the feel of the combat, but after this short period, it just felt right. I was weaving between skyscrapers, dropping mines to shake pursuers, and shooting down teammates like no one’s business. (Yeah, I didn’t realize that there was friendly fire at first. I was a tad too indiscriminate with my rockets. Should any other reviewers talk about having a horrible time because of some jerk, it was me.) It’s just so easy to dial into the controls here due to a well tuned lay out and default sensitivity. 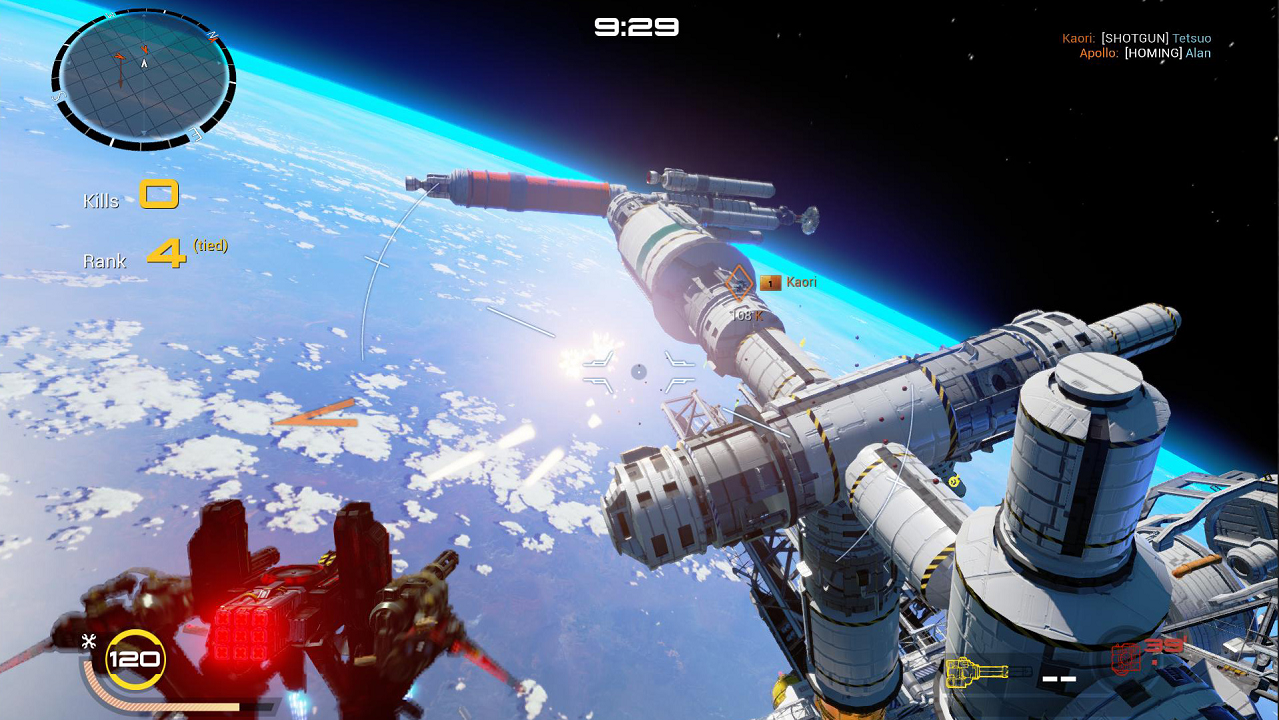 All the tuning in the world wouldn’t mean squat for the controls if the frame rate can’t keep up. Ragequit Corporation has this covered. This version was rebuilt from the PC version using Unreal 4, with an eye on keep the frame rate at 60fps. The work paid off. Some of the maps aren’t the most visually appealing, and the fireballs that pop after wrecking look extremely cheesy. Such is the price for a rock solid refresh rate. On the right map, though, this game is stylistic and appealing. One, in particular, is set in and around a floating city, green and blue in tone. Covered in neon signs, it looks like a place that is grimy and lived in, while still having a futuristic sheen.

One has to admire the sheer amount content that went into Strike Vector EX. While it is a multiplayer focused title, it comes packing fifteen maps, a nice amount of visual ship customization, and tons of primary and secondary weapons to use. The vast dollops of modes piled in keeps the things fresh. While certain modes might be more favorable than others in the community, there isn’t much opportunity to get bored of the goals while still improving piloting skills, earning XP for badges and art unlocks. 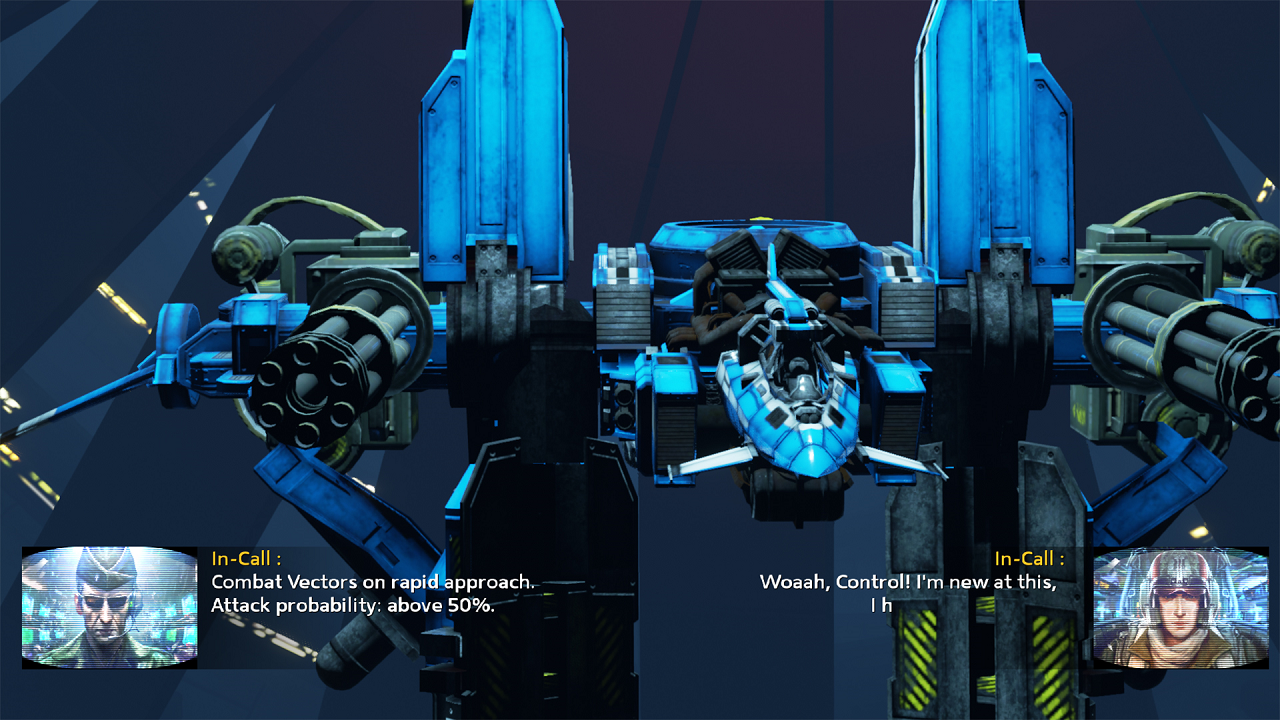 Now, while the multiplayer is why people should come to this game, there is a single player story mode, too. The battles found in this story take place in the multiplayer maps, which is fine. The story itself is…not good. Basically the player takes a pilot from a rookie to leader, murdering any named character who hires or flies with him. The particulars and floating loyalties don’t make a lick of sense.

The story mode itself serves two main purposes: to allow the shy player to practice with weapons and fly away from tough competition. The campaign serves this ideal well. Every weapon is viable with the challenges the game sets forth, allowing experimentation without punishment. There is also an “escape the Death Star” type sequence that pushes the player to hone their skills while avoiding outcroppings and keeping ahead of an oncoming conflagration. This particular section took me a few tries, but was probably the highlight of the campaign. The other purpose is to learn the maps. Most missions use the entire map, but a few force the player to pay closer attention to specific sections. I found a few camping spots that I might never have noticed otherwise. If a potential gamer decides that they hate people and competition after completing the campaign, there is also an offline bot mode, with the full run of match types and configurations 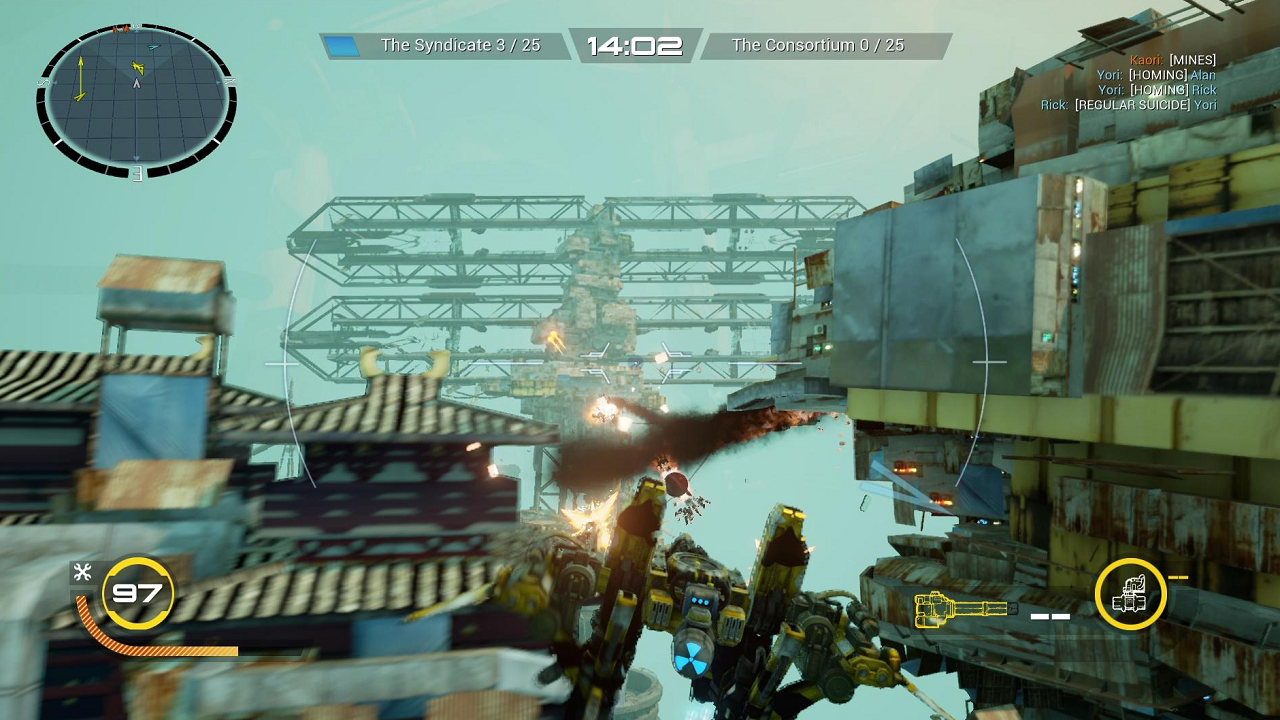 It’s impressive how good Strike Vector EX really is. Something like this should be a recipe for frustration, a conceit even the developer acknowledges by awarding a trophy for the first crash called “Welcome to Strike Vector.” In practice, though, this fast-paced arcade flight game manages to be intuitive and natural, allowing the player to strap in and blow up friendlies at a pretty good clip. Anyone wanting a single player experience should probably wait for a sale, but everyone else would be well served snagging a copy as soon as possible.