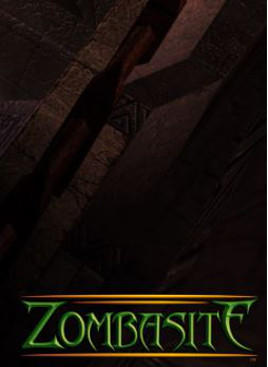 The zombie apocalypse has been in full swing for quite some time now and there is no cure in site.  During this pandemic, the burden of providing public assistance falls on any able bodied individual and a certain writer at Hardcore Gamer has not been doing his due diligence toward his part of said public service.  So many zombie games exist and the numbers are always increasing and so many zombie titles are simply forgettable.  How is the discerning fan of zombie games going to know which games bring some originality and enjoyment to the genre amidst the horde that should be sent back to their graves if game journalists do not answer the call of duty?  This negligence has been brought to our attention and I have been tasked with righting this wrong.  Several months ago the question was asked if Zombasite breathes new life into the zombie apocalypse, and today that question shall finally be answered, and there was much rejoicing.

An undead uprising is not a concept that is unknown to fantasy worlds as evidenced by the existence of Ravenloft and some relics of PC gaming such as Death Knights of Krynn.  What is a new twist is an approach that has been taken by no other games that immediately come to mind, which is putting survivors of the zombie pandemic into different groups in the style of The Walking Dead and having it take place in a fantasy world full of dark elves and goblins and orcs (on my!).  The world of Zombasite is in a state of disarray thanks to some trouble making dark elves.  There was one powerful dark elf necromancer in particular, there are some who would call him Tim Ciglio, who ended up creating a bunch of zombie slaves and binding them and their victims to himself, making them unwavering in their loyalty to him.  As things tend to work out with necromancy, his influence on the ever growing zombie population extended even beyond Ciglio’s own death.  This led to the creation of a parasite that turns its host into a zombie.  This parasite is known as the, wait for it, Zombasite, and zombies infected with this are able to maintain all abilities and intelligence in their current state of unlife.

The initial impression of Zombasite is that is simply another fantasy themed isometric action RPG, aka Diablo clone.  There are several classes to choose from, we have the usual subjects such as warrior, wizard, and rogue et cetera present with their own branching skill trees.  There is also an option to create a hybrid class, which only has two branches as opposed to the usual three, but this is less of a deterrent than it sounds like since if you have the best skill tree of two different classes the potential to create a unique and deadly warrior exists.  Once the character is created, they are placed in their randomly generated settlement and can venture out, either exploring the world aimlessly or by accepting quests from the bulletin board.  Playing the game is done the same way many other games of this ilk are, the mouse controls movement and left clicking does the basic attack.  Special abilities, items, and potions can be executed by assigning them to number keys.  Battle and world exploration is done in perfect Diablo clone fashion. 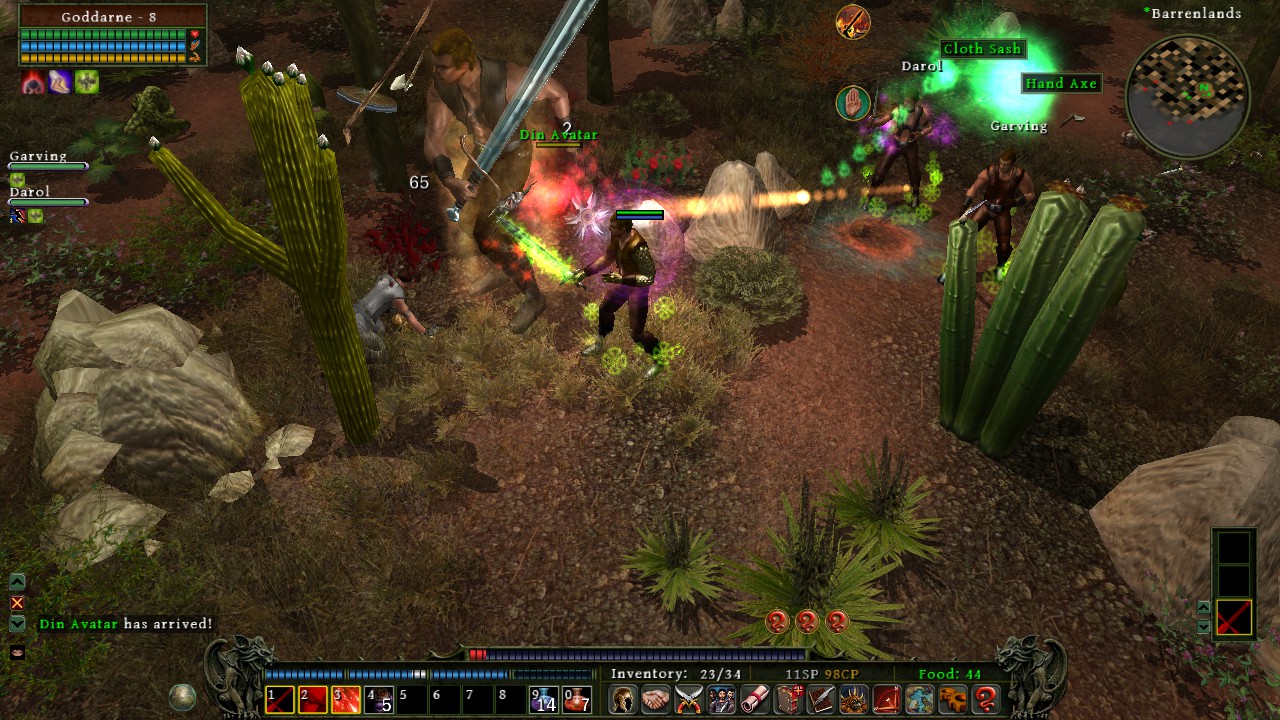 But despite what that above paragraph may lead you to believe, Zombasite is not simply a Diablo clone.  The influence is undeniable, but what separates this title from being a simple imitation is the importance that one’s clan plays in the game.  Each character begins as being part of one of several clans of the surviving, uninfected humans and demihumans.  New clan members are recruited by completing quests or by simply finding them during adventuring.  Keeping the clan members happy and safe is an integral part of success.  The base of operations needs to be secured, which can be done by putting stronger gates around the encampment as well as placing guards around the perimeter.  Relics can be placed in the encampment that provide bonuses to both the player and the allied NPCs.  All camp management is done through the pedestals located near the board in the center of the encampment.

Keeping clan members happy and fed is another aspect of camp management that cannot be ignored.  Food is an important resource that can be collected through random enemy drops or a more efficient means is to send out a hunting party.  Two NPC clan members can accompany the player, but as the clan grows there will be a bunch of NPCs wandering around the encampment.  Put those freeloaders to use, assign them on hunting and other material gathering expeditions.  Keeping your people happy is also an important part of clan management, which seems like it would be difficult when everyone is trying to survive in a world being overrun by a zombie making parasite.  Giving people gifts, talking to them, and sometimes giving someone a gift and saying its from another NPC can help smooth over NPC relations.  Like that popular zombie TV show, sometimes clan members do not get along with each other and may fight to death.  Breaking up fights is not always easy, and sometimes to maintain the greater peace it could be easier to just pick one NPC to kill before the feuding spreads.  This is not always the best way, but sometimes you gotta do what you gotta do.  Gifts, food, and attention are better ways to prevent these fires from starting, instead of having to figure out how to put them out later. 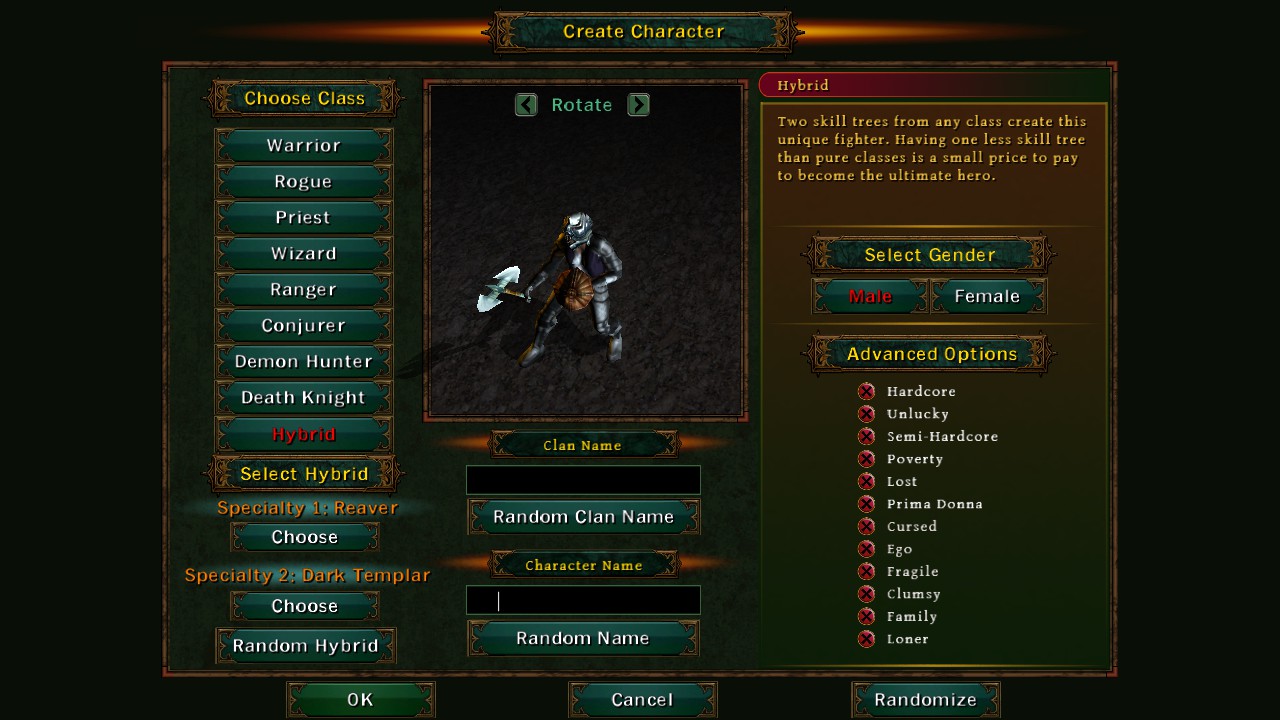 Zombasite is designed to make each playthrough unique.  Each world that a new character begins in is randomly generated, and if one does not like the world they are given the option exists to create a new world while keeping the character.  Sometimes this can be inflicted on the player.  If the settlement is destroyed in an attack, the character is transported to a brand new world, and by new world I mean completely new.  During the review playthrough I was unsuccessful in defending my encampment that was surrounded by dense forest populated with goblins and orcs.  The new encampment was surrounded by desert, and filled with anthropomorphic tiger people.  The newly generated worlds are not just the same base design rearranged, the layout and locations within are completely different each time.

The world of Zombasite is one that behaves like a living world.  In addition to the randomized nature of events and the NPCs behaving independently with their own issues, a lot of quests are time sensitive.  If a quest requires someone to be killed by the player, the quest can be failed due to an NPC, friendly or hostile, killing the target instead of the player.  There are quests that involve rescuing someone, and it is advisable to make those priority.  There is no countdown on the screen, but if it is ignored for too long the quest will fail because something ended up killing the NPC.  Failing these quests does not result in failing the game, it simply means the player must live with the consequence of the outcome. 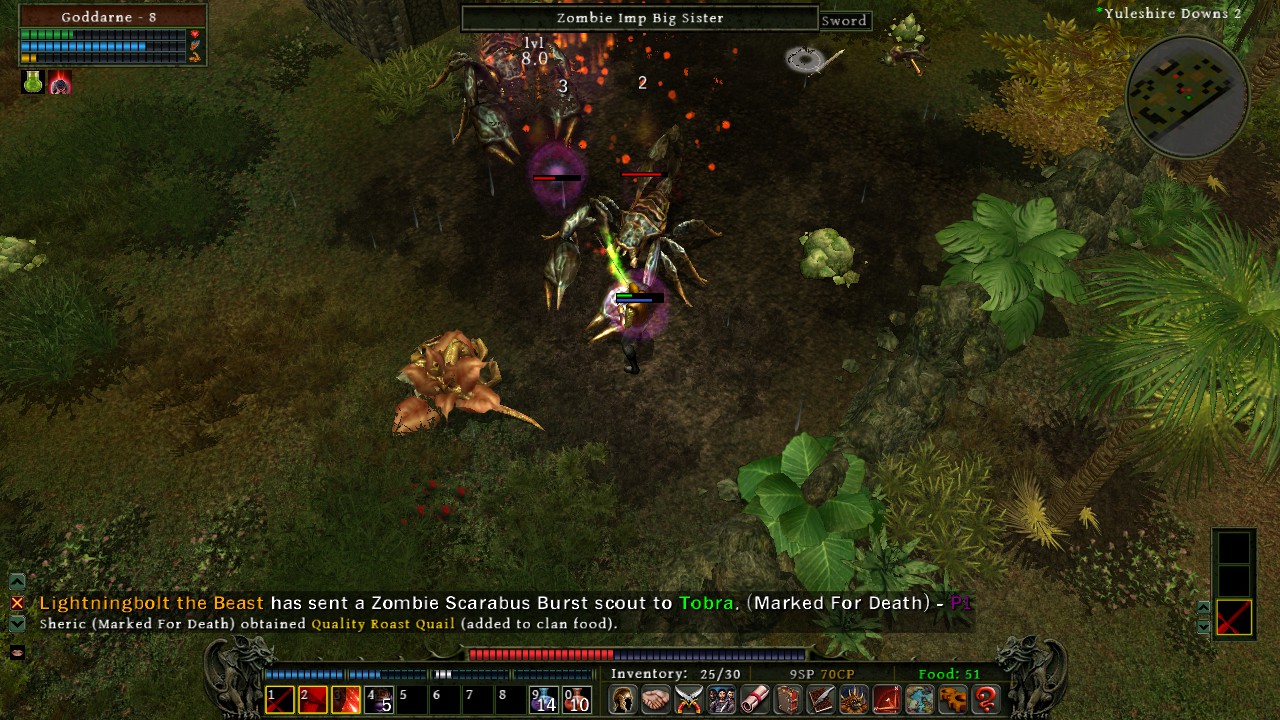 Zombasite may only require roughly a third of gig of hard drive space, but it crams a lot of substance into that small section of hard drive space.  In some ways it does play like a typical Diablo clone, but it offers so much more than that.  Managing the encampment adds elements of civilization simulation games to the equation, bringing the feel of actually having a band of survivors trying to rebuilt amidst the zombie pandemic which is not a common element in zombie games.  The NPC behavior is sometimes like trying to keep a family of Sims happy, but like The Sims the option to kill any irritating clan members is available, though not always recommended.  The overall experience is much deeper than the screenshots or a paragraph summary would entail.  Even though popularity is not something that necessary correlates with quality there is a reason why so many people have several dozen hours already logged into an early access build on Steam.  So to answer the question of whether or not Zombasite breathes new life into the zombie apocalypse, the answer is a resounding yes.