The original Titanfall was predicated with a ton of hype. The former Infinity Ward folks making up Respawn Entertainment had a point to prove and they wanted to show that they were the elite in FPS gaming. Mech games have been hit or miss, but the FPS genre wound up being a perfect fit for it. The David vs. Goliath nature of having titans and human pilots playing at the same time kept things interesting. The anti-titan weaponry balanced things out and having both a primary weapon that was generally really powerful and then a secondary weapon alongside the anti-titan weapon gave you a versatile loadout.

For me, it was a gateway game for FPSes. Sure, I’ve played them off and on for many years — but I had fallen out of favor with the genre since the N64 days and only played a handful of them in passing. The Halo franchise didn’t do much for me beyond its music, the Call of Duty games didn’t hook me outside of a brief love affair with Modern Warfare 2 and Medal of Honor stopped floating my boat after the initial PS2 offering. It was a genre I wanted to enjoy more of though, but I found the games were just too slow-paced for me. 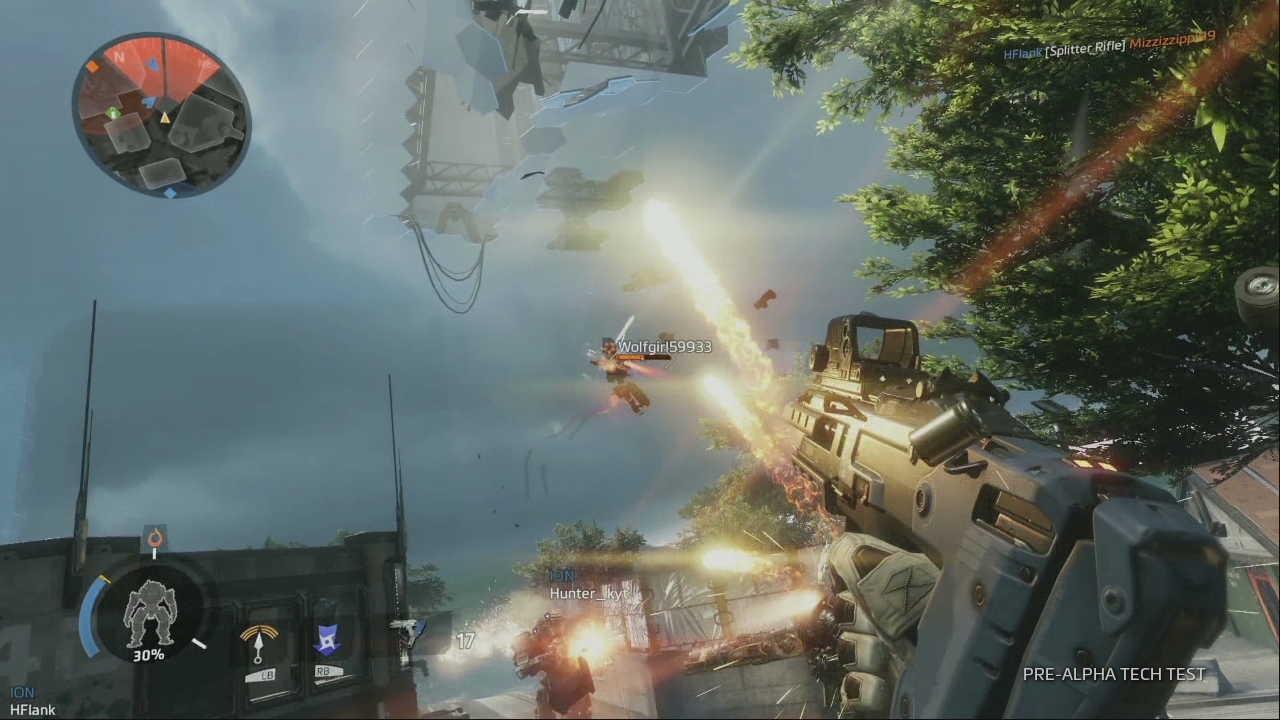 Titanfall’s rapid pace was something that clicked for me from minute one in the beta. It used a lot of platforming-centric skills and as someone who was far better at platformers than shooters, it made the learning curve far more user-friendly. It reminds me a bit of getting into a higher-end camera. In theory, they’re all going to be used to take a photo – but things like the menu system and overall presentation can make all the difference in the world towards getting you to want to shoot. Titanfall gave you shooting, platforming, and a bit of tower defense as well. It didn’t give you much of a campaign, or a ton of content right away – but eventually delivered the goods in a major way.

Titanfall 2 is going to feature a campaign, alongside some revamped modes and gameplay mechanics. The open beta is live and this is the first chance I’ve had to try out some new modes and the new grappling hook. The “tech test” just gives you pilot vs. pilot (a later addition to Titanfall), bounty hunt, and amped hardpoint modes. The grappling hook allows you to not only swing behind enemies to attack them, but also go from building to building much faster. It’s a great way to catch up if you need to get to the evac point quickly too. A slew of new character classes are in as well and Titans have been revamped too. Originally, they blended power and finesse – but the two versions featured here are largely power with one using a rapid-fire gun and the other using a slower, but super-powerful one. 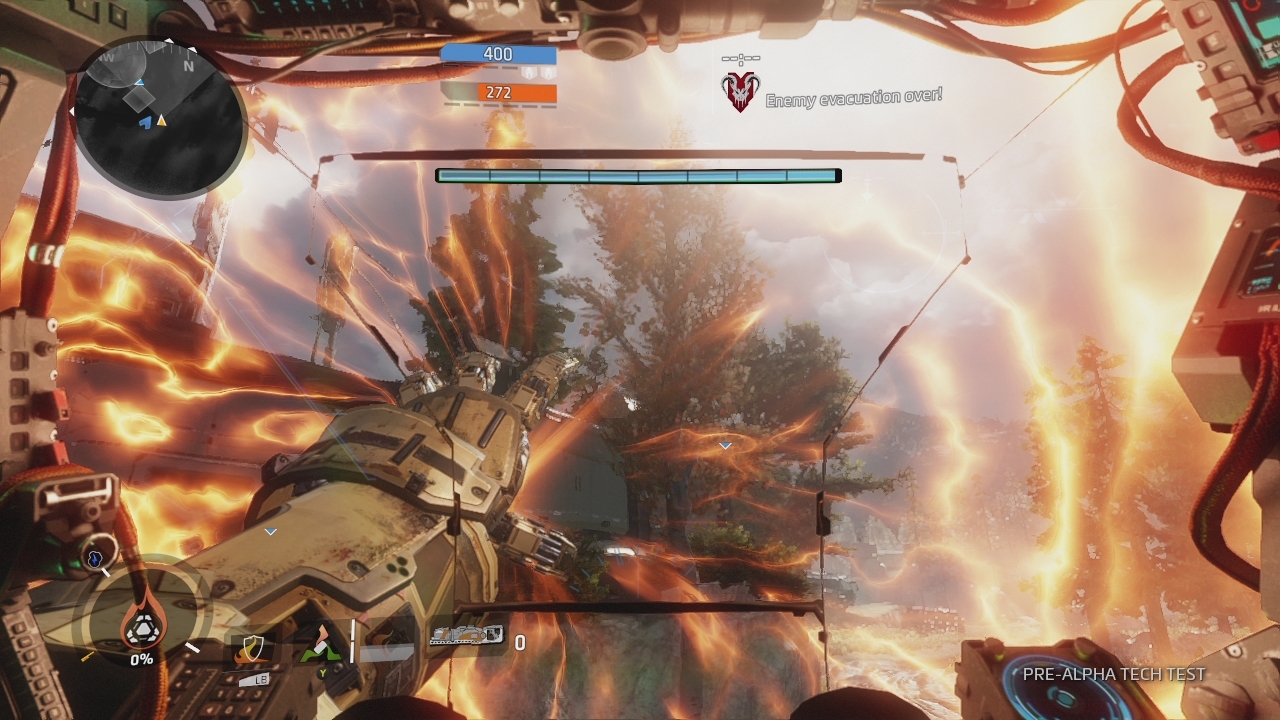 Anti-titan weapons return, but at least right now, you don’t have a sidearm to use – only an anti-titan and a primary. This is fairly jarring because it completely changes how you can play this game compared to the first. With TF 1, you could have a slower, but really powerful weapon in a primary slot, then give yourself a backup pistol and then a rapid-fire anti-titan weapon that was good against anyone in a pinch. Having only two weapons means you need to be a lot more careful with your choices since you don’t have as much variety.

Fortunately, if you get a bad pick – or just a loadout you don’t like, you can change it. Much like Overwatch, you can change things up after every death. This encourages you to try every class out and see which one fits you best. Unfortunately, your weapon selection is quite limited in the pre-release tech test version of the game. You will definitely be able to unlock more guns in the full game, but overall weapon selection isn’t really impressive in this state. The new amped weapons are more powerful versions of what you already have, and are activated by pressing left on the d-pad – the same command used to summon an anti-titan weapon in the original. Now, you get that weapon by pressing Y/Triangle, the same button used before to grab your sidearm. 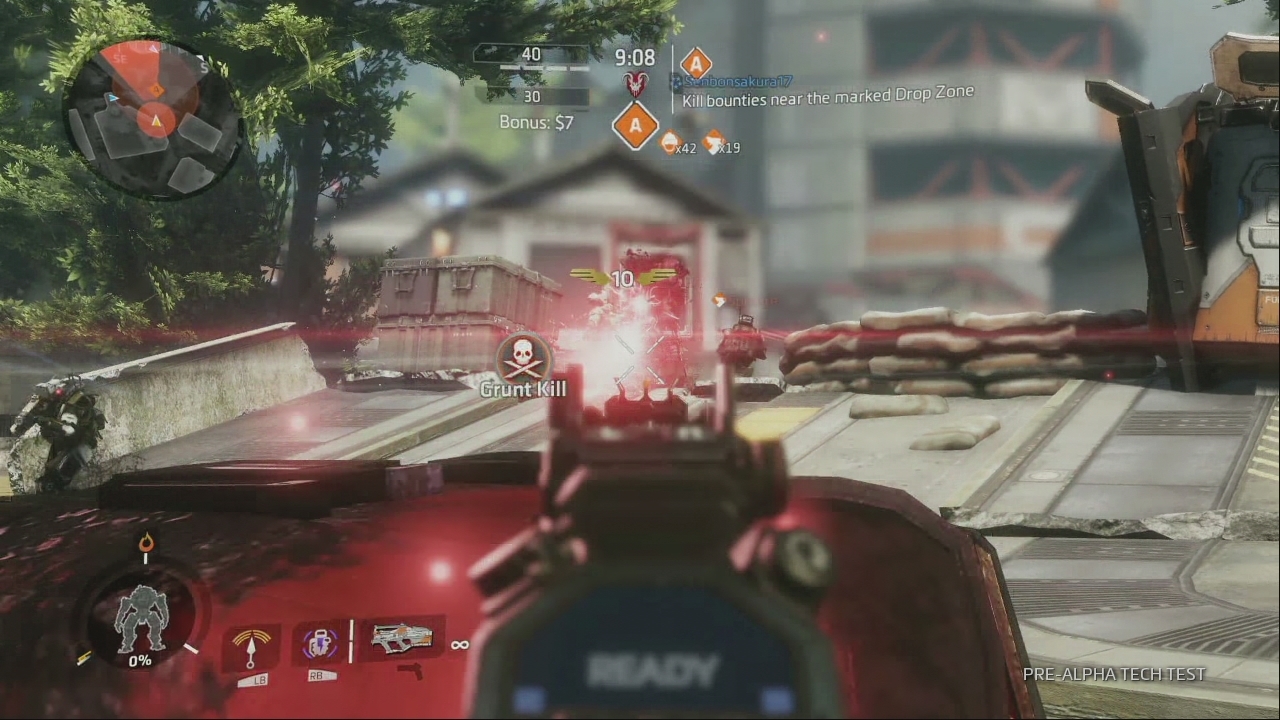 Bounty Hunt, Amped Hardpoint, and Pilots vs. Pilots were available on week one. Bounty Hunt is basically Attrition mode from the first game, but with zones you can go in for cash bonuses. You may also wind up with a specific Titan target, and doing well in these zones gives you more money that you can bank for yourself. Banks can be camping points though, so you can’t just saunter near one and expect smooth sailing. With this seemingly taking the place of Attrition mode, hopefully there is something done to discourage that because it does make you just not want to try to bank anything.

Pilots vs. Pilots is the same as it was before and the truest test of one’s skills since there aren’t any titans involved, so it’s just down to you and your team against another team. Amped Hardpoint gives you the same “control three areas/defend three areas” setup as before, but with the addition of amped weapons. All told, the limited mode selection available here is fine – but the lack of Attrition does hurt things a tad. The fast-paced gameplay returns though, and has gone through some big changes for titans. While the pilots feel about the same outside of the revamped loadouts, titans feel quite a bit different. They’re a bit slower, but do more damage and their aim seems more accurate here. 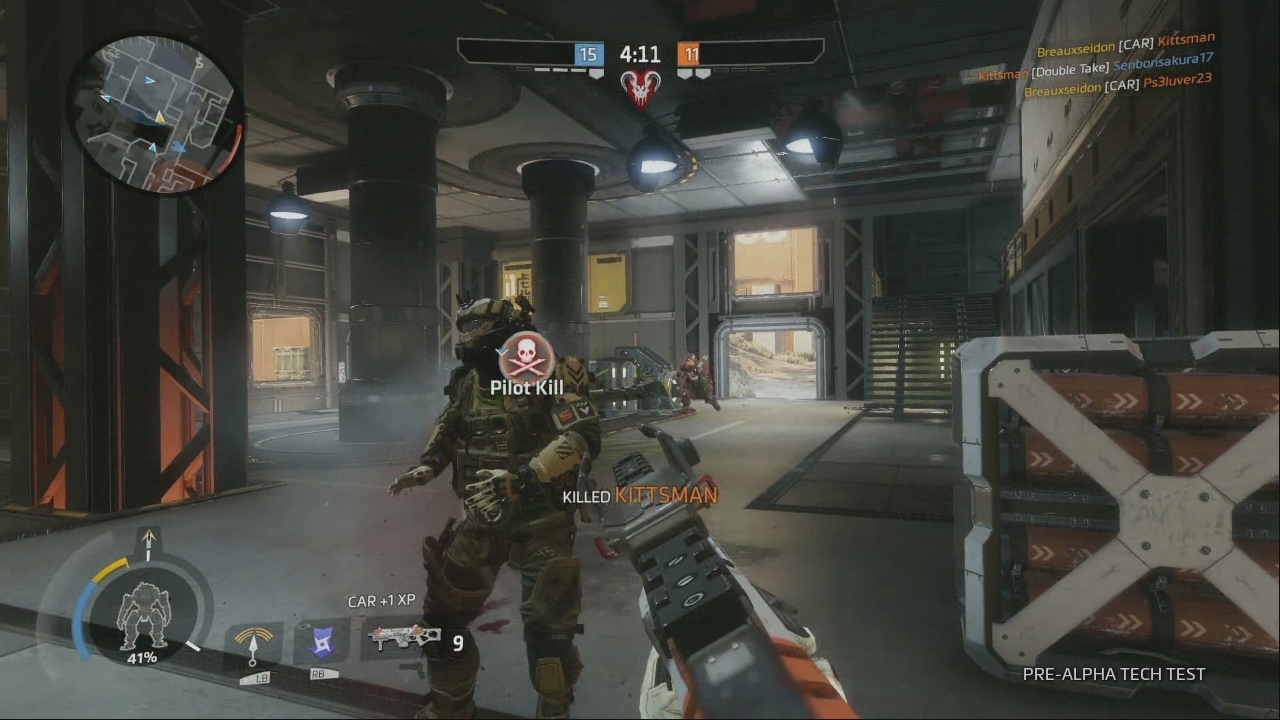 This is the first entry of the series on the PS4, so getting used to things with the DualShock 4 took a small amount of time — but not a lot. Using the symmetrical sticks was as natural here as it is for other FPS games, and the PS4’s triggers may not feel as good as the Xbox One pads, but they do work quickly. Otherwise, everything transfers over easily from the regular Xbox-style controller. So far, Titanfall 2 seems fairly solid on either console and I didn’t notice any huge graphical or performance differences between versions.

The first week’s tech test is over, but it returns on August 26 with a new map and mode — so we’ll have a far better idea of how the big picture is shaping up then. Right now, what’s here feels a bit underwhelming compared to the original — but it’s also looking at a fairly small snapshot of the total game. Titanfall also took quite a bit of time to get truly amazing — so while the foundation was always there for something that was top-shelf, the content level just what was FPS fans expected. Titanfall 2 comes out on October 28 and is set to be more feature-complete than the original was on day one.