You’re guaranteed, on almost every occasion, to find some rather catchy or compelling music in an on-rails shooter. While the notion of a satisfying soundtrack has been fairly standard for the genre since the early days of Gradius, R-Type and many a Star Soldier spin-off alike, it wasn’t until [now former] Sega developer Tetsuya Mizuguchi — together with his team at United Game Artists — brought Rez to the table that the notion of music, and sound furthermore, felt wholly more adept and thus creatively assured for a game of this caliber. Nearly fifteen years ago for the Dreamcast originally (the game not seeing a North American release until January of 2002 on the PS2), Rez quickly became a community talking point as much a go-to for “shmup” followers — garnering its own cult following shortly thereafter not just for its implementation of sound as well as the unique use of player input and reaction, but also its stripped-back art-style and geometrically abstract aesthetic.

Rez might not have been the first title to invoke that feeling of being “inside” a computer system, but its three-sixty scope of interaction – and emphasis on keeping up with everything going on around you – despite its linear multiple-phase direction of play, gave Mizuguchi’s influence from synesthesia, Kandinsky-led art and electronic music that much greater dynamic. Fitting then that Rez, after getting a HD face-lift from its time on the Xbox marketplace in 2008, is now taking the next pivotal step in immersion as it debuts on PlayStation VR later this year. Officially declared as one of the PS VR’s launch titles, Rez Infinite may not be the only title offering an illusionary feeling of flight when the headset lands October 13, but Infinite’s greatest [potential] strength lies less on its enhancements and more on maintaining the original title’s audible and visual status quo. 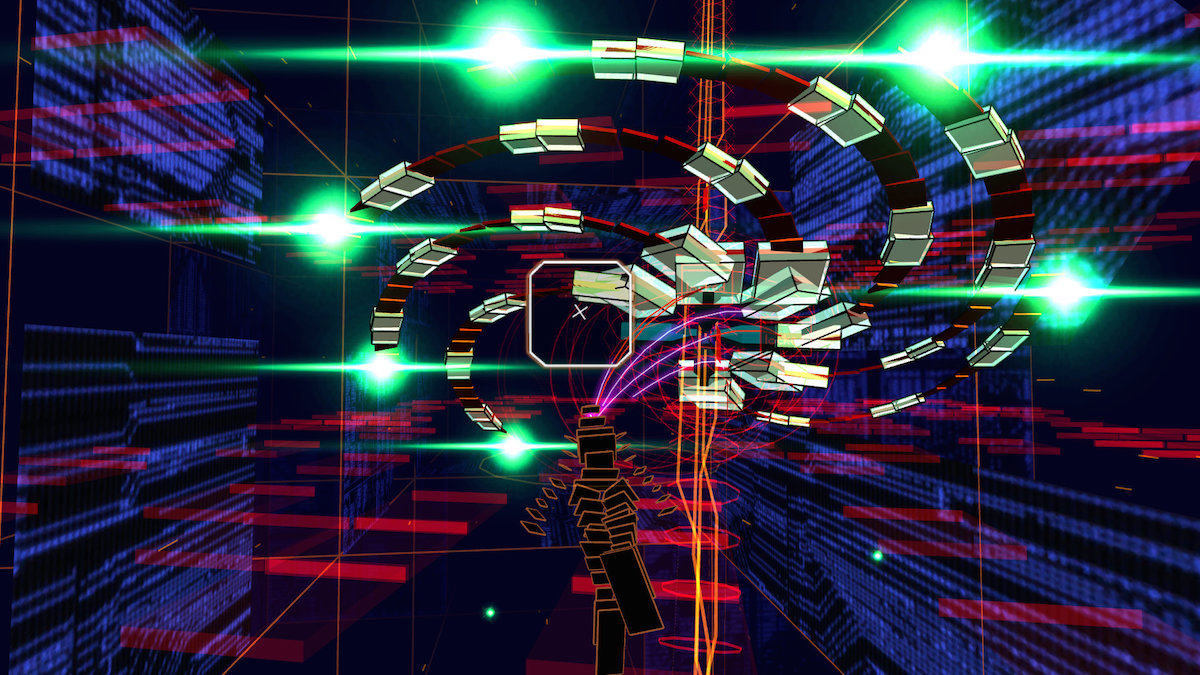 Rez remains, even now, a title that’s withstood the unforgiving burden of time, not simply because of its minimalistic attire, but for the way the player-made structuring of sound (and music to that extent) always feels illusively unique, despite its rather staged and structured waves of hostile targets. Infinite boasts to have finally hit the gloriously expected 1080p/60FPS threshold and while this may come as a requirement rather than a desire for the current flock of modern-day action-focused titles (let alone VR offerings), Rez’s justification is that it’s never felt like a game needing that extra loft of performance to feel any more enticing. Sure the added resolution and increased frame-rate is a welcome addition, but much like the original, Infinite still boasts the same player-generated carving of sound as it does that memorable use of surrounding space.

Rez Infinite takes what the original carved out – the ability to look in any direction; to aim all around as opposed to merely what was in front of you – and uses that as the vessel for its VR implementation. In VR mode, you take the reigns of the simulated player-avatar and as such the action imposed is consequently a lot closer. As such, the game shifts from that commandeering third-person perspective to that of a first-person variant, thus the need to keep tabs on hostiles making sweeping passes either side of firing deadly projectiles up front becomes evermore critical. And if the game’s updated implementation of sound to that of a fully 7:1 surround-sound mode won’t grab the player’s attention, those moments of slowly flying towards an impassable wall – your only way through is to quickly, anxiously fire at the necessary weak-points – will surely help VR break the obvious barrier between simulation and pseudo-reality down.

But Infinite’s greatest benefit is that its integration onto VR doesn’t come at the potential cost to its player’s rather-more nauseous sensations at seeing such a blistering array of colour and motion lambast one’s very perceptions. Where titles like Overload or Sublevel Zero could throw up and have thrown up (pun unintended) a precarious feeling of unwell in the stomach, or even the likes of Resident Evil 7 may, just may, be a little too close for physical-mental comfort, Rez Infinite makes sure to balance immersion with exertion. Boss battles will, inevitably, keep to their multi-patented, multi-form complexity – especially in later parts where the game’s three-sixty degree movement of aim is required, as much desired – and indeed later phases in certain stages envelop the player with hectic surges of colour, form and less-than-calm waves of enemies. But keeping to its on-rails dictation of progression means players can focus their efforts (as much their stomach acid’s) on surviving the threat, rather than environments that, at their most energetic, fly past at blistering pace. 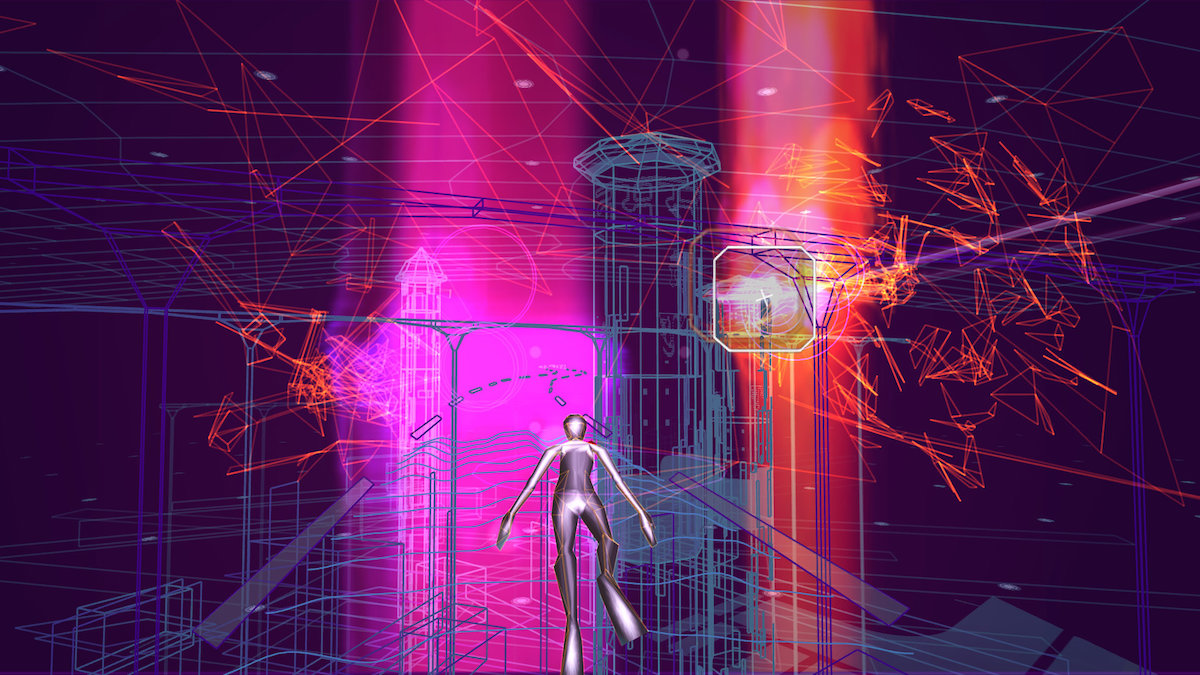 Rez’s likability in much its visuals, let alone the fact it’s one of the more unconventional on-rails shooters out there still, is based in its level design – from a purely structural stand-point – keeping to the philosophy on gradually building momentum and slowly introducing players to the rules at play. Each stage in its VR component retains that start-from-scratch building of the palette. The way sound is a result of player stride, means that players will feel less star-struck by the game’s latter surges. A key challenge all VR games need to get past and it’s pleasing to find Rez has dodged that likely pitfall in divorcing itself from its original mandate…for the sake of some maximum amount of interaction. Overall, to take this from out of VR’s focus momentarily, it’s great to see a cult favourite in Rez given a viable platform to shine once more.

On its debut, Rez quickly proved itself to be one of those respected (if not wildly or lucratively commercial) experimentations of sorts on a genre built originally on the drive to reach a set goal and conquering what felt like impossible odds. Rez Infinite might not be the title aiming to strive on its world-building or indeed make players feel truly part of the environment they’re witnessing, but at the very least makes great strides on treating VR technology as more a journey rather than purely a sensory experience. That’s not to say its minimalistic visuals or its electronic soundtrack are any less intoxicating, but rather than thrusting this into the confines of a head-set peripheral, Rez Infinite aims to complement VR’s conflicting extremes of static-post “involvement” and truly interactive means — thus, giving virtual reality, as a platform overall, a more viable selection of titles on show.