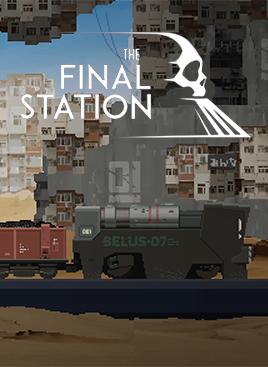 More often than not, some of the best moments to be had in The Final Station are when not much is directly happening. That may sound like a self-defeating statement to make — and kick off this review more alarmingly — and said declaration its not without a degree of reason which I’ll get to. But given this is a stylized pixel art title as well as (if you’ll pardon my putting the blunt hat on briefly here) yet another survival-orientated, post-apocalyptic tale, there’s a discernible quality to the way developer Do My Best take precedent with more than just the abject focus on crafting and scavenging. It’s the kind of initial impression that underscores why I’ve found myself so invested in titles like Poncho or Mushroom 11 for more than just their gameplay. Games that care for scene they’re setting, the tone they carry.

Like those similarly low-key, indie titles, The Final Station is much more about alluding to a World gone awry and…well…horribly wrong, as opposed to out-right spelling it out. More prominently, it makes sure to sprinkle that with gameplay mechanics throughout to avoid this being some 8-bit alternate to a walking simulator and more a lingering bread-crumb trail in a World of conflicting natural and artificial beauty. The dynamic between managing a train — billed as possibly the last working locomotive in the World, not to add any pressure there — and leaving these somewhat comfy confines to look for supplies at the game’s many stops, does at least offer a proposition for variety in gameplay too, but when limiting your title to both two dimensions and a limited amount of pixels, does enjoyment end up factoring into each self-contained moment, as much as the immersive sort?

There’s no denying, for starters, The Final Station does a great job at dropping the player straight into the thick of things; never really offering an ounce of explanation as to either the troublesome amount of blacked-out, white eye dilated humanoids out to kill you, while immediately presenting the World of The Final Station as this desolate and hauntingly isolated state-of-play to begin with. Much as this may go against my tastes, there’s a Dark Souls-like philosophy to uncover, not so much with its visuals, but with both its drip-feed story-telling as well as its pacing. Throughout your ventures — in-between cross-country locomotive treks where, for example, a bomb might go off in the distance or something else equally evocative might comprise the game’s next curious background landscape your train runs parallel with — the meat of the game’s exposition is found in the likes of underground interiors and obtainable hand-written notes scattered throughout that shed light on proceedings before and during, what the game dubs, the First Visitation. 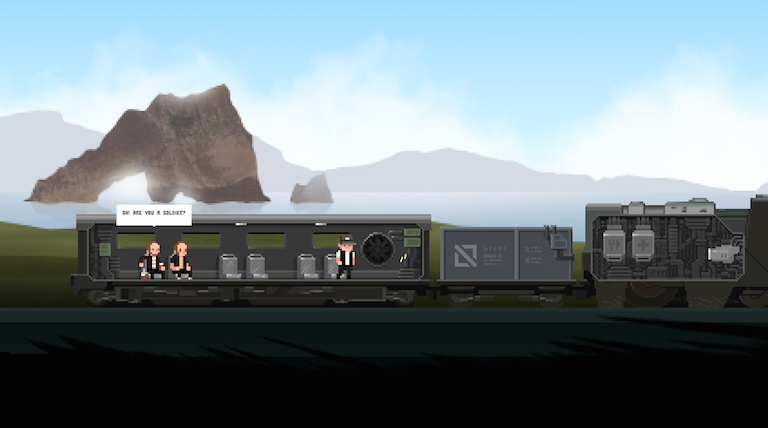 Like the Souls games, there’s no real definitive, concrete answer as to the nature or even string of events to why the World is the way it is. There’s something definitely sinister, man-made or otherwise, and in early proceedings the mystery and anxiety of the game’s industrialized, grey-scale aesthetic intrigues. A feat more commendable given the limiting art direction and the fact this is essentially a 2D side-scroller. Hence, it’s up to the player — if invested — to deduce for themselves the relevance of certain item placements and/or the dead bodies of former civilians that similarly dot themselves about the many stations the player will, in a linear fashion, be required to venture through in order to carry on. For the gameplay itself, The Final Station divides itself into two contrasting styles of play that cover, if not thoroughly or with much complex systems, both survival and a Souls-like stick-or-twist gambling of belongings.

During your train journey, your objective is to keep your passengers alive and this is accomplished by keeping both status bars, for hunger and health, away from empty. While the method of execution is by no means sophisticated — merely requiring you offer a unit of food or a med-kit you’ve [hopefully] acquired in the station segments (which comes next) beforehand. The train segment’s challenge, you could argue, isn’t so much down to the management and administering of supplies, but instead emerges by way of easy distraction in keeping your train in working order. It’s this factor where players will find they let their guard down the most and the deceivingly easy way in which players can go into panic mode feels like a clever and deliberate inclusion by the developers. 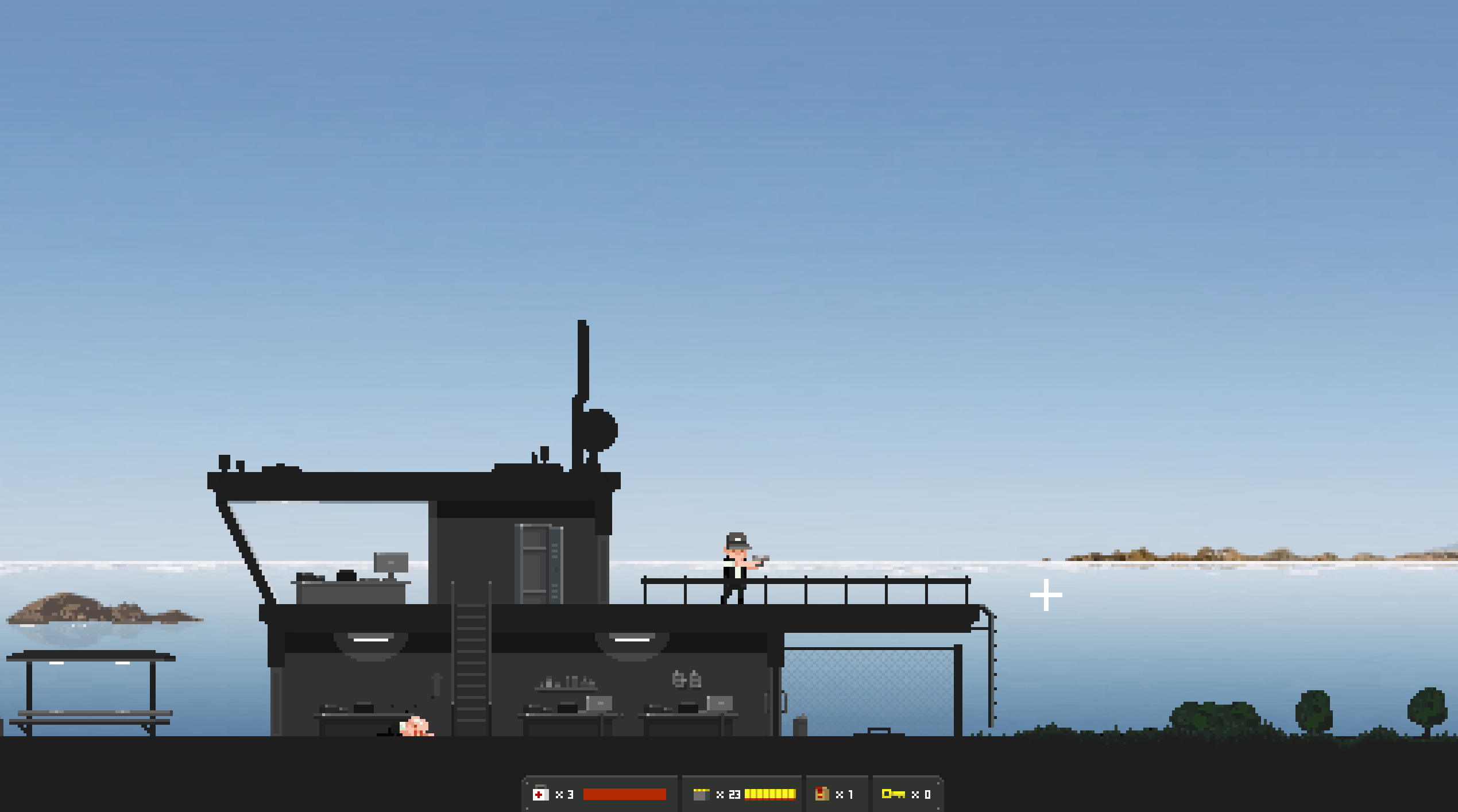 Such is the ease at which one can get so focused on passenger dialogue — it too providing tiny pieces of potential exposition — or using the carriage’s communication system to contact certain NPC’s (of which offers a possible, though weakly implemented, dialogue option) the difficulty feels almost the reverse of manufactured; player-made and perhaps reliant on the player’s curiosity about the tale slowly unravelling before them. No doubt Do My Best carve out a clever means of challenge here, though this doesn’t excuse the rather simple method of problem-solving that comes by either tapping a button or readjusting a value to return a once precarious status to all-green.

So it’s the latter half of the game’s core gameplay, in the stations themselves, that provide the better all-round delivery of challenge and enjoyment. If not, sadly, a means of decision-based punishment and consequence. With the primary objective in each case requiring you to find an access code to get past each station’s blocker, you’re provided with an opportunity to gather supplies and materials which you can then craft to make additional items as well as ammunition for the game’s series of weapons, of which include the more tactile handgun to powerful, multi-strike shotgun. Within these side-scrolling segments, building interiors are initially blacked out and offer no clue as to what, or potentially who, might or might not be lurking and it’s the games Souls-like influence again that comes strongly into play here.

There’s no doubting there’s a likeable dose of anxiety and anticipation to be felt as you weigh up the option on whether or not to open a particular door and the game does well in disfiguring a player’s time at a station from a once calm, confident stroll with plenty of bullets into a hectic flinching backtracking of cursor-aiming — now several bullets and a med-kit more than likely down from but five seconds ago. Anyone who’s found themselves forced into little tactical retreats in a game like Bloodborne will emphasise with the way these moments often play out. But the fact med-kits (or a lack of) carry over to the following train segments, require you to think several steps ahead and deduce what, in the long-term, is the best strategy to keep both yourself as well as your passengers safe. 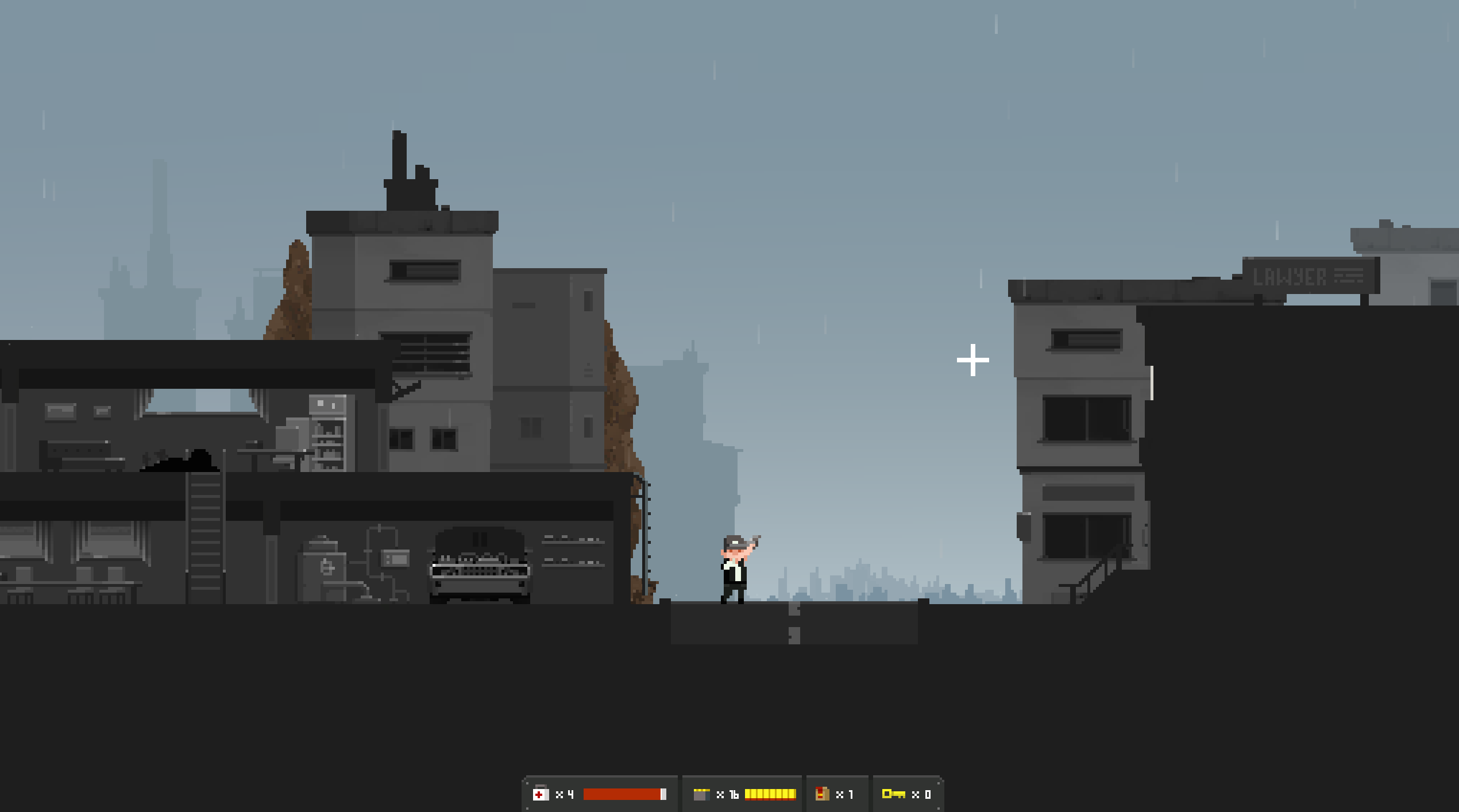 What’s more, the fact you can find survivors hidden away in each station’s minimalistic labyrinths means that you can increase your load for a possible reward by way of each passenger [that lives] offering up extra money or materials upon arriving at dedicated settlements. It’s here where story-quests are obtained and you can stock up on supplies before heading out on the next part of your journey. Thus, the cycle repeats and while level design does deviate at points to offer some surprise twists here and there, most of The Final Station‘s structure follows this two-phase objective on survival and scavenging. In this instance, not only does it upholds a decent risk:reward style of play but also makes player choice feel somewhat consequential (in the long-term) should it go wrong.

Sadly the game doesn’t advance this mechanic into a similarly short-term variety with say, death, should you unfortunately fall at the hands of one of but a multitude of varyingly apt zombie-like foes — meaning the benefits/rewards can often outweigh the risks involved. That said, the precarious nature to exploring each of the more deserted, corpse-littered stations and settlements provides a sufficient level of entertainment and intrigue to prevent the formula falling stale and it keeps each visited room feeling, tentatively, like your last. Above all else though, there’s a delightful curiosity to be found in each settlement’s derelict and decrepit layout as a former town/village/settlement. For an indie game of this scale and structure, it’s almost unfathomable how strongly the desaturated look and feel of the post-apocalyptic aesthetic comes across here. 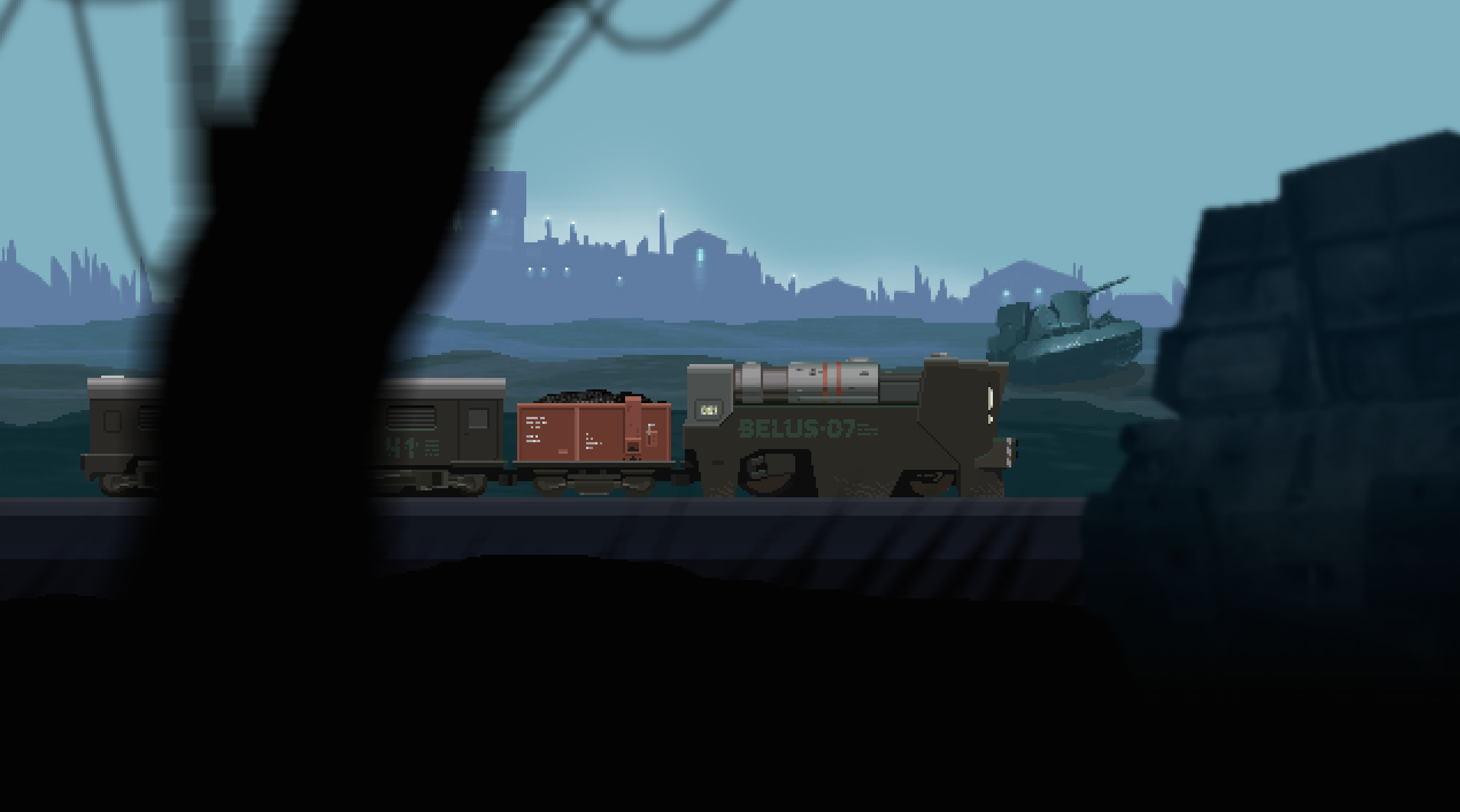 There’s few complex systems in place to either discover or manage and while that may feel like a misstep, Do My Best live up to their namesake by setting the scene and giving even the most basic of pixel graphics feel like something far more grandiose and important in the wider scheme of things. The Final Station does a remarkable job at leaving a mark with its chosen aesthetic and subtle narrative — peaking one’s interest with this particular post-apocalyptic not-zombie infested World, it’ll be easily remembered above the mediocre allotment of survival titles out there at present. Overall, The Final Station is a welcome breath of fresh (if desolately murky) air and stands out through its interesting mix of platformer and survival mechanics — carving out a game that’s entertaining but cunning too.