How many lives is too many lives? As it turns out, the answer is “two.” I get one life, you get one life, we all get one life and that’s the lot. Starr Mazer DSP gets around this (unfair, artificial) limitation by populating its horizontal-shooter world with dozens and dozens of pilots with their own individual ships. The death of one pilot sees a new one slotted in place, and if that means you’ll need to get used to a different weapon loadout on the fly then that’s just part of the challenge. On the plus side, the crew is made up of the pilots you hired, so their different skills and weapons shouldn’t come as too much of a disruption.

Starr Mazer DSP is the prequel to Starr Mazer, a hybrid of point & click adventure gaming and horizontal shooter with a healthy dose of procedural generation in both aspects. Unlike its still-in-development sequel, DSP is a pure arcade shooter with lighter procedural aspects and a massive squadron of heroes to choose from. Each game starts with you buying as many heroes as you feel like paying for, then blasting your way through the alien-packed levels and collecting as much cash as possible so the next time through you can hire a bigger, tougher squad. 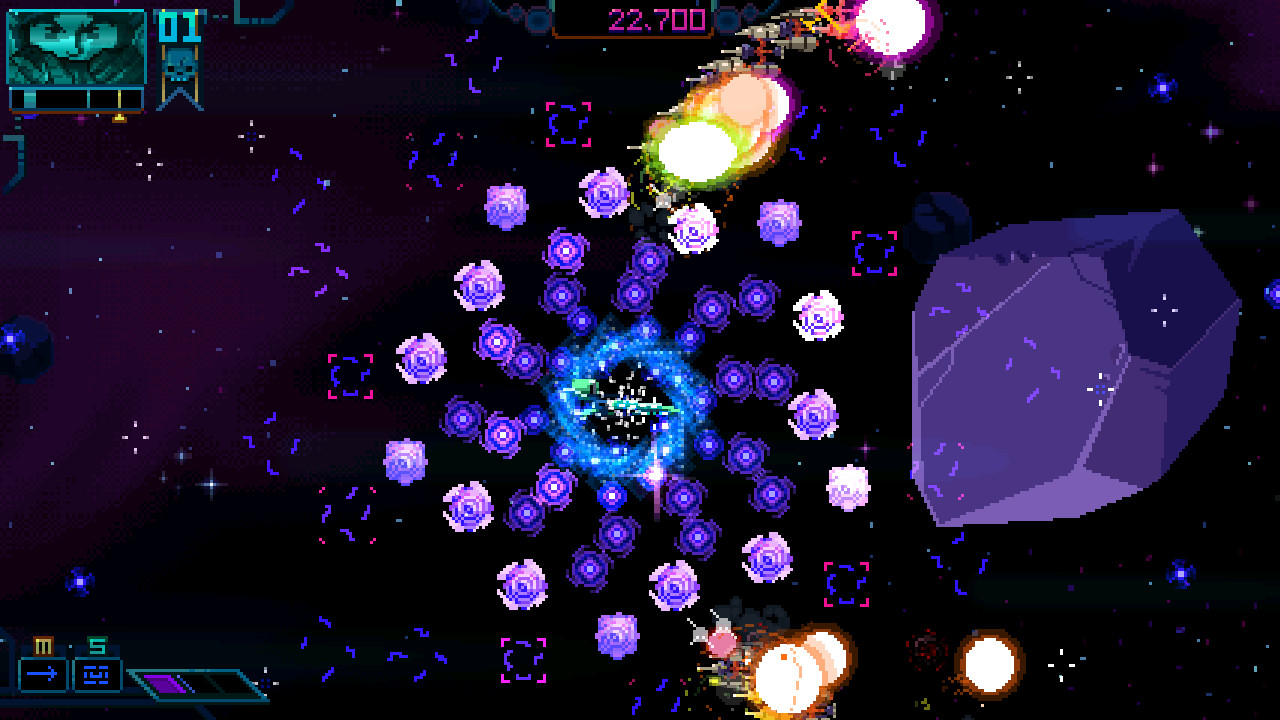 The basic flow of Star Mazer DSP is less about dodging bullets than swarms of alien enemy G’ell, and this ties in directly to keeping the gun fully powered, energizing your secondary weapon, and earning enough cash to buy stronger pilots on the next attempt.  Each time you head into the game from the start screen it gives you three random low-power ships and a bank account of zero.  Enemies fly into the screen in chains, and clearing a chain drops a small crystal.  Bigger enemies and tougher chains drop bigger crystals, and it doesn’t take long for the chains to become densely-packed swarms that try to overwhelm you by sheer numbers.  Shooting and dodging isn’t overwhelmingly difficult, but the tricky part comes from trying to manage the crystals.

A little crystal isn’t worth much, but a little bit of juggling can fix that. Each ship has a letter grade, A through E, rating its magnetic attraction to the pickups.  Use the ship’s attractive ability to guide one small crystal into another and they fuse into a bigger one, and you can do this several times to change what would have been eight individual mini-crystals into a giant 10,000 point mega-pickup.  Not only does this do excellent things for the bank account, it also fills up your weapon’s energy gauge.  The gun powers up twice, with the first level being a freebie no matter how low on energy you get and the next two making the primary shot bigger and faster.  Levels one and two stay powered up as long as you want them to, while level three drains unless you keep it topped off with crystals.  Keeping the gauge full is made a bit more difficult because the secondary weapon can be used as much as you like so long as there’s power in there.  What this means in practice is that a thick swarm of enemies becomes a choice between diving in with all weapons to generate a pile of crystals that you can grab to keep the firepower strong, or hanging back and trying to lure the drops into merging for a big, fat payoff.  The enemy swarms get you a decent score, of course, but the biggest profit is from crystal-herding. 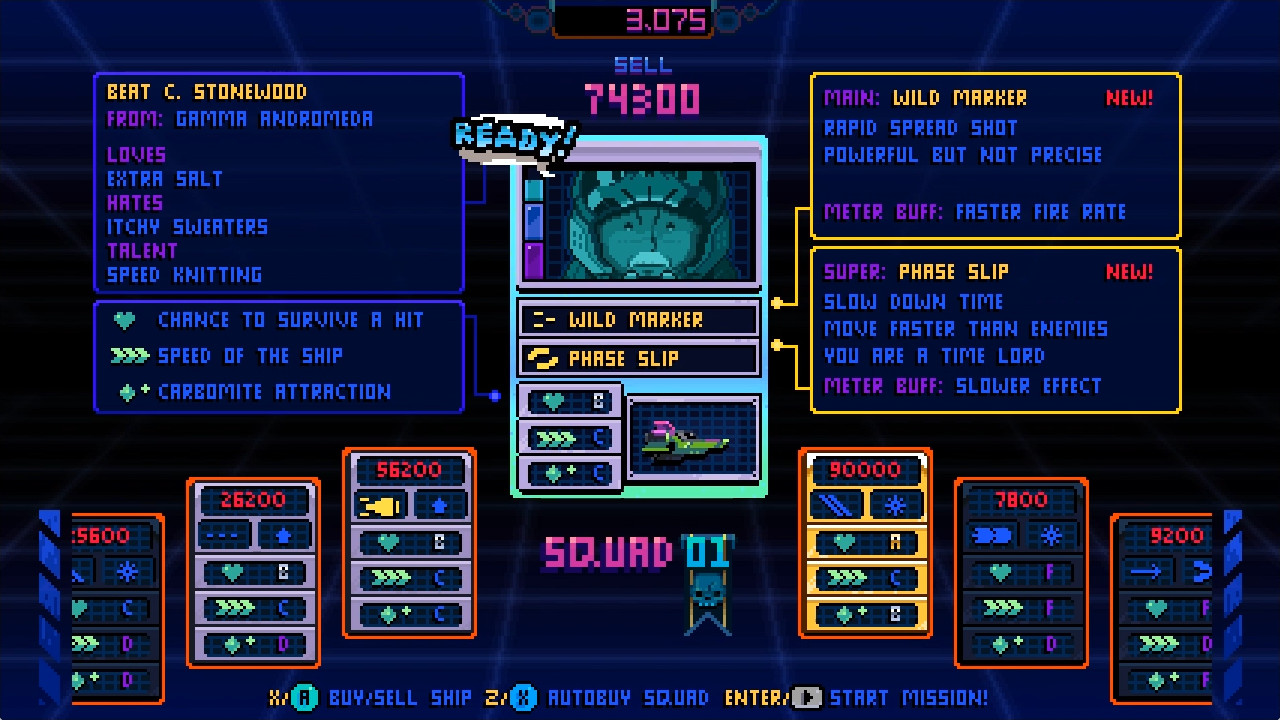 The money piles up quickly, and with a few decent games you’ll earn a generous nest-egg to afford hiring from the random selection of pilots in the expensive tiers.  Each time you start a new game the bank balance is zero, and money carries over from one round to the next so long as you don’t quit to the title screen, allowing you to either splurge your savings on a powerful squadron or send out a single pilot on a suicide mission to pad out the bank account.  Different pilots have their own weapon loadouts and a letter-graded set of three stats governing speed, magnet strength, and the strange ability of survival.  Not dying is actually one of Starr Mazer DSP‘s weirder quirks in that there’s always a chance to shrug off a hit, even if the odds are very low.  There’s a gauge in the upper-left with a line zipping back and forth, and if you take a hit while the line is in a filled-in section your ship shakes a bit and keeps on flying.  Of course, the odds of surviving the next error in judgement are that much less as the shaded-in area that saved your butt gets erased, but it beats dying.  Once a pilot is gone they’re gone for good, until your squadron is decimated and it’s time to hire a new and enthusiastic group to carry on the battle. 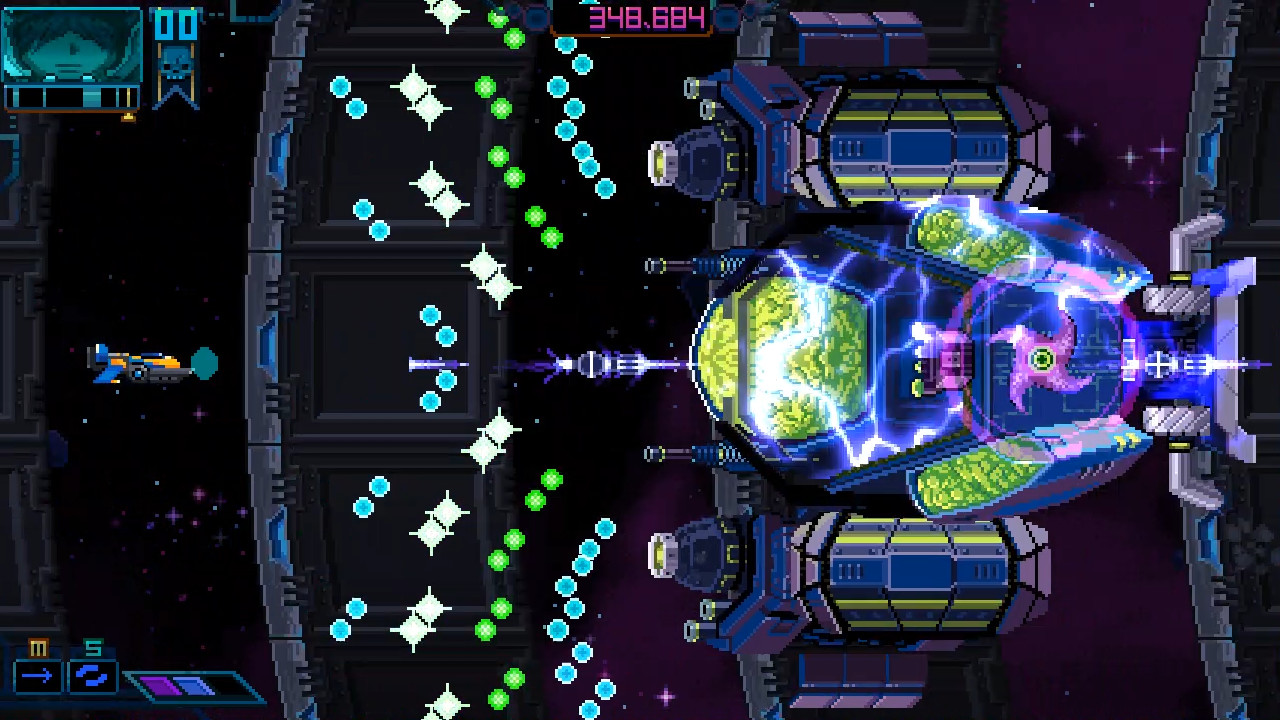 Or at least as much of the battle as is complete yet.  Starr Mazer DSP is Early Access and there are still many levels and features to go before completion.  The stability of the current build is excellent, and I haven’t seen a single crash in all my play time, but the road map is packed with plans for features, levels and overall polish.  More generic pilots as well as unique ones with exclusive ships, Act 1 will get more attack patterns, Act 2 will go from being its current early-sketch version and Act 3 needs to be created from scratch.  More weapons and ship types, a better UI to display what the loadout you’re selecting actually does, and even voice over work for more variation in pilot personalities.  It’s a lot of work left to do on an already impressive shooter and that doesn’t even take into account the endless tweaks and balancing that’s always part of Early Access.  In its current state, however, Starr Mazer DSP leaves no doubt that these upgrades are going to turn the fantastically fun pixel-art vertical shooter from simply being really good into an incredible throwback to classic arcade action.