Phoenix Wright: Ace Attorney – Spirit of Justice is available now on the Nintendo eShop, and if you buy it before next week you’re going to get a nice little bonus. Those who purchase the game by September 14 will receive a costume pack completely free. The pack includes the Furio Tigre outfit for Phoenix, a schoolboy outfit for Apollo and a waitress outfit from the classic french restaurant in the series, Trés Bien, for Athena. If you don’t get the game in the first week don’t worry, the outfits will be available for purchase in a costume pack for $0.99 after September 14.

For those looking to get a little more courtroom action after completing the game, you can look forward to two short stories and a sixth full-length case to be released as DLC every Thursday through September. The first extra story will be released on September 15 for $3.99 and includes a free 3DS theme. The second will be out September 22 for the same price and will also include another 3DS theme. The final and longest of the three will be released September 29 for $5.99.

Read our review here and check out what the three costumes look like below: 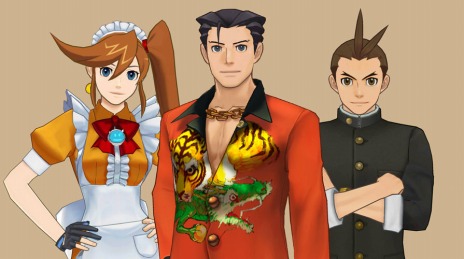