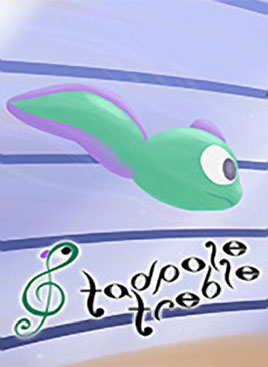 Music is usually treated with an all or nothing attitude when it comes to video games; in most cases it’s bland and forgettable, or it’s treated as the main gameplay mechanic in games such as Guitar Hero. Tadpole Treble is one of the first games that falls into neither of these categories, as it’s a music-centric game that would still be a game without the music. BitFinity games has managed to create a game where the gameplay and the music are equally important.

Tadpole Treble is a perfect example of taking an old dog and teaching it some new tricks.  The old dog in this case is auto-scrolling games, a genre that is on the verge of being an oversaturated market, but BitFinity’s innovative game design manages to make Tadpole Treble a game that is anything but “a run of the mill.” What sets Tadpole Treble apart from the average auto-scrolling game is the music and this is apparent from the first moment of gameplay. You control Baton, a newborn tadpole, down a track that is illustrated to look like a blend of a cartoonish river and lined sheet music. Emulating the staff lines seen in sheet music is not accidental, as Tadpole Treble’s entire gameplay structure is built on music. In each level, the enemies and obstacles take the place of where the notes would be on normal sheet music, and they are placed in-sync with that level’s theme song. Tadpole Treble’s gameplay makes it feel like your are guiding Baton down a river of music, everything from the instrumentation to the tempo is meticulously represented in the level’s look and design. This mix of music and level design makes it hard put Tadpole Treble in a traditional genre.

If I had to define the type of game it is, I’d say it’s a mix between an auto-scrolling platformer and a rhythm game, but this doesn’t really do the game justice. It’s almost a reverse of a traditional rhythm game, the level design is dictated by the music so you’re literally “playing” along with that level’s soundtrack. This may sound like a bit of a passive experience, but I actually found it to be a far more engaging experience than a game such as Guitar Hero, which when you break it down, is just that 90s game of Simon set to music. 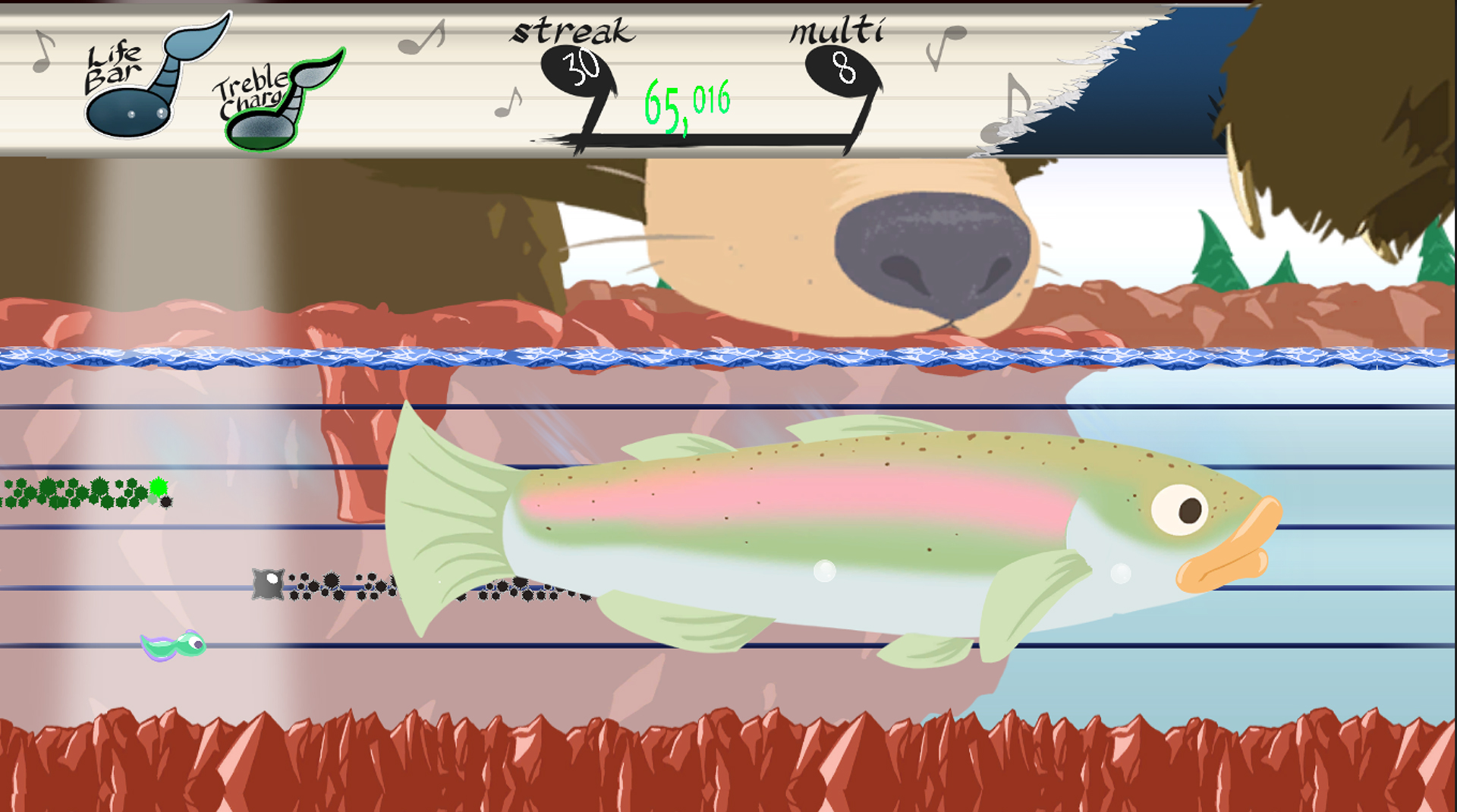 BitFinity also adds plenty of in-game elements to further engage players. Each level is scattered with pickups that will restore Baton’s health or charge her “Treble Meter,” which when fully charged temporarily gives Baton the ability to smash through enemies and obstacles without suffering any damage. There are also bubbles peppered throughout the levels which can be collected and used as in-game currency to purchase unlockables and additional content. Baton also has a tail slap ability, which can be used to slap certain enemies out of her way, but also to hit percussive notes, represented in-game as cymbal shaped flowers. These percussive flowers are placed to correspond with the song’s crescendo, hitting them accurately rewards you with a visual explosion of colors and animations that is both extremely satisfying and further immersing you in the feeling that you are apart of the music.

From a game design standpoint, Tadpole Treble checks all the boxes. Its controls are simple and intuitive, the art style is cute and colorful, and the in-game animations are smooth and often genuinely funny. BitFinity also does of great job of putting plenty of variety in the level design to keep the game from becoming monotonous. There are boss fights throughout the game which consist of a predator nipping at Baton’s heels. The boss levels are surprisingly challenging, forcing you to dodge attacks from behind while still avoiding any obstacles ahead. There are also other levels that you wouldn’t think of as a traditional boss battle but they do change the established game design, such as a level where Baton gets caught in a raging river and must move from right to left rather than the normal left to right. 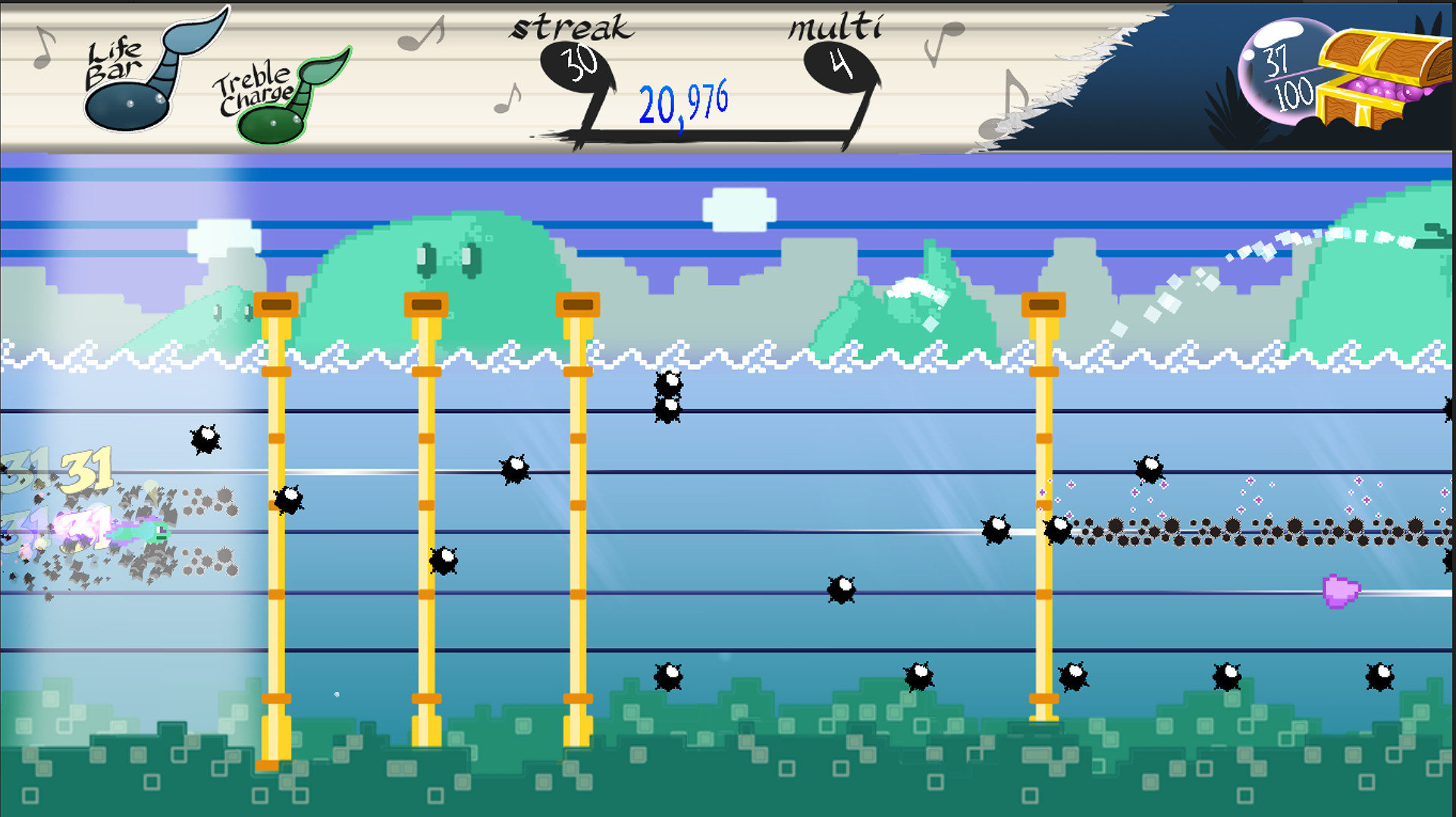 In addition to the story mode, which is not insubstantial, Tadpole Treble has a level editor mode which is just as ample. In this mode you choose everything; backgrounds, instrumentation, tempo, all are available for the budding composer. Creating your own levels and music also allows you to show people, including non-gamers, something that you’ve created in the game. This may seem inconsequential, but it is something that few games can offer, even ones that are based around creation. Take a game like Minecraft, if I were to show my mom my scale recreation of Mount Rushmore with the presidents replaced by captains in starfleet, she would smile vacantly, say “that’s nice,” and then quietly sob in the next room over what a massive disappointment I am. But if I were to show her a level I had created in Tadpole Treble, it would be something that she could understand and appreciate separately from the gaming experience. 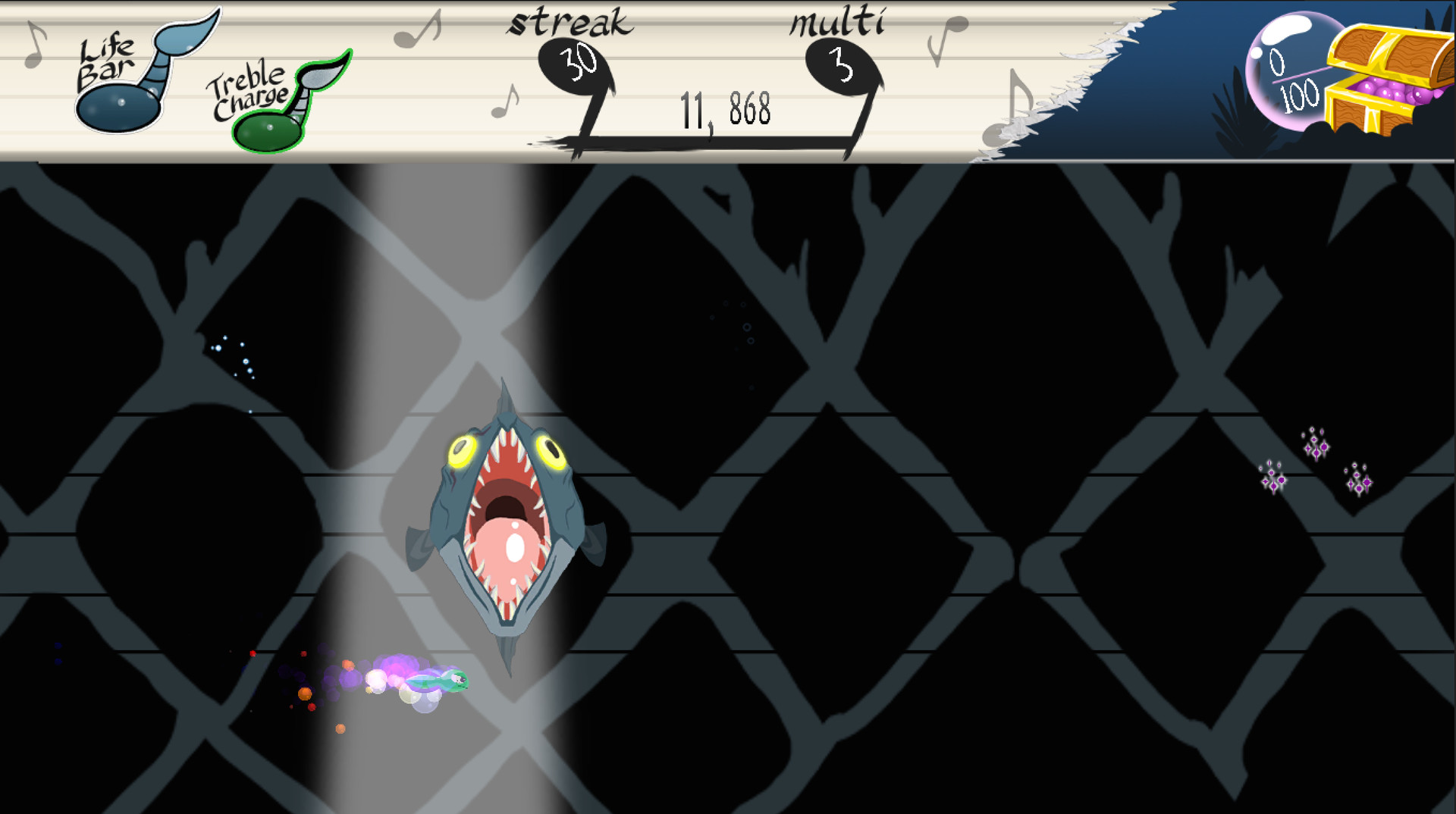 Tadpole Treble is a game built for music lovers by music lovers. Its solid gameplay forms a perfect foundation for the music, which is the real star of the game, to take center stage. The level editor, however, is what gives Tadpole Treble real staying power. The type of feature that could make this a sort of cult classic, I wouldn’t be surprised if we start seeing YouTube videos of levels built in Tadpole Treble. If you like music, you should pick it up.