The moment I laid eyes on Earth’s Dawn, comparisons to the likes of Odin Sphere and other Vanillaware games immediately sprang to mind. After all, it’s a 2D side-scrolling action game with both beat-‘en-up and RPG elements and similar art styles coming from a Japanese developer — OneorEight, in this case — so the connections were somewhat unavoidable (although Strider was mentioned as an influence as well, which also shows). Could Earth’s Dawn even come close to the level set by the cult classics that Vanillaware has created? First impressions suggest that it does indeed have a shot at reaching that goal.

Set after an alien force known as the E.B.E. has decimated almost all of the Earth, an elite team of fighters is now striking back at them. That’s the simplified version, because the backstory, as it turns out, is rather lengthy, so we jumped straight into the gameplay after some quick character customization. And it was smooth like butter indeed. Lunging at enemies with a giant blade and a gun and going right into some combos felt natural and easy to execute, as was dodging enemy attacks. It’s the type of fast-paced, energetic action that’s definitely a treat, and feels right at home among the likes of similar games such as Guardian Heroes. 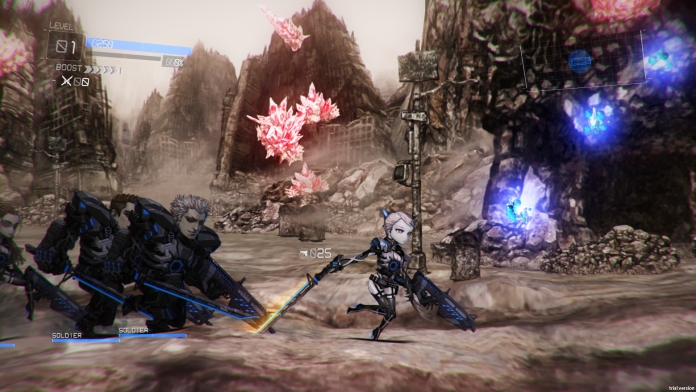 Unsurprisingly, the graphics in Earth’s Dawn are rather stunning. The ruins you head through are all full of detail, and the anime-styled characters are nice, but the real highlight was the enemy design, where each type felt unique and came off as twisted fusions of organic and robotic creatures. There are also the smaller bits of flair in the way you attack them, such as finishing moves where you rip off the gun attached to an enemy arm, which definitely gave off a brutal feeling. But after traveling through the first level with a squadron and taking down multiple waves of enemies, the best occurred at the end with the first boss, a giant, mechanical, screen-filling Cerberus. With the three heads each delivering a different attack, you have to rush in and destroy each one while avoiding their fire, lightning, bites, and more, which was equal parts exciting and imposing indeed.

A taste of the weapon crafting and skill customization closed out the demo, but as the final product will have over a hundred different skills for you to try out as you advance and rack up points based on your performance, a taste was all that could be provided. Arguably, not much about Earth’s Dawn breaks any new mold (at least, not with what we’ve experienced hands-on), but again, all that matters is being able to put out the absolute best game and excel in every area of it as best as you can. And clearly, OneorEight are giving Earth’s Dawn all of their possible effort in order to craft something that does their inspirations justice. Earth’s Dawn is set to come out this Autumn for the PS4 and Xbox One (with the PS4 received a boxed edition) from Rising Star Games and will head to the PC after that. Here’s hoping that it is indeed one damn good apocalypse.