Like a rude gesture to the remains of humanity, the massive tower designated “57” stands surrounded by the flattened planes of a radioactive wasteland. The last bastions of man inhabit a few towers such as this, battling over supplies and spite. Still, 57 is different. Something is going on there. Thus, it is up to a team of investigators to explore the edifice and solve its mystery. For fans of things that haven’t been reduced to rubble, there is a spot of bad news: this group’s idea of “investigation” is to blow up anything in their way.

This is the set up for Pixwerk’s upcoming co-op focused twin stick shooter Tower 57. While there could be some disappointment to learn that the game isn’t centered around climbing a building built from hardened bricks of Heinz brand ketchup, there is a certain joy to destroying damn near anything that gets in the way. The player starts off by picking one of many investigators, each with a different starting weapon, and proceeds to investigate the everloving hell out of anything that gets in the way. While it can bee played solo, it is definitely more fun in with a partner, with or without friendly fire turned on. 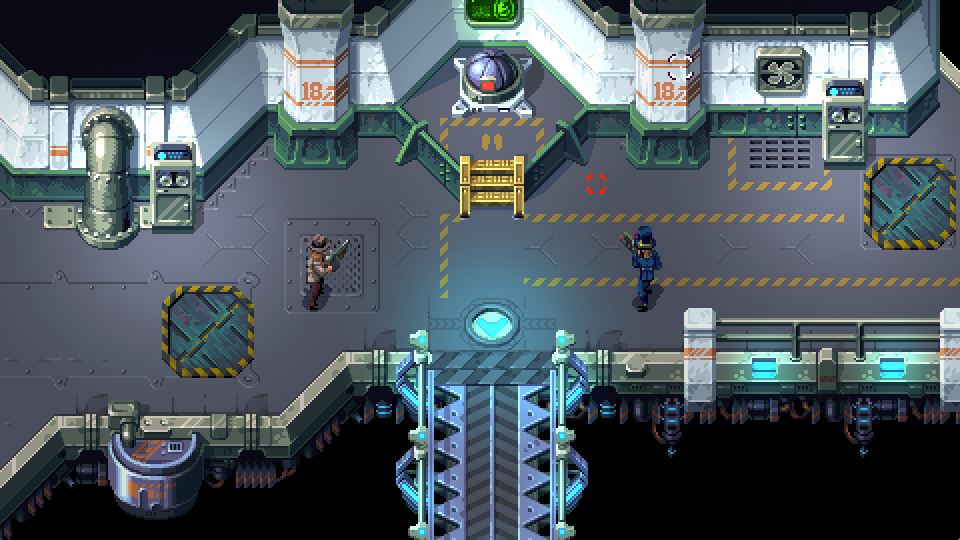 Destruction is absolutely vital to progressing in the game. During my first play through the demo, both the stranger I was paired with and I shot down our contact on the initial floor of the tower. So, instead of him just opening the required door to progress, we had to go through a conveyer belt maze to obtain a rocket launcher. Back tracking, we returned to the obstacle, where it was immediately discovered that blast damage from a rocket launcher can still harm a teammate, even if friendly fire is off. (Sorry.) Proceeding through, we mowed down hoards of defensive drones, eventually meeting the level boss. He didn’t last long. Afterwards, a tank was commandeered, and the rampage took a turn for the ultraviolent. In the second playthrough, the contact survived, and we walked right through the door.

This one point of a branching path shows the real potential for replayability that Tower 57 offers. One mistake tacked on a whole new side trip, but the fact that it was an option was a pretty cool touch. Should the game feature these types of branching paths throughout, and factoring in the different characters, the game will be good for hours of entertainment. By their own admission, Pixwerk has been laboring on this game longer than expected. The focus is on making sure that the title is up to the standards that they promised on their Kickstarter. The fact that the title is now being published by 11 bit Studios has granted the latitude needed to complete the project correctly. Time will tell if the entire game will live up to the demo, but there is reason to believe it will.