There is a countless amount of video games out there at the moment that all use exploration as a huge selling point. Heck, one of them has been the most talked-about game of the past month, for better and for worse. So to stand out among such a vast crowd, you really need a good angle at your side. And lucky for developers Arachnid Games, a steampunk submarine simulator with management and combat elements set in a world that’s been frozen over and turned into a watery Arctic tomb makes for a pretty damn good angle, and their upcoming game Diluvion delivered just that in an impressive demo.

To help set the mood, not only was the demo for Diluvion held in a darkened room to simulate the captain’s quarters in the depths of the ocean, but a steampunk keyboard and mouse were provided to help create an even bigger level of immersion. Mind you, this does slightly backfire when you’re struggling to try and locate the correct key for your sonar when all of them are written in an overly-elaborate font, but it was a nice touch nonetheless. We began in the middle of the ocean with our current ship, which controlled quite simply. Just use the mouse and point to where you want to go, use the throttle to control the speed, and use directional keys to control the rudders when needed. It took a moment to get into swing of things, but it became quite easy quickly. 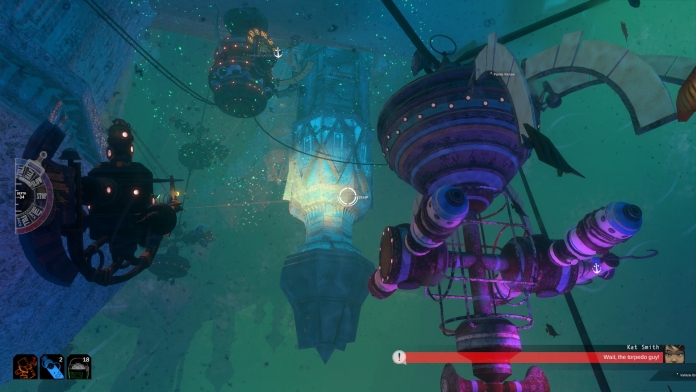 But while the murky, frozen, undersea world was a treat to explore, from its creepier bits to the moments where to first see the welcoming lights of underwater cities, exploring the 2D moments is where some of the highlights lie. At any time, you can shift to a hand-painted 2D view of your sub’s interior to check on the crew and talk to them, getting their opinions on various scenarios and other characters, along with being able to manage and make small modifications to the ship when needed. Salvaging for supplies is also fun as well, first requiring you to fire a harpoon and hook yourself to the vessel at the right moment, where you then rope yourself over in an exciting fashion, then comb over to the interior where you search for any chests containing potential supplies and crafting materials. The same goes for entering any towns or inhabited areas, where you can recruit new crew members, barter, and modify your ship to the point where it gains a completely different layout.

By the end, we were tasked with proving ourselves by retrieving a “passport” in an extremely deep, legendary section of the sea. Unfortunately, the enemy boat in the area proved to be a wee bit too powerful, so even with the newfound torpedoes picked up along the way, the ship went down quickly. Still, the general combat mechanics are also simple and show promise, and the product as a whole so far suggests a particularly deep experience, pun semi-intended. I haven’t been one for naval simulators of any kind before, but Diluvion just may be enough of a unique gem that I’ll have to give it a whirl when it comes out this Fall for the PC.