The backlog. We all have it. You have it, I have it, even major sites like ours have one. After all, with so many games out there constantly coming and going, attempting to cover every one and pick out the potential sleeper hits is a near-impossibility (I alone can think of several games this year that I regret not reviewing). It’s always the annoying enemy known as time that causes backlogs to build up, forcing you to ignore some games despite still having a lingering interest in them. Take Counterplay Games’ free-to-play collectible card game/turn-based strategy hybrid Duelyst, which after a successful Kickstarter campaign two years ago, was finally released earlier this year. Despite the initial excitement back then, it feels like there hasn’t been any notable press for the game since then, and despite being a free game, I haven’t had time for it myself.

Thankfully, the recent release of Duelyst on Steam as an additional platform has helped to revitalize interest in the game, quickly becoming one of the top trending titles on Valve’s service. And yes, I was finally able to play a round of the game against the computer, which I highly enjoyed. It’s the type of game that’s easy to learn yet tricky to master, and can quickly become addictive. The goal is to simply knock out your opponent’s general while keeping yours safe, casting cards each turn with the Cores given to you. You have your battle units and minions that you can place on the field which can move and perform one action each turn and can have different effects, spells that you can cast on specific areas or units, or artifacts you can have your general equip for stat boosts. Simple stuff, but highly effective. 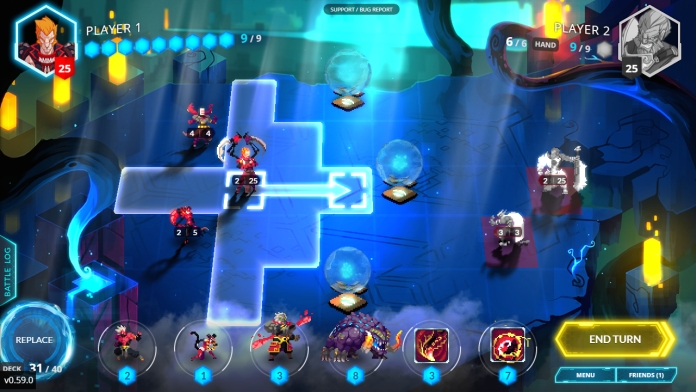 Duelyst really does indeed feel like a game such as Magic: The Gathering taken into a strategy-based arena, and it feels like natural evolution of the genre. Being able to see all of your units on the field in impressive 16-bit animated sprites over a lush and detailed backdrop is quite the visual treat indeed, matches are quick and just the right length, and the large amount of cards to collect and fill your deck with, along with the lore that goes with each one, all make for one highly enjoyable game. It’s easy to see why it began trending as soon as it hit Steam, providing quite the attractive package with a nice level of challenge.

While it wasn’t on display with the current demo I had, Counterplay Games CEO Keith Lee gave me a quick peek at what to expect with the game’s new expansion, Denizens of Shim’Zar, which was just recently released. The expansion includes an addition of one hundred new cards to add new play styles and archetypes, along with a new card type in the form of Battle Pets. Lee says that the goal is to release a new expansion every three to four months, along with monthly Season cards, and with Steam providing a new influx of players that Counterplay is grateful for, hopefully the regular updates will keep them around, because a tactics-based game as enjoyable as Duelyst easily deserves a big fanbase.