Having been introduced to the world of Dragon Quest when Nintendo Power included the NES copy of Dragon Warrior with a subscription, it should surprise no one that one of the upcoming games I am anticipating is Dragon Quest Builders.  Taking gameplay elements from Minecraft and mixing them with story driven adventure led to the creation of a unique experience within the world of Dragon Quest.  After spending some time playing the demo, I sat down with producer Noriyoshi Fujimoto to discuss the upcoming game.  In addition to learning about Dragon Quest Builders, I also learned that Mr. Fujimoto and I share a common love of inflicting unspeakable horrors unto The Sims.

[Hardcore Gamer] I’ll get the most obvious and probably most annoying question out of the way first.  What separates Dragon Quest Builders from simply being a Minecraft clone with Dragon Quest skin?

[N. Fujimoto] Dragon Quest Builders is an open world sandbox game where item and town construction is a major component so that similarity to Minecraft does exist.  Beyond that it is a story driven adventure game with many RPG elements, so even though there is some common ground, it is a very different game. 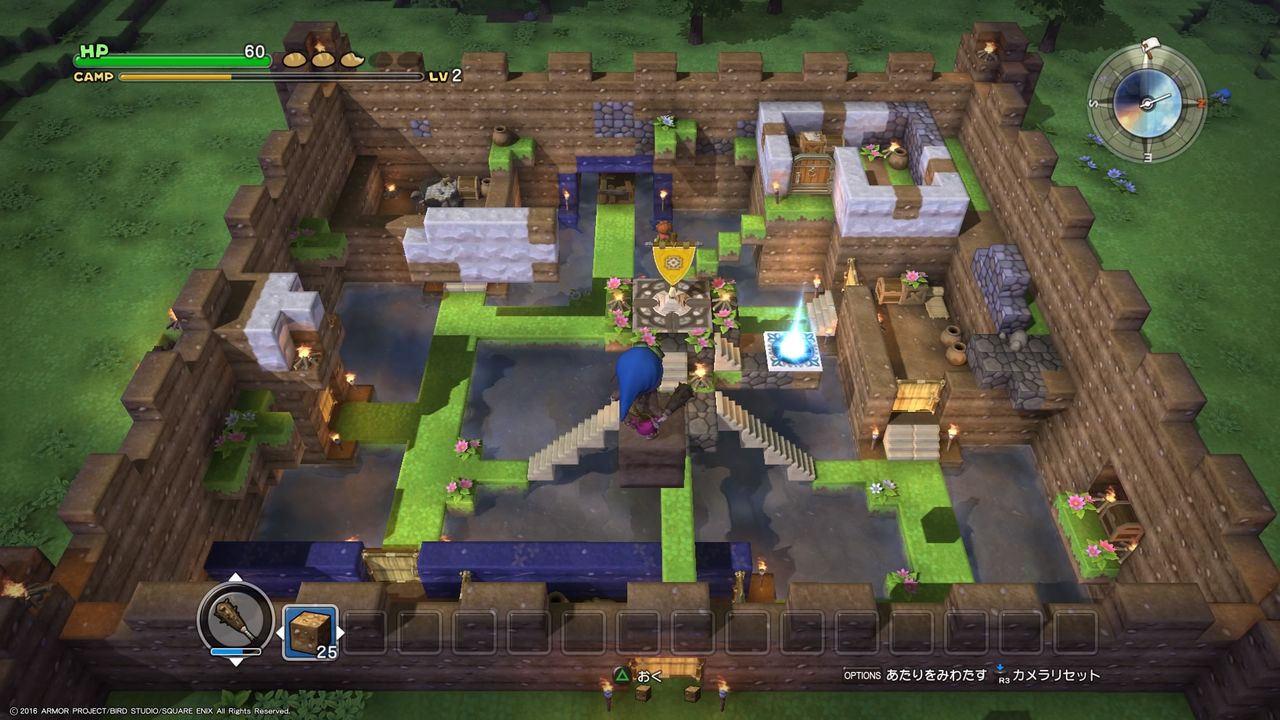 The introduction of the demo heavily references the first Dragon Quest, from the remixed Dragon Lord theme to the explanation that this takes place after Erdrick’s descendant chose the bad ending.  Will there be references to other games in the series or any specific characters making an appearance, such as Alena from IV or Yangus from VIII?

Would it be fair to say that is a new Dragon Quest game that chose to follow a new format compared to the traditional RPG style, similar to what Dragon Quest Heroes did?

Yes, you could say that.  This is a free building game but it is story driven, and what is built drives the progression of the story which we feel is one of the more interesting aspects of the game.  As you build up your town it attracts more NPCs, but it also attracts monsters that will come to attack your town and try to destroy it.  There is an ending to the story and there are major events at certain points in the story but these can be reached at any pace the player chooses.  The player can only focus on completing the story and rush through the game or they can complete the story at a leisurely pace and spent a lot of time building what they want to and exploring the world.  Dragon Quest Builders was designed to be played in whatever style someone chooses to.

Dragon Quest games traditionally have a lot of magic use.  Will the character in Dragon Quest Builders be able to cast spells?

Not in the traditional way.  The character’s special power is the ability to build and create.  Your character will be able to create items and equipment which in the game is like a magic power but there will be no spells like other Dragon Quest games.  Monsters on the other hand will have spells they can use against.

Boss battles have played a role in the Dragon Quest series.  Will they make an appearance in Dragon Quest Builders?

Yes there will be boss battles.  There are four different worlds in Dragon Quest Builders and each one will have a boss battle.  There will also be many sub quests and side quests that will also feature boss battles.  Each stage will have a strategy and that will play into the boss fight.  Going against a boss with brute force alone is not recommended, and building will play a role in success against a boss.  This may include building traps, or in the case of an aerial boss you will need to build a powerful bow to use against it. 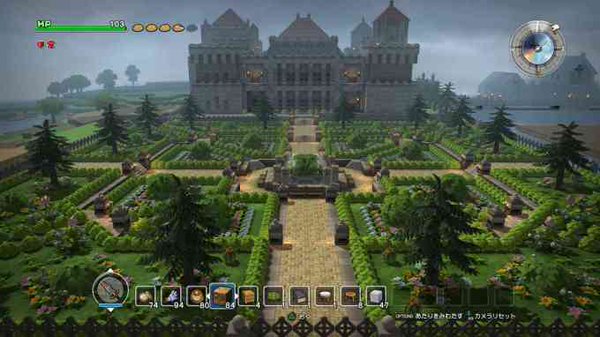 How long before the player encounters other survivors and what role do NPCs play in Dragon Quest Builders?

Once the player begins building up the town people arrive pretty quickly to populate the town.  The primary role of NPCs is to give you quests, so the more you build, the more NPCs arrive, and the more quests you have available.  Quests can cover a wide range of tasks, someone can simply request that you build them their room, while others may request you go see what is on top of a distant mountain or go kill a powerful enemy.  You can put a sign in front of a structure to limit who can occupy the space.  Or if there is an NPC you don’t like, you can build a poor shack.  You can also use this to force people to sleep next to each other.  There is a lot of freedom in this game to do whatever you want.

This is making me have flashbacks to The Sims where I did a variety of sadistic things to my poor Sim family.

(eyes widen and laughs)  I was a big fan of The Sims and also did terrible things to them.  (We go off on a tangent discussing the terrible atrocities we committed on our Sims, none of which is fit to print here)

So, on that note, can you kill the NPCs?

You can’t directly damage them with weapon attacks but you can use traps to get rid of somebody.  They don’t actually die, but if an NPC is reduced to zero hit points they fall unconscious.  They do gradually heal over time and eventually they will regain consciousness.  You can heal them to recover hit points more quickly, or you can take their unconscious body and drop them off in some far away desolate location.

I need to make a mental note to knock an NPC unconscious and imprison them by surrounding them with bonfires.

(boisterous laughter)  We haven’t tried this or see anyone do that but we want to know what happens when you try it.  This is a title that is designed to be family friendly but the freedom to play that way is definitely there.  There are many online videos posted in Japan of people playing in that style where they do bad things to the NPCs.  We have not seen any that do that specifically, but behaving in a sadistic way toward the NPCs is apparently very popular. 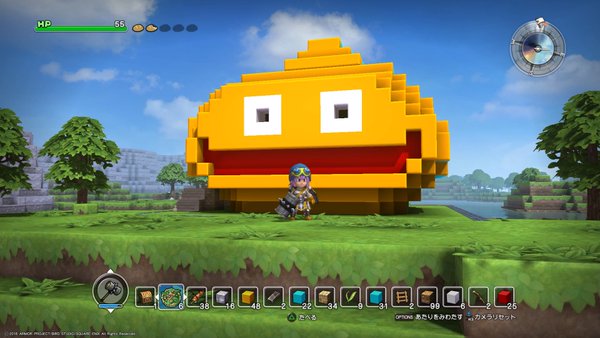 What are some features about Dragon Quest Builders you want people to know about that might not be obvious?

The pace of the game is dictated entirely by how the player wants to approach the game.  If someone only cares about completing the main story, it is possible to rush through the game and complete it in approximately ten hours, but because of the volume of optional quests and activities it can extend well beyond one hundred hours.  It is possible to build anywhere in the world, the player is not restricted to only having construction done in the base camp area.  This will not effect the camp growth or progress the story but should the player desire it is possible to cover every square inch of land with construction.  The scope of world is huge, and exploring to the end of it will give the player more things to build with nearly limitless potential.  There are four different stages, all are unique from each other with different challenges and unique things to do.

So these four different stages, are they physically connected to each other?

They are not physically connected to each other, but they are connected somehow.  (sly look on his face)  By playing the game the connection could be revealed…

After completing the story, is there a new game plus mode or other new features that get unlocked?

There is no new game plus but there is a separate free build mode.  Story progression unlocks items in free build mode, and free build mode allows the player to build without limits.  Things the player constructs in free build mode can be sent to other players.  Free build mode does online connectivity but it is single player only, aside from being able to share items and buildings.  It is possible to call for help from other players in this mode.  For example, someone was involved with a 24 hour stream and wanted to build an amusement park and requested help through the Dragon Quest Builders social networking channel to get help from other players.  Someone built a Ferris wheel, someone else built concessions, and the amusement park was able to get completed quickly since other people were contributing their creations.  (noticing the suite is getting packed up for the night and other media people are leaving) 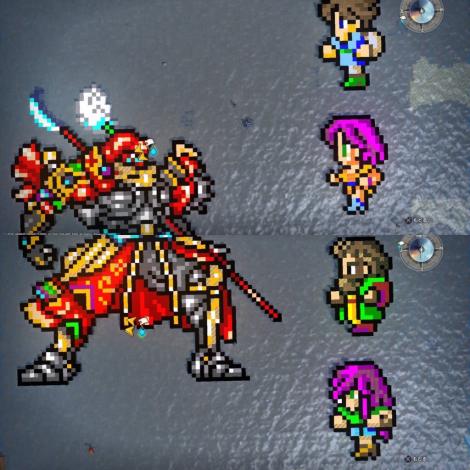 It seems that it is getting to be closing time so I should probably get out of here.  For my last question, since I got us off track talking about abusing The Sims, what is something you wish I asked you during that tangent and how would you answer it?

(thinks for a few seconds)  If I suck at sandbox and building games, would I still be able to play this?  Like traditional Dragon Quest games, anyone can pick up and play this.  Dragon Quest Builders includes blue prints that will instruct the player on how to build certain structures.  You are of course free to deviate from them as much as you want but for people who want to quickly build a structure we included them to facilitate faster gameplay and progress if someone wants to use them.  (Here I am shown some screenshots from a phone that include a ridiculously huge and impressive kingdom, the amusement park, a giant gold slime, and even a replica of a screen shot of the battle with Gilgamesh from Final Fantasy V)  All of these are screenshots from Dragon Quest builders.  If you can imagine it, you can build it.  There are some people in Japan who have spent excess of fifty days constructing magnificent kingdoms strictly from their own imagination.  Even people who are not fans of traditional Dragon Quest games can enjoy this so I hope a lot of people give it a shot when it comes out next month.

At this point I thank them for the interview and ask if they can send me some of the screenshots they showed me so I can put them in the write up which based on the above screenshot they obviously agreed to.  I have played Minecraft, and while I can appreciate what it does and see why it has the popularity it has, I was never able to get into it.  Dragon Quest Builders, on the other hand, was much more enjoyable, at least in my opinion.  Perhaps it is because I am a long time Dragon Quest fan and enjoy the story component but regardless of the reason I did enjoy the time I spent with the demo.  From the limited exposure I did get it seems like this really is an adventure/RPG that uses the building block mechanic and not a simple Minecraft clone dressed up like Dragon Quest.  As a result of my time playing the demo and this discussion, I am looking forward to getting my hands on the final version and testing out my bonfire prison idea.  Dragon Quest games have always had the same game designer, character designer, and composer, who are respectively Yuji Horii, Akira Toriyama, and Koichi Sugiyaman.  These three have worked on the franchise for its thirty year existence and are all on board with Dragon Quest Builders.