Local cooperative titles have become a rarer and rarer commodity these days. It seems like all the major publishers have decided that most folks prefer to do their gaming online. This seems an odd choice, as the proliferation of varieties and potency of body cleansing substances has made it so that being in close proximity with people is no longer as ghastly a proposition as it once was. Conventions are the obvious exception; this is where our nation’s research in olfactory warfare occurs (at the most recent PAX, I could have sworn that I heard Oppenheimer’s grandchild uttering “I have become stench, destroyer of deodorants.” ) React Games feel the same way (about the need for fun local co-op games. Not the “conventions smell bad” part. Well, they might agree with that too; I didn’t ask.). Their upcoming Super Dungeon Bros is a remarkably enticing action/RPG that looks to fill the couches.

As far as plot goes, there isn’t much of one. Four brothers are tasked with cleansing the land of Rockheim in search of loot, glory, or new and interesting ways to annoy others. While it can be played solo, with properly scaling difficulty, this really is a game to play with one or more friends. Groups can explore randomly generated dungeons, hacking, slashing, or crossbow…ing hordes of skeletal enemies to gather coins for upgrades between levels or much needed power ups at mid level shops. 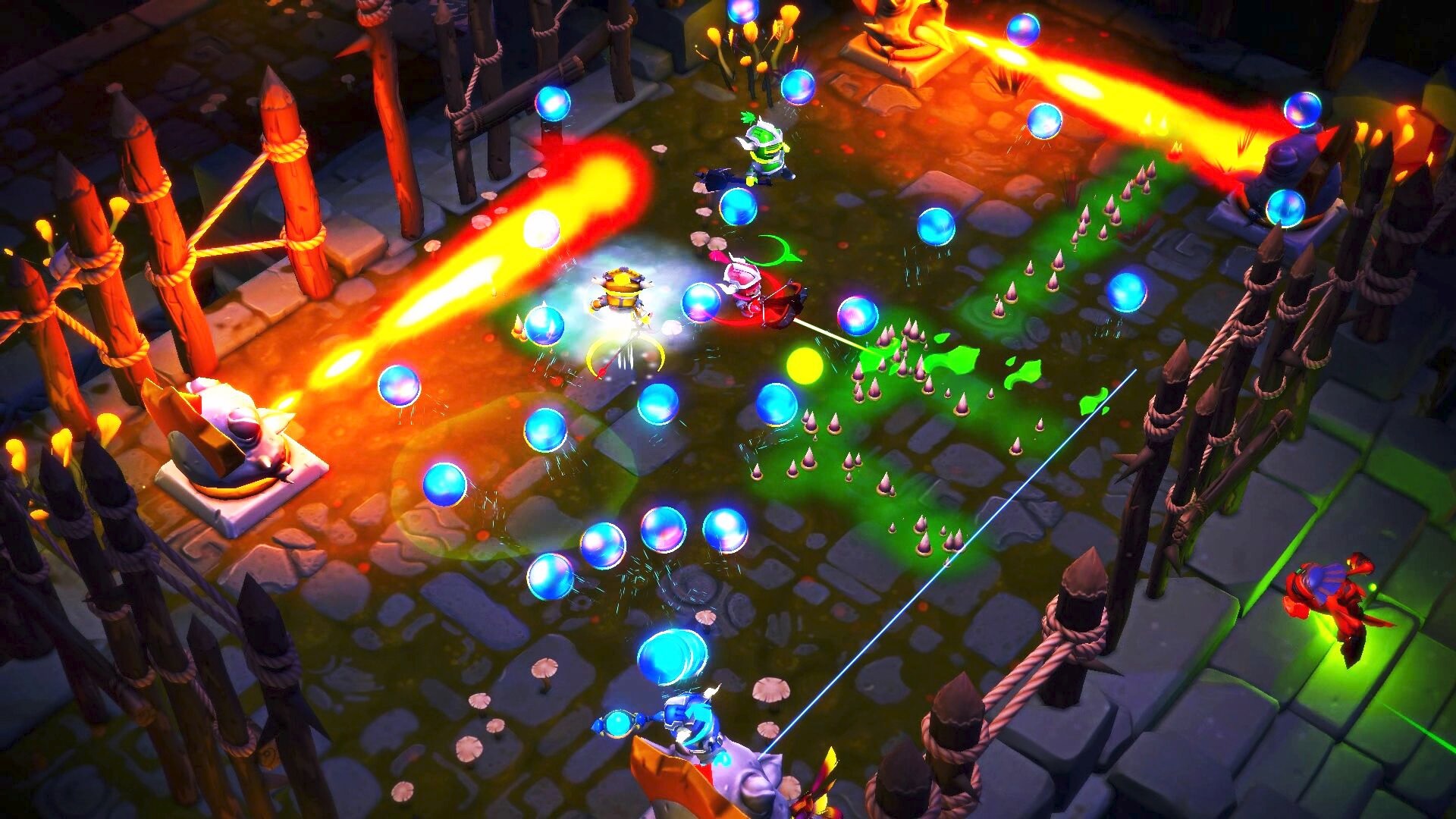 The game is intended to be endlessly replayable, with up to 32,000,000 possible maps to explore. These seem to be built with specific premade blocks in mind, as there are numerous occasions witnessed where simple puzzles occurred. One common one was the need to throw each other across chasms to raise bridges and allow everyone through. There are also precarious narrow spaces, and traps to avoid.

These descriptors might seem trite and possibly overdone in other titles. Through hands on time, it can be reported that this isn’t the case in play. Especially with others, Super Dungeon Bros is a frantic and challenging time. The early levels serve as a warm up, but it quickly becomes challenging. It wasn’t long before my cohort and I found ourselves utilizing every special attack against the heavy stream of foes. Once things got too bad, he jumped on a spinning blade trap and managed to lure some enemies in to thin their ranks a tad. It was later learned that the game is filled with myriad dirty tricks like this to exploit. As playtime grew longer, I found myself becoming more and more enamored with the heavy metal influenced title, and its bright, colorful graphics. 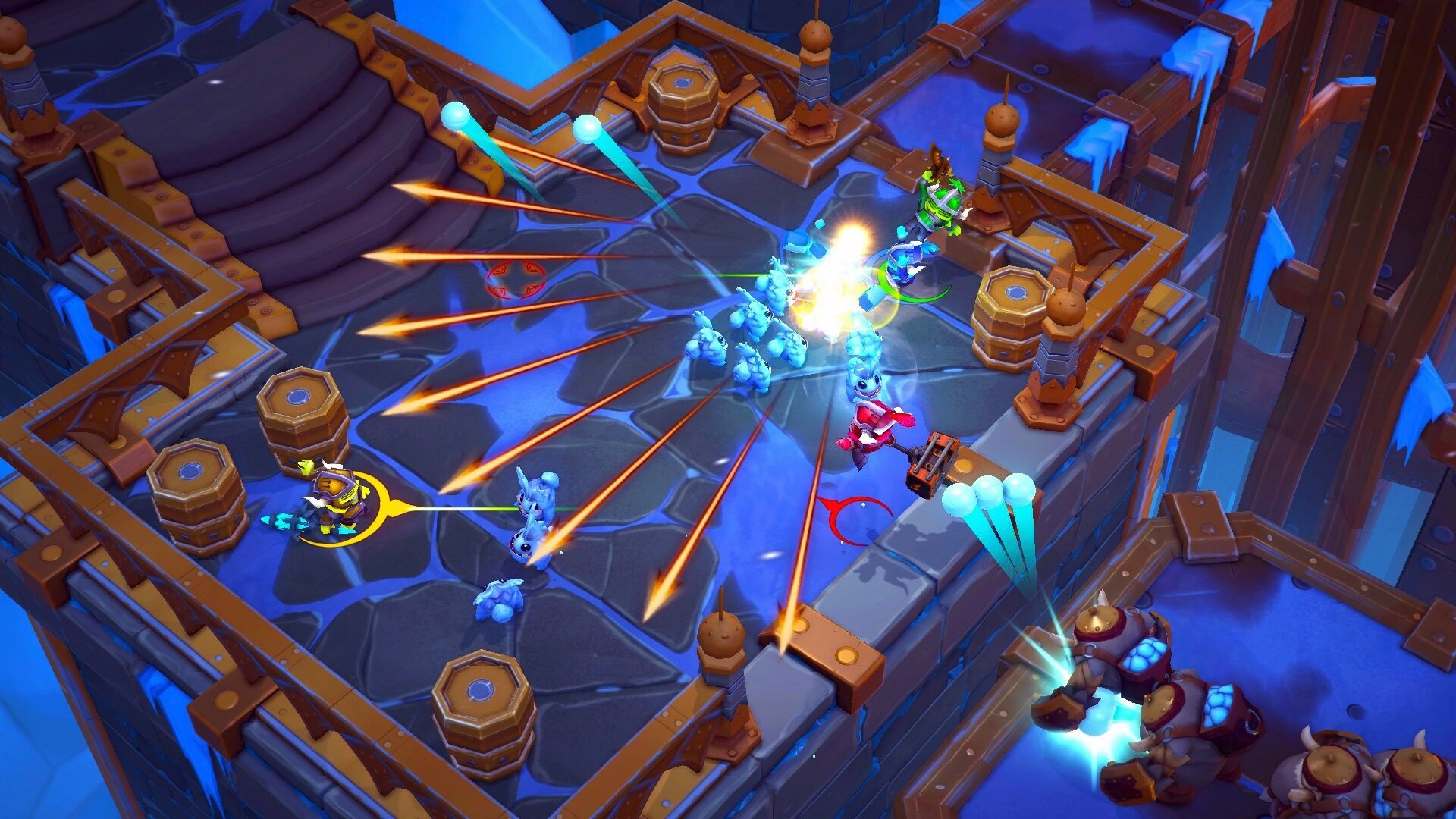 Based on the experience present in the demo, no one can argue that React Games made a deeply original game with Super Dungeon Bros. What they did, instead, was make a fantastic one. Take Castle Crashers, make it isometric, add in randomly generated levels that make sense, some tough bosses and a loot system that adds a level of stress when deciding to save money or blow it on a health refill and the formula for Super Dungeon Bros comes forward. It sets out to be fun time with friends. Since these same friends can throw each other into pits during play, it also sets out to be a good test of camaraderie. It looks like it will succeed on all fronts.