The Boston Festival of Indie Games was on Saturday, September 10 and there was a lot to unpack after trying to play as much as possible from the show floor.  While I couldn’t play everything, by any stretch of the imagination, I did play a lot, and this is part two of a three part series giving a brief rundown on everything I got my hands on.  The Festival is technically a Boston show, what with it stating the city name right in its title, but the area of effect is more like New England and surrounding environments.  That creates a lot of room for talent, especially in a world where the tools to create a game now involve a computer and nothing else other than endless hours of sweating blood trying to wrangle a dream into playable shape.  There were games ranging from near-AAA to school projects and personal statements all side-by-side, and the important thing was that people created them and showed off what they’d done.  I wish I’d had time to check out more.

In no particular order other than the game I cast my ballot for Favorite of Show getting the final spot of the three-day showcase, here’s the second installment.

Swing Star VR- This one is actually out on both Gear VR and the Oculus store, but the big version being demo-ed was for the Vive. Swing Star features a kid in a batting helmet with a glove that shoots out to grab onto the scenery, and he needs to swing to the bell at level’s end. Boxes hover in the air, ready to be be swung from while yodeling out your best Tarzan impression, but other mid-air objects are available as well. Jellies provide a brief break as the kid is trapped within, cannons shoot him high into the air, and the developers mentioned that a yo-yo block spins him around farther into the game than was practical to demo. On the Gear VR version you used line-of-sight and touched the button on the side of the headset to latch on to a block, while the non-demoed Rift version uses a controller button, both of which lead to a lot of head movement. The Vive, on the other hand, was a complete blast with the hand controllers, letting me do my best Spider-Man impression as each sent out a laser target to let you manually point at blocks. The helmet has only the one spring-glove, so you have to let go of one block before grabbing on to the next, but it doesn’t take long to get used to the rhythm of swing-release-airtime-swing again. While it would seem a prime candidate for air sickness the third-person perspective made Swing Star work, possibly helped by standing up to play the demo.

Bryte- Dungeon-exploration puzzle game with more than a passing resemblance to classic Zelda, except far more focused on tricky rooms than any level of combat. Sure, there’s a bow, but that’s to hit far-off switches or shoot through fire to light a torch, rather than used to turn enemies into pincushions.  The game starts with a young girl left blindfolded in a temple, and while that quickly comes off once the trials begin she’s got to work out how to get through with nothing more than the overhead view of the player to help solve each room.  Simple block-pushing puzzles quickly give way to carefully positioning torch-blocks to either cast or avoid casting light on different tiles, depending on the need to keep a block raised or not, and solving one set of rooms leads to a switch used to access the next area.  Switches and pressure plates are connected to doors or rising blocks by wires, lighting up when active and sometimes running across several screens for the bigger puzzles.  There’s an older demo of this available at IndieDB that’s well worth checking out.

Desolus- I’ve featured this one on the Screenshot Saturday series because it makes very pretty pictures but Desolus looks even better in motion. The Boston FIG demo has been completely overhauled since its PAX East showing back in April, and now has travel between alternating light and dark dimensions to supplement the exploration. You play from the first person view and wield the power of a mini black hole, pulling in and shooting out energy from the pulsing stars found across the landscape. An active star powers a dimensional gateway, which will either take you to the dark or light version of the world you’re in or transport you to the next area depending on type. After a bit of wandering about a secondary mechanic kicks in where you can play with the energy beams connecting stars and doors, removing it from an active door and tethering it to another. Desolus is in very early development, still coming into its gameplay identity, but the art has remained beautiful throughout. Swirling energy, trees both leafy and leafless, sunsets and auroras, and triangular portals leading seamlessly into alternate dimensions add an alien/mystical atmosphere to the different worlds. The dark and light dimensions shouldn’t be mistaken for “good” or “bad” but rather alternate takes on the same idea, differing in tone but linked and nearly identical in content. It’s the differences that make walking back and forth between the worlds necessary, as the ghost of a star or portal in one requires activating it in the other, and keeping track of what’s happening in both dimensions is a major part of the puzzle solving. 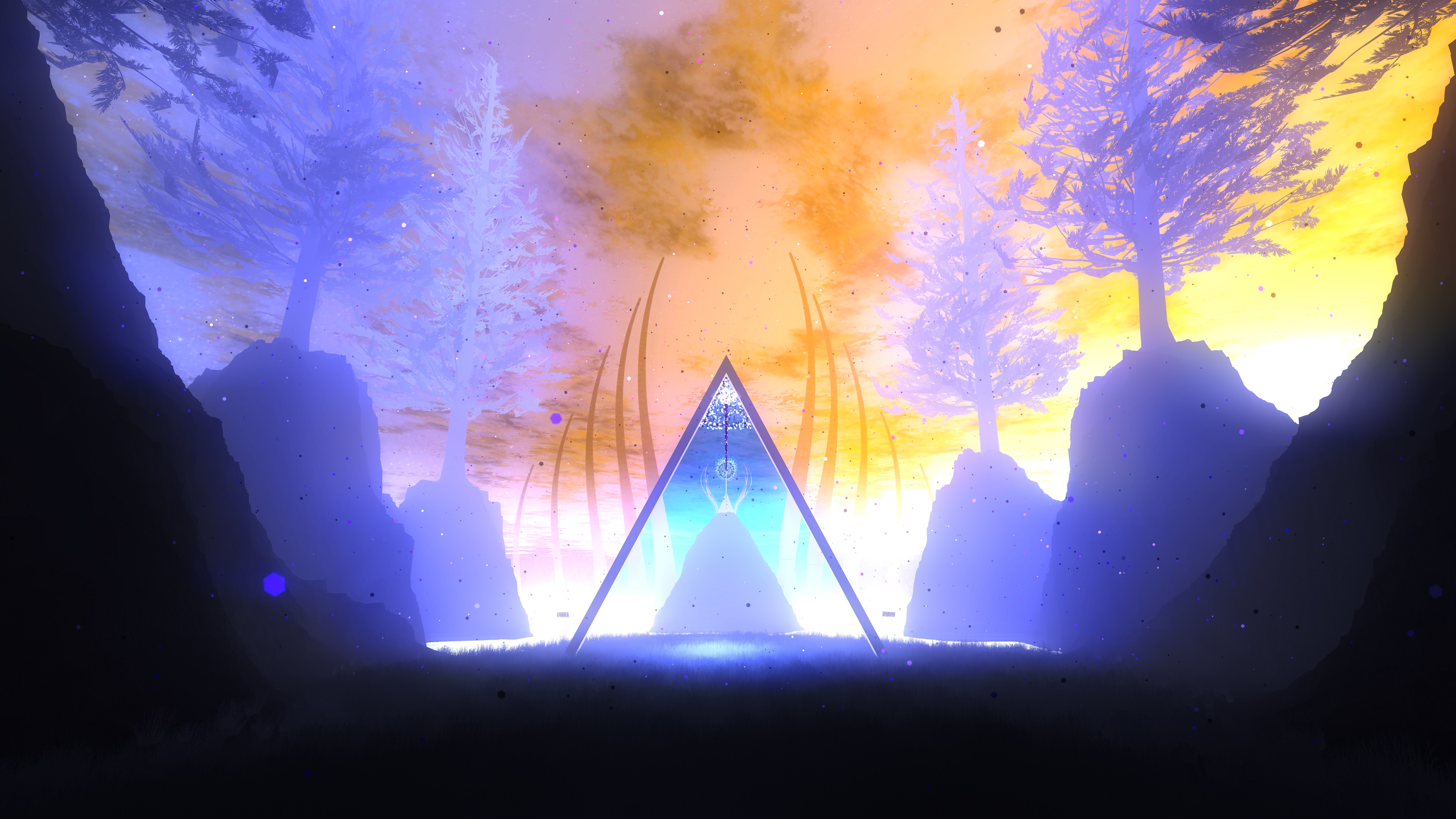 Geiger- I have to admit I’ve got nothing beyond a description for this one.  No press materials, no web page, no Greenlight, nothing.  It was part of the New England Institue of Technology display and that’s where the trail runs cold.  Geiger is a first-person exploration game where you’ve got a flashlight with dying batteries and a constantly ticking geiger counter to let you know just how irradiated you’re getting as you explore an abandoned underground bunker.  At first it looks like yet another “explore dark hallways” type of game, one more retread of the Silent Hill formula except without any fever-dream monsters to jump out and go Boo!, but it becomes obvious fairly soon that this isn’t what Geiger is about.  The voice of the player is far too upbeat, for one, and while the noise of the convention hall made it hard to hear exactly what he was saying his tone was that of a person having a good time exploring somewhere he knows he’s not supposed to be.  Something bad happened in the bunker, as evidenced by the radiation and occasional skeleton, but once you’ve found some batteries the flashlight becomes much more reliable, and a little exploring turns the hallways from foreboding to familiar.  The gameplay was a bit simplistic, in that all you do is explore, find keys, and open doors, but eventually one of the last rooms is for the generator and all of a sudden the lights are back on.  There’s still the feeling of an abandoned place where people died, but the farther in you go the less creepy it gets, which threw me off a bit because it’s the opposite of what I was expecting.  Whether Geiger ever turns into a full game or if it’s just a student project demo, I’m glad I took the time to play it because it’s always nice to have one’s expectations pleasantly subverted.

Super Rock Blasters-  A combination of Space War without the black hole and Asteroids, except you can bounce off the asteroids.  Two to four players go head-to-head in an asteroid-crowded field shooting neon vector-art laser death at each other and the winner is first to a pre-set number of kills.  On the one hand it’s a super-simple setup, and on the other it was great fun to zip around the arena trying to line up a good shot while dodging firepower from multiple directions as asteroids pulled double-duty being both a helpful shield and inconvenient obstacle to attack.  The Boston FIG demo was set to an open arena crammed full of rocks but, as the trailer below shows, there are other places to fight that add their own wrinkles to the combat.  It’s pure party-game blasting action, deep as a bottle cap but about a million times more fun.

Gravity Farms- Two-player iOS game that’s probably best played on an iPad, just like it was demo-ed at the booth.  Each player has a single button that controls their character, and the gaming area is a series of small planets on the single-screen playfield.  The space farmer runs around the planet, dropping seeds as it runs, and hitting the button launches your astronaut into space.  Hitting the button again sends out a tether to the nearest planet, and you continue the job of planting when you land.  Plants quickly rise from sprouts to fully mature space-veggies ready for harvest, so you’ll need to head back to the first planet to gather up everything you can.  When you run over your mature plants they’re instantly harvested, but if your opponent runs over your crops they’re torn from the earth and wasted.  There’s also a space-goat wandering the planets eating anything it can find, so you’ll need to divide your time between planting, harvesting, destroying your opponent’s crops, and chasing the goat away from your harvest.  The winner is the one who fills up their progress bar first, and when two people who know what they’re doing go head-to-head the matches can get very close as each person plants and sabotages in a space-duel to farming victory.  Like Geiger above there’s not a screenshot or video to be had for this game, but hit up the developer’s Facebook page if you want to see more.

And that’s the second part of the trilogy.  Stay tuned for Part 3, where you probably won’t hear Padme Amidala say “Anakin, you’re breaking my heart!”  No promises, though.