Occasionally, a game comes along that seems like a revelation. A title brimming with intriguing elements that manages to scratch an itch that went previously unnoticed. Even so, when attempting to describe it to others, the description feels reductive compared to the actual experience. This phenomenon applies to Nine Dots Studio’s Outward. When backed into a corner with a deadline cocked and aimed squarely at the head, one would be forced to describe Outward as Dark Souls on an Elder Scrolls like map, with some survival elements mixed in.

This description feels overly reductive but applicable to the actual tone of the title. The demo I experienced showed off these elements quite well. The vast majority of it was spent exploring a cave system. The walls glistened with a viscous substance and the inhabitants seemed to decide that our current status of “alive” was an affront to all that is good and righteous in the world. Though I was new to exploring this world, the game does feature split screen co-op. This proved a blessing as the developer was able to take me through, step by step, to find the best equipment for my play style. In Dark Souls, I play like a coward. Shield raised, shrieking “don’t hit me”; it’s a ludicrous display. This is also how I started off here, along with picking up and hording every piece of equipment. 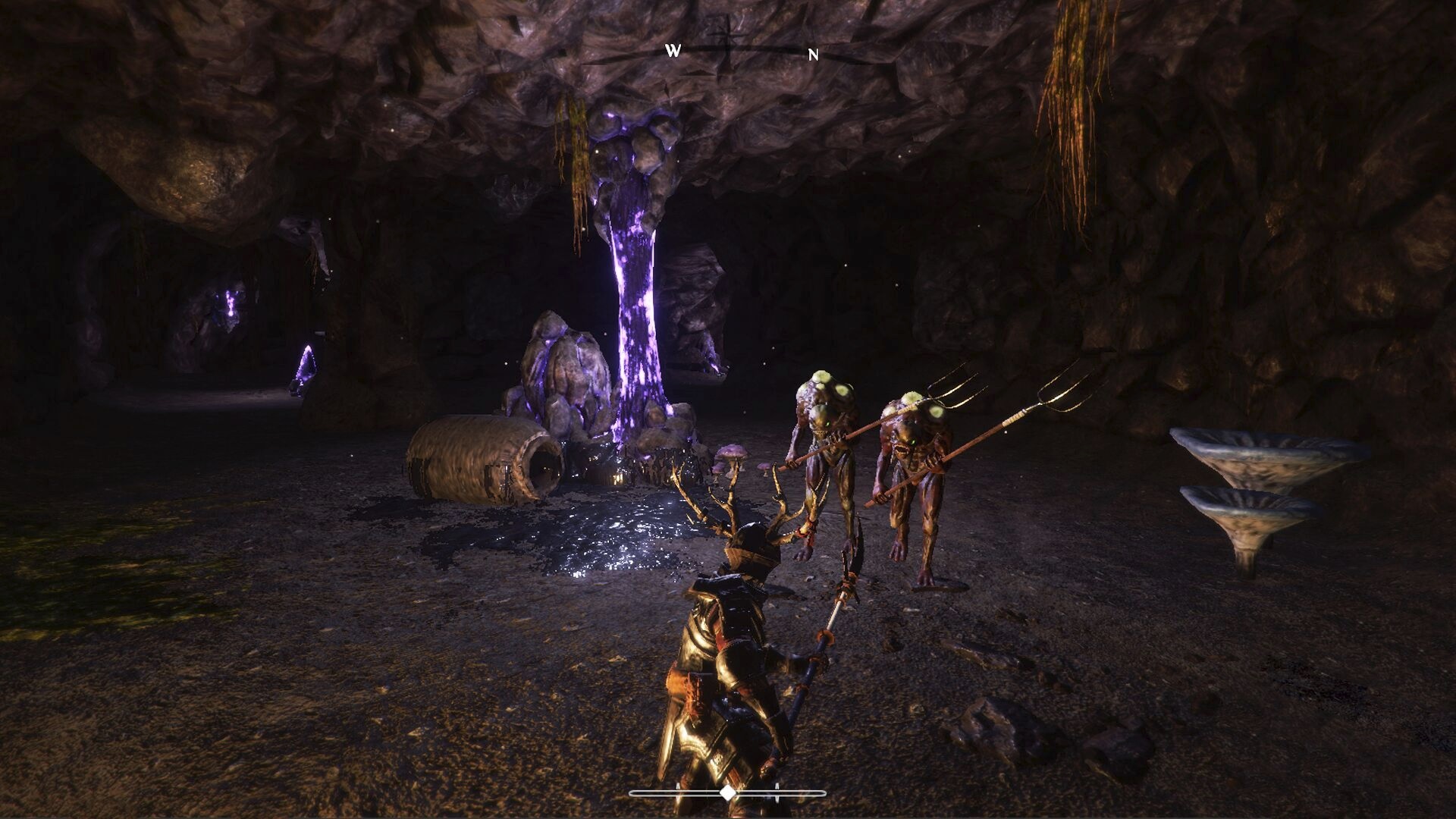 Eventually, mostly because of my experienced companion, I swapped these items for a wicked looked spiked two handed club. After exploring this environment for a while, my companion decided that I was ready to take on a boss. An ethereal foe, flitting about the room on unseen appendages, my partner kept its attention through the use of fire spells. These spells take on a more realistic slant, with his character holding an oil lamp in front of him and spitting flammable fluid through it to create a fireball. Hacking away from behind, the creature’s attention turned back to me. This is where it was quickly learned that the weight of all of the loot I hoarded was having an affect on mobility and stamina regeneration. This was my fault, as I had enough understanding of the mechanics before hand to know that I should have dropped my backpack before battle. It have been left on the ground, safe, while business was handled. Fortunately, my cohort got his attention again and we finished the job.

After copious use of bandages, we collected out goods and returned to the surface. Here, a wide open field, with crags and hills strewn about like punctuation to the paragraph laid out in the open world greeted us. The demo was coming to an end, but we needed to ensure that the heroes would be fed and rested in the morning. After a brief period of time, we found tracks for some tasty game. A bit more searching revealed the prey, which was quickly taken down and stripped for its meat. A second hog met the same fate. 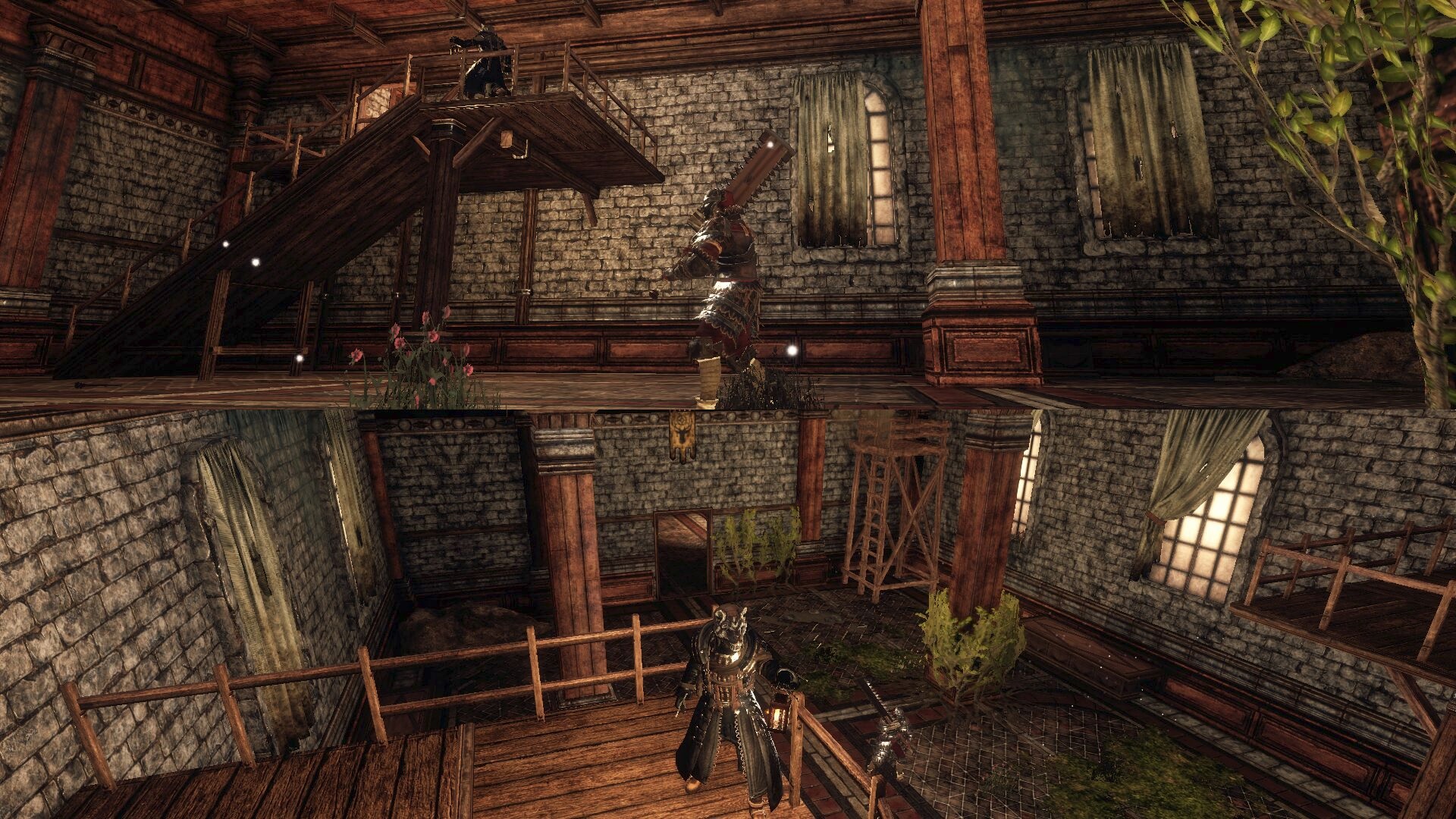 As my partner knew the location of a bandit camp, we made time to a place that would be suitable for rest. That is, if it weren’t for all these stupid rogues hanging about. After shedding my pack, we quickly went to work clearing the place. Out of tents they came, only to fall topped an oil lantern sunburn topped with a club to the noggin. Soon, the grounds were clear. We gathered some wood, cooked up chow, and hit the sack. A good days work was done.

This demo truly revealed the ambitions of the unknown studio. Nine Dots bit off quite a bit when they declared that their RPG would be open and based on some semblance of realism. Wearing plate armor in the desert is a foolish idea in reality and it would be detrimental here. It’s one thing to try to tackle this, it’s another to make it something people want to play. That is what this demo succeeded in showing. The combat was meaty and satisfying. The hunger and thirst elements are present but not oppressive, leaving it an engaging feature, not an annoyance. Really though, based on the demo, this upcoming multi-platform title is one that earns further inspection and excitement. I, for one, can’t wait to look Outward.