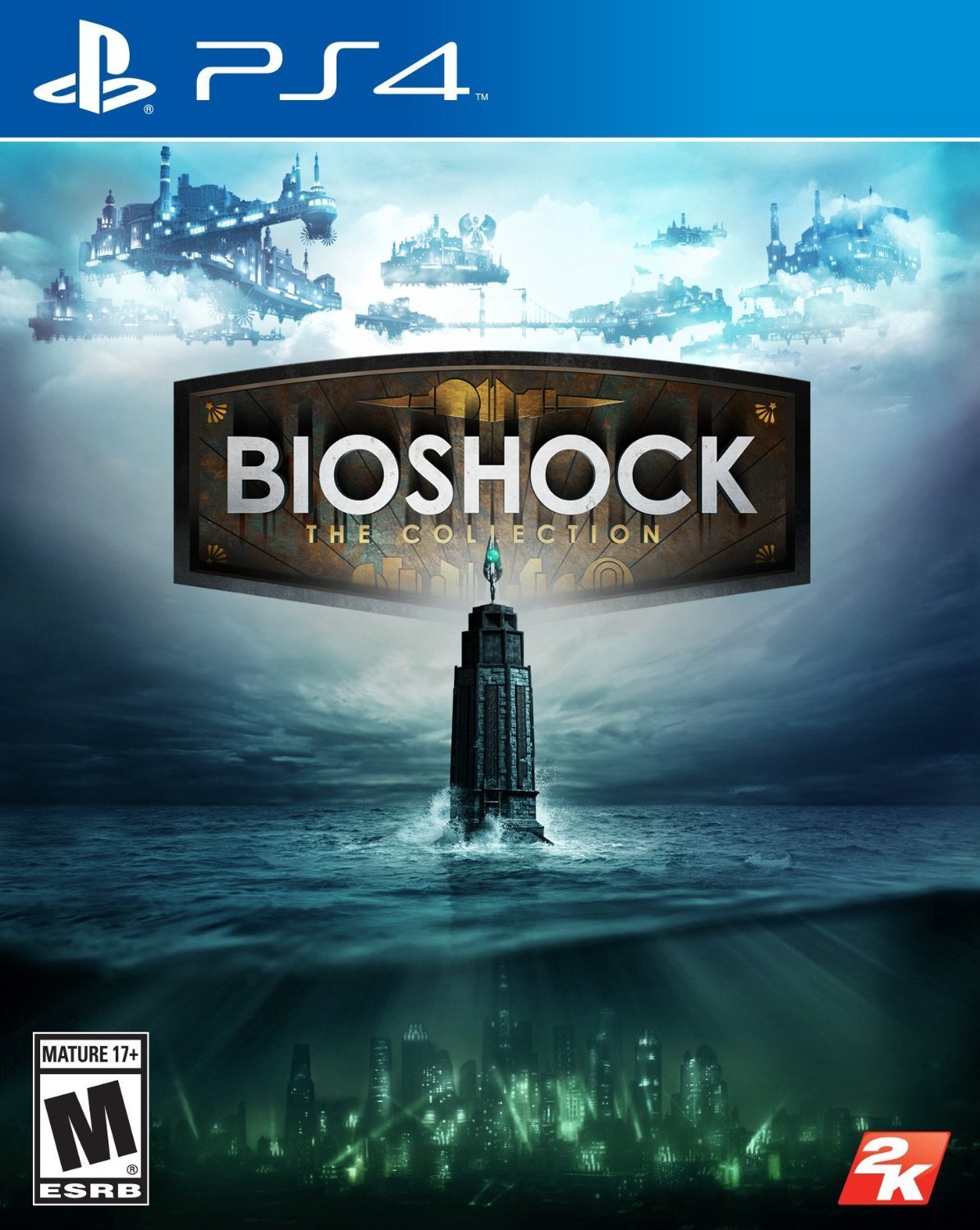 It’s hard to find a more revered set of games from the last-generation of consoles than the BioShock series. Irrational Games, 2K Marin and 2K Games’ baby spawned three games across the nearly decade-long generation, each launching to critical acclaim. BioShock started it all in 2007 on Xbox 360 and PC (2008 on PS3) by taking players to the underwater utopia of Rapture, BioShock 2 put us in the shoes of a Big Daddy in 2010 and BioShock Infinite wrapped up the story above the clouds in Colombia in 2013. It’s been a while since the world of BioShock has enamored us and 2K Games is ready to remind us with BioShock: The Collection. Is this the ultimate BioShock package or do these remasters belong at the bottom of the ocean?

BioShock: The Collection is a compilation of BioShock, BioShock 2 and BioShock Infinite. The excellent Minerva’s Den and Burial at Sea expansions are also included alongside all other single player DLC. Diving in, BioShock: The Collection looks like the perfect package. From that opening moment when you first see Rapture in the original BioShock, it’s easy to get caught up in the all the updated visuals. Taking a closer look, however, it becomes clear that not each Remaster was made equally.

It all begins with the original BioShock where the player takes control of Jack. After crash-landing in the middle of the Atlantic Ocean, Jack finds himself several fathoms beneath the waves in the city of Rapture. Hunted by Splicers, genetically-modified humans, and Raptures founder, Andrew Ryan, Jack must survive and uncover the secrets of the city. The story and characters are as compelling as they were back in 2007, and it’s easy to get swept back into the world even after multiple playthroughs. There’s just something special about Rapture that captures the imagination. 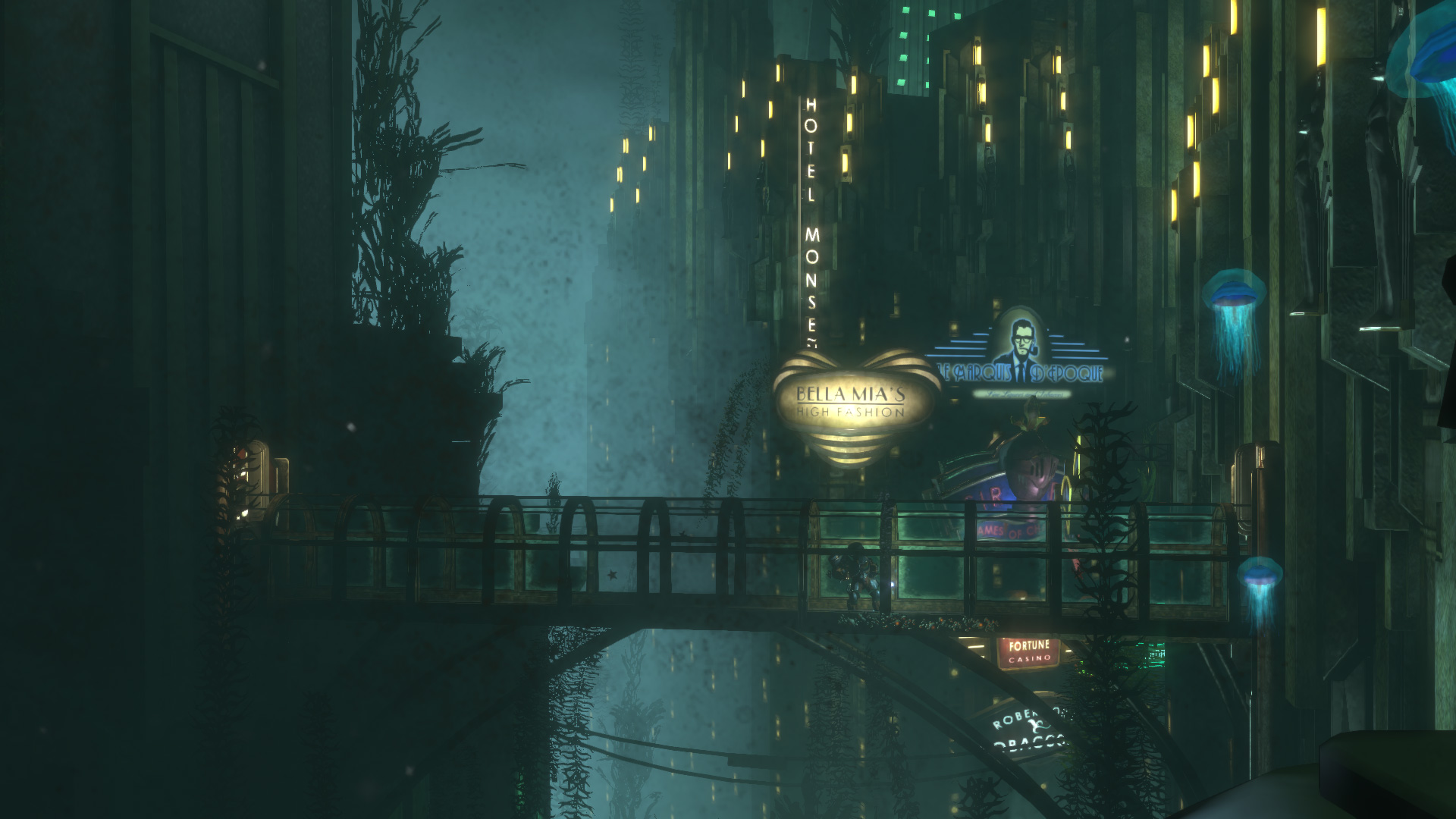 A lot of this is thanks the beautifully remastered graphics. Textures have been updated, models smoothed and additional details added to the environment. The framerate runs at a native 60fps and while there are a few drops here and there, maintains it well. Now, BioShock isn’t a remake, as such no amount of window dressing is going to hide that this is a last-gen game. NPC models still lack detail and can look a bit inhuman and it isn’t uncommon to find blurry textures. Still, this is an impressive job from Blind Squirrel Games.

While the visuals have improved, not much else has changed. Gameplay feels a bit tighter, but if you ever had a problem with BioShock’s shooting or hacking mechanics, then you won’t be happy. Nor is there any new content, though Xbox One and PC users finally get the previously PS3 exclusive challenge rooms. The only new addition is “Imagining BioShock,” a multi-part director’s commentary video series featuring Irrational Games’ Creative Director Ken Levine and Animation Director Shawn Robertson. It’s interesting to watch two of the creator’s breaking down the game, and it would have been nice to see something like this pop up in each game. Unfortunately, neither BioShock 2 nor BioShock Infinite were given the same treatment as BioShock. 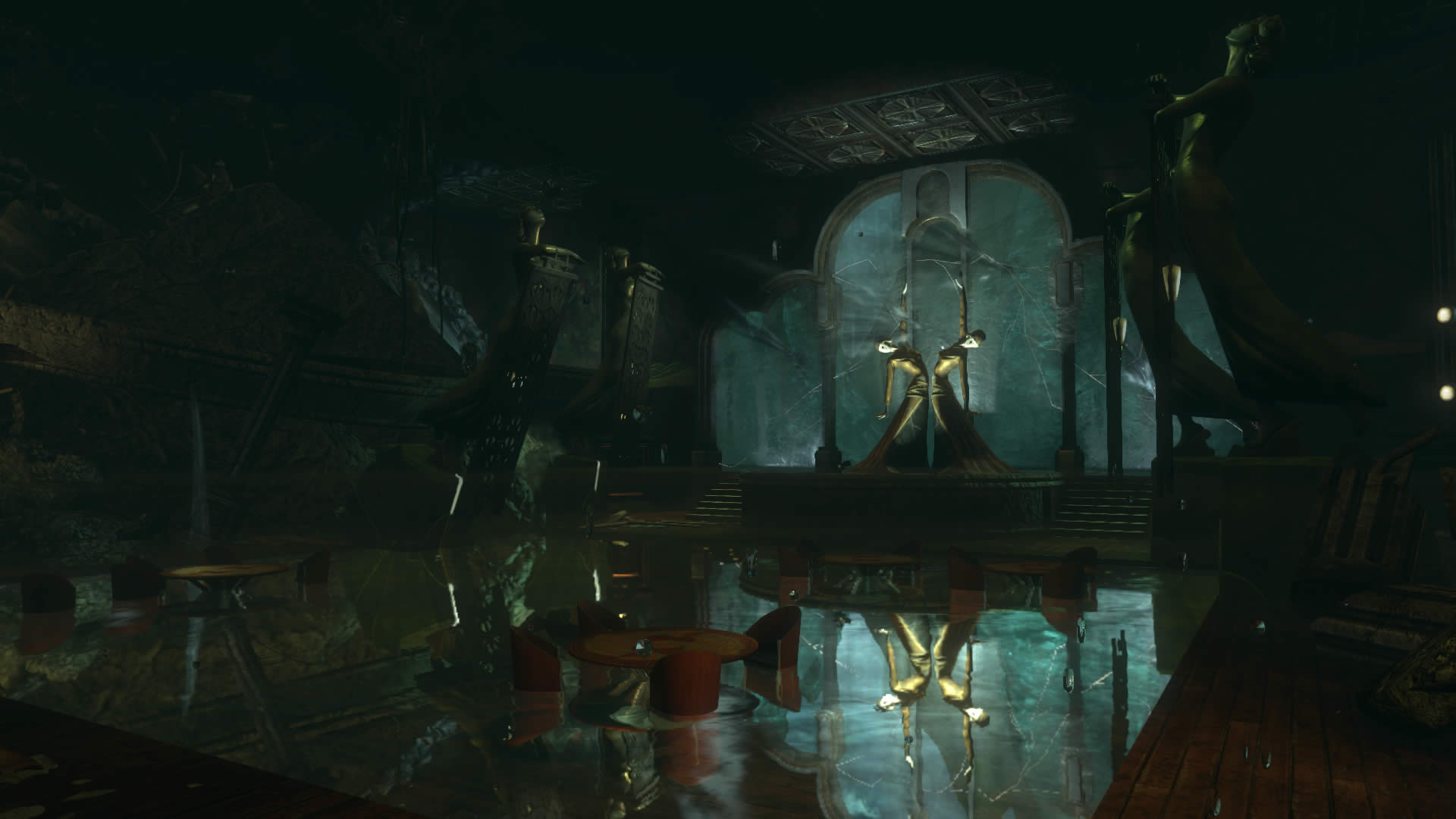 BioShock 2 was developed by 2K Marin with input from Irrational Games. Taking place ten years after the events of the original game, BioShock 2 puts players in the shoes of Subject Delta, a Big Daddy who has been presumed dead all this time. Awakened, Delta looks to reunite with his Little Sister, Eleanor and to seek revenge against Sofia Lamb who has become Rapture’s new leader in Ryan’s absence.

Often considered the black sheep of the BioShock games, BioShock 2 is quite excellent, delivering a profoundly personal story all while expanding on the themes of the BioShock universe. Unfortunately, while it does get some attention from Blind Squirrel Games, it doesn’t get as much as it should. The visual update is subtle, but it is there. BioShock 2’s art style is still fantastic and wandering the halls of a crumbling Rapture remains breathtaking, but it would have been nice to have seen more effort gone into the visuals. BioShock 2 also has a harder time maintaining 60fps than the other included games. The combat, which was a huge improvement over the original BioShock, remains intact and is arguably still the best gameplay in a BioShock game. 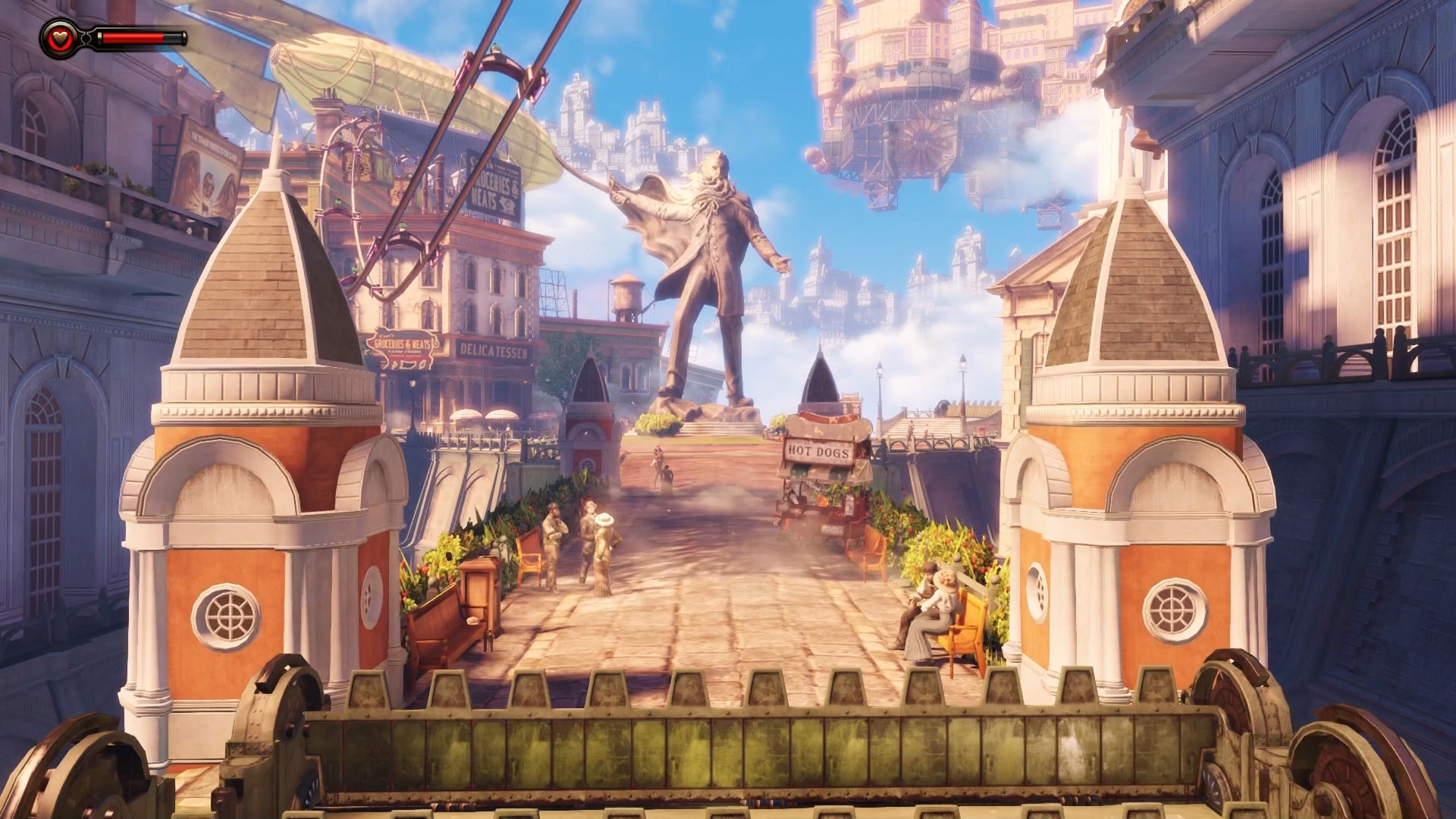 BioShock Infinite isn’t so much a remaster, but more of a port of the PC version (which is why it’s a free upgrade on PC). Taking place in 1912, you play as Booker DeWitt who is mysteriously contracted to find Elizabeth, a girl trapped in the floating city of Colombia. Situated high above the clouds, Colombia seems like the perfect place, but it hides plenty of dark secrets. Teaming up with Elizabeth, Booker must fight his way out to wipe away his debt.

Being a relatively recent game (released in 2013), BioShock Infinite certainly didn’t need as much retooling as the previous games. Infinite was already a good looking game on PC all those years ago, and this version looks leaps and bounds better than the PS3/Xbox 360 version. Colombia is still a beautiful city to behold, and seeing it for the first time invokes similar feelings to seeing Rapture for the first time. Unfortunately, this isn’t the first time, and there isn’t much here to rekindle that feeling many had back in 2013. The lack of any visual updates or new additions steals a bit of the charm of reentering Colombia again. While Rapture has been decked out with new visuals and effects in BioShock, Infinite is just a straight up port. That’s not say it’s a bad port. Experiencing the game running at a native 1080p and a smooth 60fps is remarkable for console players, but there’s nothing here to make returning player’s jaws drop like there is with BioShock.

Like with BioShock 2, BioShock Infinite does not come with a director’s commentary video series, which is a shame considering how much the game changed since it was announced. Getting some insight into the development process would have been neat. At least we get the complete Burial at Sea DLC, Infinite’s great story expansion. Finally it should be noted that anyone who owns the BioShock games on PC can upgrade to the remastered versions for free 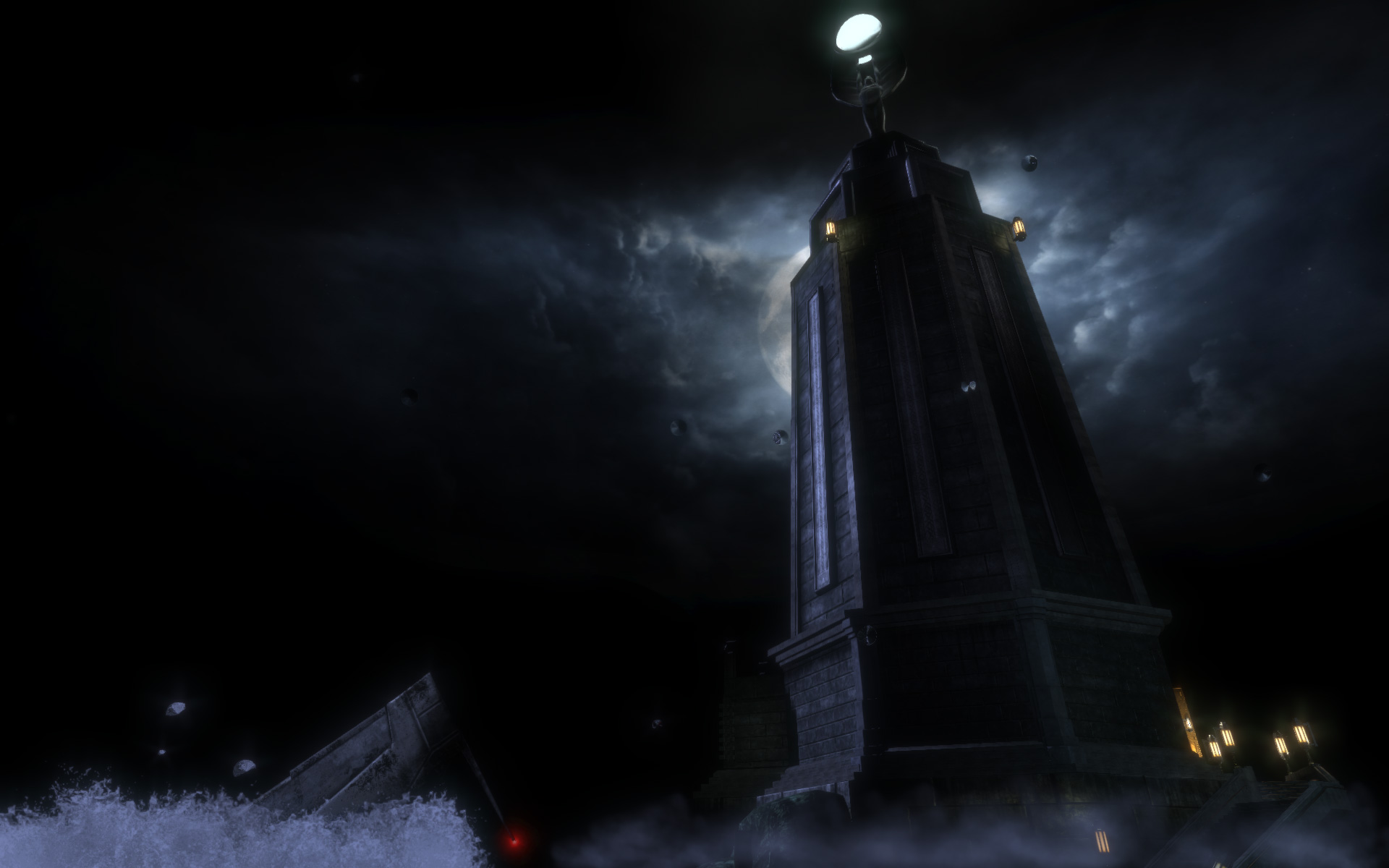 BioShock: The Collection successfully brings three of the best games from the last-generation to the current-generation, but not without a few hiccups. Everything you loved, or hated, about the originals is still intact. The gameplay, art style, engrossing plots and the wondrous cities continue to provide plenty of incentive to give back into the ocean or fly into the skies. While Blind Squirrel Games has done a good job remastering the original BioShock for a new generation, it is disappointing to see the effort put into each entry decline. With so much attention-to-detail put into BioShock, it’s a shame to see BioShock 2 and BioShock Infinite put on the back-burner. BioShock: The Collection is still the best way to play these classics and those who missed these games the first time are in for a real treat. Those who have played all three games will find the visit back to Rapture almost as endearing as the first time, just don’t expect that sense of endearment to carry over to BioShock 2 or BioShock Infinite.