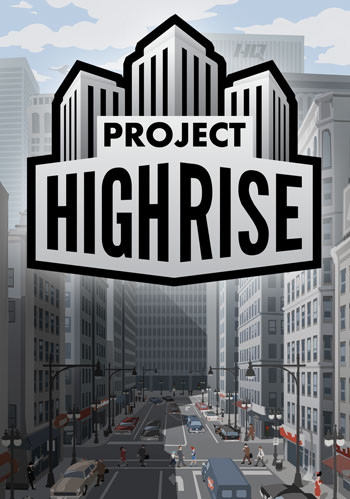 Every so often, a game comes along that utterly ensnares its audience. Many have fallen prey to the likes of Civilization V, American Truck Simulator and others with their incredibly simple, but amazingly entertaining, gameplay. A new title may have just entered the ranks of these games most likely to cause obsessive play sessions. Its name is Project Highrise. Although not as well known as this newest release, developer SomaSim created another management simulator 1849 two years ago. It provided players with the unique concept of managing their own California Gold Rush-era town. As fun as this was, it didn’t quite scratch that itch of the genre’s finest, such as SimCity or even Cities. Project Highrise proves the team have learned quite a bit over the past few years of development, though there’s still some more work to be done.

Project Highrise is a game which lives up to its name. In this 2D tower-building and management simulation, players are basically free to create whatever sort of skyscraper their heart desires. If they wish to build a fifty foot tall office complex, then that’s an option. Others may opt to focus on apartments for tenants, or even turn their complex into a micro city filled with restaurants and shopping centers. Heck, you can even go ahead and build multiple towers instead of one massive buildings, provided you’re playing on a map with enough room to house them all. Once it’s finally constructed, sitting back and watching the money roll in just feels great. It also increases the urge to tweak the tower’s power grid and layout, or even start over again. Having creative freedom to build your structure as desired is something that people have been wanting since the release of SimTower. In many ways, this is the modern SimTower which has been informed by video game concepts of today.

The most obvious of these modern flourishes is Steam Workshop support. Now it’s possible to look to other players for additional rooms or decorations. Don’t like the way that certain offices or restaurants appear, or simply want greater variety? Now it’s easy to quickly browse the store, grab a few new rooms, and add them right into your gameplay session. There’s also a handy tutorial available for anyone with the desire to create their own mods. Beyond this, there are also metagaming aspects which attempt to lead players down certain paths. One such element is that of the consultants. There are three types of consultants and each focuses on a different aspect of tower-building. The aesthetics consultant unlocks a variety of pretty things to add to your building. The politics track unlocks higher tower access, as well as increased zoning permissions. Anyone looking to build something massive absolutely needs to prioritize this consultant. Finally, there is the operations consultant which enhances speed/automation of background processes. 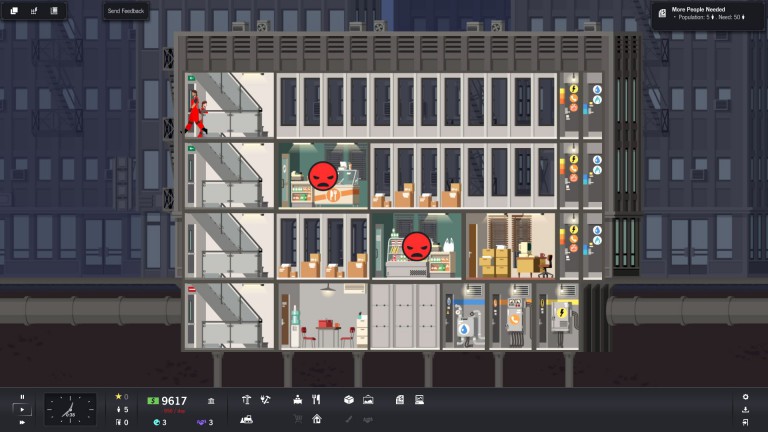 Savvy players are also able to use a perk system known as “media buzz.” Basically, after having happy folks within your building, they generate small amounts of buzz. After a while you accumulate enough to use it on a media campaign. Campaigns range from enticing more renters to decreasing construction costs. All campaigns last for 24 hours. Deciding when to run a campaign requires strategy and forethought, as the buzz price increases after each purchase. There’s also the matter of contracts. After selecting up to two at a time, these contracts offer goals for the player to work toward as they create their perfect skyscraper. Some contracts are easy to complete just by playing, such as crossing a certain revenue per day threshold. Others are more specific, such as a requirement for your tower to house 50 apartment residents. The only issue with this is it may lead to less than perfect building optimization by trying to satisfy all contracts.

When it comes to actually building up your tower from the start, Project Highrise begins at a slow pace. After all, you’ve barely got any money in the bank (and may even need to take out a loan). On the easiest difficulty, however, you’ll start turning a profit quite fast. Building is easy, but not perfect. The biggest challenge comes in the form of each tenant having their own likes and dislikes. As you might expect, most tenants dislike being inundated with noise or overwhelming smells. However, there’s no specific explanation for how far sounds or scents travel. The provided heat map of both elements provides only a guesstimate, at best. This leads to a lot of guessing initially to discover what layouts are safe versus which will annoy the heck out of tenants. Avoiding angry tenants is necessary as they’ll eventually move out in frustration! 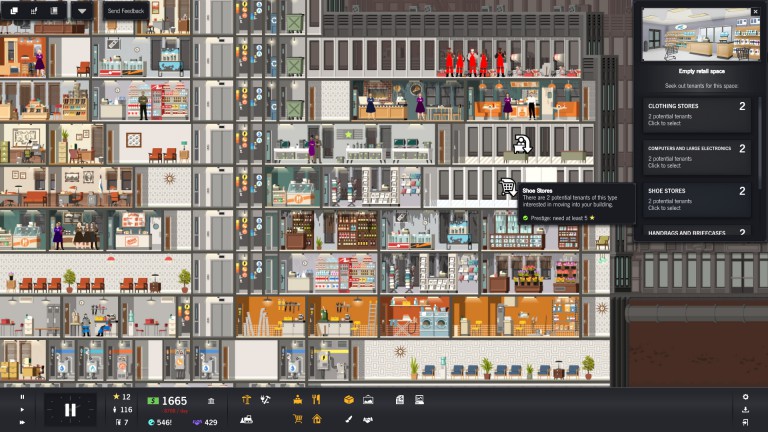 There are also a few problems which only crop up after getting past the early gameplay. You see, key rooms for any self-respecting tower are construction and maintenance offices. However, you can only have a limited amount of both these resources. This causes undue stress to tenants because it will take longer for repairs or new construction. Then there’s the simple matter of viewing your entire, beautiful tower. The maximum zoom out thus far is not particularly far away. It does keep the tower graphics “readable” enough, but the camera should be able to go even further back. As is, the camera restriction leads to players with the tallest towers needing to click and drag up and down the screen to keep an eye on everything. Without some sort of callout icon to bring attention to trouble brewing off screen, this constant scrolling the length of a large tower is required. Aspects like these are not game breaking bugs, but it shows there is still room for improvement.

Also included with Project Highrise’s popular sandbox mode are ten different scenarios. Each ranges in difficulty and provides creatively-challenged gamers with a predefined building immediately. Of course, each of these towers also starts off with some issues. Every scenario has three tasks to complete (though only one is needed to finish the stage). Beating the first scenario unlocks access to the next, and so on. Adding a bit more guidance to building might be helpful for some, but to others it’s a mode they’ll likely never even touch. After all, for many, the fun of building management simulators is to create something from scratch rather than have some pre-fab design laid out. 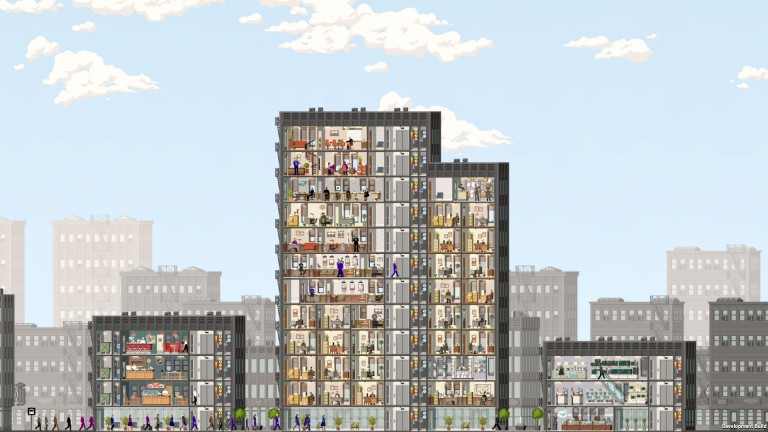 Project Highrise is the kind of game that grabs a hold of players and doesn’t let go. Only once you’re in deep with a massive building do you begin to notice the cracks. There are undoubtedly numerous improvements that should be made — and likely will be in the coming weeks via patches — but even with some niggling complaints, it’s still incredibly challenging to put the darn thing down. The satisfaction of making money hand over fist on your tower design leads to more construction, tweaking and further satisfaction. Watching people buzz about in droves to your amazing skyscraper is simply sublime. Anyone looking for a modern day SimTower should pick up Project Highrise. Just be warned that you’ll end up sinking dozens of hours into crafting a perfect tower.