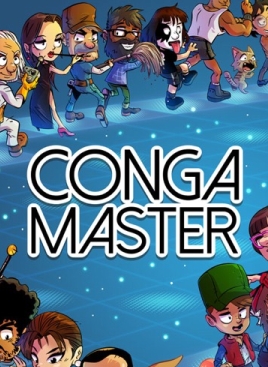 We’ve seen a few games based around controlling frenzied mobs come through here lately, but all of those were mobs of the violent sort. So is it possible to have any sort of successful mob game that’s a tad more peaceful, but just as joyously raucous? Well, that’s where the power of the conga comes in, being wielded by Rising Star Games and developers Undercoders in the form of Conga Master, where the goal is to build the longest and best conga line possible. And while it does end up stumbling a couple of times, this game is indeed one potentially addictive dance that may be worth checking out.

The plot is simply to head out on a journey to become the best conga master in the span ofa single night, traveling between several clubs and parties. Choosing from one of four initial characters, you bust open the doors to the joint, go “What could possibly go wrong?” (no, seriously, and every character says it in their own unique voice), and proceed to rock the crowd over with your epic dance skills. Oh, and there’s also that thing about the aliens spying on and trying to kidnap you and your posse, naturally. You unlock more characters as you play through the story mode, including expies of Mulder and Scully, Doc Brown, Elvis, Poison from Final Fight, and Bernard and Hoagie from Day of the Tentacle, among others. It’s definitely a cute and humorous touch, and adds a lot to the game’s charm.

Conga Master essentially plays like a top-down arcade game, and as such, has a simple yet perfect control scheme. You use the left key/trigger to turn your character left, and the right one to turn them right. A shocking concept, I know, but it works beautifully. The goal is to move your line as close to the club patrons as you can in order to catch their attention, then circle around them until they become fully captivated by your dance and join the line, with their attraction building as long as any part of the line is near them. Completing the level, however, requires filling your line with specific amounts of four different kinds of people: Cool kids, sexy people, nerds, and fashionistas, each defined by a symbol that appears when you get close. Then you head for the exit, outrun some aliens, spin a wheel for bonuses, and on to the next party. 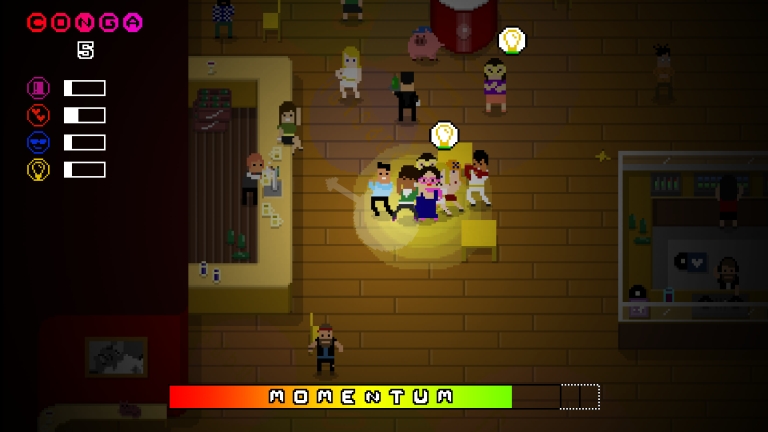 Naturally, it isn’t as easy as that. Banana peels can litter the floor and trip you up, waiters can get you drunk for a moment, jocks can bump you out of the way, or worse, into other guests, whose progress in attracting them to your line resets to zero when you collide with them. There’s also the matter that you have to keep the momentum going, showcased via a meter that slowly dies down, and when it hits zero, you lose. And the longer the line, the quicker it drains. You have to keep new conga-goers coming in and stringing together combos in order to last the night. So there’s a surprising amount of strategy in play, especially with each character having different stats in the areas of charisma, attraction radius, movement speed, and turning. It’s all quite addictive and fun indeed, especially with you build up an especially lengthy line that allows you to wrap around people to build a killer combo.

You also have power-ups throughout each level to temporarily boost those stats, but getting them is quite awkward. They’re perched up on the tops of various structures, and you have to knock them down by holding down both triggers to speed up and ram into them. The problem is that you get turned around after getting them down, disorienting you slightly and making it tricky to pick up your new power-ups ASAP. You can also earn power-ups to begin each stage with in between levels, courtesy of a wheel that you spin after earning tickets from a mini-game where you and your line outrun a UFO (which is how you also earn new characters). The problem is that at the start, even though you can bring in some additional partygoers from the previous level, the line will be too short and the power-ups lasting for too little to make any impact.

Aside from that, another flaw Conga Master has in its gameplay is that it can be reliant on chance at times, or at least feels like it. Sometimes your potential dancers are spread out too thin, and sometimes you might luck out and find five or so of them all grouped together. And while the various types of people who join you do have signature appearances as well, it can be tough to differentiate who belongs in what group until you get close to them, at least without more than a few plays. You also have one shot to beat the story mode, because if you quit at any time, you have to start over again. Thankfully, it only lasts about an hour or so at most, so it’s easy to work though. 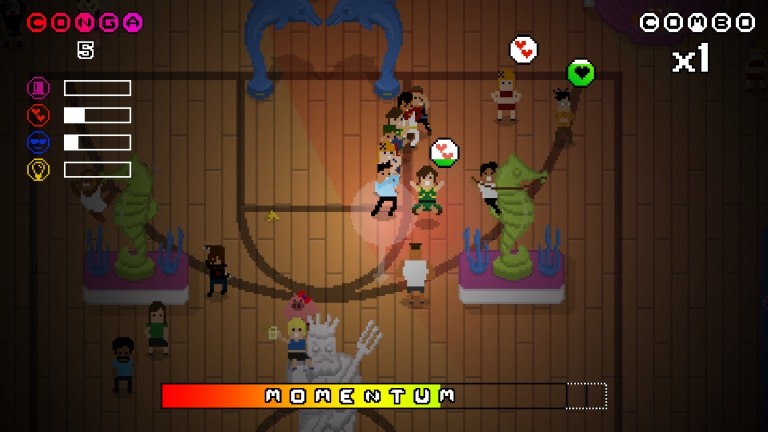 Luck aside, the level design in Conga Master is quite well-done as well (save for the occasion hazard hidden by scenery), with each layout having enough areas to explore, and VIP areas to unlock when you have enough people in your line. The visuals alone are enough to keep you exploring, with your locales ranging from clubs and cabarets to roller rinks and bowling alleys, all peppered with several cool details and pop culture references rendered in classic and vibrant pixel art, and several doses of humor with the NPCs littered around. Unsurprisingly, the music is also awesome is well, with a variety of classic dance tunes done in a 16-bit style guaranteed to get stuck in your head.

While the story mode is short, it is still quite enjoyable, but there’s also an endless mode for those who want a more arcade feel. Playing with the levels you unlock, the goal is simply to get the longest line and combos possible, and while it’s also fun as well, the VIP gateways and power-ups are gone, for some reason, taking away a slight bit of the fun (possibly because things aren’t as endless as they appear, because I was pretty much able to pick up every single person in a level once, with no new ones coming in).

And of course, there’s multiplayer, with six different modes supporting play for two to four players, each differing in various ways…which makes it a shame that Conga Master only supports local multiplayer at the moment, with no online play or AI bots. At the very least, I was able to get a taste of the game’s Mortal Konga mode recently with one of the developers, where the goal was simply to see who could build the longest line while occasionally sabotaging the other one. It was indeed a blast and allowed for a nice variety of play styles, and the arenas scaled out appropriately to support the view of each player. Still, it’s pretty obvious that multiplayer is the meatier part of the game, so you’re going to need some friends and extra controllers to get the most out of it. 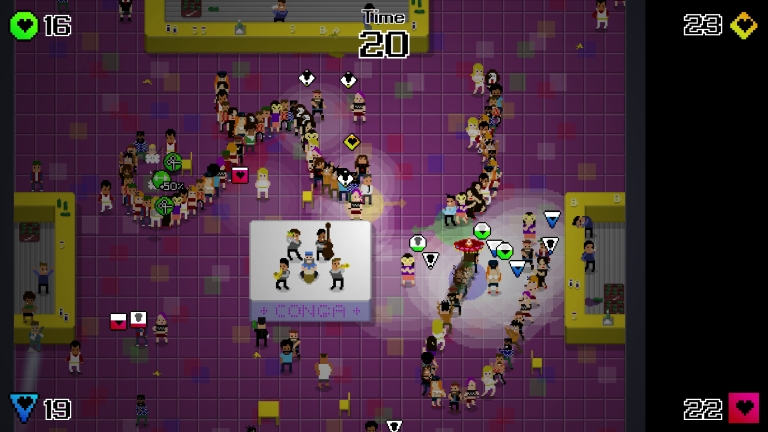 Much like the actual dance, if you can get some friends together, Conga Master is a potential blast. While it’s a bit flawed in some areas for those going solo, it’s still unique and fun enough to still consider taking a peek at, unlike trying to do the aforementioned dance by yourself. It is a bit lacking in content and could use some slight tweaks for difficulty purposes, but it still controls like a dream, looks and sounds great, and has enough solid and addictive gameplay to pack a punch. So it might not be a full-on frenzy, but this is indeed one mob that knows how to have a really good time.