Full disclosure before we begin: I have yet to play developer Over The Moon’s original genre-bending adventure game, The Fall. But it is in my backlog and I have heard good things about it, which is why I decided to check out the demo for the upcoming second part of the trilogy, The Fall Part 2: Unbound. So while I experienced a mixture of different genres as I played through, I couldn’t tell if it was any more odd or different than what appeared in the original game. On that note, I should also clarify that I mean “odd” in a good way, as it kept me interested at every turn, and suggests this may indeed be something that makes for quite the spellbinding mystery.

Picking up where the first game left off, we control ARID, an AI on a journey of self-discovery, currently inhabiting a combat suit with an additional AI inside. From the start, we have an initial section where we look around the darkened room we’re in with a flashlight, seeking a way out. The controls are easy to figure out, moving around in a two dimensional space while pointing at things to observe with the built-in flashlight. After making our way out, we find ourselves on top of a train with enemy forces attacking, where things suddenly…turn into a game of One Finger Death Punch. 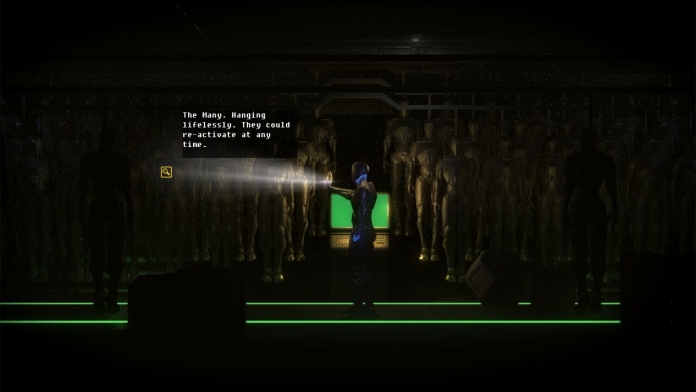 Enemies rush from both sides, and you have to strike them at the right time. Again, it controls quite well, but it’s still quite an unexpected twist. And then after that, ARID gets ejected into a global network, represented by a 2D metroidvania-style platformer where you run, jump, and shoot enemies. This was the weakest part of the demo, but still impressive, if only for the visual design (though all the various worlds encountered deserve praise in that area as well). Finally, we entered something right out of a horror game, as ARID enters the body of a robot butler, one programmed to keep serving their masters…who just so happen to be corpses that ceased to live long ago, laying around the mansion, which they still believe are alive. After some trickery and well-designed puzzles, we have our butler buddy come to realize that the family they work for is long gone, where he then heads into an existential crisis as a swirling blackness surrounds him, and then completely engulfs ARID after being ejected again, ending the demo.

So yes, The Fall Part 2: Unbound is a bit of a weird trip. Then again, Over The Moon directly used “we’ve got a collection of werid sh!^ for you” to describe the game (so weird, that even normal spelling can’t handle it, apparently), so this is a bit expected. But through these odd yet fun gameplay changes lies an adventure with a truly compelling sci-fi story inside, one that doesn’t just make for a great game as is, but also intrigues me enough to want to go and play the first game even more. The Fall Part 2: Unbound is due out in the first quarter of 2017 for PC, PS4, Xbox One and Wii U, so prepare yourself for a potentially memorable space oddity to hit then.