Remember Bulletstorm? You know, the first-person shooter from the last generation that was meant to be a humorous take on the genre? While it was sadly a commercial failure, and also a bit hit-or-miss on the humor front and subject to Poe’s Law, depending on who you ask, it had at least one great idea in the form of Skillshots. These were moments where you rewarded with points/currency for killing your enemies in the most creative and/or insane ways possible. It’s this feature which was one of the main inspirations for DESYNC, a new FPS from Adult Swim Games and developers The Foregone Syndicate, which is thankfully used to great potential.

While not on the retro side in terms of aesthetics (although the neon Tron-esque cyberspace visuals are still present), DESYNC joins recent shooters like Strafe and Dusk in being a throwback to the more simplistic yet extremely fun shooters of the ’90s. At least in terms of the combat being fast-paced and where the goal is to eliminate all the constantly-attacking enemy hordes as best as possible, anyway. Beyond that, DESYNC also has its Attack Sequences and Overkills, where you have to learn and discover a variety of special moves and techniques that deal massive amounts of damage, which results in more enemies being able to drop health, and which are even used to counter certain enemies. 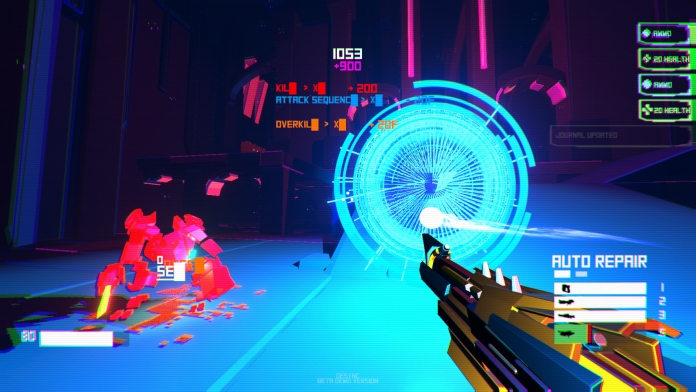 To say that it’s a satisfying system would be a bit of an understatement. One of the classic examples encountered in the hands-on demo would be the spiked wall that showed up in one arena. How you have your enemies wind up in that wall is up to you, but I went for a gun that happened to have a huge knock back upon impact. The challenge, of course, is in luring your foes to the right spot in order to blast them into impalement. It is tricky indeed, but when you pull it off, it is oh-so satisfying. It also helps that the weapons themselves are a blast to experiment around with (as is the name of the game), all providing the proper amount of oomph as you fire them off into the heads of some virtual baddies.

Speaking of which, the cyberspace look makes for some really fun, detailed, and imposing enemy design indeed, and the music itself sounds mighty fine. The fact that the game will also keep track of every statistic possible, from mouse movement to attack preferences and tallying them up as you go along makes for a game that does indeed desire to live up to its intentions of testing your FPS skills as best as it can. But crafting a carnage-happy shooter where creativity is not only still encouraged, but essential is where DESYNC takes the best ideas of games past and packs them into an extremely intriguing present, one that we can’t wait to open when it comes out later in 2017. A present filled with gunfire and giant hammers being swung at you, but a present nonetheless.