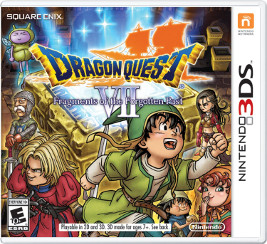 Dragon Quest VII: Fragments of the Forgotten Past

Dragon Quest VII: Fragments of the Forgotten Past was a massive critical and commercial success in Japan when it was released for the original PlayStation in 2000.  Over a year later the title saw an American release as Dragon Warrior VII, but by this point in time the PlayStation 2 was already out and this title did not garner nearly the same level of acclaim it did overseas a year prior.  In spite of this, many of us do have fond memories of Dragon Warrior VII, and following the practice that began on the Game Boy Color, Dragon Quest VII has finally received its Nintendo handheld port, with some modern updates that make the title more accessible without taking away from what made this title memorable during its initial release.

Dragon Quest VII could possibly hold the record for smallest world map out of any RPG, at least during the beginning of a new game.  The game begins as the hero (named by you, I went with Chris) living in his small fishing town of Pilchard Bay near the kingdom of Estard.  The world is nothing more than this tiny island in the middle of a vast ocean.  Chris and his friend Prince Kiefer have suspected otherwise, and enjoy running off from home exploring mysterious ruins, much to the annoyance of their friend and mayor’s daughter Maribel.  After uncovering some ancient text that is translated by the asocial scholar Dermot the Hermit, Chris, Kiefer, and Maribel revisit the mysterious temple and are transported to an unkown area.  This village appears to be in a state of perpetual night, and all the women are missing while the men tear their town to the ground in hopes the female citizens are returned to them unharmed.

This beginning sequence of Dragon Quest VII showcases a rather significant change to the game.  When Dragon Warrior VII was first released for the PlayStation, a review stated that it takes three hours before the player encounters their first battle.  The review was not lying.  It took approximately three hours to get to that first slime, which was a slow moving and boring three hours.  Remembering that was something I dreaded about doing this review, it came as a surprise that he first battle with a slime took place after about an hour, and this was taking my time exploring the tiny island.  The main points of the introduction were kept in tact but the experience was streamlined.  It still takes a while for the game to get going, but a little over one hour is much better than three, especially since the intro was much less grueling.  The rest of the game’s content is just as huge as we remember and this title can still be a great time sink, but some of the more boring fat has been trimmed.  There are some players who may miss the temple puzzles from the PlayStation version, but they are not as a part of Dragon Warrior VII I have fond memories of. 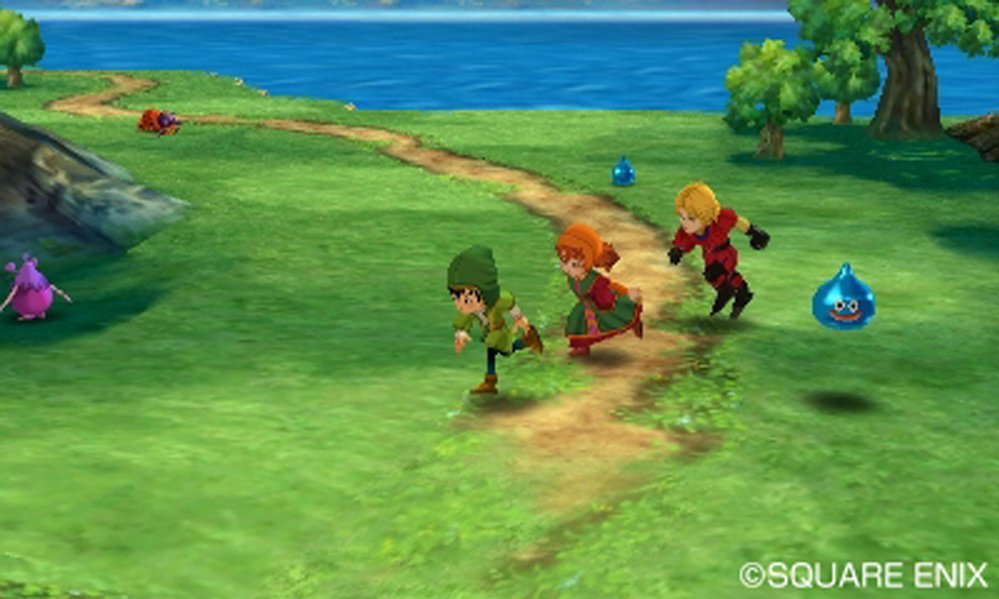 After returning from this new area, a new island has suddenly appeared on the world map.  Visiting this island reveals it is the area the party was just at, but they speak of the events we just completed as taking place in the distant past.  Eventually the party members figure out that the various shards they collect and reassemble on the pedestals take them to islands a long time ago in the past.  By intervening in whatever calamity is about to happen, they end up saving a village from a terrible fate which in turn allows the island to appear in their present time.  Doing this repeatedly causes more islands to appear in the present, making the world map look like a proper RPG world map.

As a Dragon Quest game, there are certain things longtime fans have come to expect from these games and this is no different.  Dragon Quest games have always had the same composer and artist, Koichi Sugiyama and Akira Toriyama respectfully, so the music and art direction will feel like a Dragon Quest game, complete with familiar monsters to kill.  Series creator Yuji Horii was involved in the writing which also contributed to the fact that all Dragon Quest games do feel somewhat connected.  The light hearted and simple narrative themes are present, as well as the different accents used in each location.  This is one aspect where spoken dialog would have been nice since reading the different accents can occasionally make it difficult to figure out what someone is trying to say, but I guess that replicates the feel of travelling to a foreign land.

The turn based battle system is the familiar system that has been seen in Dragon Quest games over the past thirty years with a few tweaks and upgrades.  The actual battles play exactly as they did in the original release and the changes are cosmetic.  Every character’s action is selected, and the the party members and enemies carry out their actions in an order influenced by agility.  The presentation is different, instead of it being a first person perspective for the whole battle it is only first person when selecting the action.  After that it switches to third person and animation has been added to show the player characters and enemies attack each other.  An actual game play change to battle system is that battles are no longer completely random encounters.  The enemies are visible on the map while traveling, just like in Dragon Quest IX.  This makes it possible to dictate the frequency of battle, at least to some degree.  Battles are necessary to gain experience and gold, but sometimes you just want to run through an area in peace to get to the next area without being bothered with combat. 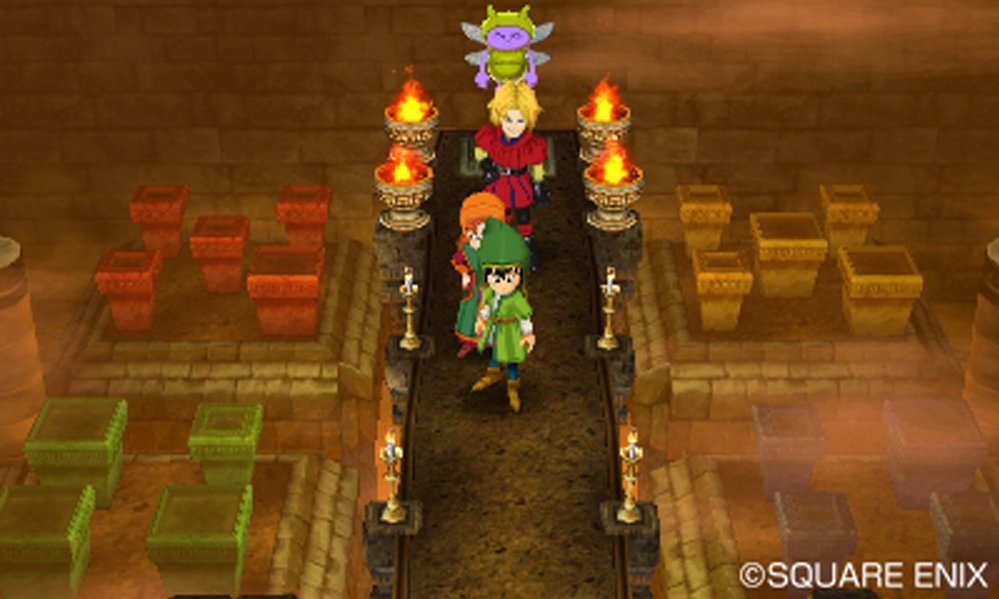 Dragon Quest VII has a very complex and rich job/class system that unlocks after a few islands have been saved.  This system allows for the intermediate and advanced classes becoming available once some of the more basic classes are mastered by the player.  A gripe about Dragon Warrior VII is that as great as this job system was it required an extremely massive amount of grinding time to fully take advantage of everything it had to offer.  This 3DS remake has the battle point cost for most classes to level up reduced by one half or one third.  This still makes this job system very time consuming to fully take advantage of, but compared to the original release this is much more manageable.

The graphics and music have been given a major overhaul.  The music sounds fuller and just overall higher quality than the PlayStation version, but beyond that it is still the same soundtrack we remember from a decade and a half ago.  The graphical upgrade on the other hand is night and day, the art direction followed the example set by the battle system and now resembled Dragon Quest IX, which is a vast visual improvement over how Dragon Quest VII originally looked.  A few of the changes take some getting used to, for example Kiefer kind of reminds me of Gary Busey now.  Enemies are constantly moving in battle now, making everything seem much more alive than in the original release. 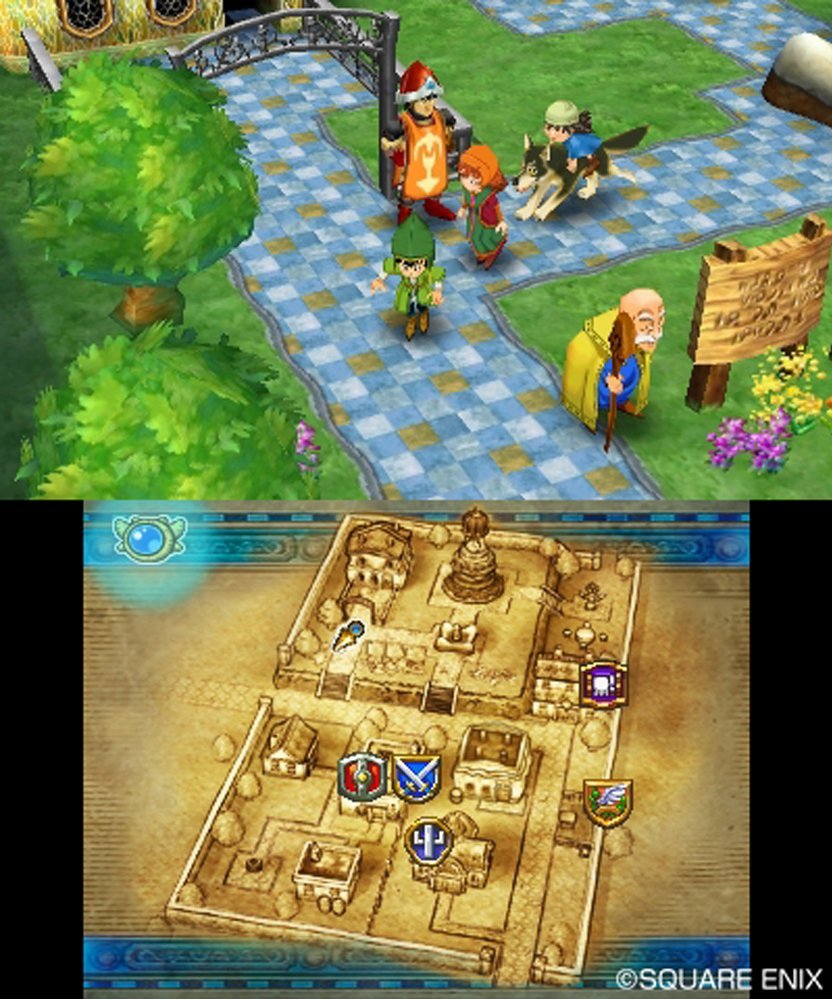 Dragon Quest VII: Fragments of the Forgotten Past takes a fragment of gaming’s forgotten past and breathes new life into it.  Some of the more hardcore Dragon Quest fans may find the reduction in job grinding time and streamlining the intro a negative change that dumbs down the game, but I would argue that it also makes the title more accessible and more fun.  Dragon Quest VII: Fragments of the Forgotten Past is essentially the same game we remember from the PlayStation except it has been updated and improved.  It is still a sixteen year old game and will play as one, but the changes to the battle system and other upgrades make it feel much more contemporary and it holds your interest better the original Dragon Warrior VII would.  As with most Dragon Quest games, the story and overall tone are simpler and more lighthearted than a Final Fantasy or Dragon Age title, but that has always been part of the Dragon Quest charm.  This reissue improves an already great game and any fan of the Dragon Quest franchise needs to have played it.