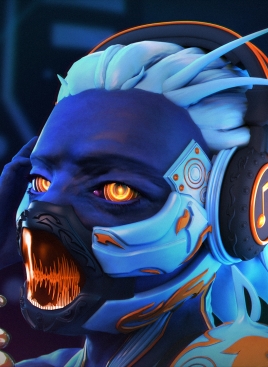 Peanut butter and chocolate. It’s the go-to combination for when you need when you need to compare a hybrid of elements to something that works. And given the experimental nature of the indie game scene, you wind of with a lot of titles that end up getting compared to the classic Reese’s duo. So mixing genres together to create something unorthodox isn’t exactly something new, and Klang isn’t even the first rhythm game/platformer hybrid to cross our paths, but its additional heavy emphasis on EDM and electronica aesthetics combined with a surreal, dialogue-free narrative still have it coming off as quite the unique treat indeed. But is this a combination that is indeed as delicious as peanut butter and chocolate, or to switch to a more appropriate music comparison, is it as ear-grating a combo as hip-hop and country?

Set in a land of dark neon colors, Klang casts you as a rave warrior armed with a pair of giant tuning forks that has been kicked down from the music equivalent of Olympus by Soundlord Sonus, and now has to fight his way back up. In the process, he has to confront the walrus man, traverse Limbo, defeat a death angel, occasionally deal with a giant skeleton figure representing pirated music…ok, the basics are there, but the story is a bit tricky to figure out, more than likely due to a lack of dialogue as a stylistic choice. That said, it does indeed work in creating what feels like some sort of epic mythological journey, as mentioned with the Olympus analogy back there (although it could be an intentional homage to Greek mythology, and like an idiot, I’m missing something obvious). So at the very least, the narrative will manage to captivate you.

Of course, Klang’s visual style will help in that area as well. The blue and orange color scheme is used perfectly, with the shades switching depending on your health and combos, such as purple and green when you’re doing well. It’s a standard mixture of hot and cold, but it still allows everything to stand out in such a vibrant and attractive way. There’s also a lot of detail in the backgrounds as well, and the unique character and enemy design. The animation and cinematics are also superb as well, though the game itself will let you know if your hardware isn’t up to snuff when it comes to handling it. That said, it told me an integrated graphics card didn’t meet their minimum requirements, but worked fine for me, just for the record. 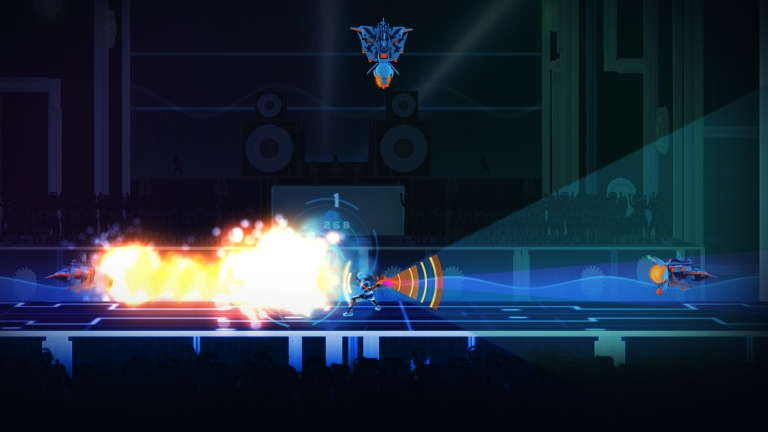 Oddly enough, though, there are moments when Klang’s graphics actually feel like they work against it. In particular, whenever the screen gets too packed with button prompts, enemy fire, movement, and such that it makes it hard to pay attention. This can be seen as part of the challenge, mind you, but it does feel a bit cheap at times. Then again, the controls are nice and simple, and after a few tries, getting adjusted to the chaos becomes a bit easier.

On that note, Klang’s basic gameplay is rather superb. Best played with a controller, the core elements involve moving around with the left thumbstick as a trio of guns/enemies surround you, firing in tune with the beat. Guided with the help of various meters that fill up, you have to move the right stick at the the correct time to be in tune with the music and deflect the blast back, along with the occasional surprise diagonal attack. You also have to jump with left trigger at the correct times when prompted to jump, and the right one to duck (with seem like odd button choices at first, but end up working perfectly).

So it’s your standard Simon-esque setup, but the platforming elements are where the twist comes in. While deflecting blasts, you also have to move around in order to avoid various obstacles such as giant beams, or while leaping across a series of disappearing platforms, or having to hit them perfectly in order to move an elevator-like device around. You also have more traditional bits without the guns around you to work with as well, like wall-jumping in time with the music at just the right time when the wall isn’t electrified, enemies whose line of sight corresponds with the beat, or even the classic giant fans that push you back. Klang always does change things up, and while adjusting to these changes can be a bit tricky, they do make for some interesting level design, if short but sweet. 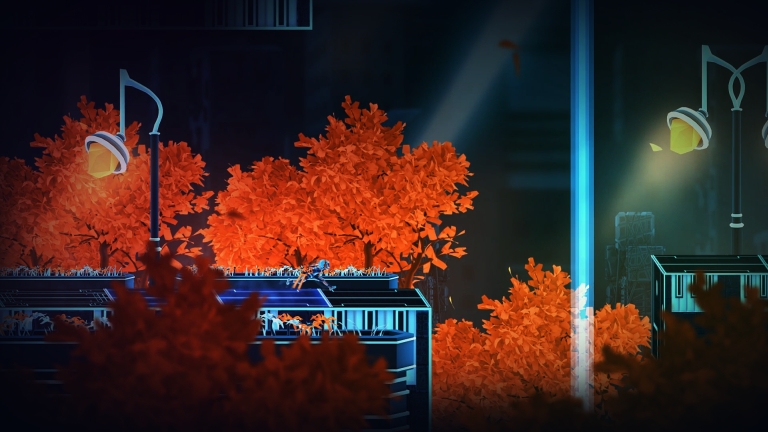 However, one particular problem with Klang that shows up in it is that while it does more action-packed, fast-paced platforming perfectly fine, it ends up floundering a bit whenever a scenario calls for precision platforming. Part of this is because any moment that requires concentration contrasts with the electronica and chaos going on all around you, and part is because for some reason, the controls can get especially sensitive at times. More than a few moments I found myself tilting the joystick ever so slightly to the left or right to either move into a safe area or adjust myself after a landing, and our hero would suddenly dart off in that direction instead, as if a rocket went off in their pants. And with more than a few sections relying on having to make it past timed searchlights with immediately fire beams that kill you in one hit, or just having to jump between tiny platforms above bottomless pits, these control slip-ups can get a bit frustrating (and take a wild stab as to what obstacles the final boss uses).

Speaking of one-hit kills, I applaud Klang for trying to keep the variety up with different level designs and obstacles, all allowing for unique challenges, but this does create an unfortunate side effect of having an uneven challenge at times. In just the game’s second world, you have to escape from an advancing beam of death while making sure to jump or slide at just the right moment, while also dealing with enemy fire. However, the way it was structured, even taking just one hit meant instant failure with no chance of recovery. The same goes for sections where have to deflect shots while over a pit in order to create platforms to jump to, with old ones disappearing. But because shots only fired in tune with the music, it meant missing even one causes you to plummet to your death. In contrast, there are combat sections in even the final levels where it seems like you can just flail the joystick around, miss half the cues, and still survive (albeit with a low score).

Klang can be completed in just over two hours, but that only covers the basic story mode. There’s still a series of bonus levels, hidden tracks in various levels, and an unlockable Nightcore mode that ramps up the difficulty afterwards, not to mention what appears to be a true ending to unlock. Basically, there’s still a lot of content to experience afterwards, including an actual Pirate Bay where you can just listen to the music. Unsurprisingly for a rhythm game, the soundtrack is a true highlight, with the EDM tunes of bLiNd being pulse-poundingly perfect for the more action-packed segments of a game such as this. 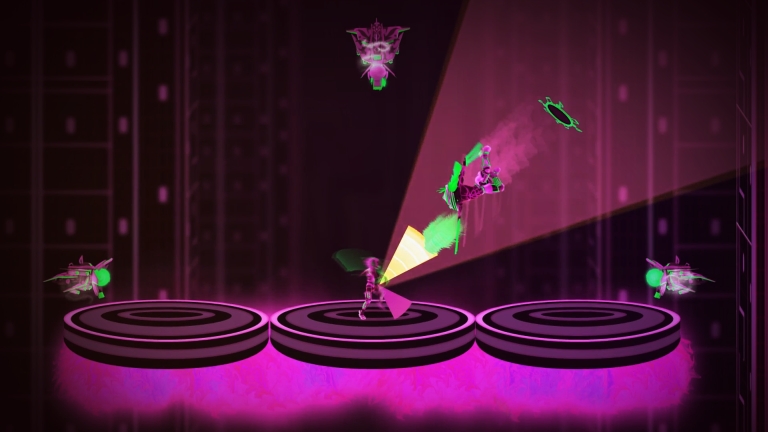 Klang’s take on rhythm platformers is indeed a unique one, in both aesthetics and gameplay, and despite some frustrating moments and uneven difficulty holding it back, its variety of levels, attractive look and sound, and easy-to-learn-hard-to-master gameplay can still make for a highly fun experience. That, and you’re probably going to need to play it at least more than once to decode just what the heck is going on with its story. Joking aside, this electronica-infused action and rhythm game isn’t quite as delicious as peanut butter and chocolate, but still manages to make for a combo that’s a decent taste and a good sound. Sure still beats the hell out of the mess that is hip-hop-inspired country (looking at you, Florida Georgia Line).