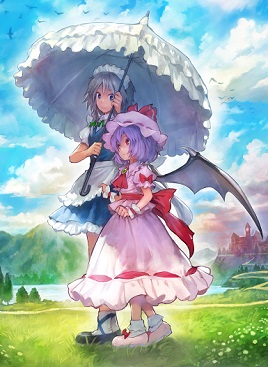 In order to keep things on the up and up, it should be noted that this reviewer has no prior experience with the twenty year old Touhou Universe. As a franchise, it is exceedingly popular in Japan, to the point where numerous fan projects are set in the IP. Unlike other copyright holders who are notoriously protective of their property, the Touhou Universe enjoys a policy of openness, encouraging the enthusiastic to not only create their own works based on the long running series, but to profit off it as well. This brings us to doujin developer Ankake Spa who have created Touhou: Scarlet Curiosity. The game managed to become so popular that publisher XSEED decided to take the title and bring it to Western audiences for the PlayStation 4.

The game stars vampire Remilia Scarlet and her ever loyal maid, Sakuya. Over the course of five hundred years, Remilia has found herself getting bored with life. Being stuck inside all day, only being allowed to emerge at night has taken a great toll on her sanity. (Somebody should tell her about video games.) She happens to learn of a monster residing in a lake nearby and decides that attempting to slaughter might provide good sport. This quest didn’t turn out so well, as it wasn’t present when she arrive. Apparently, it was busy trashing her place. Far from being upset, the heroine takes no small amount of glee with this news. She now has a purpose, however short lived.

For an uninitiated audience, what really draws the eye to this title is the melding of Diablo style of action/RPG combined with bullet hell screen filling patterns. Watching the trailer yields a new realm of possibilities, leaving open a chance to scratch two gaming style itches at once. Indeed, this combination does work in the game’s favor and serves as the highlight of the experience. While not as prevalent early in Remilia’s quest, the skill required to dance between incoming ordinance with dodges and close the gap to land a quick flurry of punches creates some memorable moments. There’s something special about jumping over a wall of bullets, timing a dive attack to land right when there is the briefest pause in the flurry, and landing a combo that finishes off a bothersome foe. 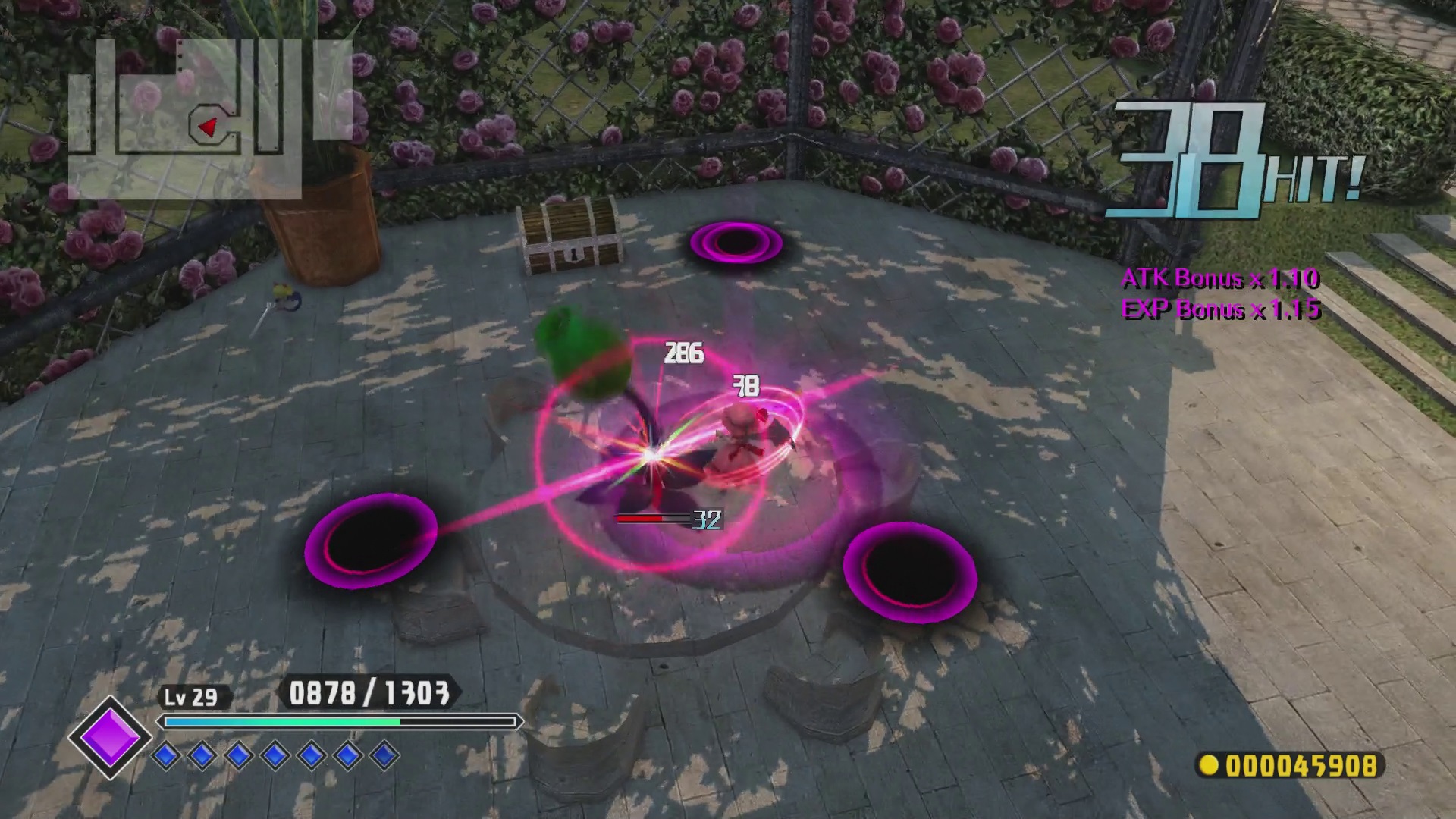 This is about all the title has going for it, however. Outside of the boss set pieces and areas with more complex enemy placement throughout the levels, the rest of the gameplay tends to be rather dull. Basic enemies take too many hits to finish off before moving on. This is even factoring in keeping an eye open for new equipment and the fact that higher combos increase damage output and experience points. Traversing a level becomes an exercise in rote button mashing with none of the feeling of power that can come from other titles that share similar traits. As a quick example, the average Dynasty Warriors title also requires flogging attack like it just made a rude comment, but the onscreen result is enemies screaming and flying in all sorts of directions. Here, they just take the hit and come back for much, much more.

The equipment drops that are present to add a carrot to the end of the stick also underwhelm. When one plays this type of game, repetition can be quickly and easily forgiven when there’s lots of new and cool loot to find and equip. In Scarlet Curiosity, the item drops tend to be few and far between. When a new item is found, it’s typically a duplicate of a previously found and equipped item that might have different stats. Usually, though, the stats are worse. There are varying levels of rarity to help, but finding even an uncommon piece is exceedingly rare. 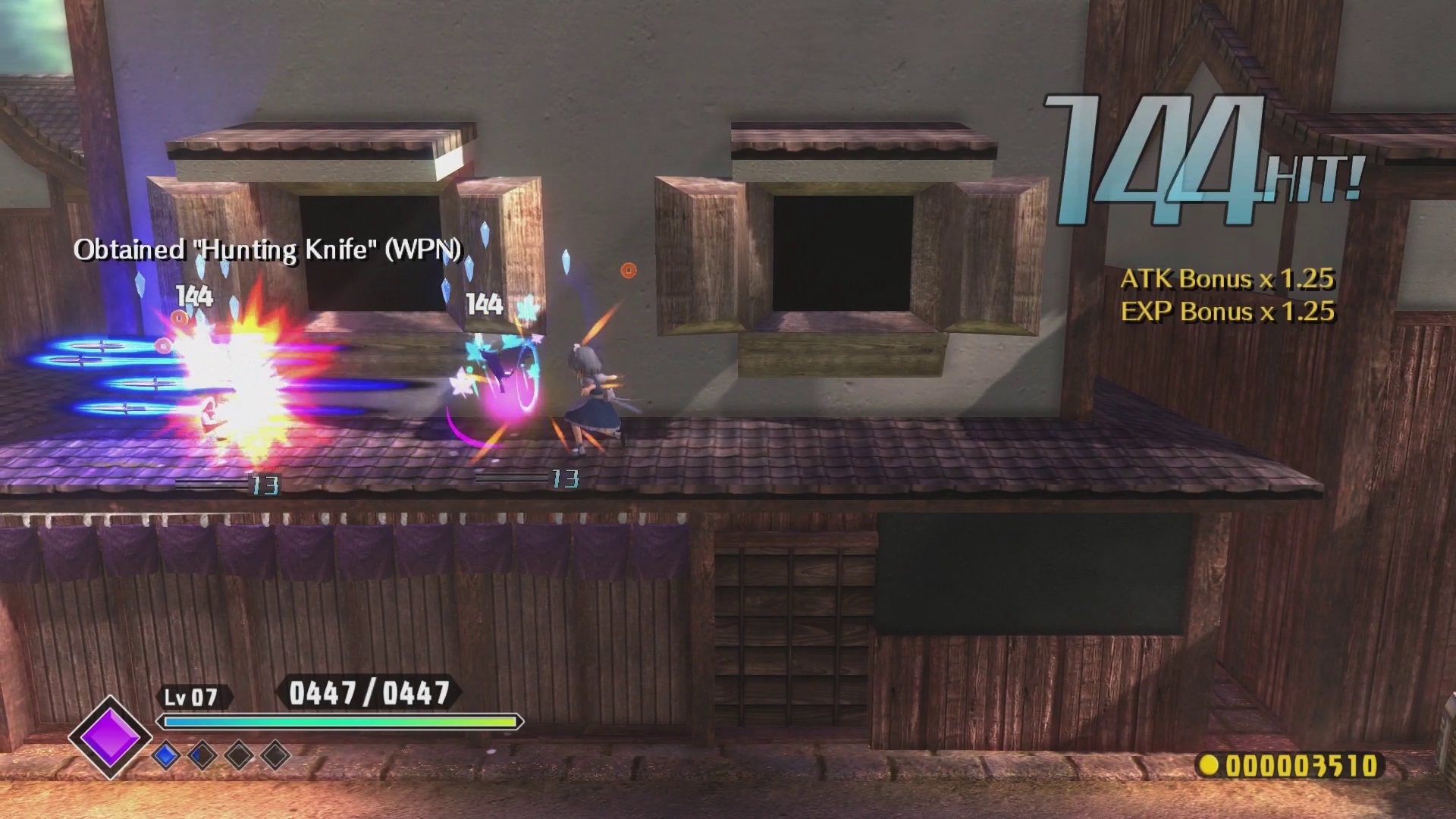 There is also a bit of issue regarding the controls. It doesn’t look so bad during gameplay videos, but when the pad is in hand, it feels a bit spongy. While it’s nothing game breaking, there is a consistent lack of precision while moving the heroine through the environment. Because of this, ranged skills are often missed and close attacks feel like they trigger just a hair after they really should. It’s not bad to the point where a platforming section gets hosed, but there is a pervading sense that that action is somehow…off.

The same can be said regarding the look of the game. Again, this is a doujin game and doesn’t have the benefit of experienced professional artists and level designers behind it. Scarlet Curiosity does run a 1080p (at least according to my TV), and never dropped below 60fps during play, no matter how hectic it got. Still, considering the overall lower end quality models and effects on display, it would have been severely baffling should the framerate even choked slightly. Basically, it has the appearance of an early PlayStation 2 era title. 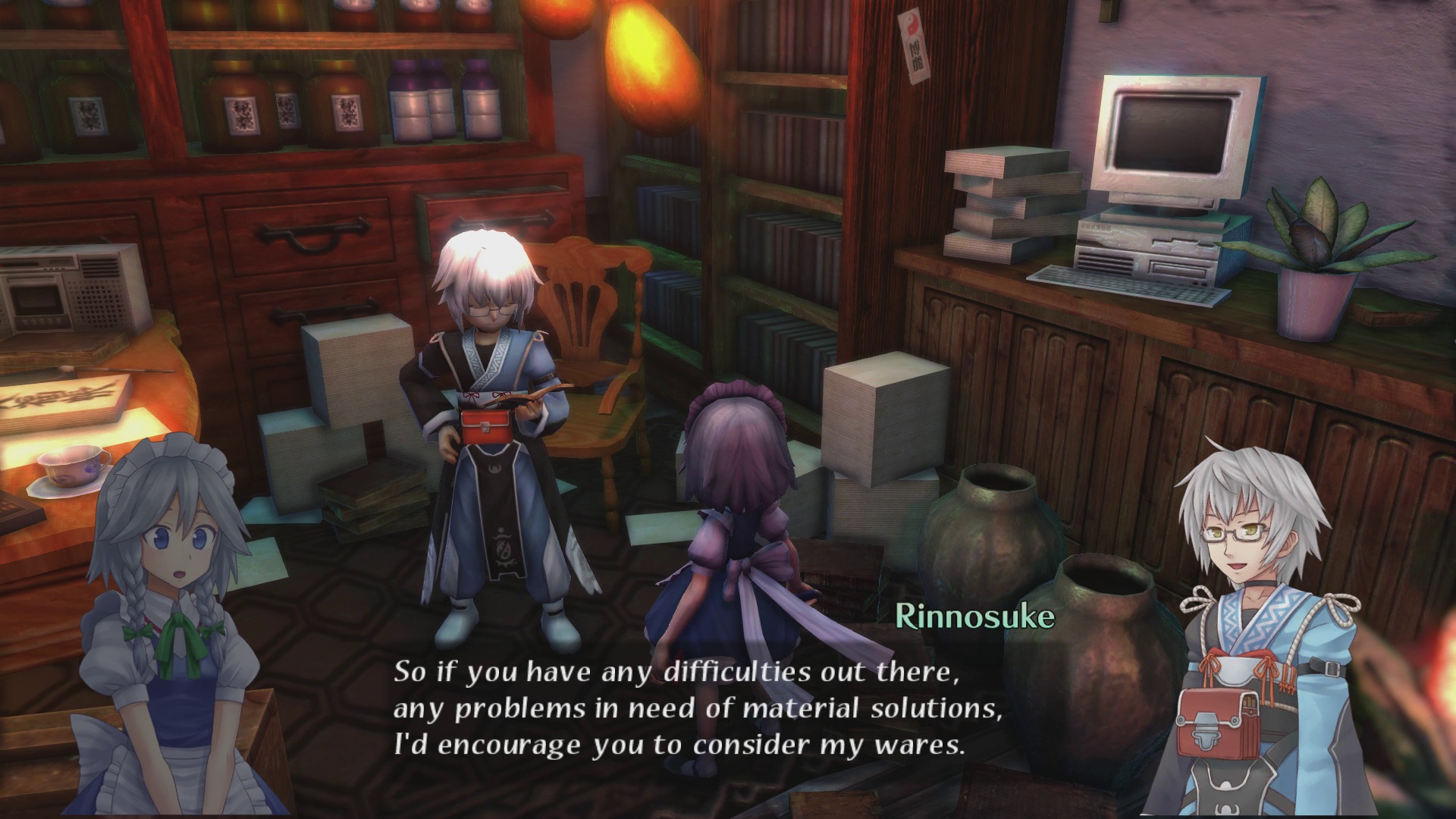 Fans of the Touhou Universe might be interested in how well Touhou: Scarlet Curiosity captures the look and feel of the franchise along with how the title fits in with established lore. Lamentably, I cannot answer this. It is pitched as a standalone story that offers zero confusion for the newcomer. Whether or not the newcomer should bother is an entirely different story. The concept of marrying a bullet hell title to an action looter is absolutely one that must be revisited. The excellent moments where the action heats up and the player is forced to rely on instinct and control elevate the game. Everything else, however, screams of a title in need of more fine tuning. The graphics lack style or pizzazz and the controls have a wrongness to them. This Touhou title isn’t terrible, but the curiosity of its mash up is all it has.