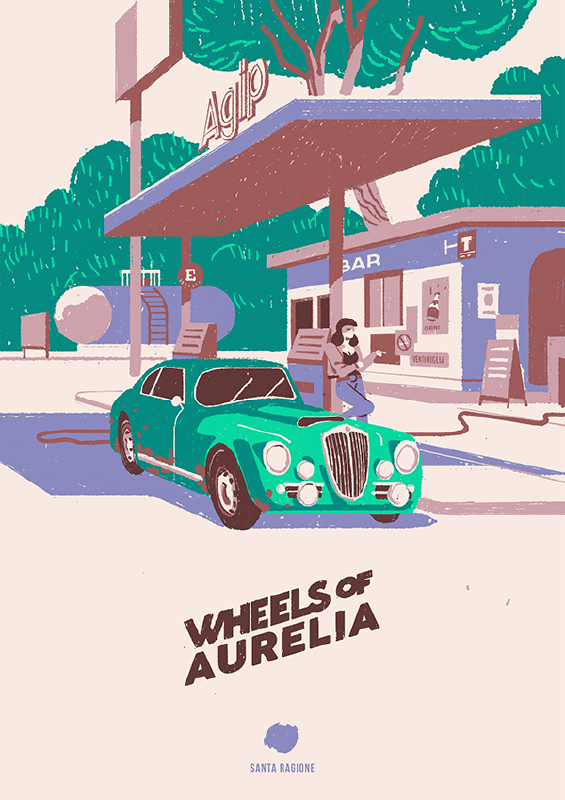 Although video games have existed for decades, it was not until the likes of Dear Esther in 2012 that the concept of a “walking simulator” really took hold. Since then, we’ve seen all manner of titles focus almost exclusively on their narrative – sometimes at the expense of compelling play. While walking or interacting with objects is indeed a form of “gameplay,” it’s one that often fails to engage some members of the gaming community. This is what leads to folks occasionally deriding any narrative heavy game. Wheels of Aurelia is an odd creation which brings together a strong narrative and character focus with a respectable dash of gameplay. Instead of walking around some enigmatic place, you’re now driving across Italy’s stunning coast – the Via Aurelia. With colorful, winding streets and multiple pathways, players will discover that each trip down the road is quite different from the last.

Protagonist Lella begins her journey jonesing for a cigarette and desperate to leave home. We don’t know why right at the start, but she does make the bold move to drive, drive, and drive some more for miles on end. She starts this trip with another young woman named Olga. Despite their very different personalities, friendship may bloom during their drive. Or perhaps she’ll be left at the side of the road. You see, it’s hard to pin down one main storyline as the “correct” one when there are sixteen different tales in all. The setting of Italy in the 1970s brings another layer to the storytelling. Alongside our fictional characters and their plights, we’re also treated to the button news of the moment. This includes the Moro kidnapping, recent legalization of abortion, and more. After all, when you’re on a road trip, political chat tends to rear its head at one point or another.

Much of the experience of Wheels of Aurelia revolves around talking to the folks in your car. Passengers generally change based on dialogue and route decisions. If you suggest it’d be better to part ways with someone, then they’re basically going to oblige. Going left instead of right at a fork in the road changes what events you see, who you meet, and where you’ll eventually end up once the game concludes. This is a smart design choice as each path only takes about fifteen to thirty minutes to complete. Taken by itself, that would be an incredibly short game. But it’s not about just seeing one ending. The experience is best enjoyed by traveling different paths, trying new dialogue options, and seeing how Lella’s life – and the lives of those around her – changes based on such fateful, brief decisions. Each character is well written, though it’s funny how each person apparently has one really huge secret waiting to be revealed betwixt idle chatter. 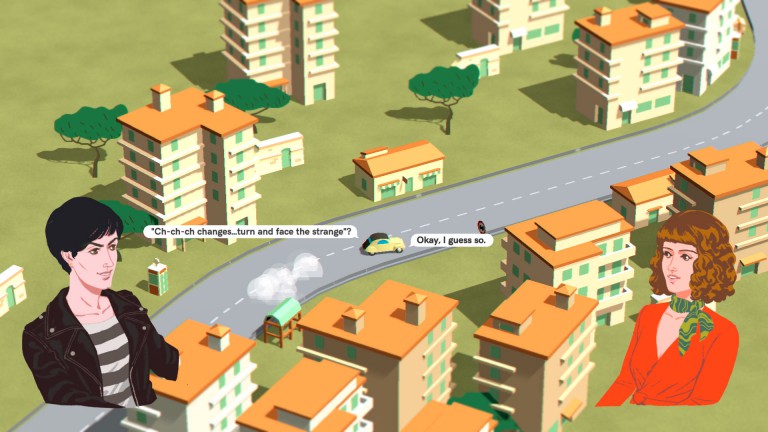 If there’s a failing of the writing, it’s simply that it is so strongly choreographed to fit in a bite-sized gameplay session. Relationships between Lella and her partners go from zero to something much more meaningful, which feels a little rushed on occasion. The good thing is that multiple playthroughs allow players to learn more about each character by making different dialogue choices or seeing new prompts which lead to fresh lines of dialogue. After a handful of playthroughs on the same route, however, you’ll have basically seen everything a character has to say. At that point it becomes much easier to simply ignore them (yes, this is an option) and go ahead with focusing on actually driving.

You see, driving is often made to become a big part of Wheels of Aurelia. By default, the car drives itself and usually stays in its lane. There’s no damage or lose condition so driving safely isn’t a concern. Still, there are multiple story moments which require players to drive exceptionally well to succeed. Failing these moments simply results in seeing a different ending instead. Still, most will eventually want to see the results of winning a race, for example, and that can be more challenging than it should be. Generally, the NPC cars in a race do not seem to mess up much. Beyond that, depending on the car you have, you may be at a disadvantage to begin with. Don’t expect to both race and chat at all. When precision and speed are the name of the game, even looking at the dialogue prompts often leads to hitting another car or wall. 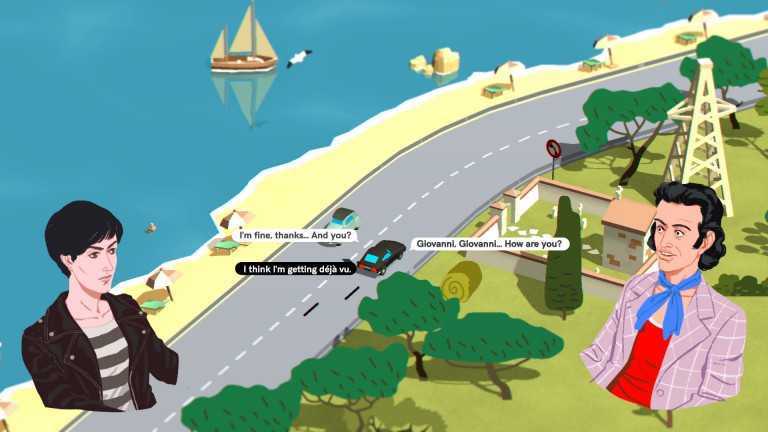 The biggest challenge with completing Wheels of Aurelia is that the last few endings are a little tougher to come across. Without taking notes, you’ll find yourself forgetting which paths or option combinations you’ve not tried thus far. Then there are occasionally key landmarks to stop at, which can accidentally be avoided because you’re driving too fast. Wheels of Aurelia does unlock access to a speedy police car after completing ten endings, but it would have been nice to get it sooner. With a faster car comes faster playthroughs which is imperative as you work through multiple test runs to find the next new ending. With sixteen endings in all, a complete playthrough ends up somewhere around five or more hours due to the amount of replaying required.

Wheels of Aurelia is paradoxically both immensely relaxing and frustrating in its repetition. After seeing the same dialogue prompts and (admittedly gorgeous) scenery for the umpteenth time, you just wish it were possible to rewind to the choice points which determine endings to make a new choice. As there are no save points for each brief journey, there’s never a way to save right before a decision point in order to try everything out from that point onward. It’s sad to see what is originally really compelling gameplay become somewhat tedious. The saving grace is that the writing is skillful, the 70s inspired soundtrack is simply divine, and that art-wise the game is absolutely on point. 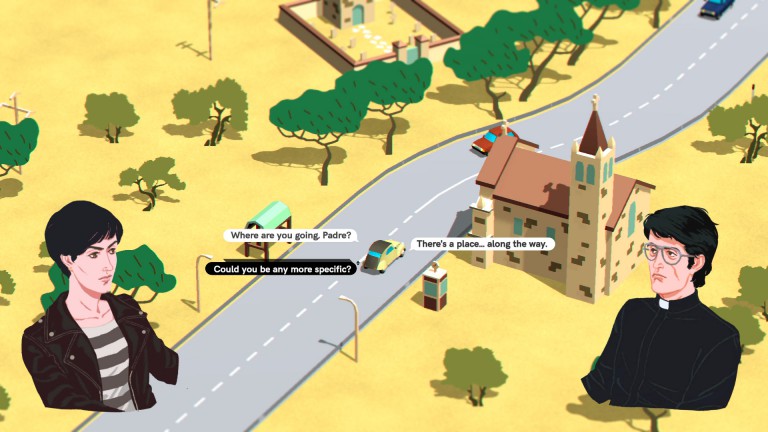 It might sound like Wheels of Aurelia is a slog, and although it can feel that way on occasion, it is still an enjoyable jaunt across the Via Aurelia. The best suggestion is simply to not attempt to beat it all in one sitting. It’s only after a fourth or fifth replay in one setting that the grinding nature becomes apparent. Playing the game in small chunks and picking it up another day seems the best way to enjoy all that Wheels of Aurelia has to offer. Finally obtaining all endings might be a bit of work, but in the end it’s worth it. Lella’s journey is compelling, and the game itself is unlike anything we’ve seen before.