Have you ever played a modern video game and just be suddenly struck by a feeling of familiarity? And not just because the game is part of a long-running franchise, or a retro throwback, or anything like that? That feeling just came over me when I was playing the demo for The Frostrune, a new graphic adventure game from Snow Cannon Games and Norway-based developers Grimnir. All while going through the point-and-click adventure on a tablet (where I guess it’s more point-and-tap, but the same deal applies), I kept getting this nostalgic vibe, even though I didn’t necessarily know where it was coming from. Then again, all that mattered in the end was if the final game was still a quality product, and thankfully, The Frostrune is heading in the right direction so far.

I suppose that The Frostrune may have triggered memories of old Macventure games like Shadowgate or Déjà Vu (somewhat appropriately with that last one), as like them, all of the action takes place on single screens in a first-person view, where you travel by simply clicking where you want to go, and interacting with items in the same fashion, in an easy-to-use and highly effective control scheme that comes with the genre. It even had a similar simple setup and initial plot present in such games, where you just find yourself shipwrecked on a mysterious island with an old village and an ancient mystery to solve. 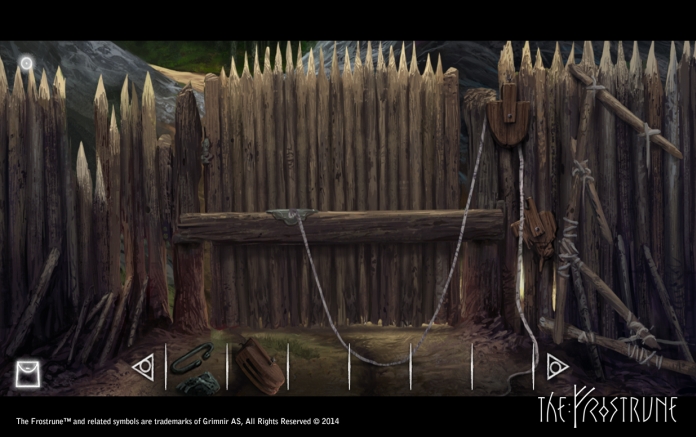 But I felt like beyond the basic gameplay, these was more to it than those pixelated deathtraps triggering my nostalgia sense as I played The Frostrune. Of course, it could also be the fact that it has heavy sprinkles of modern indie game styles and mechanics present as well. Much like Never Alone or Aurion: Legacy of the Kori-Odan, emphasis is placed on bringing stories from a certain kind of lore – Viking lore, in this case – to a wider audience. And it shows, with the game’s art style greatly evoking ancient Norse imagery, and the initial bits of story providing what will hopefully be a deep tale rooted in Norse culture. Hopefully, it will also avoid the mistakes of the two previous games and make sure gameplay comes first, though.

It also has a unique mechanic involving the ability to see between different dimensions in order to solve various puzzles and view past events one you’ve uncovered the titular rune, but sadly, it only showed up for a moment at the very end of demo, without any real example as to how it provides an impact on the gameplay. What was on display was a series of simple puzzles that reward exploration and the the ability to pay attention to details, such as figuring out the correct combination of faces set into a door to turn three keys to. The type of introductory puzzles you would find at the beginning of an adventure game, which were well-executed.

So while a sample of The Frostrune suggested something familiar that I couldn’t quite put my finger on, it also suggested that it may lead to an intriguing adventure indeed, a story with the right amount of supernatural elements that gives just enough of a detailed look into Norse folklore. And while there isn’t much in the way of animation, the graphics are quite impressive (even if some of the assets in this early build were missing) and enhance the Viking mood even further. The Frostrune is set to come out later for both PC and mobile devices, and pardon the pun, but it may be the type of chilling tale worth looking out for.