One of the great things that has come out of Nintendo handhelds are the reissues of the classic games of yesteryear.  While Dragon Warrior never hit the level of popularity in the States that it enjoys in Japan (where it is called Dragon Quest), it still has a sizable and devoted following, one that warranted the reissue of the NES Erdrick trilogy on the Game Boy Color and later the Zenithia trilogy on the DS.  With the recent 3DS remake of Dragon Quest VII and the upcoming Dragon Quest VIII and Dragon Quest Builders, this seems like an ideal time to dust off the square grey cartridge and return to the first adventure in Alefgard, which was reissued with the second game in Dragon Warrior I & II for the GBC in the year 2000.

Dragon Warrior was designed to be an RPG that was accessible to a wider audience than the more complex contemporary titles.  The overhead perspective used in the world map and dungeon exploration was inspired by Ultima, with the first person random battles showing an influence from Wizardry.  The open world of Alefgard featured no physical barriers, encouraging the player to explore freely.  However, certain areas contained stronger enemies that required better equipment and an increased level to survive, so this helped guide the player in the direction they should take.  An example is when the player tries to travel to Rimuldar, doing so without knowing Stopspell is going to make fighting a warlock extremely difficult.

The story is the player takes the role of the hero who is the descendant of the legendary hero Erdrick who must slay the Dragonlord to prevent the world from entering a state of eternal darkness.  The story is goal driven, and there is no place that the player travels to that does not either offer a reward or fulfill some requirement to advance the story.  To help keep the player focused on the ultimate goal in what was considered an enormous game world at the initial release, the Dragonlord’s castle can be seen the moment the player steps outside of Tantegel Castle.  The Dragonlord’s castle is not accessible until much later in the game, but this placement was a deliberate decision to help the player keep the eyes on the prize.

Looking back on this title, it is very simple by modern RPG standards.  To be fair, many RPGs we enjoy today owe their popularity and existence to titles such as this who laid the groundwork for what was to come later.  Dragon Warrior features a single character party who possesses great physical strength as well as magic using prowess. All enemies, designed by Akira Toriyama, are fought in one on one turn based battles.  The majority of the game is spent grinding for gold and experience, both of which take a considerable amount of time but getting a payoff like the hit point regenerating magic armor makes it worthwhile.

When Dragon Warrior was ported to the handheld system, a few changes were made to modernize it.  The most obvious change to people who have played the NES game is that the Elizabethan English dialog is absent with the new translation, so the old exchange with Princess Gwaelin (now Lara) of “dost thou love me?” no “but thou must!” until the player relents and says “yes” is sadly absent from the remake.  The translation also changes the name Erdrick to Loto, which is closer to the original Japanese version.  The Dragonlord is also now known as the Dracolord.  A few changes have been made to the game play as well.  Enemies give increased experience points and gold, reducing the amount of grinding that is required to get strong enough to survive Charlock Castle and afford the proper equipment making the game more enjoyable.  The couple instances of boss fights, such as the green dragon in the cave to Rimuldar or the golemn guarding Cantlin have had their stats increased dramatically to be actual boss battles instead of being simple enemies. 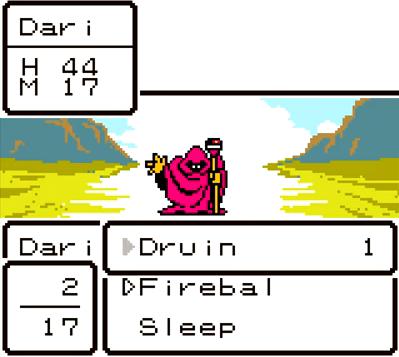 Dragon Warrior II is where the series begins to show more of the modern RPG tropes.  This is where the player begins as a powerful but magicless warrior, but gains two party members over the course of the game.  The first is the Prince of Cannock, who is a mediocre fighter and mediocre magic user, and the Princess of Moonbrooke, a powerful magic user and weak fighter, who is also a real dog until she gets a good look at herself in the Mirror of Ra (Lar Mirror on the GBC).  The extra help is needed as enemies will attack in groups, some of which can turn into nearly endless battles when they constantly call for reinforcements.  Dragon Warrior II has a much larger world and more quests for the player to undertake before they can enter Rhone and defeat Hargon.  This title also introduced ship travel, which is a feature that would end up returning in future Dragon Warrior titles.

Dragon Warrior II on the GBC also features a new translation and additional tweaks to the gameplay.  Some of the nicer additions to gameplay include locked doors opening automatically if the proper key is in the inventory instead of having to open the menu and select DOOR.  A new and extremely welcome change to battle eliminates wasted attacks.  In the original NES Dragon Warrior II, which is also true of the Squaresoft competitor on the NES, if a character is assigned to attack an enemy that ends up getting killed by another character’s attack, the action is wasted as the character will beat the monster’s corpse.  In the reissue, the character will randomly attack another enemy if the intended target is dead.  This does slightly dumb battle strategy, but I still say this was a change in the right direction. 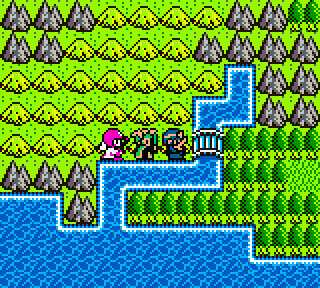 Dragon Warrior I and II show their age and hardware limitations when played today.  As such, players experiencing them for the first time thirty years after the fact may not be impressed by what would now be considered a simple RPG.  Older players may have fond memories, since at the initial release these were very unique and original games.  This is also where a lot of the groundwork for RPGs was laid.  Final Fantasy was released between Dragon Quest II and III, and both series was shown a lot of growth since their initial releases and have influenced many subsequent RPG franchises.  A game director whose work I admire recently discussed the importance of revisiting past titles, and while Dragon Warrior I and II might not have as much depth and complexity as later entries in the franchise, they are worthwhile titles for Dragon Quest fans to familiarize themselves.