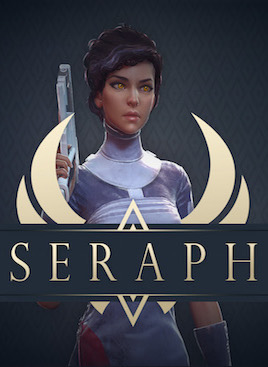 The survival, the crafting and the procedurally-generated world. If ever there was the [un]holy trinity of frown-postured taboo at the grass-root level of discussion on upcoming video games, this would be it. Granted, each of these elements can prove (and have proven) themselves worthy, but it doesn’t take long to realize that for every respected success comes the inevitable plethora of games that end up diverting most resources, if not all attention unfortunately, to at least two (and sometimes all three) of these factors. Crafting especially becoming the go-to filler for AAA management with superficial tendencies to make players feel “involved” with the in-game items presented. I give credit where credit is due to Dreadbit for finding a way and a means to link not one, not two, but all three of these proclaimed “warning signs” into their game. Especially when the game itself makes no intention to have the experience lean all that heavily on any one of these aspects.

Seraph instead stakes its claim on something altogether more active and, dare I say it, exhilarating. The kind of exhilarating, action-orientated style of play any twitch-keen, reflex-strong, hack-and-slash player would be more than keen to attempt. It’s a game, though at times creeps into the realms of survival and at select moments requires a certain grasp on the governing rules of the game’s crafting system, primarily sets both its vision and its mechanics on the satisfaction of feeling near-invincible and ultimately utterly stylish in doing so. The kind of unmitigated style through which Dante, Bayonetta, [Viewtiful] Joe, The Hunter and other Japan-created characters have become ingrained in our memories.

Dreadbit’s newly-created titular character may not, in the long-run, become as acclaimed as some of these same great video game icons, but the same — fortunately — can not be said for the game itself. A game that, like other 2016 outings in DOOM or Inside alike, recognizes the hierarchical relevance of gameplay over story. That narrative leanings on a game’s delivery are just that. Above all else, they must not lose focus, treated instead as accompaniment rather than absolute necessity. Seraph may very well take us through the tale of a holy being (and its human vessel) attempting to return to its righteous home — and slaying a few demonic foes that have caused quite a stir, to say the least, not to mention getting to the bottom of why it’d been imprisoned on human soil to begin with — but the great thing is that even at its most narrative-heavy, Seraph not for one second loses momentum in making every second within every procedurally-generated environment feel utterly compelling. 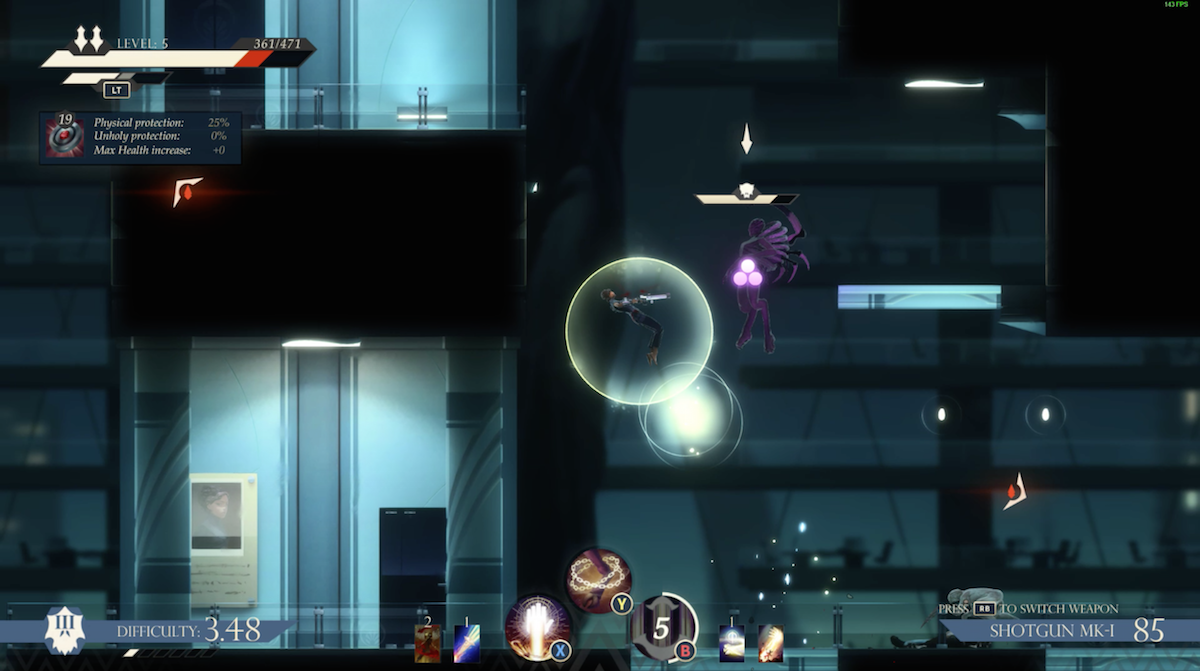 In a genre and/or niche of games where swords, blades and usually sharp objects are the given catalyst for adrenaline, guns are often disassociated with anything that revolves around agile movement and quick decision-making. While Seraph’s campaign plays out in much the same fashion as those typical floor-by-floor action-shooters with RPG-lite mechanics sprinkled amidst, it does the gameplay — as much the very implementation of its generated World — little justice when considering all else that takes place. When you dig a little deeper and realise one of twin-stick shooting’s most common factors, the ability to aim, is taken out altogether, it’s here that the initially-bizarre but eventual beauty of the game’s structure truly begins to resonate. Very little (if any) of Dreadbit’s decision-making feels misplaced or miscalculated; from the very first tutorial jump to final close-range finisher-move, Seraph‘s combat — come core gameplay — delivers some of the most robust mechanics to get to grips with at and ultimately satisfying to finally get right.

Because for all the objectives laid out to the player — tasked, with each new level they ascend, to hunt down a slew of demons in order to unlock the next door to progress — Seraph can be best summed up as a title that nails everything in both its gameplay and its design, down to the most atomic of visual effects and crunching sound design. With each area being procedurally-generated, the allotment of platforms, vertical shafts and open spaces will vary, but for the most part, Seraph offers more than enough spatial presence to perform, let alone engage, with the hordes on show — your titular character’s acrobatic movement and pulsating speed a thing to behold. Enemies meanwhile, regardless of their offensive or even defensive capabilities, will often come in two types: regular ones with a single health-bar and what many would perhaps class as “sub-boss” variants. The latter types — with health-bars separated into parts, requiring a close-range finishing move to fully deplete (not unlike the sectioned-off health-bars found in Furi) — require a bit more of a tactical if more trigger-happy focus than others and it’s times like this that Seraph’s personal abilities come in handy.

Despite the ordered chaos that a procedurally-generated could potentially create, each section of Seraph‘s World feels carefully considered and designed to make not only its levels feel less like restrictive borders — and more like apparatus in some elegant gymnastic show — but such moments against tougher foes feel much more like a spectacle and crucial moment in the campaign. For all its generative nature, Seraph almost always presents its action like a carefully-orchestrated set-piece — removing itself from the potential formulaic lull and instead carving out something that, even after the hundredth engagement, never gets old. Whether it’s quickly phasing to and fro between platforms, evading enemy fire down an open shaft (of which enemies will gladly follow you down) or maintaining passive-aggression in a spacious part with half a dozen foes surrounding you at all points, the game never takes its foot off the accelerator. Best of all, when the game feels like it’s cranked to eleven, it’s through genuine player engagement and skill with the game’s mechanics simply providing the tools for one’s use. 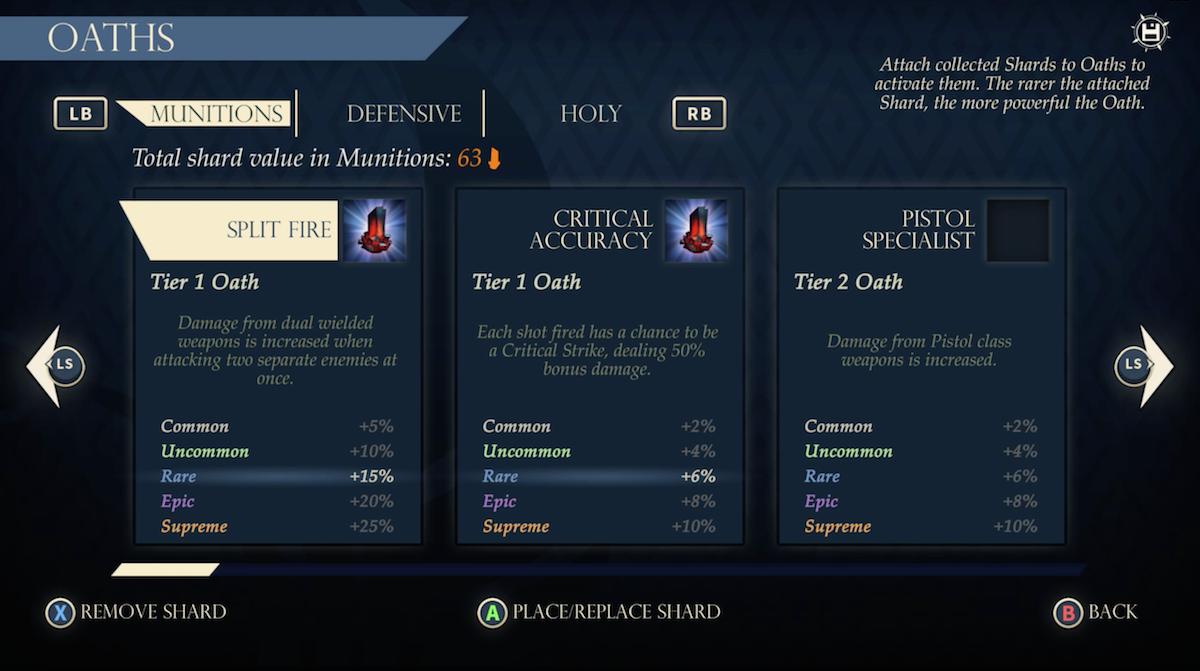 Of course some will eventually slip-up (perhaps early on, perhaps later on down the line), yet once again Seraph already comes knowledgeable on how to not just punish player misfortune, but treat it moreso with a considerable level of mercy. Should you fall mid-battle, the player is spawned either at the start of that floor or at a specified check-point if they’ve discovered it, only on a repeat run, health is reduced and what wearable perks (which come in the form of rings that add randomized buffs and resistances) one previously acquired are now removed. But this reduction lasts only until the end of the floor by which the former level of health is restored and the momentary added challenge is cleared. Much like its difficulty rating, which adjusts according to how good (or bad) you’ve performed thus far in that run, Seraph strides a perfect balance on dictating set rules but at the same time allowing players themselves to be the governor to their own success and the perpetrator of their own demise.

In-between levels are when players can tap into the game’s crafting system in order to better suit the increasing challenge — of which there is a surprising depth despite its simplistic user interface and initially off-putting, head-scratching array of constants, figures and percentages. But as noted, the systems in place and contextual arrangement quickly become clear and it’s not long before even the most stat-anxious and crafting-skeptics (like myself) become embroiled on whether or not to grant additional buffs — applied by collecting in-game shards which can then be fused to make more powerful buffs — to munition, defense, special abilities or none of the above. For a game that primarily revolves around shooting and feeling awesome in the process, Dreadbit do an amazing job at making the in-between decisions feel like they carry considerable weight. What’s more, the fact players are encouraged, as much rewarded, to invest in the crafting system — unlocking additional potential perks — breathes much-needed life into a tired gaming concept.

Yet for all its guidance and all its well-designed, well-structured branching-out experimentation with abilities, Seraph remains compellingly poker-face when it comes to its challenge and its necessity for player engagement. Whether that be the sparse but accessible offering of health pick-up’s (of which are randomly located throughout each level), the granting but randomly-assigned appearance of weapon drops or the increasing complexity and design of enemy attacks further down the line, Seraph is one of the few games I’ve played that marries aspects such as risk, exploration, crafting and survival not just within the realm of relevance once more, but within a whole package that feels profoundly unique and even more profoundly fluid in execution. Not once does the game charitably hold your hand, but at the same time neither does it feel unfairly difficult (regardless of how high you’ve clocked up the difficulty scaling). Each front-end and back-end mechanic plays out as a robust whole and the presentation, as much the end delivery, offers some of the best moment-for-moment gameplay you can find in any game currently existing, let alone available. 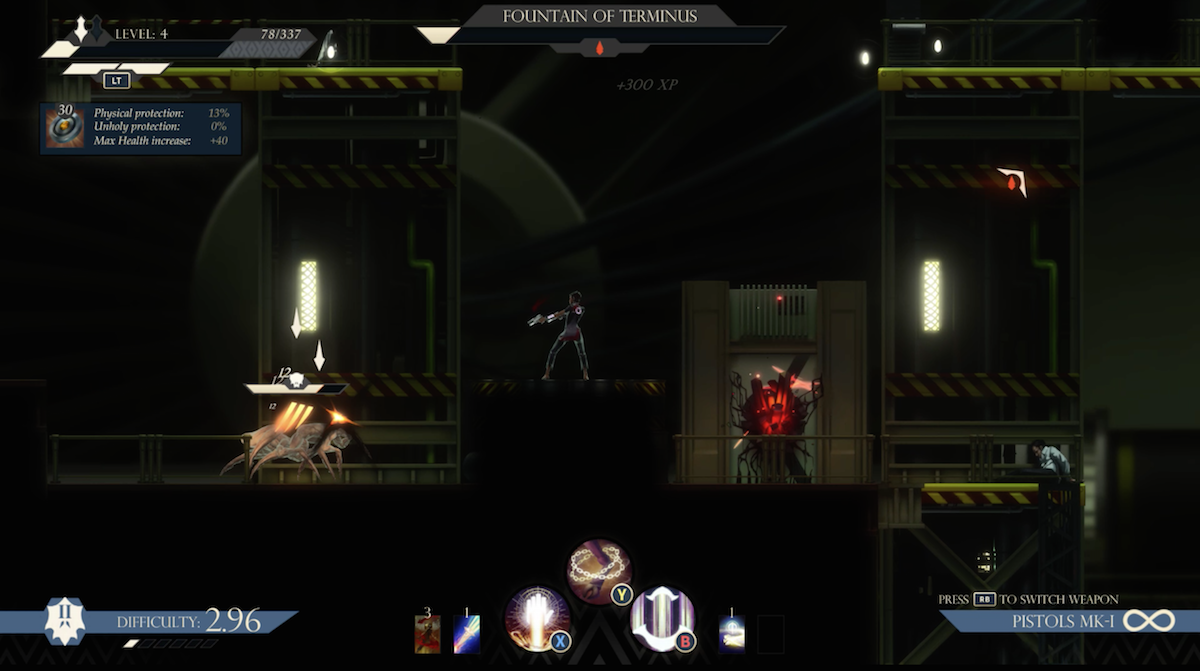 Rarely do I veer into the shackles of “hope” when an upcoming game lies close on the horizon, but from everything I had seen and played previously, Dreadbit had left me with one almighty good impression all those months ago. It’s here that I can honestly say Seraph is not just a great game, but a triumphant one built on fusing engaging gameplay with an elegantly-arranged world environment as well as an upgrade system that rewards both statistical investment and personal experimentation. A testament to the design philosophy that if an idea is good, it’s usually very good.