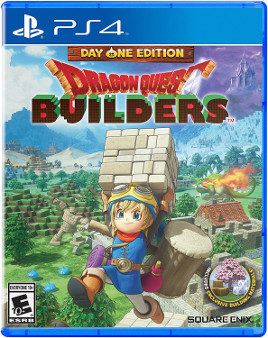 Somewhere in the basement of the Square Enix headquarters I imagine that there is a spinner with various popular game titles written on it and wherever the spinner lands is the title that gets to be crossbred with Dragon Quest.  2015 brought us Dragon Quest Heroes which was the unlikely mash up with Dynasty Warriors.  The combination worked surprisingly well, so this year the spinner was produced once again and landed on Minecraft, thus creating Dragon Quest Builders, which like the previous mash up is not a Minecraft clone set in the Dragon Quest universe but it is its own unique game that is a blend of the two styles.  Dragon Quest Builders does entail a lot of material collecting and construction, but still manages to feel like an actual Dragon Quest game.

Dragon Quest Heroes is an alternate sequel to the original Dragon Quest.  The Dragonlord offered Erdrick’s descendant half of the world in a proposition that would have the two rule side by side, which was accepted in a most unheroic action that defeated the purpose of the whole quest up to that point.  When the failed hero was out of the picture, the Dragonlord pretty much destroyed Alefgard, and with the destruction of all the cities and towns and plunging the world into darkness everyone forgot how to build anything.  That is until the Builder was awakened who is the legendary hero who has the power of creation and can reconstruct Alefgard to its former glory.

There is a tutorial at the beginning to help players who might be unfamiliar with the open world construction gaming genre, though the building controls end up becoming rather intuitive pretty quickly.  The game controls pretty much the same as one would expect from a 3D action game with the only significant deviation is the use of the directional pad to select weapons and building materials.  The building controls designed to make construction as smooth of a process as possible for even the most architecturally impaired player:  just select the building material and place it in the desired location.  Battles are pretty straight forward, hit the monsters with your weapon and try to avoid getting hit back.  There are no attack spells available, the Builder’s magic power is that of construction, not fireballs, but medicinal herbs exist to recover from damage and there is at least one item that can be built that functions as a special attack.  In addition to keeping an eye on one’s hit points, the player will need to eat to keep the hunger meter appeased. 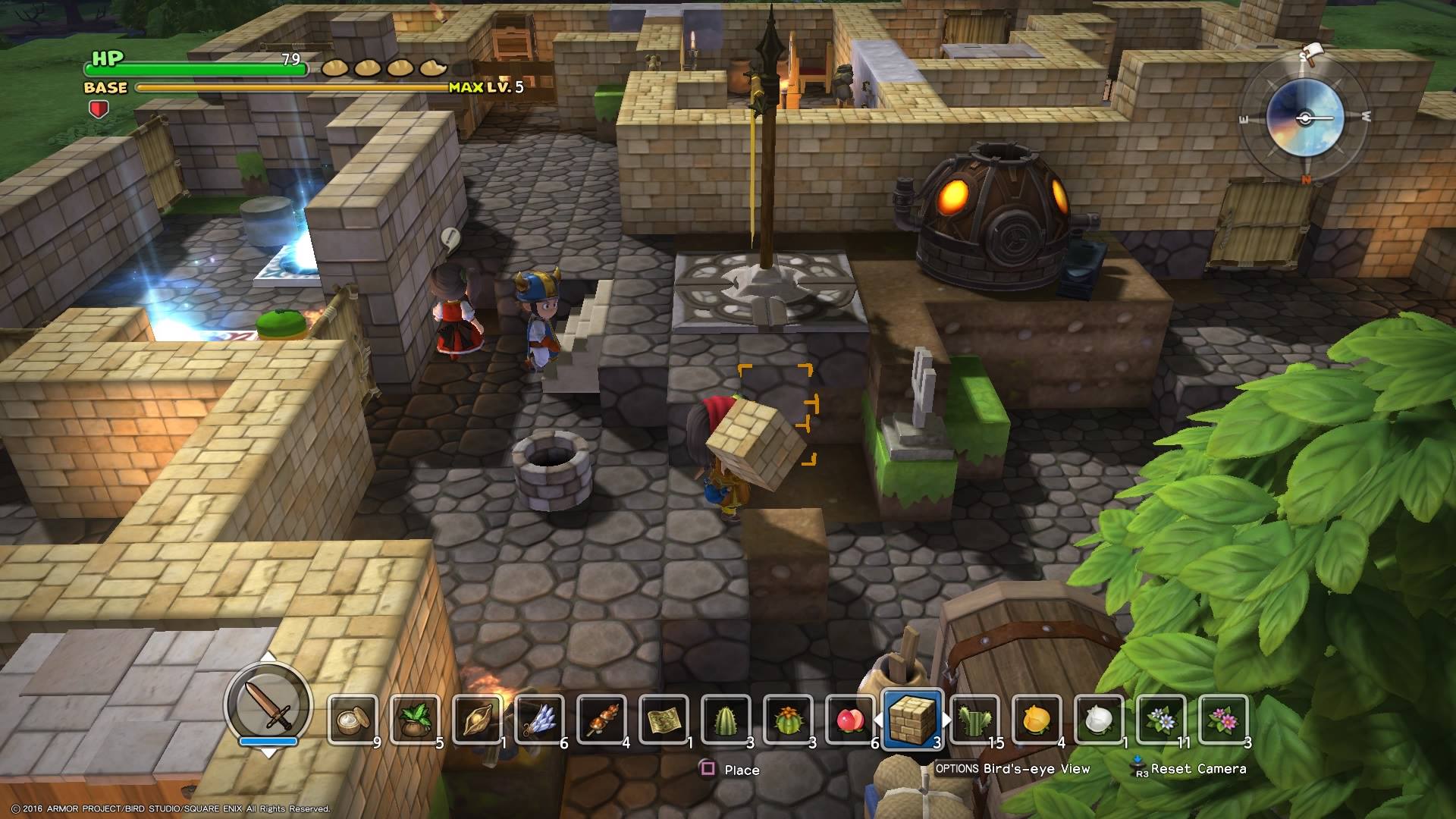 Like a traditional Dragon Quest game, there is a story that advances through the completion of quests that are primarily given by the NPCs residing in the town that the player is constructing.  These can range from building a personal bedroom for someone to venturing off into the world to find some new food recipes to killing some very powerful monster in a far away land.  Most of these quests involve extensive traveling that will pit the player against classic Dragon Quest monsters.  Traveling to new areas will unlock new materials that can be used both in construction of buildings in town as well as creating more powerful weapons and armor.  Unlike traditional Dragon Quest games, the character does not gain experience points for killing monsters but the town will gain levels based on construction progress, meaning the monsters just get killed for materials, protection, and fun.  The player can increase hit points through Seeds of Life that are generally given as quest completion awards with attack and defense power being determined by weapons and armor.  All equipment is made by the player with better options becoming available when quest conditions are met, such as learning how to build a forge or getting the means to mine stronger metals.

Exploration has always been a major part of any Dragon Quest game and this is no exception.  Dragon Quest Builders is divided into chapters with each chapter taking place in a different region of Alefgard.  These regions are not physically connected to one another but the players can return to previous areas whenever they would like to from the main menu, allowing the player to tend to any unfinished business they might have there.  There are numerous hidden items and side quests in each vast area, and for people who enjoy exploration and hunting for secrets there is no shortage in that department.  There is a free mode that is unlocked after completing the first chapter called Terra Incognita.  This mode allows the player to build whatever they want and while there is no multiplayer, this mode will allow players to share their creations with other players.  There are a number of optional challenges in each chapter, and completing these challenges will unlock the ability to build certain items in Terra Incognita.  There is also a portal in this mode that caters to those who want to put the Warrior back in Dragon Quest, which takes the player to Terra Gladiatoria where they are free to battle to their heart’s content. 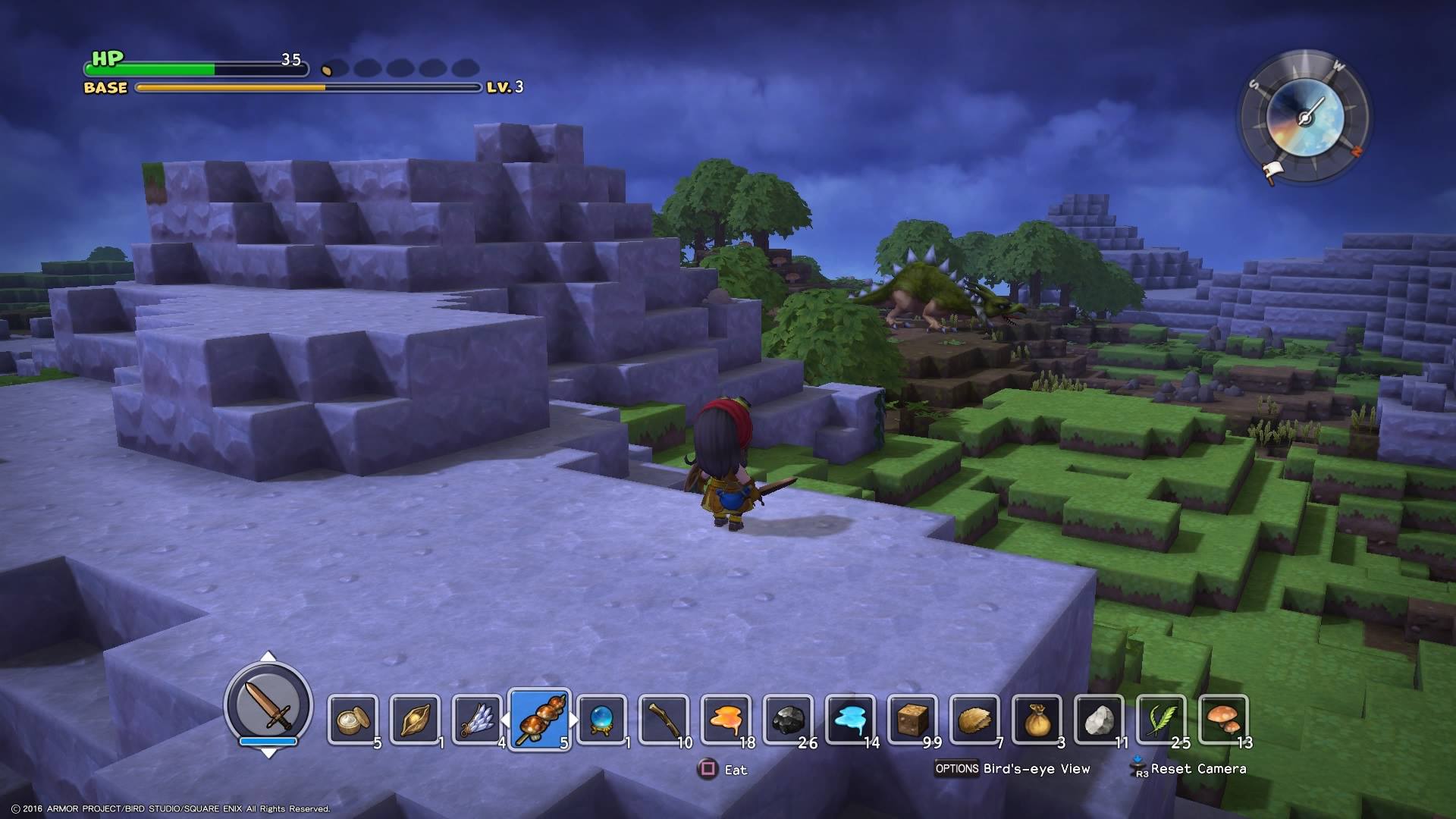 One of the more surprising aspects of Dragon Quest Builders is how much it feels like a traditional Dragon Quest game.  The construction aspect combined with the blocky and destructible environments will naturally attract comparisons to Minecraft and these comparisons are valid.  Unlike Minecraft progression through this title is story driven, and the way the story unfolds is done in a way that feels how the original Dragon Quest would if it were released today.  There is some direction, such as travel to some location here to retrieve this item, but there is no GPS function and the bird’s eye view map has a limited range.  Main quest destinations are shown on the minimap and compass, but some of the side quests the player really needs to be on the look out if they want to complete them.  Each chapter will take a few hours to complete the main objective and even more if the player wants to complete everything, but with so many small objectives it feels like progress is constantly being made.  There can be some frustration in exploring these huge worlds because where one is supposed to go to complete is not always completely clear, but the fun of exploration and finding everything hidden in the world greatly outweighs the occasional moment of frustration.

The problem with restoring civilization to a world the Dragonlord destroyed is when progress is made in the city, monsters occasionally attack it.  Fortunately for the player, unlike traditional Dragon Quest games the townspeople actually take on an active role in fighting off the attackers.  Sometimes these are just random monsters wandering into the base but other times they are more dramatic scheduled battles.  Each chapter has a boss battle, and this is an area where combat gets creative.  Without giving anything away, charging at the boss swinging wildly is a guaranteed way to lose.  Each boss requires their own strategy that will be somehow related to the construction process for that particular stage.  The townspeople assist the player in ways beyond battle, if the player constructs workshops or kitchens the players will create food and other items for the player to pick up later. 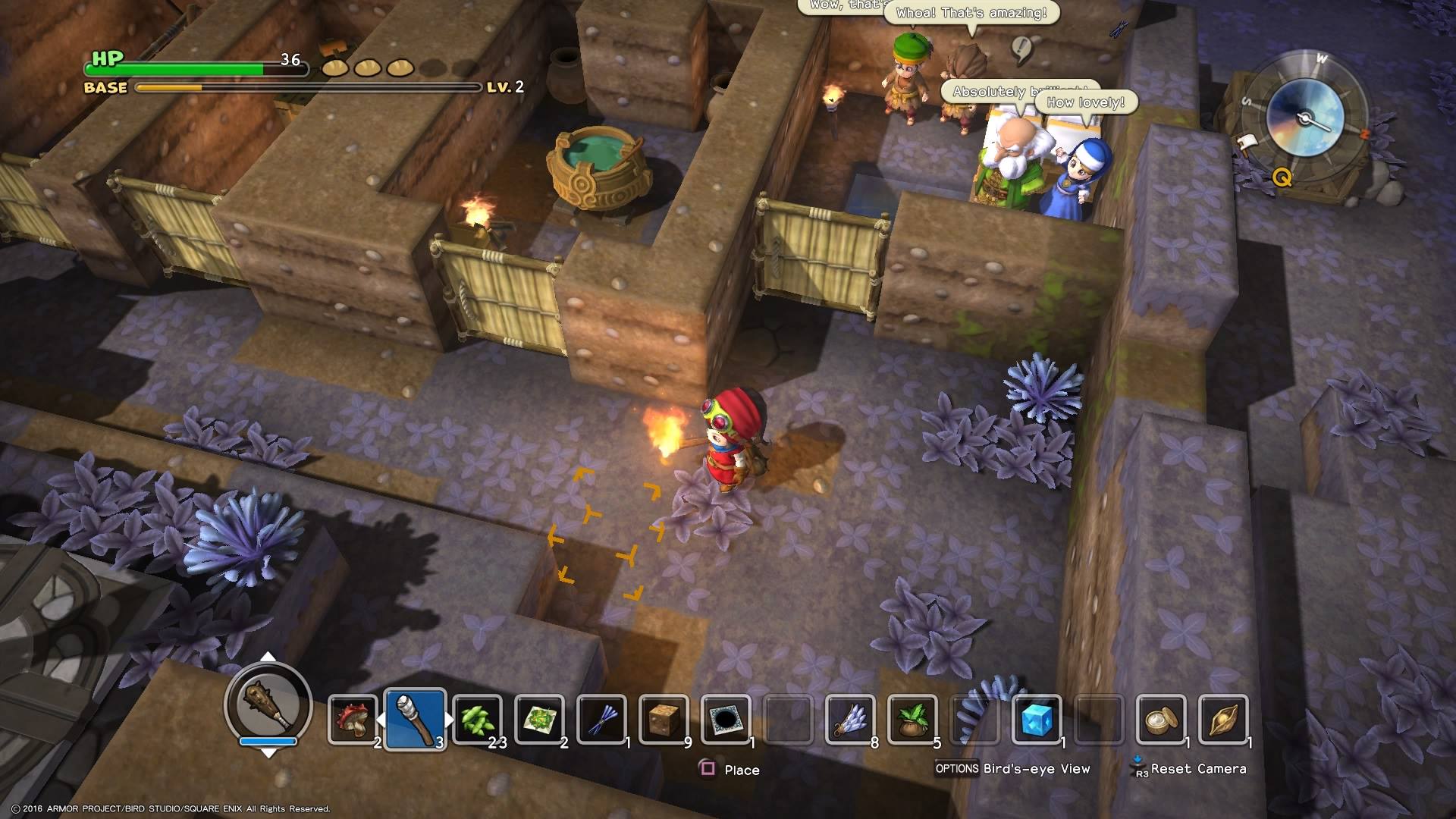 A great thing about Dragon Quest Builders is that it is self aware that it combines two very different game types but the player has the freedom to emphasize one aspect over the other.  If the player wants to treat the game as an action RPG and spend the bulk of time exploring the world and killing monsters, the required building time can be minimal.  Additionally, the player is given blueprints for certain types of buildings which can speed up the process even more.  If the player bought this game because they want to construct Alefgard in a way that fits their own vision, that option is there as well.  There are plenty of images and videos of the Japanese release showcasing some amazing construction and creativity.  If someone wants to devote months to building their perfect kingdom, the means exist within this title.  The player is free to create whatever they want and they can spend as much or as little time on the creative aspect as they please.  Additionally, fans of Dragon Quest will recognize the monsters and classic Dragon Quest music, which has been redone in a way that sounds similar to the Symphonic Suite renditions.

There is a subsection of gamers who might have played games like The Sims once upon and thought of every way imaginable to torment, imprison, and indirectly kill their digital family.  I know these people exist, for I was one of them.  Dragon Quest Builders will not let you kill your NPCs or even damage them by directly attacking them, but where there is a will there is a way.  They can be knocked unconscious by traps, or knocked unconscious by attacking monsters.  A good hero will use a medicinal herb to make them revive more quickly, a lazy hero will leave them where they fall, knowing they will awake on their own at some point.  Then there are the rest of us.  Much to my dismay, bonfires do not seem to faze the movement of the NPCs at all.  I tried surrounding someone with bonfires hoping they would be trapped, and they walked over it like nothing.  In a bedroom where some NPCs slept I covered the floor in fire.  Again, they were not fazed.  They are good at climbing over structures, but if you build high enough walls around sleeping NPCs they can be trapped.  Unconscious bodies can be dragged off to desolate locations, plus burying them alive is an option.  The freedom to be a malevolent bastard to the NPCs is more limited than some other sandbox games, but for the sadistic player there are some options. 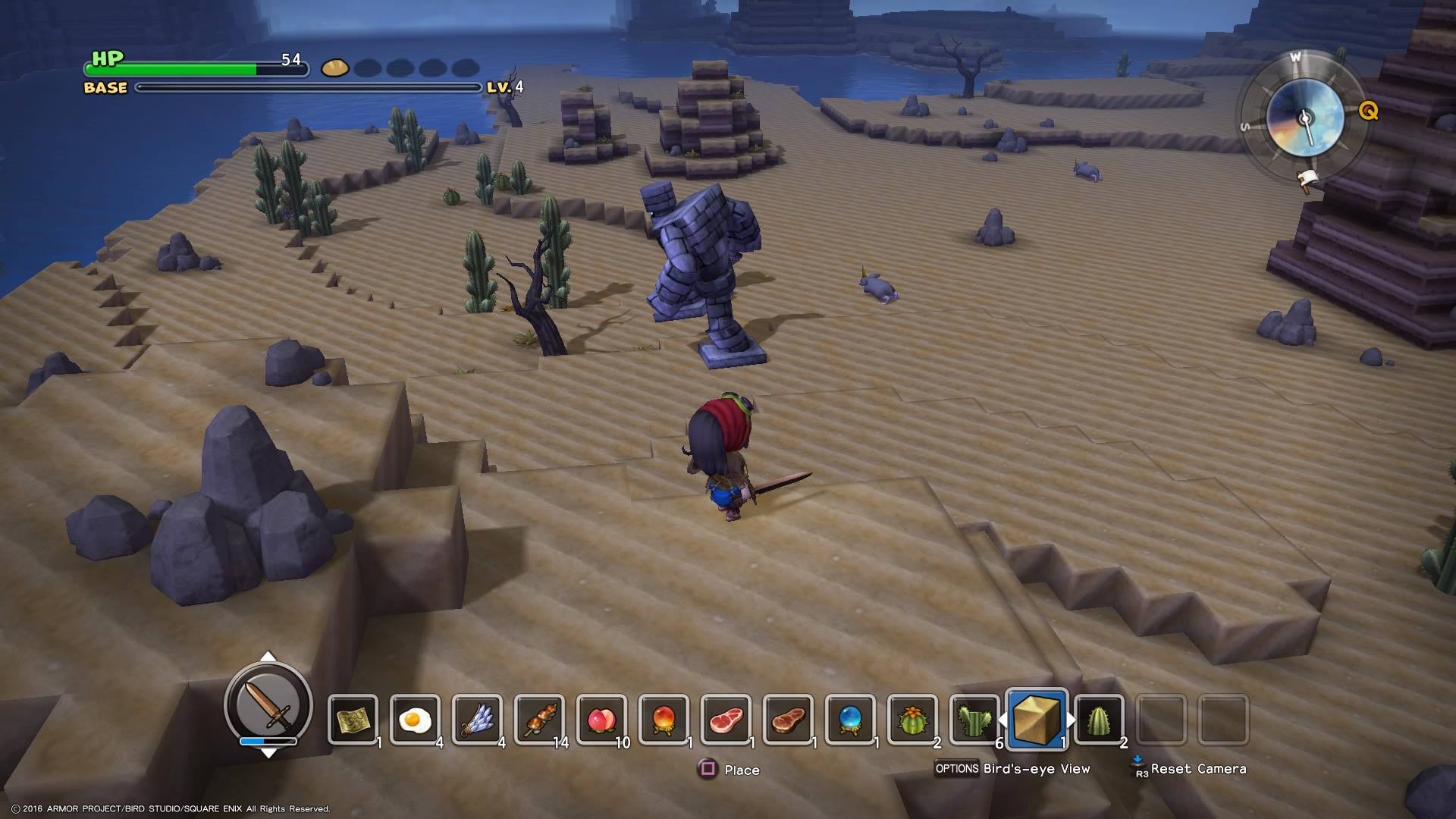 Dragon Quest Builders is a game that I was a bit uncertain of prior to playing.  To put my enjoyment in perspective, I am a huge Dragon Quest fan, and while I appreciate what Minecraft is and what it does, it never held my interest for long as a game. I couldn’t stop playing Dragon Quest Builders and it is one of those experiences that I look forward to continue playing even after the review is done.  Constructing the town is both easy and enjoyable and the sky is the limit for people who are into creating things.  If you just care about advancing the story, the town can be built up quickly to advance to the next objective, but if you want to spend the majority of the time creating a massive city, the freedom and means are available to do so.  Combining an action RPG with a building game is an unusual combination, but great care was done to ensure that fans of both can be satisfied by this and the freedom to play the game in a way most compatible to the individual player’s preference only makes it better.