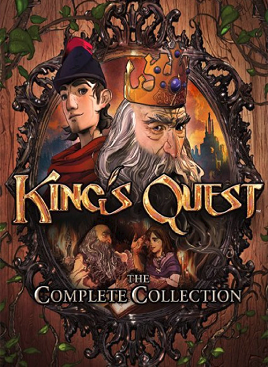 After rescuing his princess and beginning a new life with his love, King Graham soon finds himself embarking on a new adventure: figuring out how to get his new twin babies to shut the hell up. Changing diapers, heating bottles to just the right temperature and walking the boogers until they fall asleep is the epic puzzle that opens up the latest chapter in The Odd Gentlemen’s King’s Quest reboot, Snow Place Like Home. It must be said that starting off with a never-ending cacophony of screaming babies does a great job at setting the tone for the rest of this chapter.

After the introductory puzzle, the castle experiences interdiction and the male twin, Alexander, is kidnapped by a wizard whose name will not be revealed here due to spoilers. Flash forward eighteen years and the son returns having escaped the clutches of the villain. A relieved Graham, who hasn’t rested since the child was lost, quickly accepts his son into the fold. To aid the acclimation process, Graham and Valanice decide to take a family vacation to the tower where they first met. Upon arriving at the hotel near the destination, though, things aren’t quite how they remember. There’s quite a bit more ice than there was before. And was that labyrinth always there? Soon, the fairer half of the family has disappeared and Graham and son are informed by a sphinx that they must clear the labyrinth to be reunited with them. Thinking that this is part of a theme vacation, Graham takes up the challenge, Alexander in tow.

While this is a fine set up for a game, part of the appeal of the previous chapters in the King’s Quest series has been in the story and dialogue. The Princess Bride inspired humor of the A Knight to Remember, the dire decisions made in Rubble Without a Cause, and the sweet comedic romance of Once Upon A Climb were chalk full of memorable moments outside of the overall plot. These moments are necessary, as they reinforce the themes of the plot and elevate the experience beyond “this happened, then this happened.” The same cannot be said about Snow Place Like Home. With the exception of the story’s climax, which was excellent, this chapter is basically a series of puzzle rooms punctuated by bickering between Graham and Alexander. 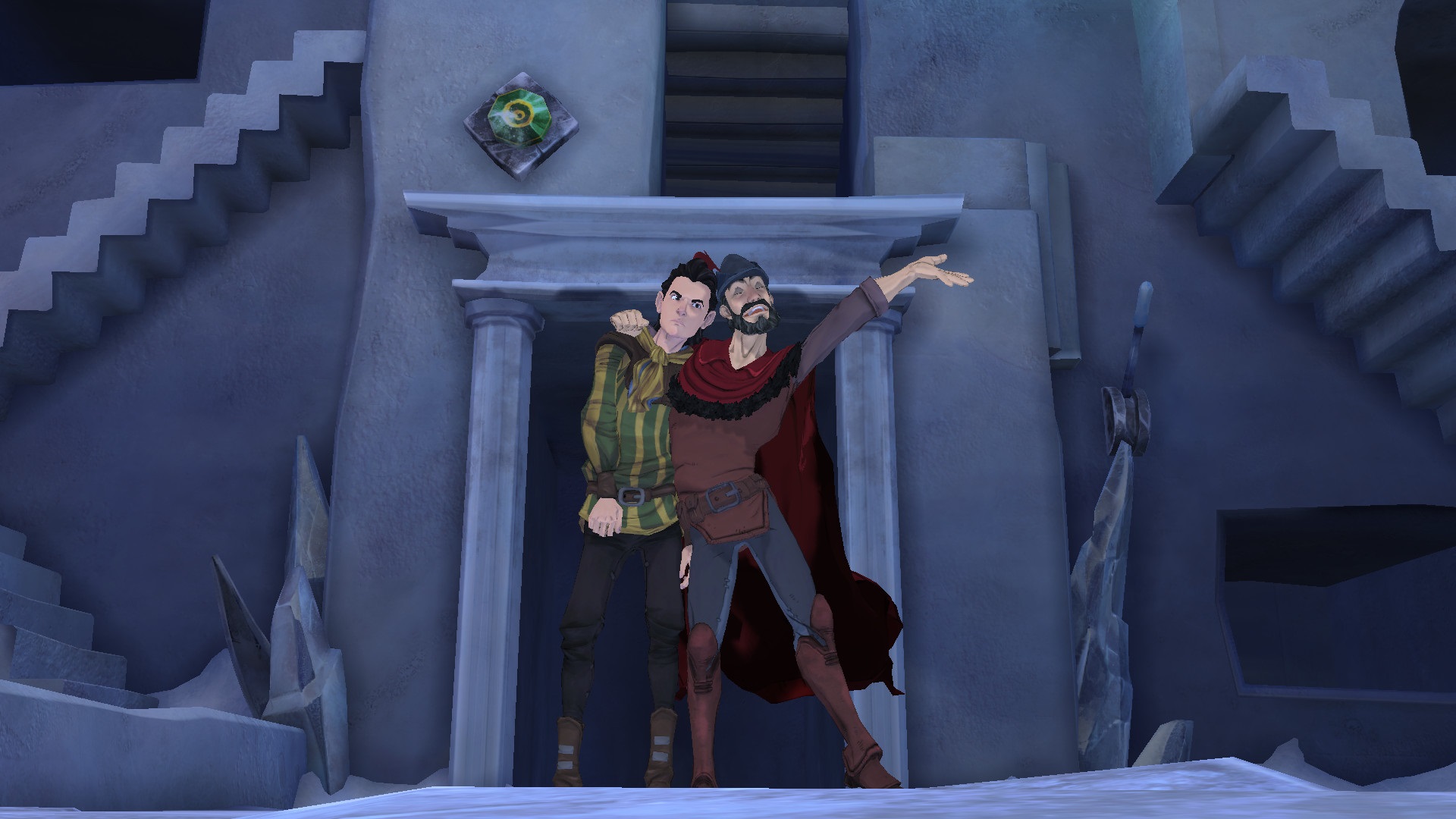 This bickering is supposed to be the primary linchpin of the conflict in this story. Alexander was raised by someone else and doesn’t have the same outlook and values as his father. This leads to Graham being resentful of his son “taking the easy way” while Alexander is baffled and frustrated by his father’s unwillingness to use an available tool. This is all supposed to lead into a theme of familial acceptance.

The problem is that the arguments that eat up so much of the time aren’t exactly compelling. The actors that play Graham and Alexander don’t seem to mesh well to create a believable argument. (This is assuming that they even read together.) The fighting falls flat and the player is left seeing both as behaving like a bucket of anuses. (Anusi?) Folks who find themselves wishing that the two would just shut up can rest assured that they are not alone. 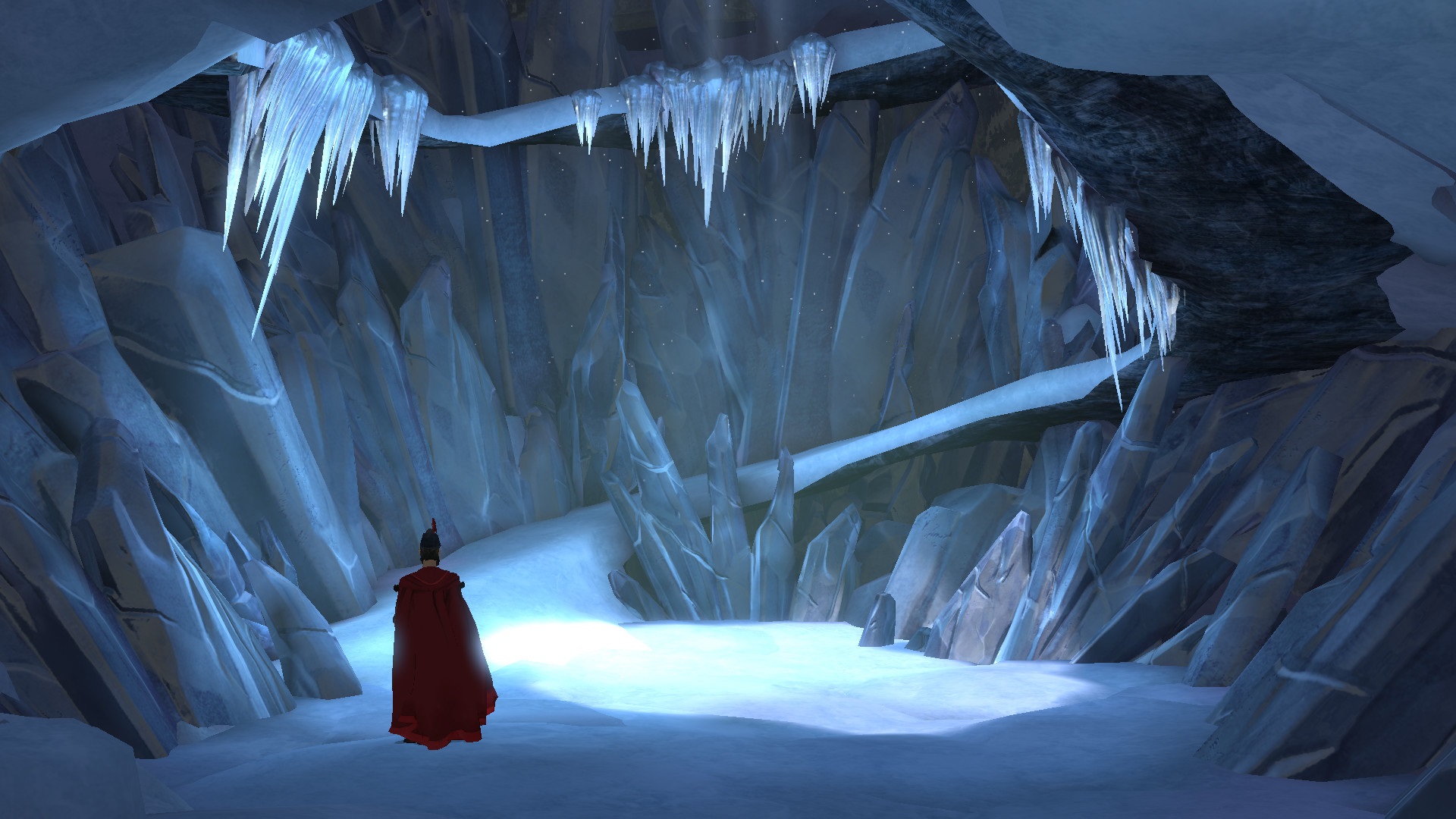 As far as the puzzles themselves, fans of pushing blocks and sliding tiles are going to be in heaven. These two styles make up the vast, vast majority of the actual gameplay found here. (Vast!) It makes sense that the labyrinth would be a series of rooms and conundrums. It’s certainly a more interesting concept for a video game than a giant maze. However, tile, block, and switch puzzles, while they can still be challenging, aren’t exactly original nor compelling. In fact, I personally loath them in heavy doses. Once in a while is fine. An entire game of the overplayed trope is disappointing after seeing the creativity that has gone into previous chapters.

There are a couple of highlights, though. A spatial reasoning puzzle near the end was actually pretty cool, and the room where the player solves the sphinx’s riddles by picking up an item or two that answers the query and placing it on an alter was something I would have liked to see more. 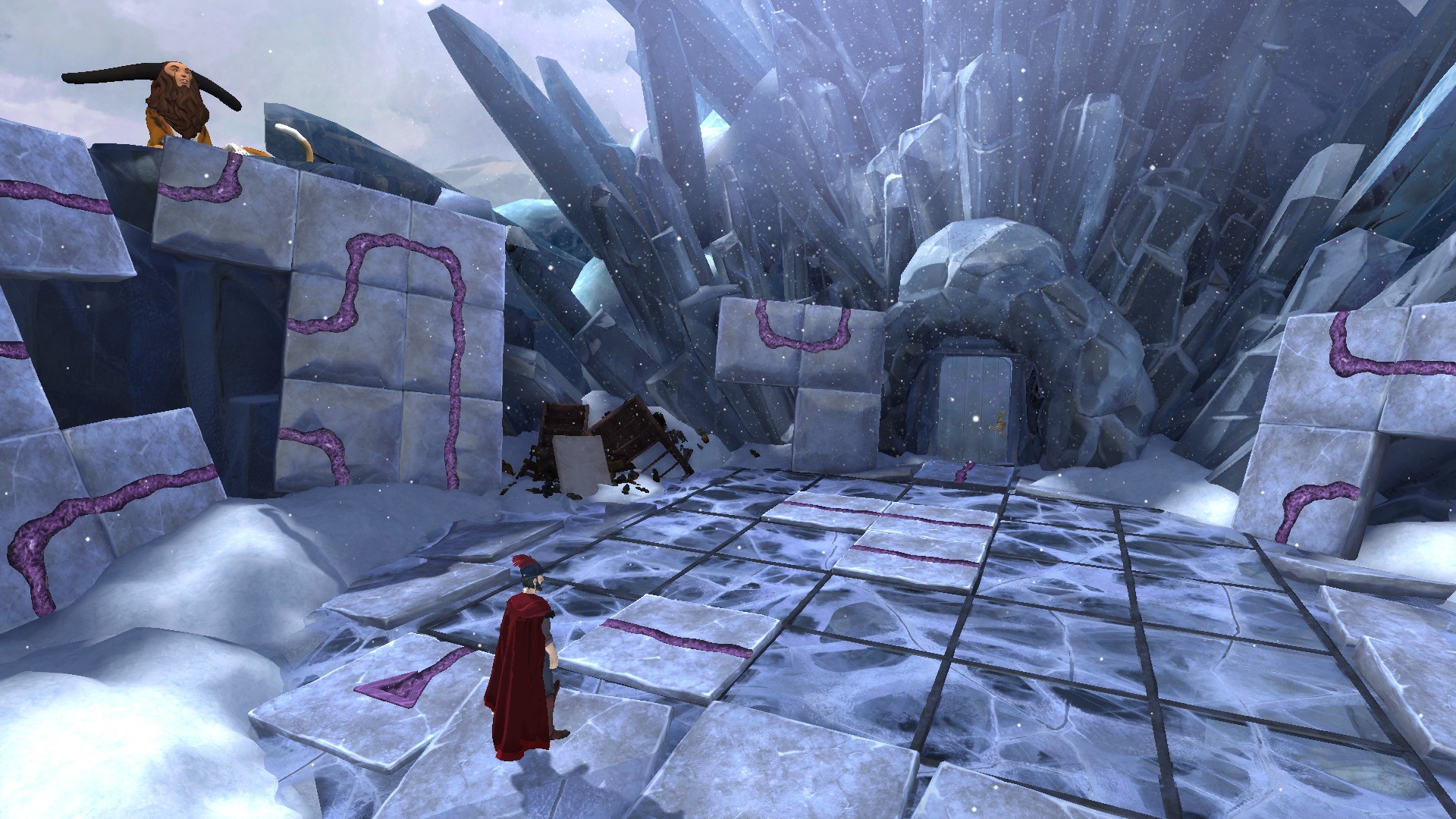 Being a player invested in the story and humor of this episodic King’s Quest, I’m glad that I played through Snow Place Like Home. While light on interesting plot until the end, the climax is rather intense (secrets revealed! Drama! Pathos!). It truly sets up a final chapter that I am eagerly anticipating, but it does take some work to get there. The themes that the title explores gets hamstrung by the player’s desire to force both characters to eat a bowl of fish guts. The puzzle design misses the cleverness that made the previous chapters so much fun, rendering the penultimate chapter an extreme disappointment as a game, doubly so as the previous chapter was the best in the series. It appears that the pattern is that the odd numbered chapters are superior to the even ones. That’s fine; it just means that Chapter 5 is something worth anticipating.