Recently I got a chance to play Dungeon League, a new multiplayer game from Surprise Attack Games and developer Achebit, along with three other players. It’s a unique setup in that it’s a hybrid of multiplayer combat games, MOBAs and the like and procedurally generated dungeon crawlers, with each new arena being completely different in certain ways. As various characters are sent into these murky depths as part of a sport to appease the Dungeon Masters, you control them in a top-down, 16-bit slugfest, where up to four folks of fantasy fight each other in deathmatches, capture the flag, point capture and more.

The initial experience with Dungeon League was a blast. Gameplay, is swift, fast, and fun, with quick rounds that still manage to jam a lot of highly enjoyable chaos into them. The standard MOBA-style setup of combat with various special attacks and cooldown timers translates incredibly well into an old-school action game, and the graphics were nice and detailed, with a particularly great use of lighting. There’s a cute sense of humor to it all as well (such as some of the items you can purchase to boost stats in between rounds), and it goes without saying that the whole experience makes for an absolute hoot as a party game. I couldn’t wait for this game to be completed! And I didn’t have to wait long for a least some of it, because it turns out that it’s already available in Early Access on Steam (and has been for a year now, which I somehow missed). And having received a code for it, I installed it, flipped it on, and dove right back in! 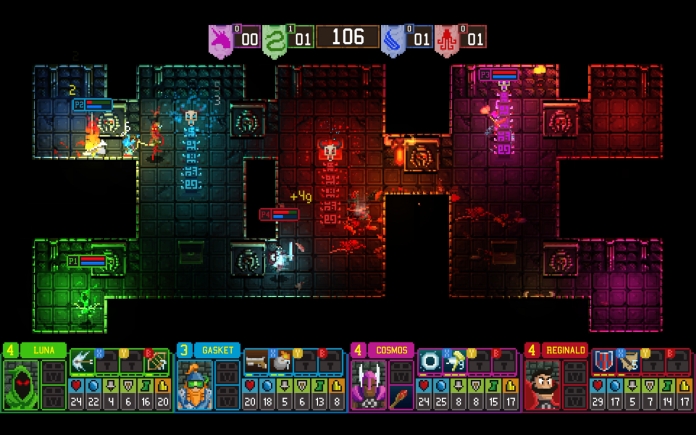 I started, selected the main Tournament mode…and discovered that it was local multiplayer only right now.

Okay, a message to all indie developers out there: I completely appreciate the recent approach to bringing back couch-based local multiplayer games, recreating the glory days of games like Mario Party or GoldenEye 007. I welcome it, even, because resurrecting these types of game provides ample opportunities to experiment with different kinds of games and provides ways for more players and their friends to get together and socialize. But the thing is that the best party games and multiplayer games also put a heavy amount of work into their single-player modes and/or online multiplayer as well, making sure all gamers can experience what they have to offer. Other games in the same boat such as Overcooked and Conga Master have ran into this issue before, while in contrast, games like Move or Die have been able to do local and online to much acclaim.

That said, Dungeon League is aiming to hopefully include online multiplayer in the final product, which earns it some points back. but for now, while I can definitely recommend the game if you have some friends to play with, solo players get the shaft. There is a Gauntlet mode that allows for single-player play, as well as up to four players overall, as you traverse a set of darkened dungeons in what feels more like a traditional roguelike adventure. Unfortunately, enemies attack you en masse almost immediately, and it really feels like another case where nothing was altered for the lonesome, and thus you still need some friends to make it work. Even the introduction to that mode mocks you for not choosing the main multiplayer draw, and there’s even at least one case of an error, when the character select screen says “Press A to Join” when its the X button that actually does it. It sadly suggests where all of the priorities truly lie.

Still, I cannot stress enough how if you have the friends for it, you should absolutely give Dungeon League a try. Between its various cute and chuckle-worthy uses of fantasy tropes, variety of nifty character designs, various means of equipment and skills to try out and a near-infinite amount of dungeons to play in, it really does have a ton to offer for those who love a quality brawl. But it could also be much more, so here’s hoping some online multiplayer, a more refined single-player option, or heck, even some AI bots are added in order to make this one of the best party games it can be. It may do its greatest work when a couch is involved, but the standard chairs could use some love as well.