I am the type of gamer who does not question or really care much about hardware one way or another. All that matters to me is whether or not any certain setup can run a game, and run it at least well enough to play. I could not care any less about tech that makes graphics ten percent prettier, as long as the game still looks good. If you are the type of person who cares about hardware and having the best possible performance, then fine, if you’re passionate about it (in the non-annoying way), that’s great. I’m just saying up front that I myself am not a person obsessed with hardware when it comes to video games.

I’d also be lying if I didn’t say that there aren’t aspects of the hardware world that don’t at least intrigue me a bit. In particular, there’s the area of customization, as seen with previous pieces of tech like the Xbox Elite controller. Somehow, the idea of being able to tinker around with your controllers, keyboard, headsets or what have you to simplify things appeals to me. I suppose in that sense, you could say any hardware-related interests I have tend to lean more towards the devices that are used for playing games rather than powering games. And recently, I got a chance to take a peek at two different devices that piqued the interest of even a non-hardware junkie like me. 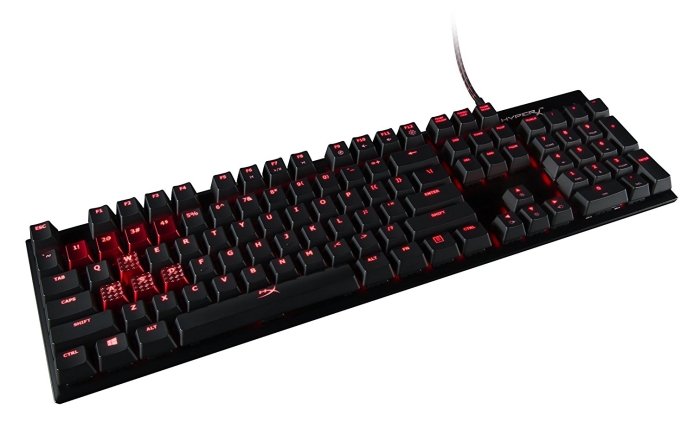 The first one was the HyperX Alloy FPS Mechanical Gaming Keyboard, which I understand has already been making waves after its release in select countries. While it’s pretty obvious that LED lighting and customizable keyboards aren’t exactly new revolutions, the red backlit keys on the model did stand out quite a bit, and the ability to adjust the lighting on them was pretty neat, even choosing which ones do get lit up to help highlight any keys needed for important commands. The keys are also replaceable, and even allow for ones with custom designs, like a couple with symbols on them I was shown. But as the name of the product suggests, this keyboard is meant for FPS players, and as such, also comes with textured keys for movement and weapon selection, all in what is meant to be a more compact package as well. This is the HyperX brand’s first foray into keyboards, but it looks like it may be some quality work indeed.

The other piece of hardware I got to see was Antlion Audio’s ModMic, which appears to be must for any streamers or those who want high-quality chat when gaming online. Basically, it’s a portable studio-quality boom microphone that you can attach to any proper set of headphones, simple as that. While it isn’t as simple as just slapping it on any headphones you have, it definitely is a nifty idea, the design is neat, and it allows for a good amount of flexibility, especially when you can just easily switch it to any new set of headphone you may prefer for certain cases. And as someone who has an interest in dabbling in streaming and could use something a bit more high-quality, I am definitely interested in the ModMic, and was given a chance to check out the latest model, the ModMic 4.0…unfortunately, my only headset at the moment as a promotional Saints Row: The Third headset that auto-tunes your voice and that I’m pretty sure only works on cell phones, so we’ll have to wait a bit for any more detailed thoughts I have on it.

So looking back on what I’ve written about HyperX and Antlion’s offerings, I have come to the realization that I may really sound like a numbskull talking about these devices compared to those who are more tech-savvy. In the end, I’m just the type of person who’s simply interested in whatever hardware seems neat and fun, and both the HyperX keyboard and ModMic fit that bill perfectly. That might not make me the best tech expert, but hopefully those that are appreciate tools like these just as much, if not more.