There are millions of Xbox One owners around the world who bought their console and stuck with its current hard drive limitations. Whether it’s 500GB or 1TB, one aspect of this generation that seems to be lacking is storage, especially if you’re someone who buys multiple games a year. When you look at Gears of War 4, which needs 55GB of room, or Halo 5: Guardians which takes up almost 100GB, those stock hard drives will fill up fast. Fortunately, unlike a certain competitor, Microsoft allows games to be installed and played on an external hard drive, which becomes incredibly handy for those always on the go, along with anyone who doesn’t want to open up their system.

Last year, Seagate released an Xbox One Game Drive to better accommodate gamers with 2TB of space, priced at a reasonable $99. We’ve come a long way from paying $50 for 8MB memory cards on PlayStation 2, and the outrageous $180 120GB hard drives for Xbox 360 almost a decade ago. To celebrate the launch of Gears of War 4, Seagate has released a revised version of their Game Drive that’s priced at $99.99 and exclusive at Gamestop. 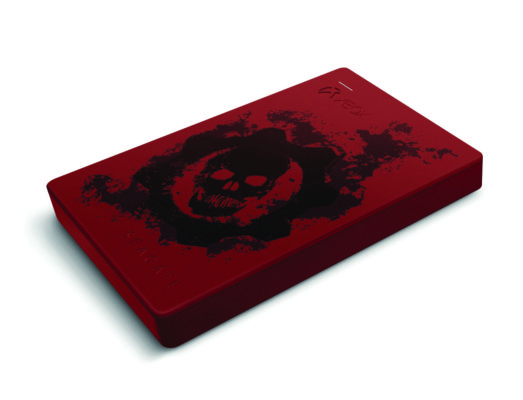 Being branded after Gears of War 4, which conveniently comes out today, it has the Gears of War logo plastered on the front of the cover, and instead of the iconic green we saw last year, the external drive is painted crimson red. The drive itself is roughly the size of the standard Xbox Game Drive, a few cm larger than the Backup Plus Slim and slightly smaller than the company’s Expansion line. Material-wise, the HDD comes in a light plastic casing with a combined weight of 130g, which is lighter than something like the Backup Plus Slim which weighs in at 158g. It may not have the sturdiness of the Backup Plus Slim, but the 28 grams are felt in force.

The drive features a 3.0 USB connector for the most optimal speeds, which comes with roughly an eighteen inch (45cm) cable, and has a light indicator in the top left corner for when it’s in use. It even comes with a Gear Pack (Operation Pack) for the multiplayer and cooperative modes of Gears of War 4, which is valued at $2.49, or 1000 in-game Credits. It’s definitely a nice bonus for those looking to get a head start in the shooter.

The 2TB drive can store around 50 retail games, provided the average install size is 36GB, but just how fast is the drive? Most users will be moving data to the external drive, and our tests revealed that benchmarking Gears of War 4 and Halo 5, it averages around 65 MBps. At the high end of the spectrum it hit 74 MBps, whereas it went as low as 54 MBps in rare occurrences. Both transfers seemed to drop around halfway, but quickly recovered. By comparison, the stock hard drive transferred at, on average, 25 MBps, so that’s a sizable upgrade in speed. 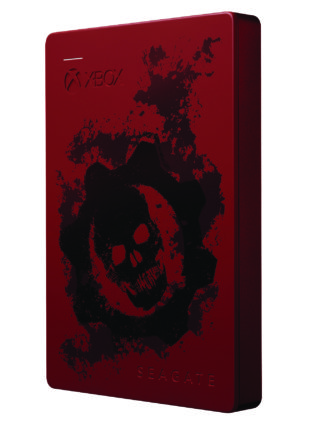 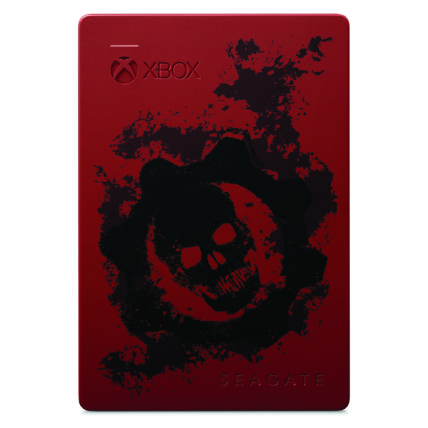 Now for what everyone is waiting for: just how much does this drive affect the load times in games? The results are overly positive, with most games being improved thanks to the drive’s increased read and write speeds. We tested it out on six Xbox One Games and one Xbox 360 game thanks to the backwards compatible emulation on the system. Everything is valued in seconds:

Gears of War 4 is a strange entity. While almost every game below seems to benefit from the Seagate Game Drive, Gears of War 4 varies in performance. The boot time in general decreases, but we sampled various load times when going into specific missions, and both the stock and Seagate drives seemed to perform at the same frequency. It seems ironic considering this drive is branded with Gears of War 4.

While Gears of War 4 doesn’t seem to benefit all that much, Halo 5: Guardians is an entirely different story. The overall load times decrease by about 30% all around, saving quite a bit of time, especially if you don’t leave the game running in the Instant-On mode. While the load times aren’t too bad to begin with, the extra couple of seconds are a bonus.

Here’s one of the biggest differences. While the boot time doesn’t seem to be that big of a difference, loading into the actual game is significantly better. We also ran into a couple of instances (which haven’t been applied to the values) where the stock drive took upwards of ten seconds before the load began. If you take that in consideration, loading into the game could actually be over 50% better. Other than that, the fast travel feature seems to have been improved by a large amount, as well, which becomes far more useful later in the campaign.

Lara Croft’s adventure from 2015 is only marginally improved thanks to the Seagate drive. Loading into the actual game and fast travelling around the world are the biggest differences, saving around 8 seconds each, but the boot is roughly the same, only saving around two seconds. Being a seamless semi-open world game with no load times, there’s only a small benefit with having it loaded on the Game Drive.

While Rise of the Tomb Raider is marginally better, Sunset Overdrive is barely improved. The biggest difference between the two hard drives is the six seconds you save at boot, but everything else is between two and three seconds better. It’s not all that noticeable but still a slight decrease at looking at a load screen.

If you’re a fight fan, you’ll greatly benefit from the Seagate Game Drive with EA Sports UFC 2. Not only does the game boot over ten seconds faster, and get into the main menu 22% quicker, but loading into a fight is incredibly meaningful. While we didn’t test this out with the online portion, getting into a fight with a CPU opponent decreased by nearly 40% on Seagate’s drive. It’s especially great if you’re someone who likes to test out all of the fighters as switching between them can now be done at a much quicker rate.

Forget EA Access or the fantastic media functionality on Xbox One, it’s the backwards compatibility program that shines the brightest. OK, that’s debatable as some of the games on the service haven’t made the transition all that well, but the many that have ensure Xbox 360 users aren’t left in the dust. Regardless, we tested out one of our favorite games of the last generation to see if backwards compatible games are affected on the Seagate Game Drive. The results aren’t all that reassuring. While the boot time shaved off a couple of seconds, loading a save file and getting into a battle is less than a second difference from stock to Seagate. Granted, Lost Odyssey was originally released before the option to install games from a disc was available on Xbox 360, so that might factor into this. 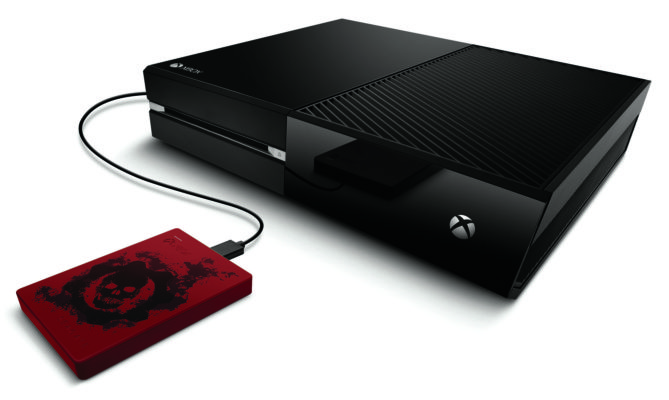 In the end, the boost in storage is fantastic, allowing for far more games to be played, but it’s the increased read and write speeds is an added bonus. They won’t completely eliminate load times, but they range between 0-40% quicker, which in some cases make a meaningful difference. Of the seven games tested, three benefited from the drive substantially, two of them received a decent boost, and the other two barely saw any improvement. Gears of War 4, ironically the game this is being marked towards, and backwards compatible games such as Lost Odyssey don’t seem to benefit from the increased speeds, but the other fives games we tested were aided by running on Seagate’s Game Drive. In the end, if you’re someone who’s striving for more storage and potentially faster load times, the Seagate Xbox Game Drive is a must buy. If you’re also a hardcore Gears of War fan, the Gears of War Edition is just an added bonus to show your support.