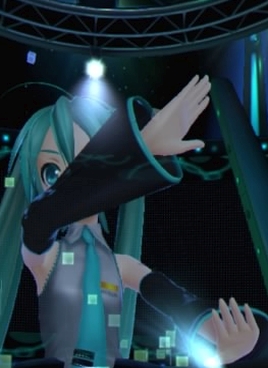 Hatsune Miku as a concept is strange and somewhat baffling to an outsider looking in. In a way, that’s fitting for a game on a VR platform. In another way, it’s strange to see an artificial singer treated like a real on-stage goddess with adoring fans. It could be an old school vs. new school thing, as in theory, it’s no different than folks losing their minds over a Tupac hologram. To say that the Hatsune Miku phenomenon doesn’t usually click with me is an understatement — although there are a few songs I enjoy.

With VR Future Live, things go from a series of rhythm games that I’m bad at to a much simpler and far more enjoyable experience. The idea of being a fan in a concert has always been the narrative device used, but now, it comes to life because you are actually in a crowd with a slew of other fans flinging glow sticks all around. You can look around and be taken in by the sheer spectacle and damned if this didn’t just grab me the second the concert started up. Between the fancy light show, Miku’s ever-changing size and always-perfect choreography, it makes for a fun show — with the game aspect being fairly minimal.

The rhythm stuff that always killed me in prior Miku games (or any rhythm game for that matter) was largely a non-factor. Rhythm mini-games pop up mid-concert, but only last for about 30 seconds or so. Otherwise, your only mission is to have fun and move your controller around to the rhythm of the song — and all you really need to do there is copy the on-screen movements given to you and get your timing roughly in-line with the crowd. For someone who is terrible at rhythm games, this is absolutely goof-proof! You can even move around the arena via button presses to get a different view of the action. 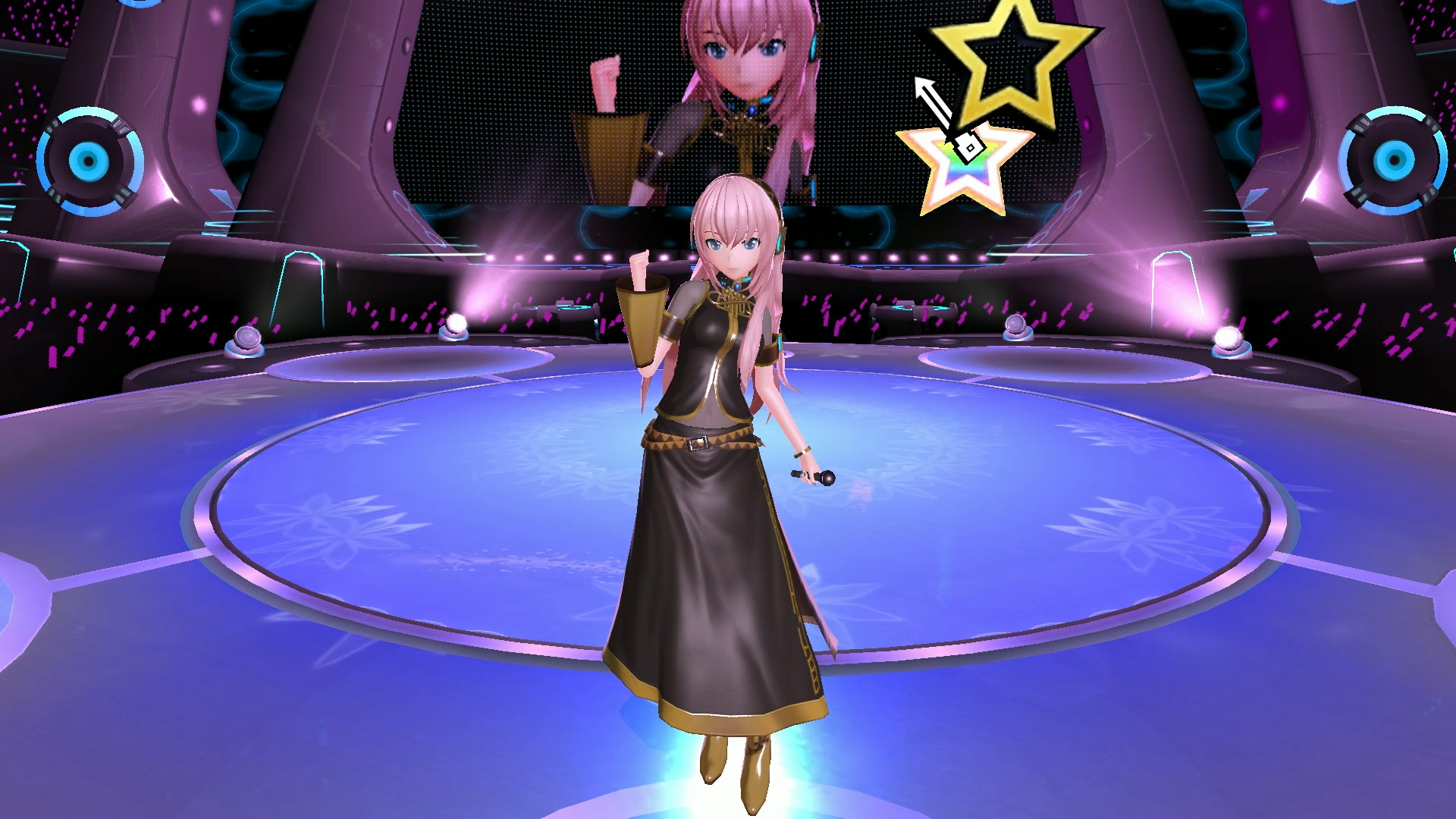 It’s a pretty darn addictive experience since it’s non-stop movement and you’ve got all these bright lights and cheery music surrounding you. Moving the controller either forwards and backwards or side to side replicates whatever object you’ve been given at the concert. It starts as a glow stick, but the better you do, the more you get. I wound up with a saber made of light and a tambourine by the end of the show — and my exceptional performance led to the excitement meter reaching its highest point and getting a one on one encore performance.

In theory, this is the peak of the game. In reality, this is just kinda weird and creepy as a concept and in virtual reality, it’s even stranger! It’s just you and her in this grid paper-design room with her singing. There’s nothing to really do, you can’t move anything but the controller, and there’s no crowd or light show. It would have been better as a tutorial area because it’s a bring-down from a gaming perspective. 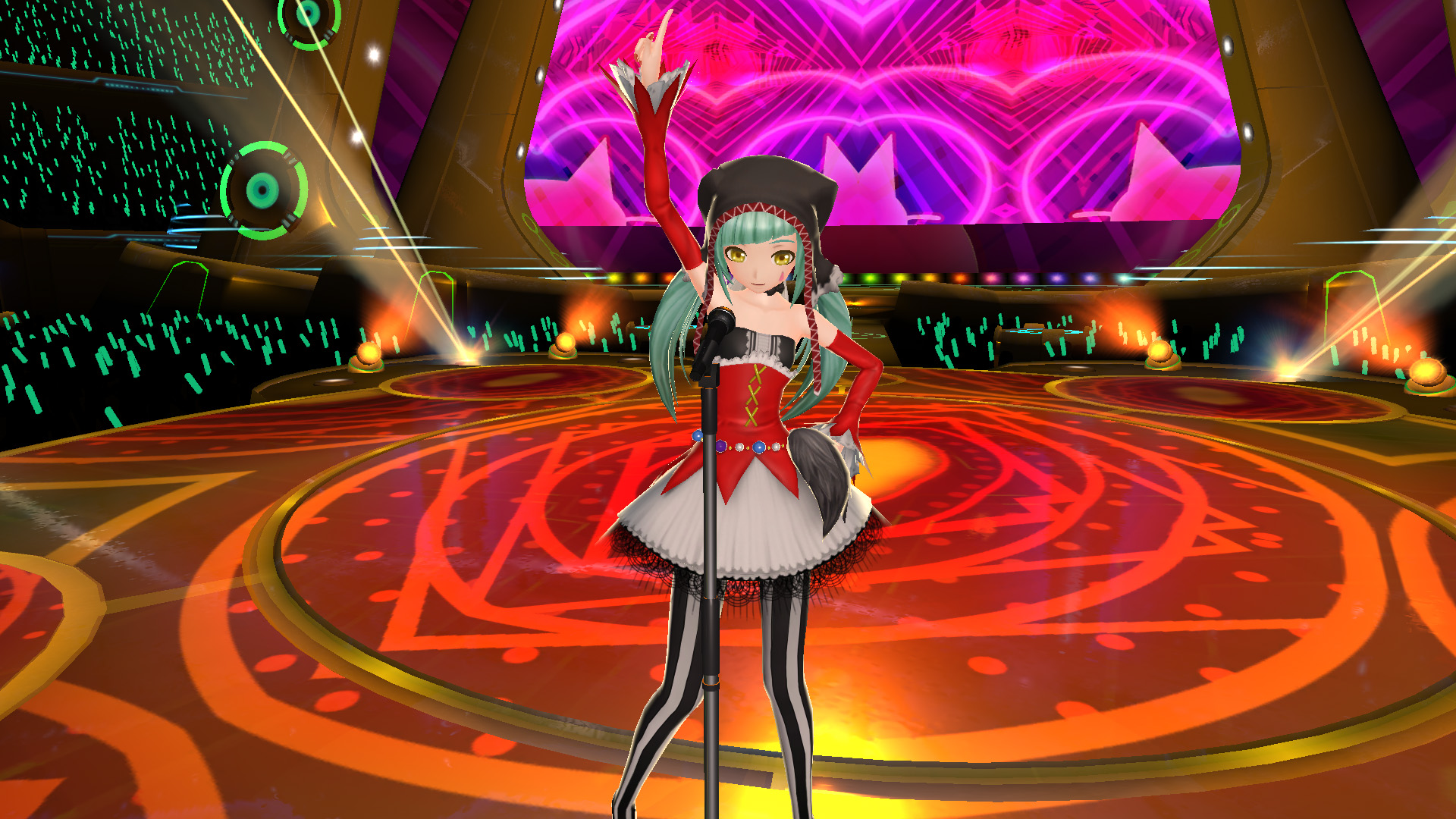 As a concept, Hatsune Miku: VR Future Live: 1st Stage is a solid buy. There are a reasonable amount of songs to enjoy and the idea of being at a virtual concert is done perfectly. You really do feel like you’re a part of the show and it does everything it sets out to do. For those who love everything Hatsune Miku, it’s a great pickup and even for those who just don’t “get” it, check it out because it is something that can convert you into at least seeing the merit behind the concept. 1st Stage is a lot of fun and while the experience is brief even with multiple setlists, the idea of replaying it to get a better performance is always there — so it has a fair amount of replay value.