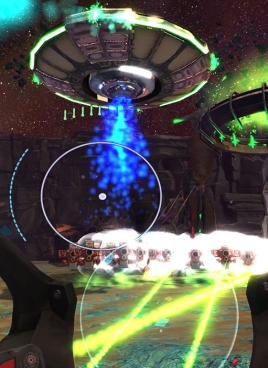 The Stardust series has been the PlayStation’s go-to twin-stick shooter for many years now. It originally filled the void left by their consoles lacking a Geometry Wars game, but did things differently enough to stand out from that franchise’s shadow. On the PS3, Vita and PS4, it has received high marks for not only being a great twin-stick shooter — but one that gave you a lot of content to enjoy. The franchise’s first VR entry continues that trend by giving Super Stardust fans a lot to sink their teeth into.

In theory, you would think that a twin-stick shooter in VR would just have you piloting the craft and shooting away — and that’s what is done in this game’s core mode. You can either choose to explore the world without enemies to get a handle on things, or you can choose to just hop right in and blast away. Going from what has always been an overhead view to a cockpit view takes some getting used to — but fortunately Super Stardulst Ultra VR eases you into things with a slow barrage of enemies before throwing you into the thick of things with a ton of enemies coming at you.

In the cockpit, you can see your HUD and tell where your enemies are with a quick glance down. This made figuring out a strategy much easier than in the regular game, where enemies could glob up on you out of nowhere. That can still happen if you panic, but the game itself gives you ample warning. Moving with the left stick remains a breeze, while aiming with your own head movements feels far more natural than just using the right stick. R2 remains your trigger, with face buttons launching things like EMPs and giving you other weapons with which to destroy the enemy horde. From a first-person perspective, the craft is reminiscent of Blaster Master, only without much in the way of necessary exploration. Here, some of the fun came from destroying a horde and then just seeing some sights around the area. Looking around and surveying the scene is normally something you can only do in a photo mode of a game — but with VR, you can do that whenever you have a free moment and it envelopes you more into the experience. Fortunately, for those seeking a more traditional experience from the series, you’ll find a lot to enjoy here too. 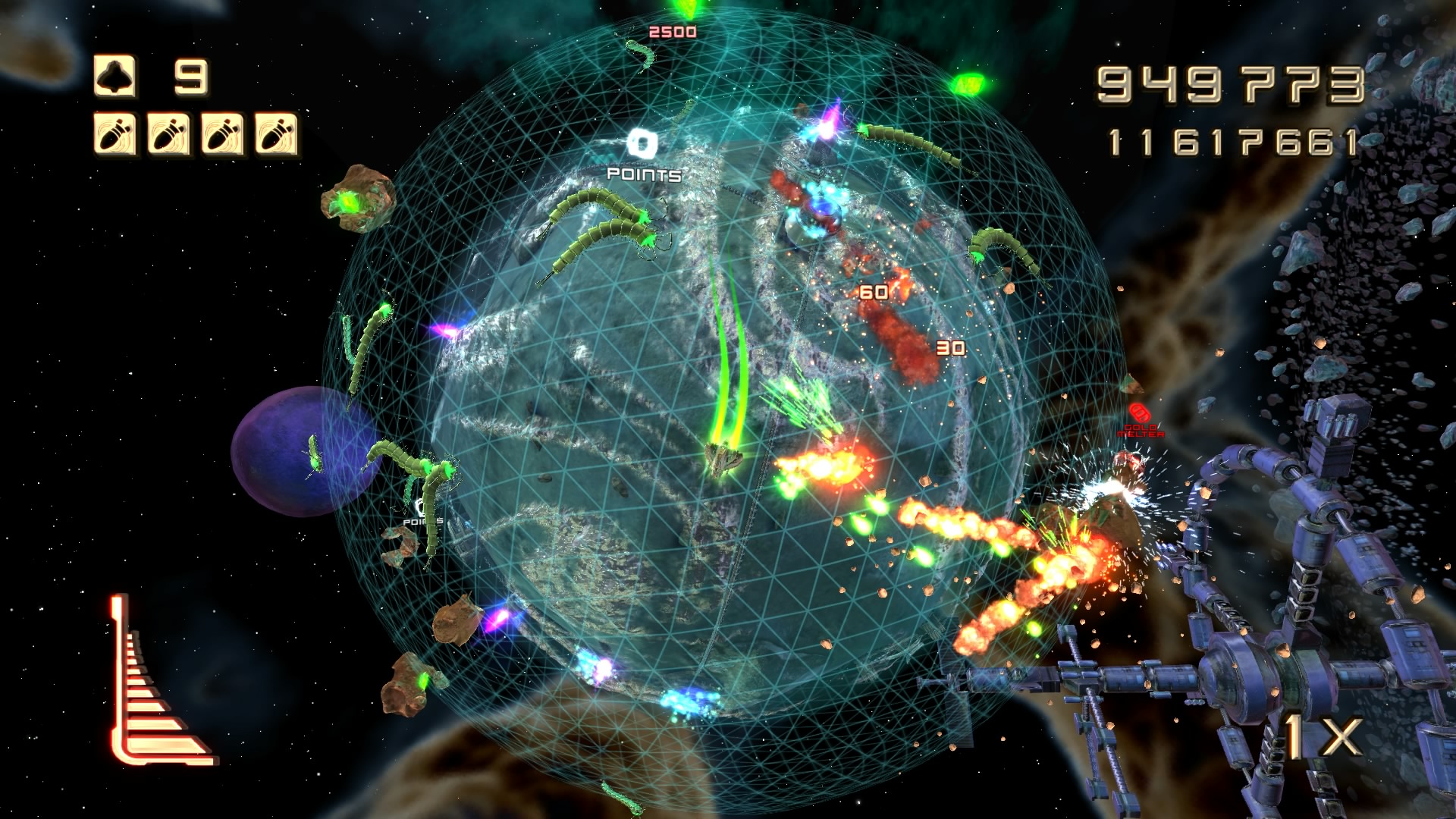 Super Stardust Ultra‘s traditional modes can all be enjoyed in VR mode as well. You won’t be in a cockpit view, and will instead have a bird’s eye view of the action. You can still survey the scene around the play area by moving your head — but instead of seeing the craters and eerie skies from the cockpit, you’ll be staring into space. Fortunately, unlike in school, this is actually a very good thing and allows you to get a VR view of space in some form. It’s a pretty cool deal and something that can lead to death if you go star gazing during combat — so it’s best to wait until after the battlefield has been cleared before checking out the sights. 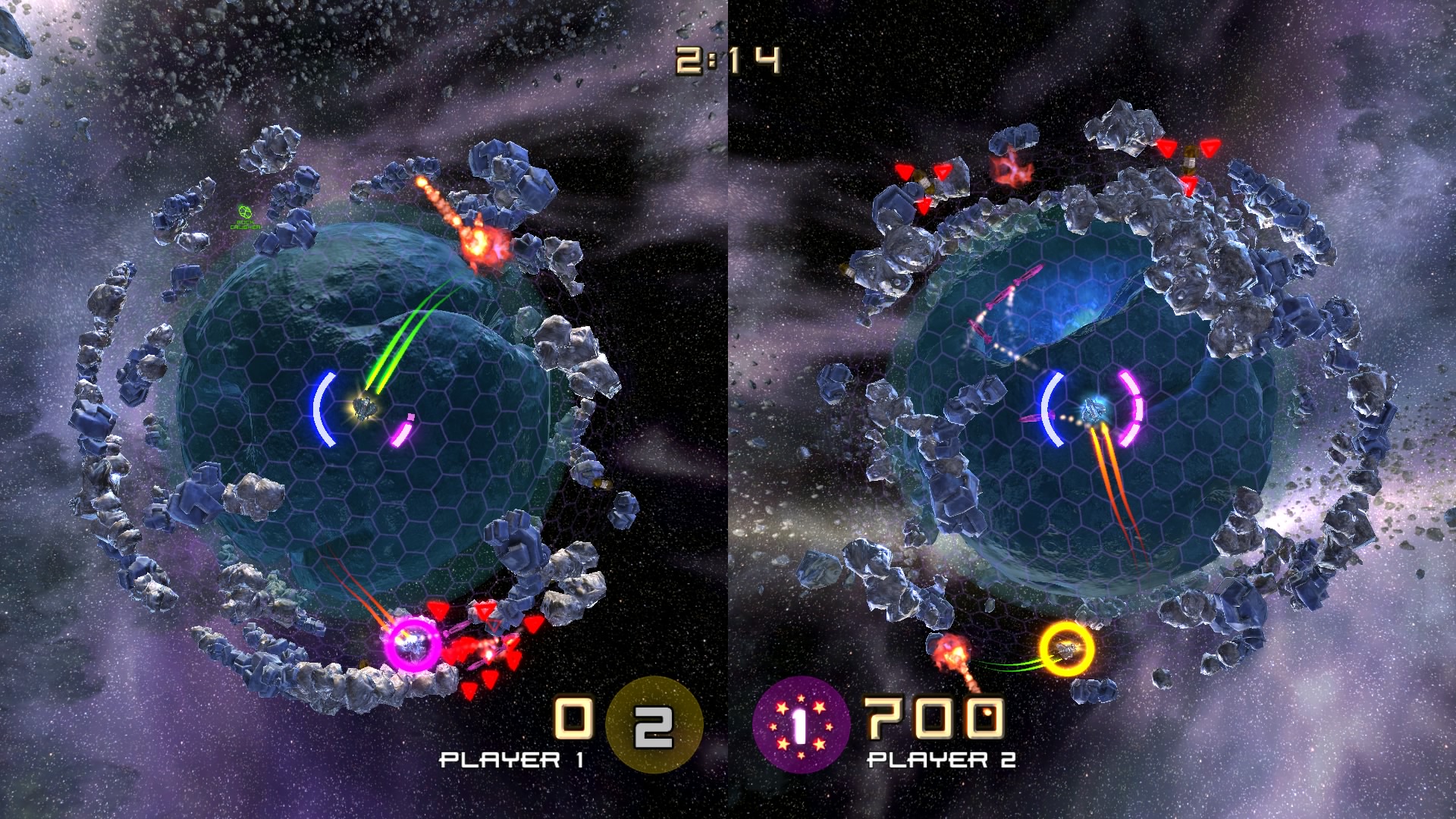 Super Stardust Ultra VR does everything that had made the series work before and expands on it with a new cockpit view. This really brings the action close to you and sucks you in like never before. Anyone who hasn’t had a chance to check out the series should do so now, because you get a lot of content in just one package. Beyond the standard Super Stardust Ultra game, you also get all of the new VR content and the VR-optimized content for the regular twin-stick shooting action too. It’s a great value and should give anyone with a VR headset and an itchy trigger finger a lot of replay value.