Until Dawn absolutely shocked players when it launched in 2015. It provided a slasher storyline unlike any other game out there, offering a multitude of choices which factored into which ending you received. Since then, the fanbase have been desperate for more horror goodness from Supermassive Games and the developer followed up their cult hit with a title exclusively for PSVR. Until Dawn: Rush of Blood is a bit of a spin-off and, in many ways, the two games seem completely unconnected. Whereas Until Dawn was an exploration-focused adventure game, Until Dawn: Rush of Blood is an on-rails shooter akin to what you might play at an arcade.

The setup is relatively simple. For whatever reason you find yourself strapped into a rickety roller coaster at a creepy carnival. While the attendant carny seems friendly enough initially, he’s also about as eerie as the surroundings. After a quick, safe trip shooting at targets things quickly take a turn for the worst. This “Rush of Blood” roller coaster is set to take players on a disturbing journey where they’ll have to fight for their life. Along the way you’ll come across killer clowns, gigantic spiders, living mannequins, and a few other baddies which are known for scaring the heck out of people. No matter what the enemy, your response should always be the same – shoot them! It’s not particularly deep gameplay, but that’s okay.

Until Dawn: Rush of Blood supports two different control schemes. One makes use of two PS Move controllers for aiming weapons. As the protagonist dual wields guns throughout the game, this is by far the best way to play (with a caveat). Sometimes, a slight drifting of the screen can cause an annoying issue where the on-screen aiming slowly un-centers itself. Turning the headset on and off again may resolve it, but it’s a shame this has happened to some gamers at all. Those who either do not own PS Move controllers or opt against using them can instead play via a DualShock 4. In this style of play, both guns are controlled primarily by the motion of the single controller. Of course, this is tougher as far as aiming at multiple enemies is concerned. Fortunately, the game is still completely playable this way after getting accustomed to the control scheme. 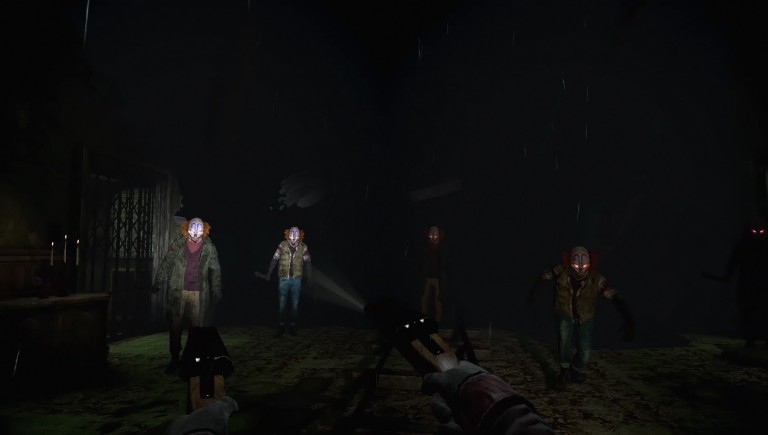 Whichever way you choose to play still results in a similar experience of being carted through seven different stages. Each is themed with a different spooky element in mind, though you’ll find humanoid enemies are still present through each and every level. Similar to most other PSVR games out right now, this is meant to be a quick experience. Playing through the game from start to finish takes under two hours, though most are likely going to need a breather between stages (due to frightening elements rather than nausea). Supermassive Games attempted to leverage this relatively short playtime with leaderboards. For most, though, it doesn’t seem like the type of game to replay time and time again. The initial ride is enjoyable because of its unpredictable nature.

The setting of Until Dawn: Rush of Blood is both superbly creepy and utterly cheesy . Multiple times there were scenes within the game which made me look away out of disgust. The soundtrack and audio in general enhance this atmosphere’s frightening tone. Unfortunately, like most other modern horror games, there was simply too much usage of jump scares. There’s at least one per level. It’s great at scaring people the first time but after that it just becomes an eye-rolling event that everyone sees coming. After a while, the levels also feel like they begin to blend together, losing that carnival atmosphere entirely. As for the ending, it comes across as a lot goofier than was likely intended. Still, it’s one heck of a wild ride. 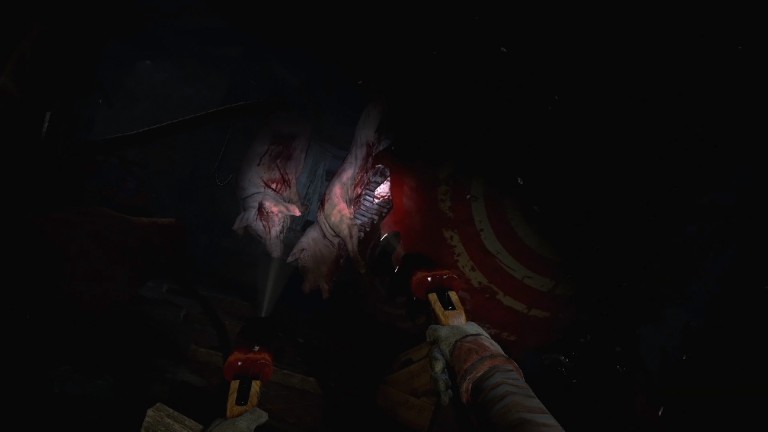 In many ways, Until Dawn: Rush of Blood succeeds despite itself. The on-rails shooter genre is rarely all that frightening, yet somehow Supermassive Games put together a ride which is fun, scary, silly, and an enjoyable romp on PSVR. Some have had slight technical issues while playing, but fortunately they can be mitigated by switching from Move to DualShock. No matter how you play, the core gameplay still works well even if it’s incredibly simplistic. Of course, the atmosphere’s wonderfully unique nature cannot be denied. Those looking to freak themselves (or friends) out in virtual reality should look into Until Dawn: Rush of Blood.