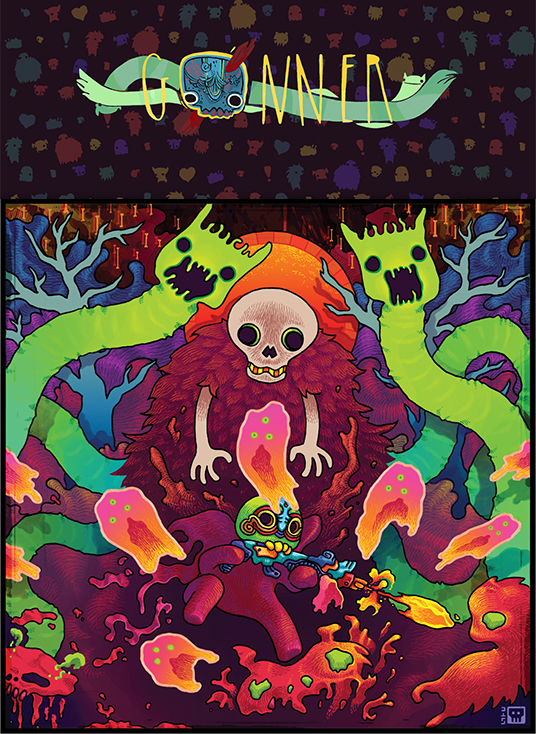 Life without a head seems like it would be difficult at best. A weird afterlife where you get to hang out with Death and a giant flying whale named Sally, on the other hand, makes headlessness far less of a problem. Ikk is on a quest to find something nice for Sally, exploring and shooting his way through the underworld, and Death is there to hand out spare heads with unique abilities to help get the job done. It’s good to have friends, especially when Death can make sure that any mortality-impacting errors can be brushed aside as mere setbacks, allowing Ikk to keep on trying to gun down all the weird and hostile creatures that inhabit the ghostly realms where the coolest gifts are hidden.

Gonner is a lovely and weird run & gun roguelike where every level is illuminated by the lives of the monsters hanging around them. The art style is like a blacklight chalk drawing, constantly sketching in and erasing the details as you run through and kill the enemies lighting up the area. Ikk is a little guy with a big gun that’s more than capable of clearing a path through the crowded underworld, and while he can only shoot horizontally (usually) he can also stomp any creature unlucky enough to end up beneath his ghostly feet.

Each run starts out at Death’s tree, with Ikk headless at its base and Death waiting to bring him the selected skull hanging from the tree’s branches. There’s only the single head to begin with but each new one found in the levels below gets added to the tree, while any guns and secondary items show up in the pre-game area where you select your loadout. Unlike most roguelikes, Gonner lets you pick freely at each run’s start from anything you’ve discovered while adventuring, but the trade-off is that the hundreds of items you might expect thanks to games like Starward Rogue or Binding of Isaac is trimmed down to a couple dozen distributed among all categories.

The levels of Gonner are randomly generated side-scrolling areas, relatively simple in their layouts but packed with wandering enemies. Everything is rendered in solid colors, no shading, with baddies being red, runes and tiny harmless creatures in purple, ammo and weapon effects yellow, and the platforms in whatever color happens to be illuminating them. Red and yellow tend to be the dominant colors thanks to the game not being shy about packing the screen with plenty of enemies to shoot, but even when darkness closes in after clearing the level of threats it doesn’t feel claustrophobic. The weird lands of the underworld are strangely friendly, despite trying to kill you at every opportunity. 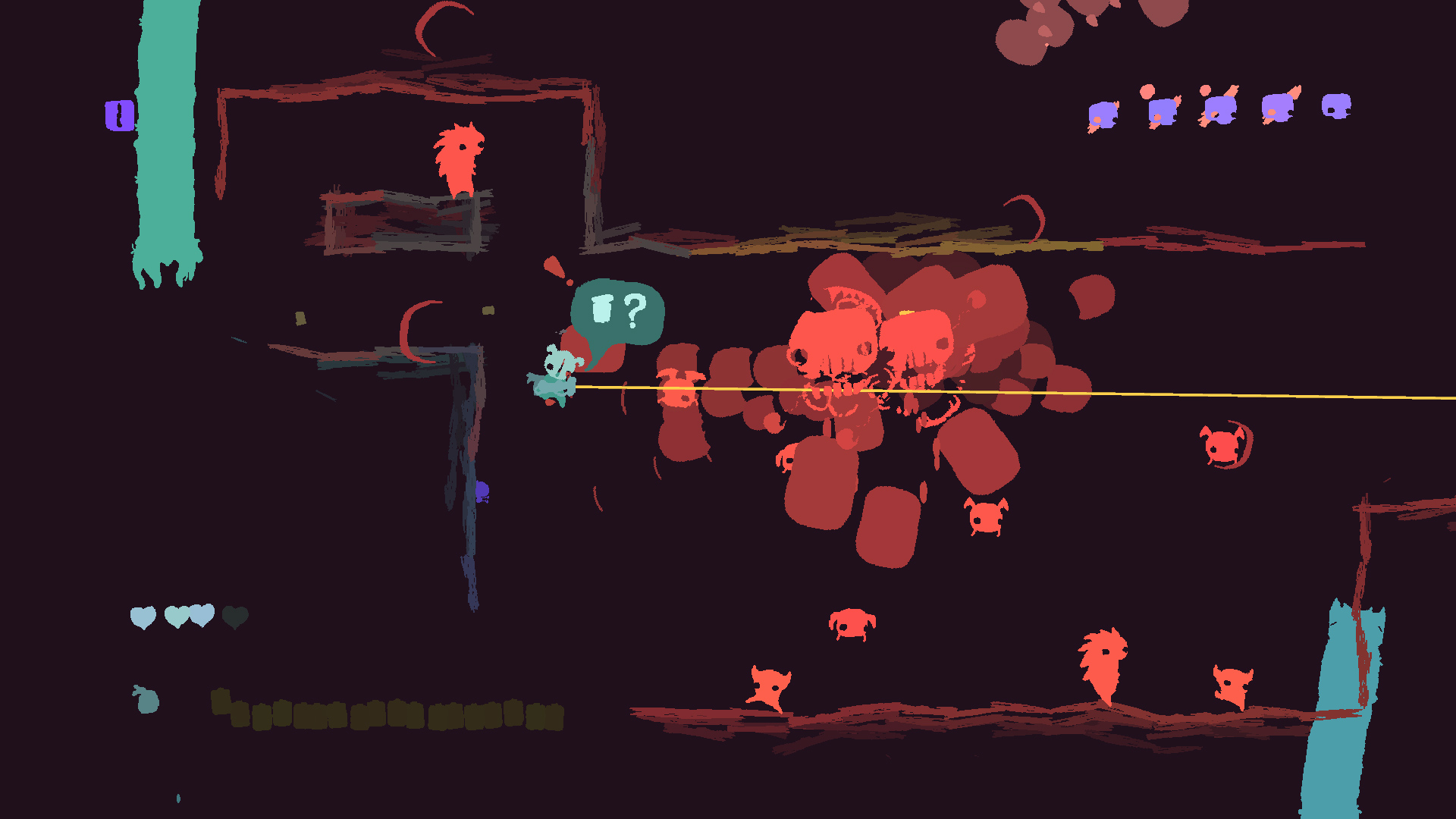 Thankfully, Ikk comes heavily armed. While he’s only got the single gun and a secondary accessory it’s more than enough to clear the levels, if only he can avoid getting hit. The regular pew-pew pistol is quickly joined by a shotgun with an excellent spread, and the laser cuts through multiple enemies at once. The initial accessory grants infinite reloads without the need for an ammo pickup, but the shark fin gives a nice multi-shot burst attack that doesn’t use bullets, and the weird thing that looks like a tea strainer surrounds Ikk in a ring of explosions that can do as much damage to him as the enemies if he’s not careful. The starting skull has plenty of health, the demon head lets Ikk slowly hover down back to earth after a jump, while the bear head upgrades the double-jump to a triple and lets Ikk do a flip, which can be combined with the shark fin’s multi-shot and recoil from the shotgun to basically fly across the level if you do it right.  There are some fun combinations to find with a bit of experimenting, but honestly the most useful head is the square one you get almost immediately in the first area.

The square skull negates the only real black mark on Gonner, which is the item drop on taking a hit.  It can lead to some interesting gameplay moments, as you retreat to a safe spot to plan an enemy-hopping course to retrieve all your gear while knowing that a single hit ends the run, but in practice it kinda sucks.  In the second area, for example, Gonner goes from having a series of caverns to taking place atop bottomless pits.  Drop your gun and it’s gone until you survive the level and the engine generates a random new one.  Worse, if you lose your head down the pit you’ve got to clear the area without taking any damage, and maybe you’ll get a new health-giving head on the next level or maybe it will award you that gun that got lost instead.  This mechanic is the opposite of fun, which is all the stranger when using the square head reveals how all the rest of Gonner‘s systems fit together so well.  Building a color-cycling super-combo is the wrong kind of annoying when the speed you’ll need to keep the chain alive leads to an accidental careless moment that can’t be recovered from.  Yes, Gonner is supposed to be hard, but it shouldn’t be aggravating at the same time.  Once I gave up on all the gameplay possibilities in the other heads I had a much better time, but it would be nice if it wasn’t required. 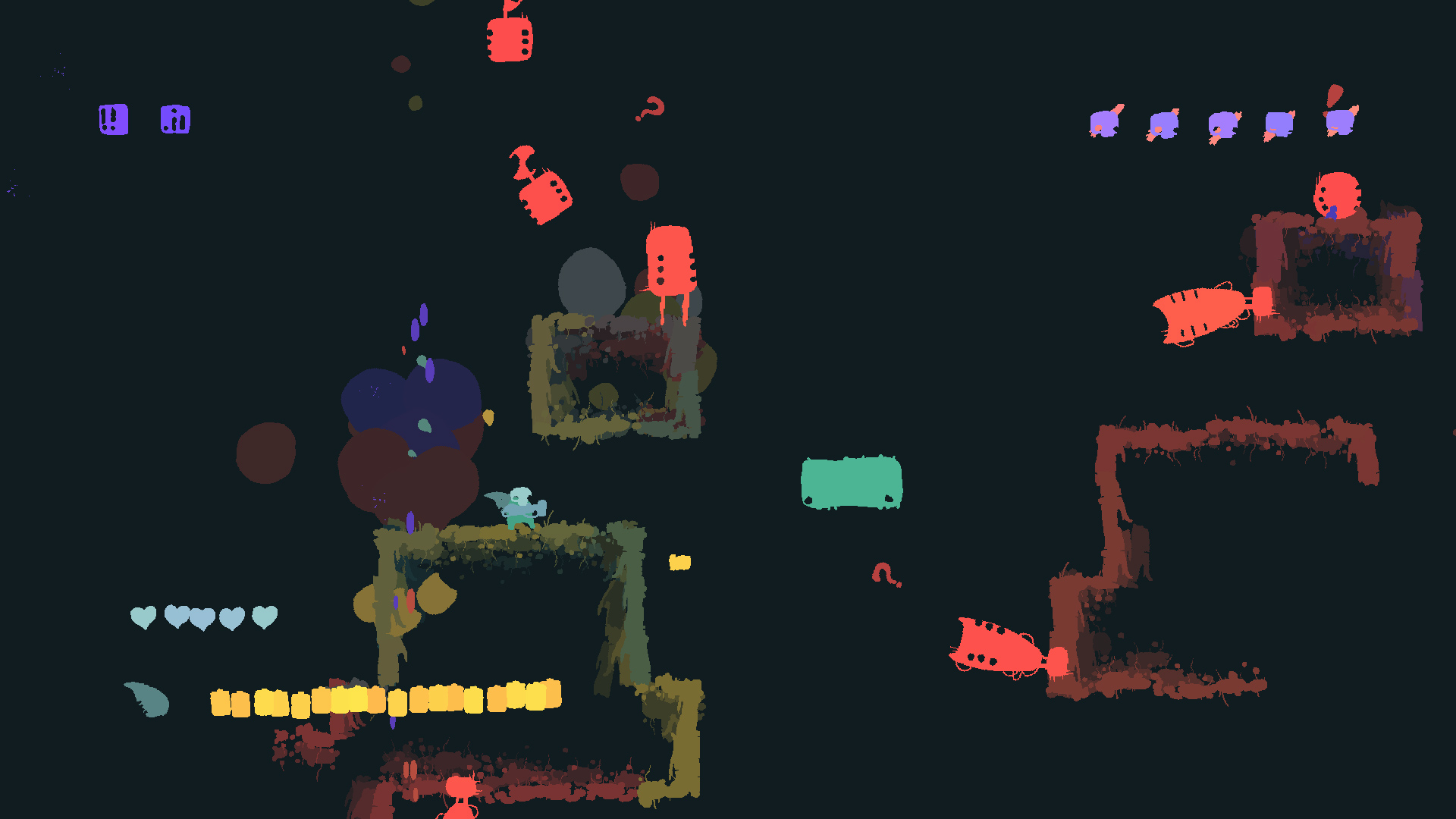 Gonner is a single gameplay mechanic away from being a fantastic run & gun roguelike, and if you don’t mind passing up a set of options, that problem can be ignored.  It has a wonderful aesthetic, blending cute and cartoon-creepy, rendered in a unique art style that does a wonderful job of tying all the elements together.  There are plenty of mysteries and secrets to chase after, and just blasting through the levels trying to keep the combo alive is a great time if you’re not in the mood for subtlety.  The enemies combine nicely to give a good challenge, and if the random room generator makes an occasional unfair area, you should still be able to get through untouched with a little creative use of Ikk’s skills.  Getting the most out of Gonner takes ignoring an entire section of the roguelike’s equippable items, but once you’ve yielded to the inevitable, the game shines through as a strange and completely charming journey through a wonderfully odd underworld.