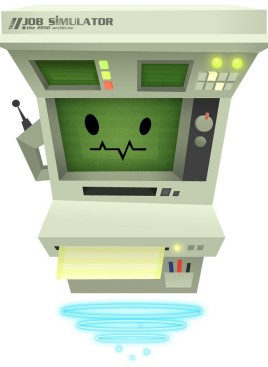 When the HTC Vive headset launched for PC, it came with a selection of free games – one of which was Job Simulator. Despite the overwhelmingly bland name, it proved to be the most enjoyable title of the launch lineup for many. It remained exclusive to the Vive due to the fact that the Oculus Rift owners did not have access to hand controllers. Thanks to Sony’s decision to use Move controllers with PSVR, this made Owlchemy Labs’ path to bring Job Simulator to PS4 much easier. Now that the fan-favorite Vive title is available to PSVR owners, it’s finally getting an even wider amount of recognition. But is this really a great way to play the game in comparison to the original? Is it worth playing even without an awareness of how it runs on PC? The answer to this question will depend on your experience with virtual reality up to this point.

First, let’s explore what exactly Job Simulator is. As the name suggests, this is an experience of taking on various jobs in a semi-simulator fashion. Unlike most serious sim titles, however, it makes humor an important element. This is evidenced straight from the premise. The game takes place in a world where robots manage all service work. As a human, you’re now entering into multiple simulations of everyday jobs to see what life was like in a pre-robot era. With that said, all the other characters you’ll interact with are robots (doing their best human impressions!). Each job is one we’re all familiar with to some degree, such as a cook at a restaurant, office worker, and more. These positions are painted as utterly mundane by default. What makes these simulations fun is the incredible amount of things to do within each job scene.

A simple example of this is the chef role. Sure, you might be armed with a tiny kitchen and few ingredients, but there’s a ton going on within the space. Tools such as a microwave, toaster, and stovetop are included as well as a few other goodies. As you play, robots give you new assignments to complete. One might ask for a pizza while another wants a sandwich. The thing is, you can really tackle these tasks in a wide number of ways. Instead of restricting the players as most games do, Job Simulator’s open-ended nature allows you to complete tasks with basically anything. The game also ensures that funny things happen when you try something weird. Weirdly enough, there’s also something oddly satisfying to simply doing what the robots tell you to do over and over again. 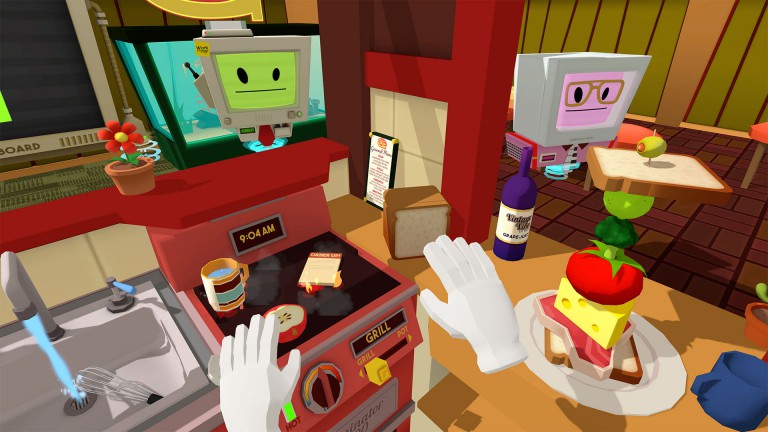 Of course, there’s the matter of comparison between PSVR and HTC Vive. The biggest difference is not in regards to visual fidelity because Job Simulator doesn’t require pristine graphics to be enjoyable. It’s the matter of scale. On the PC version, there are multiple in-game room sizes dependent upon the size of your actual room. This room scale sizing functionality simply doesn’t exist for PSVR. Even if your room surrounding the PSVR is totally cleared, you’re still stuck with the smallest room size in game. There is a small amount of room scale-ness, however, in the fact that you can step forward once or twice to reach out to a far away object. Just be careful of accidentally hitting objects or people when attempting to do so.

There’s also the matter of the Move controllers when compared to Vive’s controllers. This is not to say that the Vive has incredible controllers, but they allow for greater precision than the Move was ever designed for. As such, Job Simulator becomes an experience full of fumbling about. It’s funny on one hand, but also a little annoying when you know exactly what to do and keep messing up. An incredible part of Job Simulator originally was that it conveyed a feeling of serious immersion in a virtual space. You can get a similar feeling in PSVR, but it’s harder to come by due to sometimes needing to struggle against the technology. 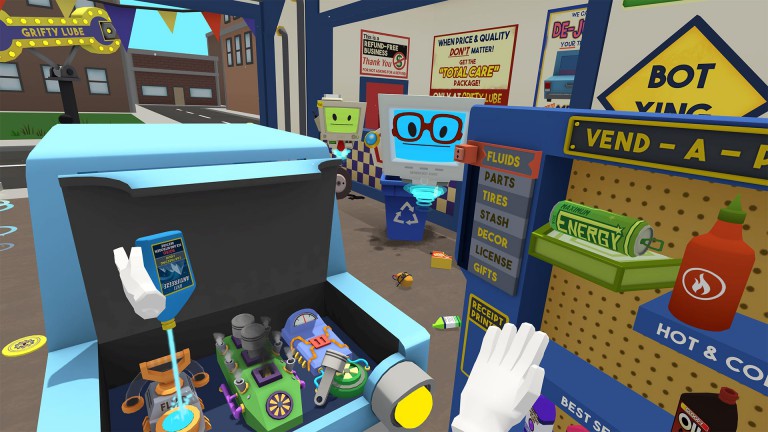 Job Simulator is not best played on PSVR, but Owlchemy Labs still did an incredible job translating the game to PS4. They managed to retain the core of the experience which means folks are still set to have fun playing. It’s just a shame that the technology currently paired with PSVR (Move controller and single camera) do not allow for the complete fidelity of play required to truly make Job Simulator an amazing virtual reality experience. Still, for those who only have PSVR, it’s an enjoyable look at the silliness that virtual reality is capable of.