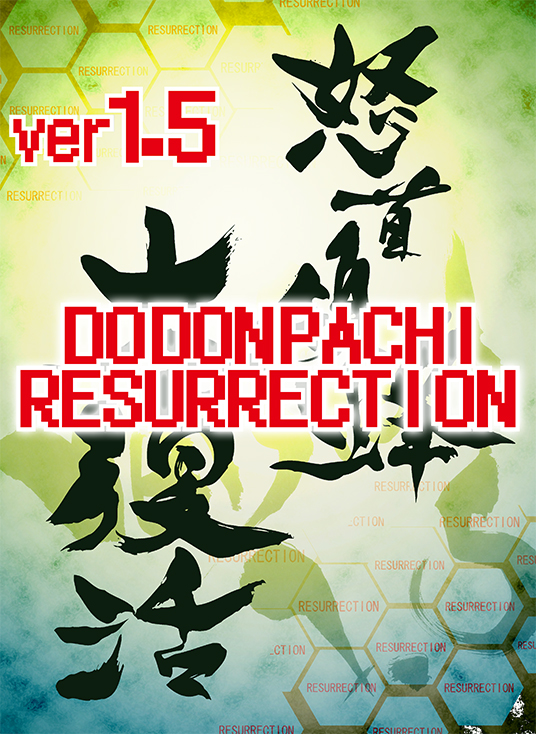 There’s a moment in DoDonPachi Resurrection that kicks in the very first time the game fires up. The familiar Cave logo gives way to a title screen, and then you hit start and….. *Whump!* Every game mode imaginable is right there, waiting to transform what’s already an excellent arcade shooter into a giant bullet-hell treasure box. It’s actually a little overwhelming to begin with, but thankfully after a few games it becomes clear that no matter which of the eight modes you pick it’s going to be one hell of a ride.

So, just to clarify before diving in, DoDonPachi Resurrection contains-

Each of the modes plays differently from the others, with unique mechanics, scoring techniques and pickups to figure out. The basics remain roughly similar, though, and on the surface aren’t even particular complicated. At each game’s start you choose one of three ships, with shot type divided between straight ahead, spread or angled depending on ship’s movement. The aircraft can then be further modified by the game Style, with Bomber giving you the self-evident ability, Power loses the bombs but lets the gun have a super-strong boost and Strong combines the two styles into a single overpowered rush of destruction. You can also choose to auto-bomb or not, with auto using the bomb stock to release a small explosion rather than dying on taking a hit. You get a much bigger and more damaging blast if you use the bomb manually, but it’s hard to complain about not dying. 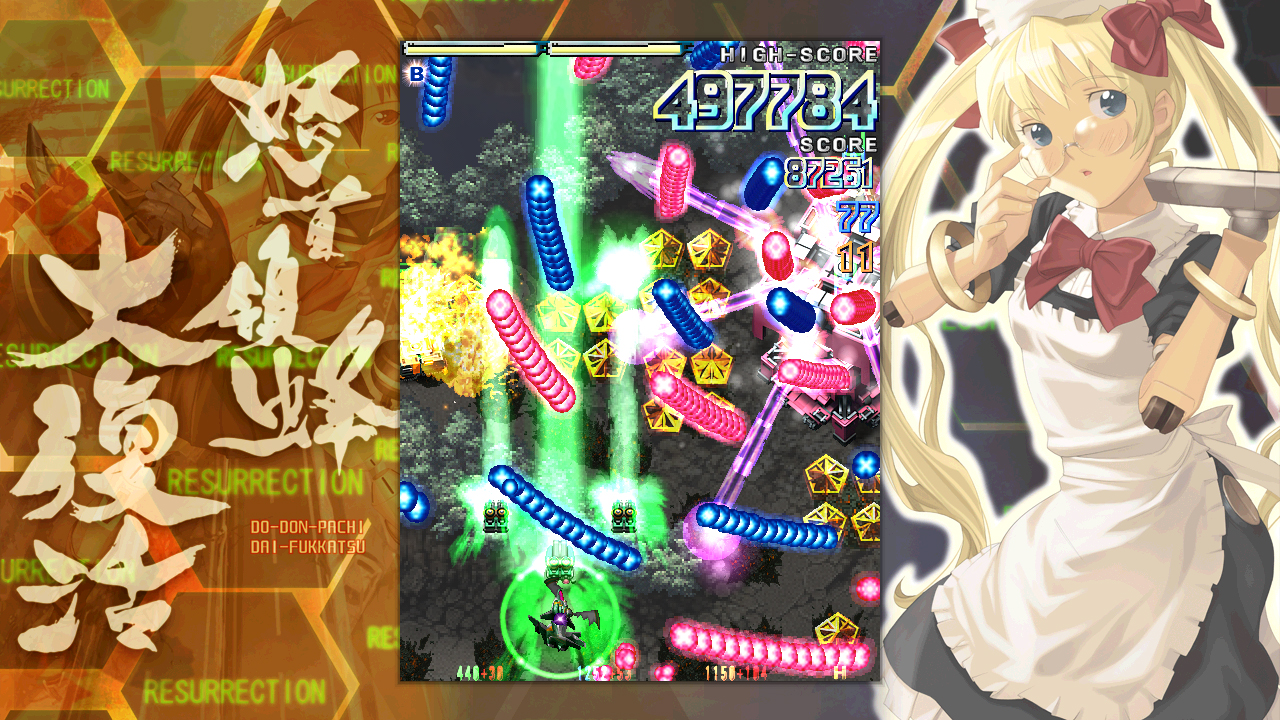 After that it’s time to get shooting, filling the screen with firepower from an aircraft that’s all offense, very little defense.  Each of the three ships come with the same abilities- shot, bomb, and hyper mode, with the only difference being the pattern in which the primary gun decimates the screen with unrelenting laser death.  Tapping the shot or holding down the rapid-fire button lets loose a wave of bullets, while holding the shot turns the gun into a single, and very powerful, focused laser.  The laser has a secondary use besides an ability to carve through the toughest enemies, because it also pushes back against enemy laser fire.  In Bomber mode the B button drops the expected screen-clearing blast, while in Power it trades a good percentage of ship speed to upgrade the laser from standard to massive, switching from Normal to Boost mode and back again at will.  The final ability is Hyper mode, and this is where the really interesting decisions kick in.

Hyper mode is enabled when a gauge underneath the score is filled up and flashing, and its fueled by destroying enemies.  Different modes have it fill up at different rates, but once available you’ve got some choices to make.  Activating Hyper not only gives a couple of seconds invulnerability but also turns the primary shot into a screen-filling wave of overwhelming power.  Holding down shot for the laser lets the screen fill with bullets, and switching back to rapid-fire means your primary gun can cancel those bullets and transform them into point bonuses.  Hyper mode is not only incredibly useful in the hardest sections, it also pays of handsomely in score as you use it to rack up the bonus stars.  Do it right and you can blot out the background almost entirely with a wave of stars, making your ship a combination god of death and point-munching Pac-Man. 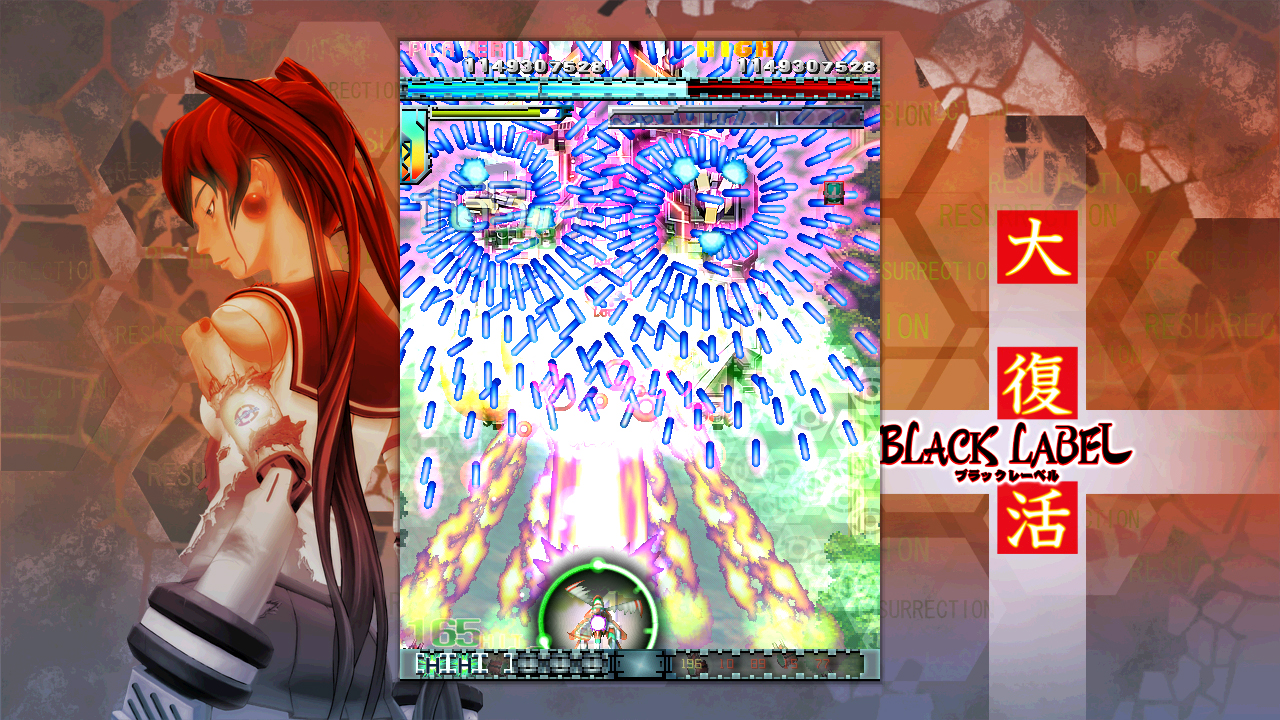 It’s a fragile god, though, and one stray bullet is all it takes to ruin a good run.  That’s especially bad seeing as there’s rarely fewer than a couple dozen projectiles on screen at once, and while the glowing hit-box is small there really isn’t much room to maneuver it through when the action heats up.  The reason your ship is crazy-powerful is because it’s necessary, and even playing on Novice will probably take a little credit feeding the first few times through.  Normal and Black Label get completely out of hand, but no matter how insane the patterns get survival is never impossible.  Learning to dodge like cold machine of pure logic and reaction is an option, of course, but with proper bomb usage, careful exploitation of Hyper mode, and a whole lot of practice it’s not entirely impossible to survive the worst DoDonPachi Resurrection throws your way.

And that’s the very basics of the gameplay system, minus a few details like the collectible bees or keeping the enemy kill-chain alive.  Each of the eight modes plays very differently from the others (barring the Novice modes, which are just easier), and there are deep scoring mechanics to all of them far outside of what this review could contain.  This brings us to the only major complaint, in fact, and that’s how thoroughly uncommunicative DoDonPachi Resurrection is in explaining any of this.  That moment mentioned right at this review’s beginning where you see all the different modes spread out in front of you?  There’s no way of knowing that 1.51 is such a different beast from 1.50, or what the two Normal and single Black Label Arrange modes are.  It’s fun to hop in and explore, picking up information as you experiment, but that’s only going to take you so far.  Not having a full breakdown of the intricacies of the scoring mechanics isn’t a deal-breaker, but it would be nice to have it explained that shot-canceling via the Hyper drives up the kill-combo for a higher score multiplier. 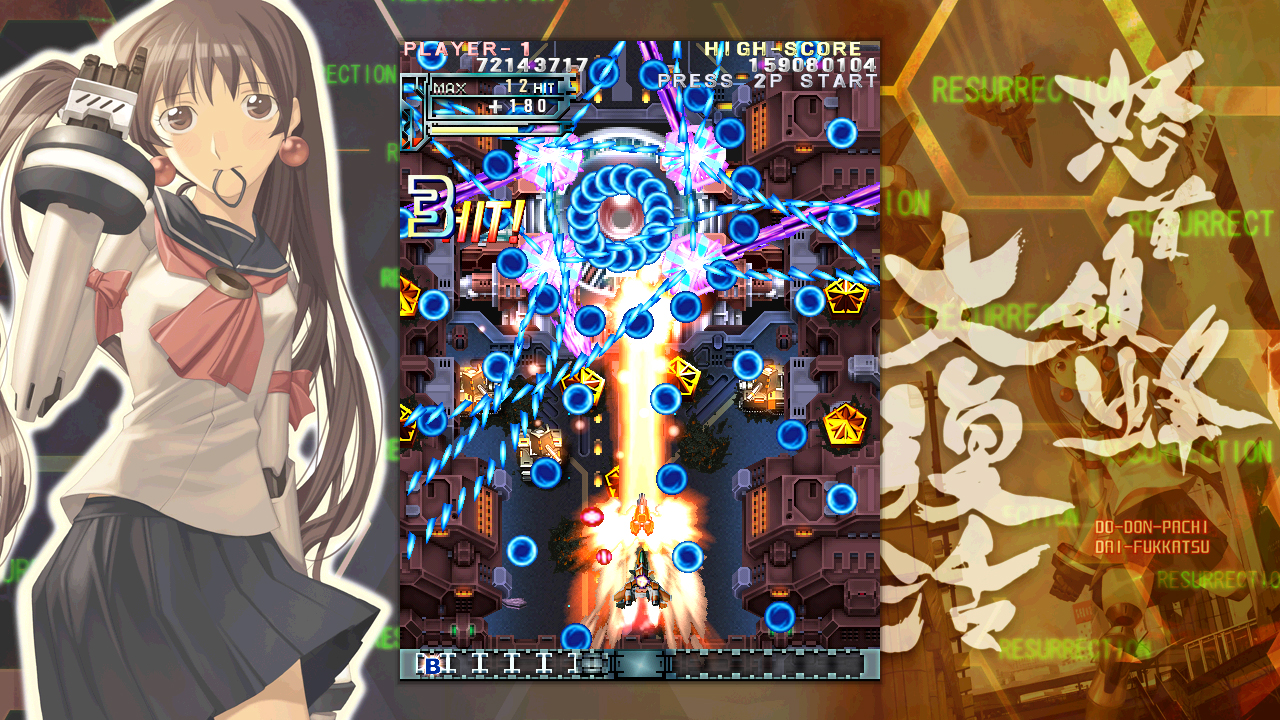 DoDonPachi Resurrection is a monster of an arcade shooter.  While it could stand to be a little more helpful in teaching players its basics, there are so many versions, modes, styles, and options available that there’s almost always something new to discover.  Bouncing from DDP 1.50 to Black Label, score-hunting in Arrange B, then trying to one-credit complete Novice before diving back into a version picked at random makes the game endlessly replayable.  The tempo of the levels is just about perfect and the bosses, despite their “giant schoolgirl robot” designs being completely out of place, all put up a great fight with multiple tricky attack patterns.  There’s a wealth of incredible shooting in DoDonPachi Resurrection, showcasing Cave not just at its finest, but most creative as well.