For better or for worse, Nintendo has been among the leading innovators in video game hardware.  Some of these innovations such as the dual screen have been successful, but on the other side of that coin who here owns a Virtual Boy and still plays it regularly?  The Nintendo 64 controller was ugly enough to be a modern art masterpiece, but there are plenty of great exclusive N64 games that feel natural on that monstrosity.  Ultimately it is not simply the technological advancement that Nintendo introduces that determines its inherent level of quality, but whether or not developers are able to utilize these innovations in a way that makes gameplay fun, which brings us to this month’s topic.

Castlevania Aria of Sorrow was among the best available titles for the Game Boy Advance, and you can read my fan boy gushing about its greatness right here.  Naturally a couple years later when I learned the next Castlevania game was going to a direct sequel where we once again get to control the soul stealing Soma Cruz I was pretty excited.  Even though there was something I read in an interview that caused some concern, I decided to give the game the benefit of the doubt and be optimistic based on how well the last three handheld Castlevanias were.

For the most part my optimism was not misplaced, as Castlevania Dawn of Sorrow retained everything great about Aria of Sorrow but made some improvements.  Music quality and graphics were a bit nicer since it was on the new Nintendo DS which had more processing power than the GBA, and the second screen allowed other information to be visible while playing the game.  In a lot of ways this title used a great game a template and was able to improve on it.  Honestly, this seemed like a new contender for the coveted spot of my favorite Castlevania game with great creature design, level layout, soundtrack, and the fun Tactical Soul System.  And then we encountered our first boss fight. 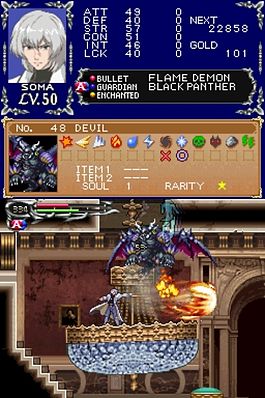 The interview I mentioned said something to the effect of there will be a new Castlevania for the DS once they figure out how to incorporate the stylus, and did they ever incorporate that stylus.  Touchscreen controls are generally good things, just look at the WiiU, the PlayStation Vita, cellphone games, and the fact that 11 years later Nintendo fans are using the 3DS.  The thing with touchscreen controls is they are not appropriate for all game styles.  Having to use the stylus with traditional Castlevania gameplay is about as pleasant as using alcohol based hand sanitizer as a sexual lubricant.  Hand sanitizer is awesome, just not for that purpose.

There are a few instances in this game where the option to use the stylus does not interfere with the game but when it messes with the boss fights, which are usually a highlight of any Castlevania, that is where it becomes a problem.  When a boss’s life is reduced to zero, it doesn’t die like a video game boss is supposed to.  Instead we get a glyph symbol appearing on the screen, and the stylus needs to be used to draw the symbol, sealing the boss away for good.  Admittedly this idea sounds cool in theory, but it ends up proving to be a bad one once it steps outside of the theoretical realm. 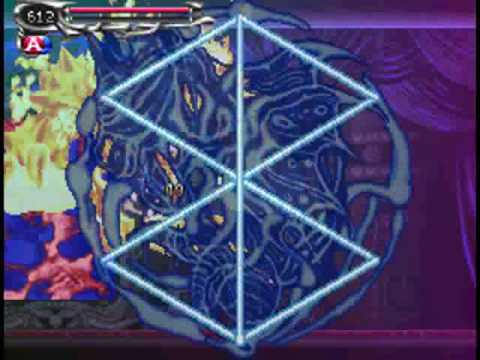 One problem with this is the disruption of the flow of the battle it causes.  Most boss fights are fast paced affairs and having to switch gears to trace a symbol breaks the excitement and tension that could be occurring in the skirmish.  There is also a logistics question of how one is to manipulate the stylus during this battle.  Do you balance the stylus between two fingers so you have it accessible when the time comes, or do you do a quick reach around to pull it out of the DS and hope you get it within the short limit?  Both choices work, just neither of them work well.  At the time there were finger tip styluses for purchase that may have worked better, but based on how often I see them at any gaming store I do not think they were very popular.

Failure to draw the appropriate symbol results in the boss regenerating a tiny bit of health, and once it knocked back down to zero it is time once again to whip out the stylus.  Most of these glyph symbols are easy enough to draw but that does nothing to make them enjoyable.  Falling off a roof into a rosebush is also easy to do, but that doesn’t mean this is an activity that most people are lining up to try.  The only symbol that I can recall proving difficult time and time again was the more intricate one at that one locust man boss near the end of the game.  I really wished that I could just take the stylus and stab him in his stupid head through the screen.  I would likely need to purchase a new DS, but part of me tells me it would be worth it. 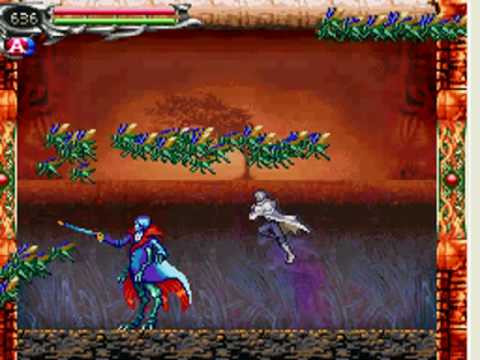 Truth be told even with the terrible implementation of the stylus, Castlevania Dawn of Sorrow is a wonderful game.  The stylus requirement at bosses does not ruin the whole experience, it just sucks the enjoyment out of boss battles like some creature sucks…um what am I thinking about?  I seem to have lost my train of thought, but for some reason I am thinking of something that drains the life out of another living person.  I’m sure it will come to me later.  I was able to complete this game, but this is one of the few Castlevanias I have only completed once because I simply did not want to deal with the glyph seals ever again.  The introduction of Castlevania to the new Nintendo system was disappointing because of this, which is really unfortunate because in all other areas Dawn of Sorrow is outstanding.  Thankfully I think Iga received enough negative feedback that this feature was abandoned in Portrait of Ruin and Order of Ecclesia.