Being a recent owner of a shiny (and bumpy) HTC Vive has filled this writer with excitement. I finally had one at home and I wanted any excuse to play with the device. This has paid off in spades, viewing the fact that I had titles such as Raw Data, Serious Sam VR and Alice VR made available to me in short order. This fantastic arrangement was bound to snap back directly in my face. From his human bone encrusted throne that is embedded on a pile of weeping orphans, our illustrious captain Steve passed down the poetic punishment that comes from making the devil’s deal. This comes in the form of Broken Window Studios’ Grave VR (to be fair, this is an exaggeration. Steve’s “throne” is more of a proper chair).

This title was handed over for review over the weekend ahead of its October 31 release date. When booting it up, it could be seen from the top menu that many things were missing, with “Coming Soon” taking up most of the chapter features. From the Steam store page, it was obvious that this title was coming in hot. The game was pushed back to the Halloween release so that extra work could be done. I goofed with it a bit, found it lacking, and decided to keep my mouth shut in hopes that the final code would show remarkable improvement. 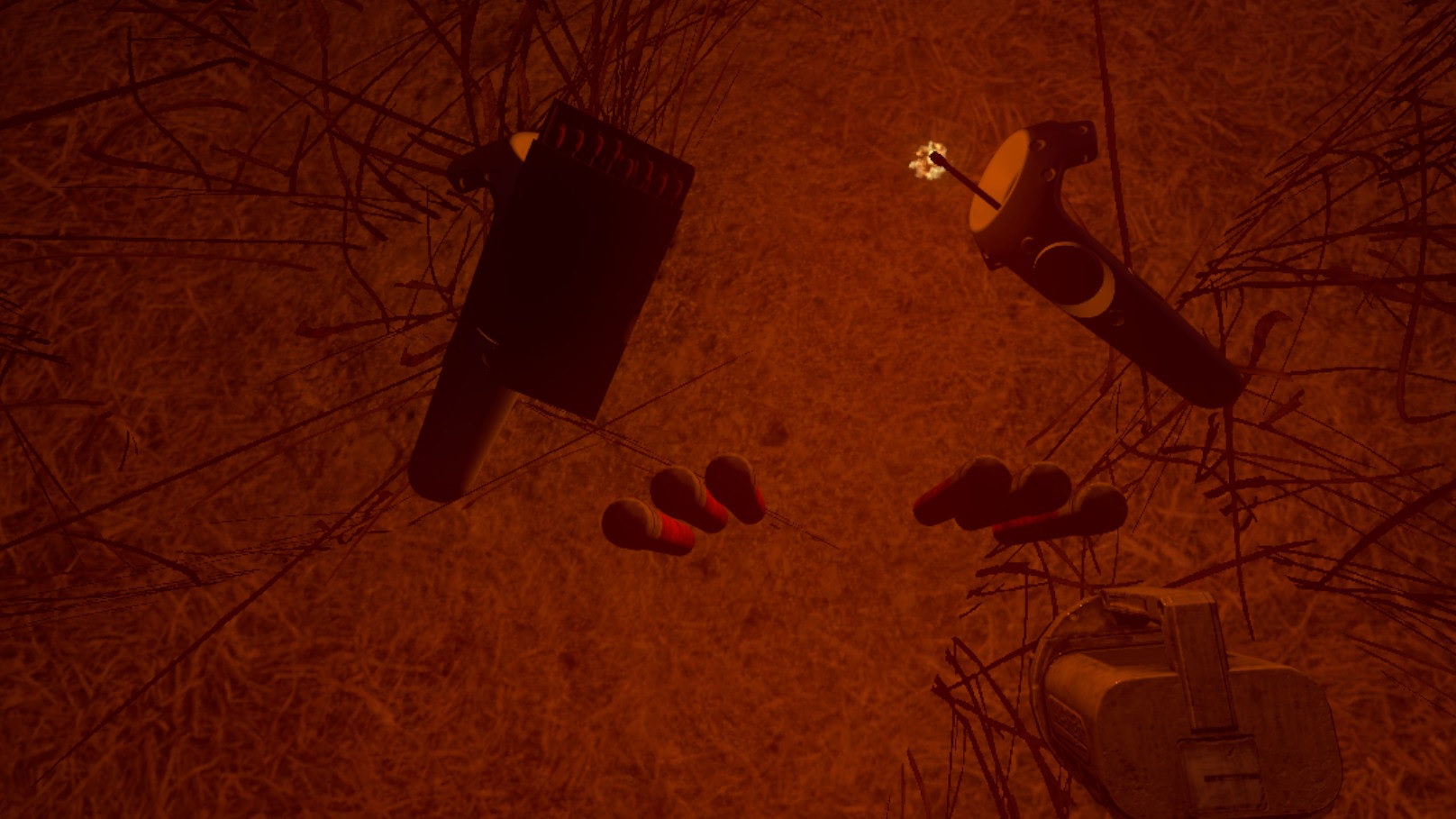 Damn. I left the quality in my other invisible belt.

The release day came and went, and everything was downloaded and ready to go. Booting up the game, I quickly discovered that I was facing the wrong direction. Menu options are chosen by looking at them for the briefest moment, and I found that I was looking at the exit game choice. So, load up and booted out immediately. At least it worked…  Starting the game again, I found that the “coming soon” markers were still in place, and the game did not improve. Oh, well. On to the story mode.

It turns out that the movement system is the same as the menu. The player stands in place, and looks at the item to move towards. For example, “rocks.” There are a series of tape recorders that cannot be picked up. Selecting them, though, allows the recording to play. A poorly acted story was told of a man lost in the desert “like Moses.” Interest quickly waned, and the most entertaining part was tossing a rusted can into the air and catching it, showcasing the title’s penchant for emergent gameplay. It also showcased some poor physics, as a missed catch caused the can to land straight up without out a bounce, as though it was filled with a solid chunk of iron. 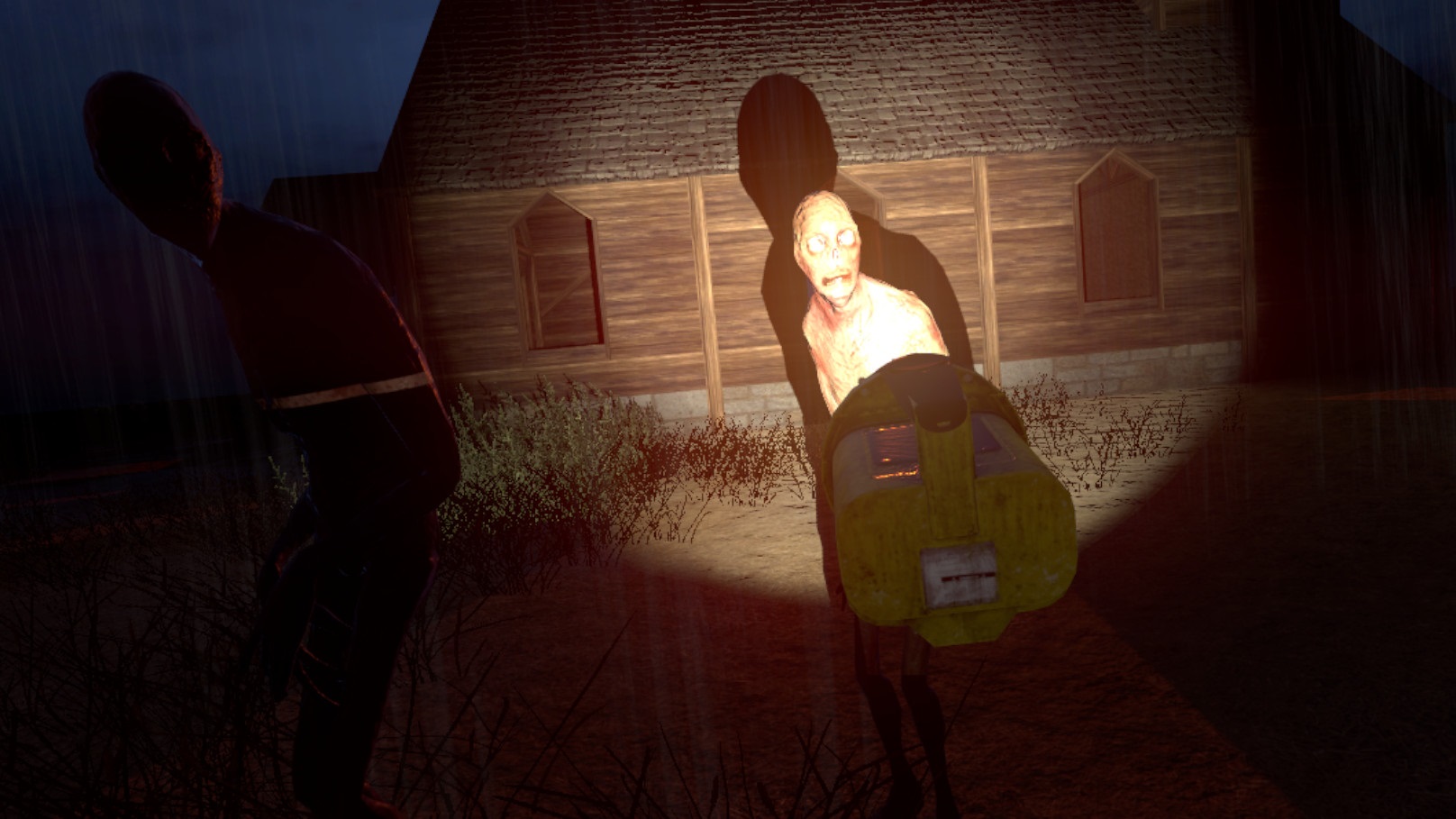 Though, based on how shadows are shown, maybe this takes place on an a distant world where light and gravity behave in a fashion unknown to all existing science.

Eventually, I came to a campsite. Brown, cylindrical lines that were intended to be logs gave off a two dimensional flame, casting what was supposed to be a baleful glow across the site. Another recording announced that, holy crap, there be monsters in these here parts. On predictable cue, a horrible cropped and artifacted “shriek” sounded from, apparently, everywhere. Searching for the source, it was found to the right. So, positional audio is right out. I didn’t care, though. This thing was hilarious.

Imagine a swamp monster with its gills sandblasted off and wearing a skin tight body condom. This was the beast loping amiably towards me, floating inches off the ground. The infamous Aliens: Colonial Marines “Derpy Alien” had nothing on this guy. The creature lumbered over as I let loose a peal of laughter. (Wife: it was more than a peal. Several peals.) After a couple of halfhearted swipes, it turned and left, casting an embarrassed glance over its shoulder, as though it felt a true sense of shame for existing. Maybe I’m selling the developer short. It’s possible that the game picked up my laughter from the Vive’s built in microphone, and had the monster react accordingly. Either way, ha. Well, more like haha. There was a brief pang of guilt. If I am to be tolerant, accepting, or even supportive of myriad lifestyles, handicaps, creeds, races, and gender fluidity, that same attitude should transfer to however this thing self identifies. 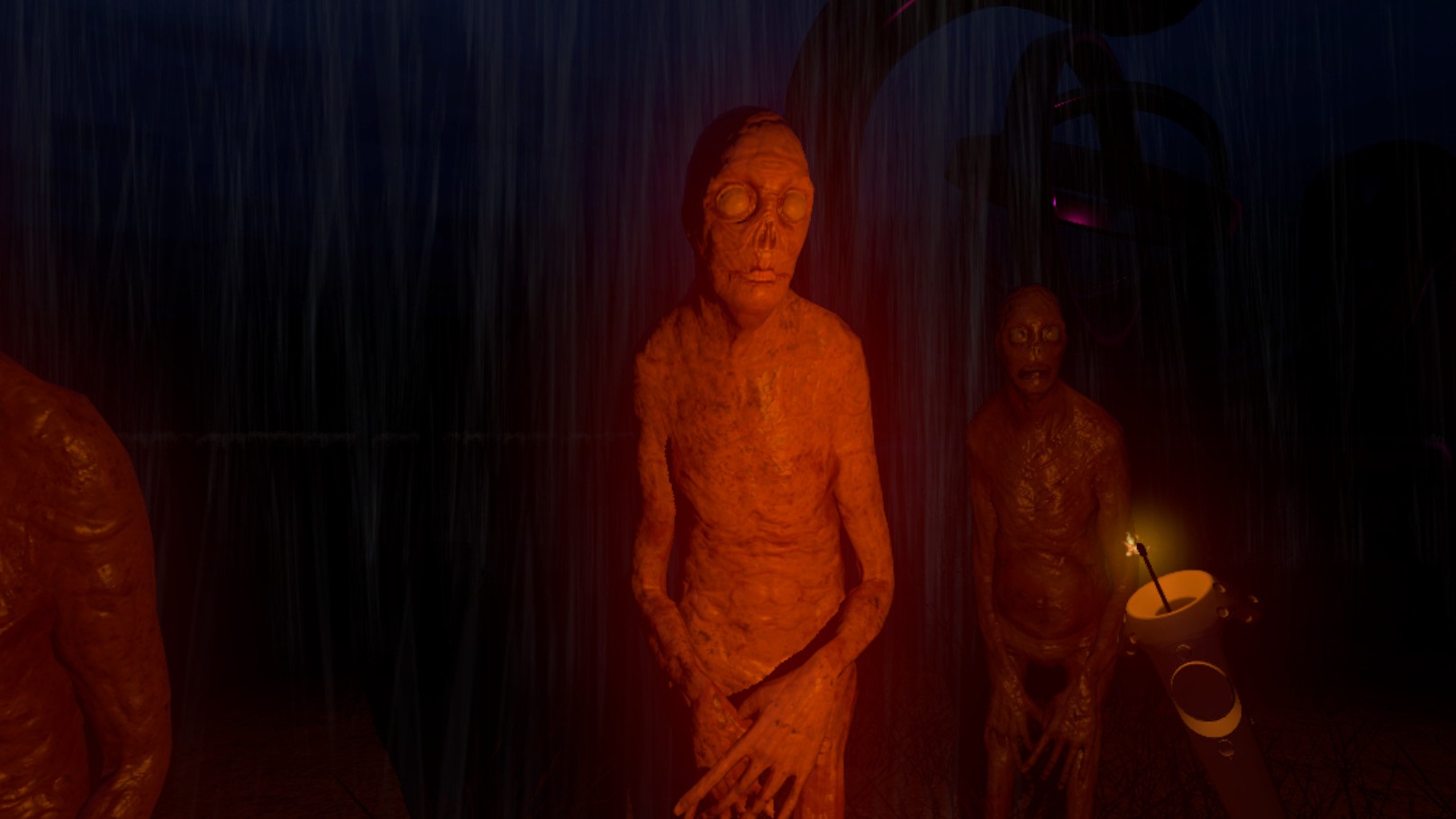 They do look awfully sad and vulnerable…

Now, I have reviewed some stinkers in my time. Eviscerating a title for poor quality is good sport and serves a purpose, however small it might be. Even with this perspective, I was done with Grave VR. Removing the headset, I announced to the wife that life is just too short for this. Other games that have received my ire at least had the skeleton of a good idea. Some talent, however mismanaged, was present. This, though, is either the product of lack of knowledge or lack of care. Either way, it’s terrible and undeserving of a contemplative review. It is only out of a sense of duty that this very post is being written.

So, it must be said again: life is too short for Grave VR. The time spent here could be better used in other, more sensible activities, such as seeing how close one can hold their hand to the maw of an active wood chipper before the teeth catch the appendage and pull it in. At least there is knowledge to be gained from such an endeavor.