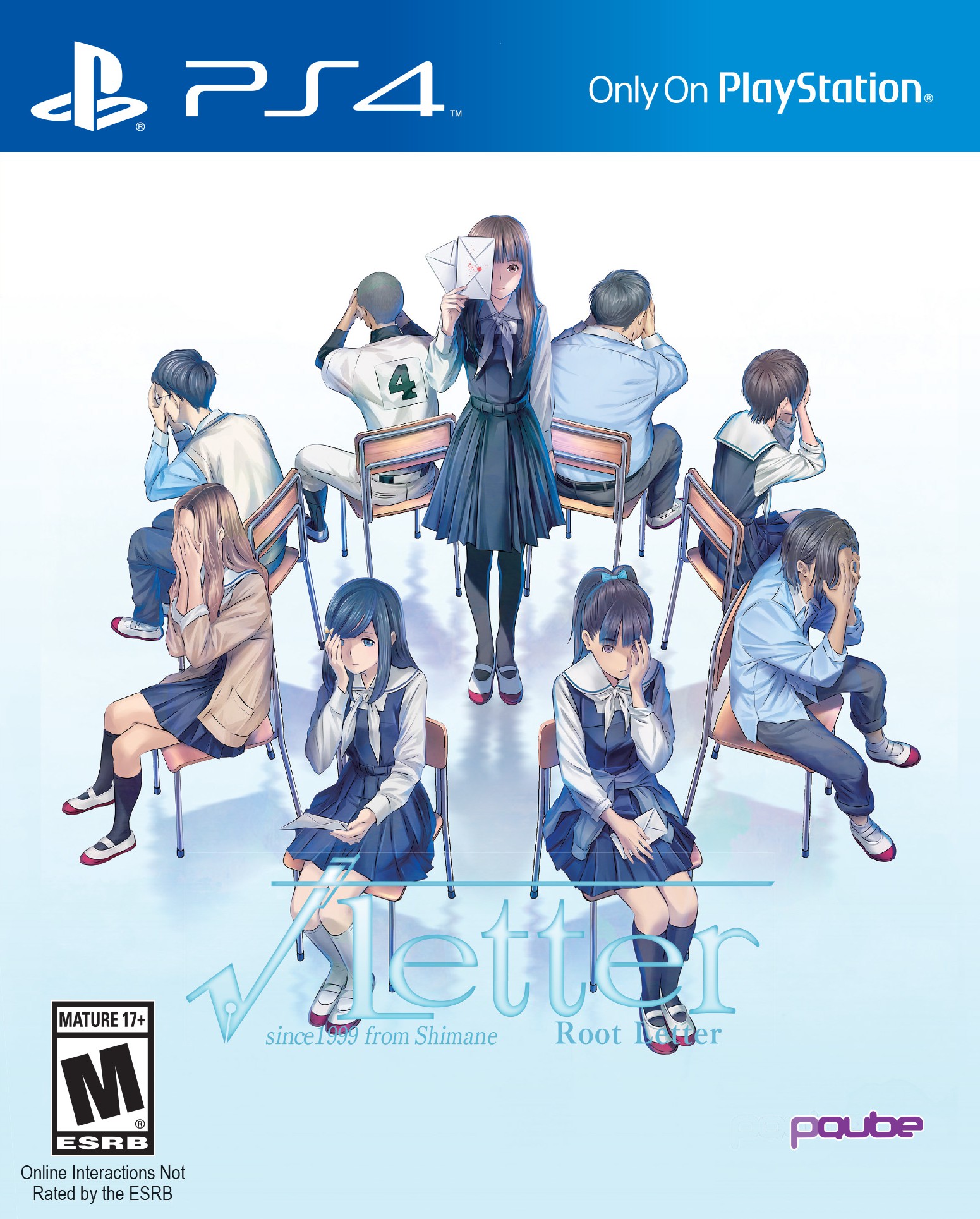 Once upon a time, Konami was a company loved worldwide. Japanese audiences were treated to a series of titles which English-speakers never received: Love Plus. This dating sim/visual novel series was hugely popular for years. Eventually, key staff from Konami’s Love Plus team moved over to developer Kadokawa Games. They’re now providing aid to the new “Kadokawa Game Mystery” series of visual novels. The first in this recently-established series is Root Letter. Don’t go in expecting a simple romantic tale, because that’s the exact opposite of what’s going on within this game. Instead, it’s a mystery tale set in the very real setting of Shimane Prefecture in Japan.

Root Letter begins unfurling its mystery immediately. Protagonist Takayuki is simply looking around his room when he suddenly discovers a letter amongst everything else. This immediately brings back memories of fifteen years ago when he had a pen pal named Aya Fumino in high school. The two were only able to exchange ten letters before she spontaneously stopped writing back. As a teenager who had begun to fall for his pen pal, it was definitely a distressing moment. So why then does he now see an eleventh letter from Aya? This letter is incredibly brief when compared to the rest. According to the letter, Aya confesses to murder and therefore can never talk to Takayuki again. Incredibly confused and concerned by this revelation, he decides to head to Shimane (where Aya lived back in high school) to uncover what on Earth happened.

Unfortunately, his first and most obvious step of going to the address on her letters doesn’t work out. Upon reaching the location he finds nothing but an empty field. The helpful locals let him know that the Fumino household once resided there, but was destroyed in a fire years ago. There is one more way Takayuki has to discover the whereabouts of his old pen pal. Many of the letters she wrote to him describe Aya’s friend circle. They’re only referred to by weirdly stereotypical nicknames like “bitch” and “four-eyes.” Even so, there’s enough context clues provided to hone in on this small group of people who graduated Matsue High School in the proper year and were in Aya’s class. 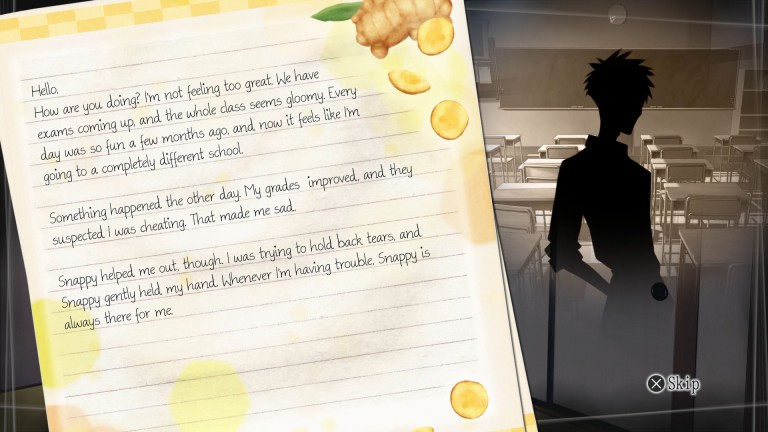 It’s an intriguing little setup, but one that does not fully prepare players for what a strange, sometimes goofy game it ends up being. Right off the bat, nobody wants to talk about Aya aside from suggesting she died 25 years ago. This of course makes no sense given your apparent pen pal friendship just fifteen years ago. Others want to chalk the situation all up to ghosts or aliens. Takayuki isn’t the kind of guy to quit in the face of adversity. In fact, he earned the nickname “Max” because he’s always giving everything the maximum effort possible. This isn’t a typical visual novel protagonist with little personality who strangely still manages to attract women. Instead, Takayuki is weird, incredibly strong-willed, and often detested by locals due to his overly inquisitive nature.

If there’s one thing Root Letter does extremely well it is its ability to focus a storyline on adults with distinct personalities. With characters in their thirties, it would make little sense to model them after the standard tropes of high school-based stories. While they may have been less interesting back at Matsue High School, they’ve grown into unique people with stories to tell. It may take more than one playthrough to truly come to grips with the cast and why they’re initially so unwilling to tell anything to Takayuki. Even when characters do speak up, they sometimes come across as eccentric due to the writing rather than the situation. Some players eventually ease into the unusual writing style, but others may simply be put off. 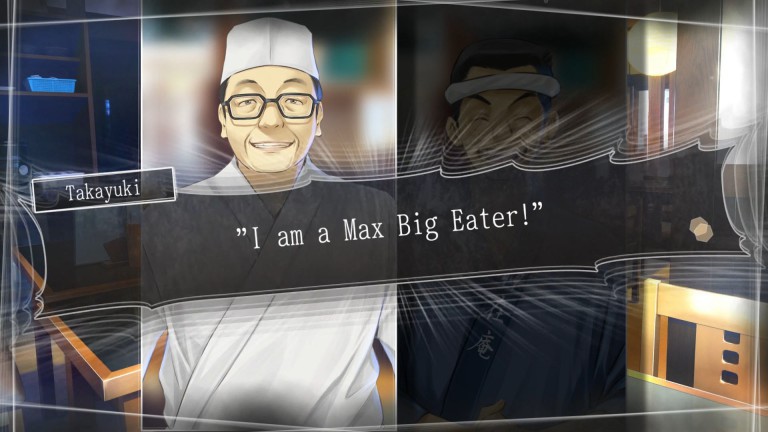 This visual novel feels extremely weird in comparison to others. Maybe that’s due to how it subverts expectations. Players go in expecting a “mystery” tale and, while they get that, they also receive a heavy dose of humor. It’s not laugh out loud funny like the Phoenix Wright games, nor does it seem to be trying too hard. The humor comes from the difference between supposedly mature characters and their often ridiculous actions. One of the silliest is when Takayuki enters a special minigame mode that tasks players with selecting the correct sentence to shout at someone. This comes at the tail end of an investigation mode which plays out with players selecting the proper dialogue or objects to break through their reticence to share the truth.

The biggest hindrance to the game is that completing it will take longer than should be necessary. Although a first playthrough takes around seven to ten hours, there’s no incredibly easy way to rush through again and grab another ending. Root Letter has tons of player interaction (switching between locations, choosing dialogue options, etc) which means hitting the skip text option isn’t enough. On the plus side, Root Letter is incredibly easy. Not only does the storyline flow such that you can typically tell where to go next, there is also a hint function. Clicking it usually gives an explicit indication of what the player’s next move should be. The soundtrack and gorgeous visuals (both for sprites and backdrops) help make return visits to the town bearable, at least. 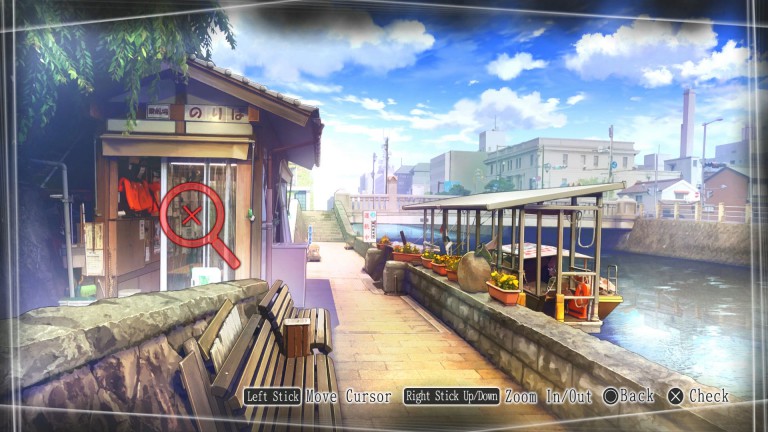 Root Letter is a strange visual novel, but one that keeps players interested throughout. If you feel you’ve received a rather lackluster ending then that’s cause to play through four more times to uncover the final truth. Unfortunately, the game doesn’t make expedite subsequent playthroughs. Still, there is a lot to like about a visual novel focused on the lives of thirty somethings rather than samey love-struck teenagers. Hopefully future games in the Kadokawa Game Mystery series improve upon this first one. While worthwhile from a story standpoint, there is still more that could be done to improve playability.