Following on from an FTC (Federal Trade Commission) case this summer involving Warner Bros. and certain content creators — over the allegations of failing to disclose whether relationships between the publisher and users was financially backed — EA have moved to ensure that the same mistake doesn’t happen again (or at least doesn’t result in the company making a trip to the courts themselves). According to EA’s German blog, anyone who goes into partnership with the publisher — be it with the intent to promote a game or provide any other means of coverage — will be required to include designated terms (hash-tags in the case of Twitter) and/or embed particular watermarks in videos. Below are two example watermarks. 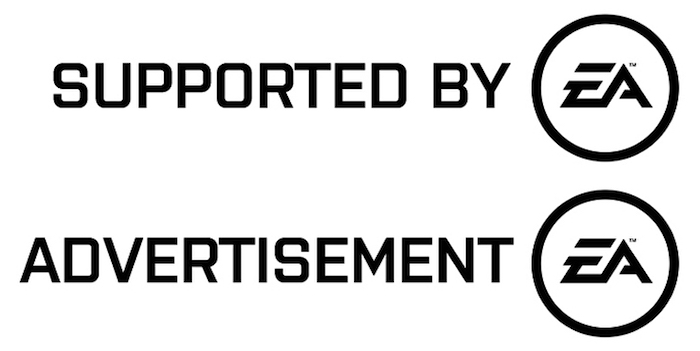 Hashtags that must be used for social media will either be #supportedbyEA or #advertisement. The former will be to indicate, in the example of press events, that that creator has been given privileged access and/or has had travel expenses covered by the company, for example. The latter will be to indicate to users that EA have actually offered financial incentive for promotion of their material and that a user has been paid to specifically talk about said product.

It’s hopefully the next step in what has quickly become a grey and rather murky culture of moral or otherwise immoral decision-making (to say the least) by select — and hopefully a minor — section of the gaming community as a whole. In what is a rapidly changing, if not evolving, landscape in video games media — for both traditional press and content creators alike — here’s hoping this means users/readers will be kept firmly in the loop as to the distinction between honest opinion and marketing. Greater ethics will only do us all good.