Certain video games can cause me to think that the time I spent learning our numerical system in school was a colossal waste of time. Contra was a popular series during the 8-bit and 16-bit era, and this popularity was well deserved as these games were always such a great time, especially if you had a buddy to join you in shooting up aliens back in the days when couch co-op was the only option. Contra 4 is the eleventh Contra game, and while that probably sounds odd to anyone who understands how numbers work, it makes sense we examine the ten prior Contra games leading up to it.

The NES had 8-bit ports of the arcade games Contra and Super Contra, which was retitled as Super C which was likely done to avoid association with the Iran Contra affair. These games were two player run and gun action, and among the best example of what you could get in this genre at the time. The SNES got Contra III: The Alien Wars (which is the real fourth Contra game, following Operation C on the Game Boy) used the earlier games and improved everything about them while also introducing the ability to dual wield gun. The visuals, soundtrack, enemy design, and game play were just exponentially better than the NES games while maintaining everything that made those earlier games so great. Contra Force and Contra: Hard Corps were 2D Contra titles that followed Contra III, but they failed to surpass the greatness that was displayed in The Alien Wars.

Then Congress went and passed that law that required every successful video game franchise that flourished in 2D be introduced to this newfangled 3D gaming nonsense. Some adapted well to this new third dimension, Contra did not and the PlayStation received two Contra titles that were pretty abysmal. Contra: Shattered Soldier was a return to 2D run and gun action in the PlayStation 2 that was a decent game but failed to recapture the greatness the series once enjoyed. Neo Contra went to an all overhead level format, which overhead levels have existed in classic Contra games but they were just there to add variety, the platforming levels were the meat and potatoes of those games so Neo Contra was just kind of weird and forgettable, but points for at least trying something new. Those last two games were not bad, they just failed to live up to the expectations set by the earlier Contras. 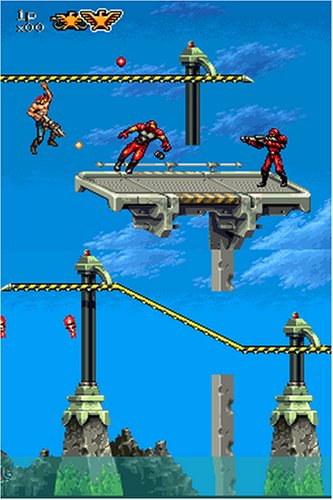 Going through all that, the title Contra 4 makes sense, despite the mixing of Arabic and Roman numerals. Contra 4 is a return to form from Contra III. The 3D models inside the 2D gameplay introduced in Shattered Soldier had been abandoned in favor of returning to sprites of the earlier Contras, which are even in the same artistic style as Contra III. The gameplay borrowed heavily from its SNES predecessor, including the ability to carry two weapons that can be switched on the fly. Similar environments also returned to Contra 4, like the bars the players would hang from and swing across like they were monkey bars to traverse areas where there is no ground, all while still having to shoot the endless supply of alien attackers. It even features a couple behind the back tunnel levels similar to the Base levels of the original Contra.

Contra 4 takes place in the year 2638, two years after the end of Contra III. Red Falcon is still dead because that’s kind of how death works but a new alien force calling themselves Black Viper has decided that they think they can succeed where Red Falcon failed. The four Contra commandos, Bill Rizer, Lance Bean, Mad Dog, and Scorpion, are sent to Galuga archipelago to defeat this new foe, which is the setting of the original Contra. In the original Contra, the Japanese version had Bill and Lance while the American counterparts were Made Dog and Scorpio, with later Contras having them Bill aka Mad Dog and Lance aka Scorpion. Why they are four different people in this game isn’t something I can explain but when you look at the canonical timeline of Contra it gets pretty jumbled up with all the sequels. A deep, nuanced narrative with rich character development isn’t why people play these games anyway, it’s all about the carnage and fast paced action. 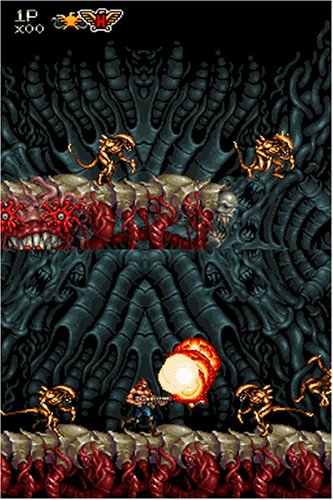 Greatness in simplicity has always been a strength of Contra, and ever since Castlevania: Dawn of Sorrow I always get filled with a little bit of dread whenever a game that only really needs one screen gets released on the DS. So fearing I would have to use Morse code to tap out airstrikes with the stylus or write out terms of surrender after shooting a boss monster to death, I was pleasantly surprised to find the extra screen is just more of the game. The levels have a greater vertical scope, and the player can travel between both screens with the aid of a grappling hook.

Contra 4 was released in 2007 which was the 20th anniversary of Contra, and as people tend to get sentimental at anniversaries a museum was included in this game where various bonuses can be unlocked through completing challenges in the game. Like most museums of this sort, most of the unlockables are interesting but not too significant except for the original Contra and Super C. You have to beat the arcade mode of Contra 4 to unlock challenge mode before you can get the NES games. This is not as easy as it sounds, since Contra 4 has maintained the difficulty the series is known for. It’s not quite as unforgiving as Shattered Soldier, but completing this game without using the 34 life cheat is not an easy task. 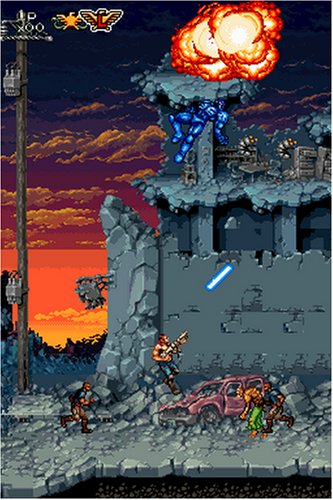 After a few missteps in the series, Contra 4 was a welcome return to style of the earlier games with just enough modern updates to make it not feel like a simple rehash. Games have come a long way since the original Contra came out in 1987, many of which now have stories and voice acting that rival Hollywood blockbusters and may require a lengthy tutorial just to explain what all the buttons do. A lot of those games are fantastic and several personal favorites fit into that category, but Contra 4 shows us that even with all the advancements that have been made in gaming, there is still something to be said for the simple pleasures to be found in just turning a game and the only thing to worry about is not being killed while running, jumping and shooting, no explanation or tutorial needed. Contra 4 is one of the best Contra games and also one of the best games to be released on the Nintendo DS.