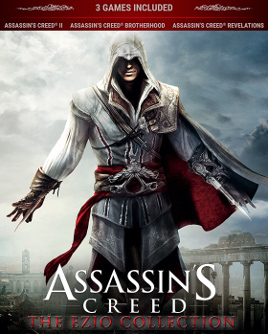 Consistently pumping out quality titles in a series over the better part of the decade tends to make a franchise follow one of two paths that mirror the career of some moderately successful music acts: the path of Metallica or the path or Megadeth. Both paths begin with an impressive debut, but over time they either change so drastically they alienate the early supporters or they stick to familiar ground, and while that latter choice may not chase away fans the way the former does, the newer efforts no longer generate the same level of excitement they once did. The newer entries in the Assassin’s Creed main series have been successful both critically and commercially, but did not pack the same wow factor when the series was new to the world. This will be the first year since the series debut there will not be a new entry in the main series, but we will see remastered versions of what is considered by many to be the best character arc in the form of Assassin’s Creed: The Ezio Collection.

Assassin’s Creed II is considered to be one of the best entries in the franchise. For the uninitiated, Assassin’s Creed II begins in the 21st century centering on a man named Desmond Miles. There has been conflict between the Templars and Assassins for centuries in a world with an alternate version of historical events. Using a device called the Animus, Desmond relives the genetic memories of his ancestor Ezio Auditore da Firenze in 15th century Italy. Ezio’s story begins as him as a young man who knows nothing of his father’s involvement with the Assassins until after he is done completing some mundane errands for family members and villagers. After a rather unfortunate turn events, he learns about a secret his father has kept from him. Ezio is already a competent combatant, but he meets someone who is able to train him to blend in with a crowd and stealthily move about the city: he already knows how to kill, but these are the necessary skills he needs to survive. Vengeance against those who have brought harm to his family is Ezio’s motivation as he travels through a beautiful rendering of Italy during the Renaissance, and while Ezio does this Desmond begins to unravel mysteries of the past that can help him bring an end to the conflict between the Assassins and Templars. Ezio’s travels take him to places like Venice, Tuscany, and Florence over the course of several years and brings him in contact with historical figures such as Leonardo da Vinci and Niccolò Machiavelli. 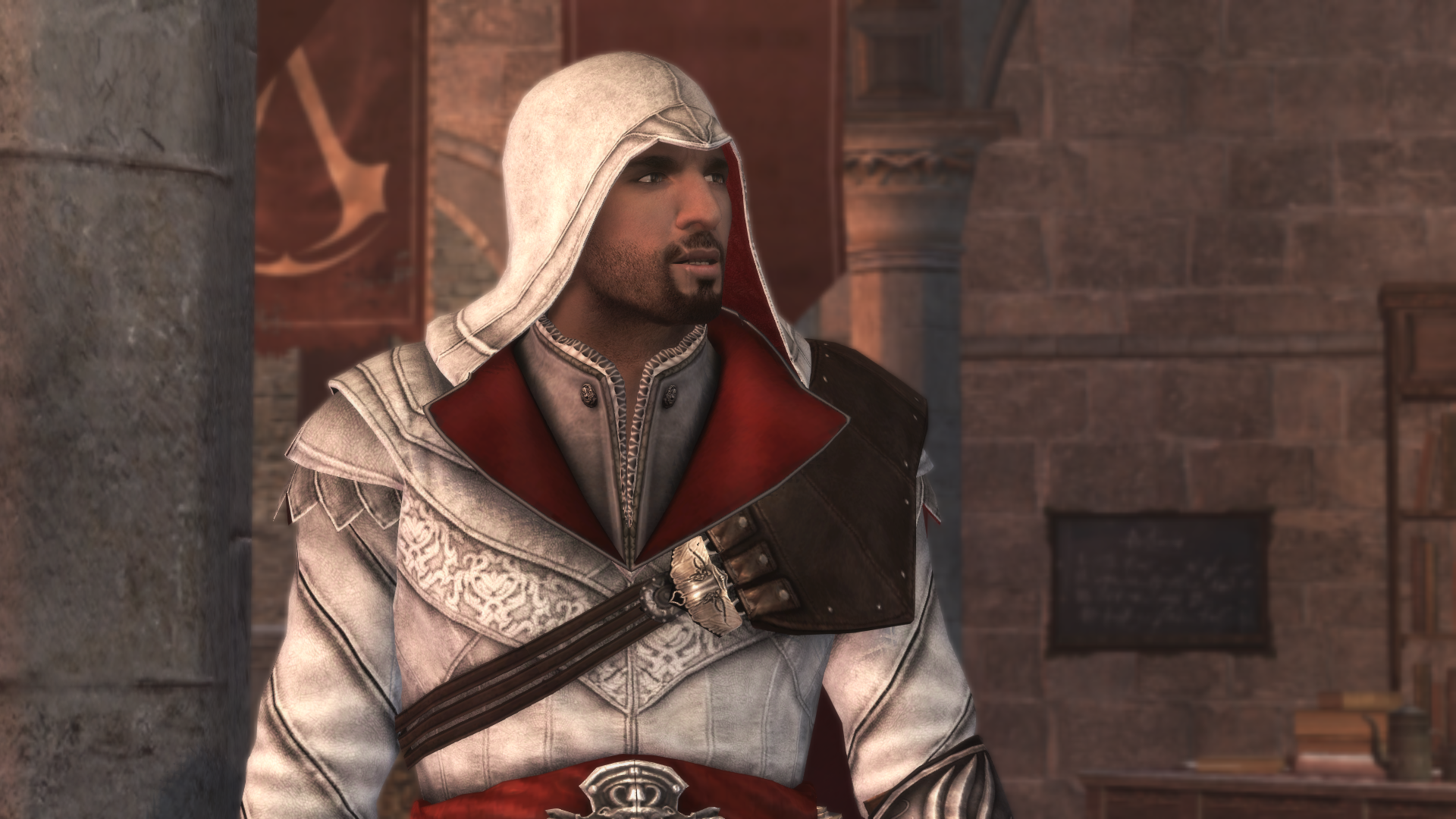 Assassin’s Creed Brotherhood takes place immediately after the events of Assassin’s Creed II, with Desmond still using the Animus to relive his ancestor’s memories, this time Ezio’s portion begins at the turn of the century in 1499 going toe to toe with the Borgia who has a stranglehold on the papacy. The mix of stealth and action that made Ezio’s first game so great is present with a couple new additions to formula. Ezio is able to recruit people to work under him by destroying any of the Borgia towers and freeing citizen from the tyranny of the guards. These newly recruited allies can be called upon to assist Ezio, or he may give them assignments to take care of for him. Combat has been overhauled to allow more aggressive enemy AI, but to balance this Ezio has honed his combat skills as well and can use melee and ranged weapons at the same time. Additionally, horses can play a role in combat, allowing Ezio to use ranged weapons from the safety of horseback and carryout some acrobatic equestrian assassinations. Like a Renaissance era James Bond, Ezio has some state of the art high tech gadgets from his inventor buddy Leonardo da Vinci such as a parachute.

Assassin’s Creed Revelations continues the saga or Ezio and Desmond but also brings back a character long time fans will recognize by the name of Altaïr Ibn-La’Ahad. This title, while still very good, does not quite reach the lofty heights set by its predecessors. Linking the events of Assassin’s Creed which took place in a different location a couple centuries earlier is an interesting crossover idea but still seems a bit shark jumping in nature, though I suppose it really isn’t that odd considering the whole Animus and genetic memory plot to begin with. Ezio is getting up there in age by the time we get to Revelations, but with birthdays come presents and his newest toy is a hookblade, which is basically a grappling hook allowing him to zipline across town and do his best Scorpion “Get over here!” impression in combat. Stepping out of Ezio’s shoes we can take control of Desmond (yay) and do some first person platforming missions that seem a bit out of place. The next progression of the destruction of the Borgia towers introduced in Brotherhood is that Ezio can capture districts. After capturing the districts the Borgia may decide they want to take them back, at which time this can open up a tower defense minigame called Den Defense. Whether or not this addition is a good or bad thing depends on how you feel about tower defense games, but this is at least done in a manner that makes sense in the context of the rest of the game. Looking beyond the unusual additions in the trilogy’s finale, the building scaling, roof running, stealth killing, and rubbing elbows with some historical figures while trying to kill others is still present. 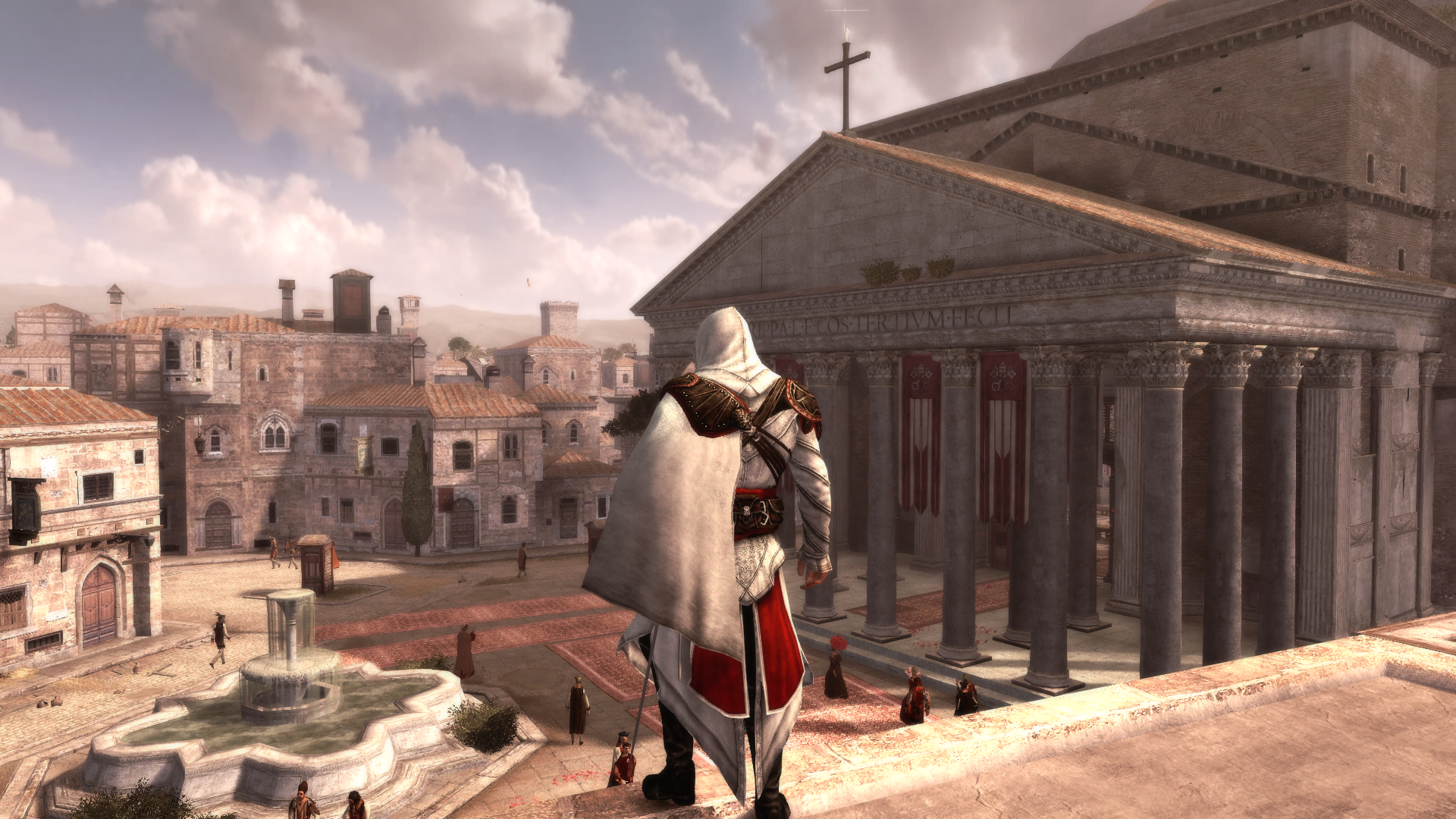 Assassin’s Creed Lineage is a short film that runs a bit over a half hour that is a prequel to Assassin’s Creed II. The star of this story is Ezio’s father, Giovanni Auditore, and it explores his exploits as an assassin and fleshes out his backstory. Assassin’s Creed Embers, clocking in at a little over twenty minutes, takes place after the end of Assassin’s Creed Revelations, where Ezio is no longer actively living the life of an assassin and enjoying life in a vineyard. A stranger comes to Ezio seeking aid and drags him out of retirement for one last hurrah. Neither of these shorts are spectacular, but they are nice bonuses to be included with the collective and serve as cinematic bookends for Ezio’s trilogy.

The three games in this collection weave their stories together to create a very well developed saga about a fictional character inserted into a very interesting historical time. While all interactions are dramatized, the use of the fictional narrative inserted into a creative take on history does make for one of the more interesting stories to be found in gaming. The amount of vertical traveling up buildings does add a fun component to racing through town, avoid pursuers, or finding vantage points. Each of the games have some differences to keep them from being too cookie cutter, but the main aspects that make them great are consistent across the three titles. Even though the graphics make it obvious these were last gen games the touch ups they were given ensure that even though they may show their age they still look damn good. It should be noted that while some of these games did originally have a multiplayer component, this current gen remaster is a completely solo affair. All of the single player additional content is included, but all multiplayer aspects have been removed. Personally, the main attraction of these games are the single player experience including the complex story with the multiplayer component seeming like an afterthought, so the absence of multiplayer isn’t really a deal breaker. 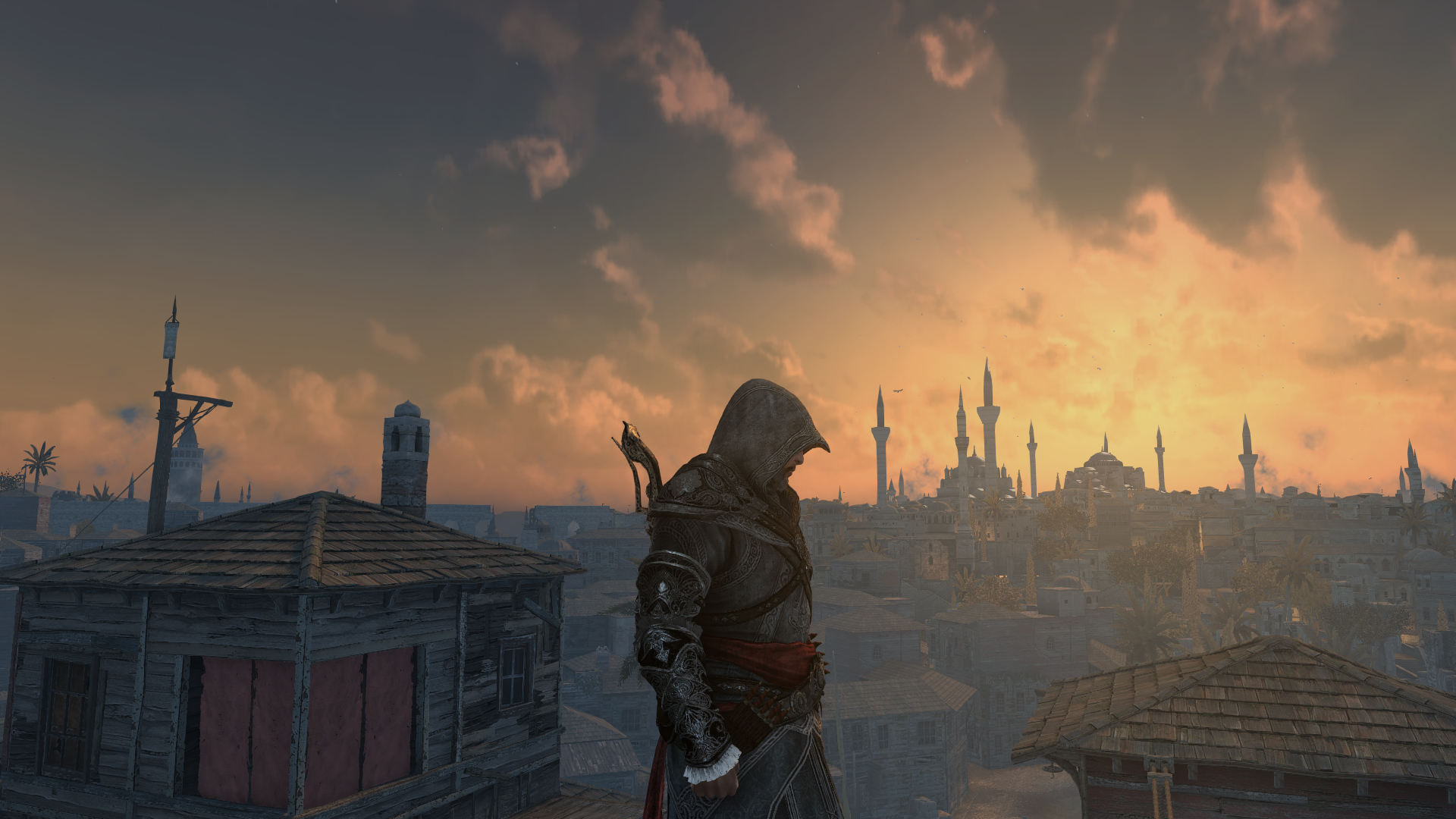 Assassin’s Creed: The Ezio Collection assembles the complete exploits of what many consider to be the best character in Assassin’s Creed franchise. The improvements to the visuals are minor, but the gameplay and story that earned these games such praise when they were first released are just as enjoyable today as they ever were. Ezio’s trilogy has been previously released, but the inclusion of the two short movies and all single player add-on content makes this the definitive collection, though the concession of losing all multiplayer aspects may disappoint some players. With so many Assassin’s Creed games being released, the franchise has lost some its luster in recent years, but this collection is a great way to remember how this series became as popular as it did in the first place. This is also highly recommended as a good starting point for people who have been interested in Assassin’s Creed but haven’t got around to actually playing any of the games, as well as anyone who wants to revisit Ezio’s saga.