Star Wars: The Old Republic hasn’t always been so confident with its identity. Back in December of 2011, BioWare Austin had just released what many had hoped would be the juggernaut to finally topple World of Warcraft’s stalwart grasp as the leading triple-A MMO theme park. The combination of BioWare storytelling and the Star Wars IP had already proven to be a critical and commercial success with Knights of the Old Republic. Expectations for fans and publisher Electronic Arts were through the roof. Spectacular Star Wars trailers fueled the hype as the release date finally hit, and like many massively multiplayer hopefuls, queue times for playing the game were upwards of three hours.

Players were eager to try something new and SWTOR quickly became the fastest-selling MMO in history by amassing over one million subscriptions in its first week. It was a humbling experience for Bioware and a dream come true for many, but like every online game, the community eventually settled. Subs dropped and updates couldn’t match the cadence gamers had come to expect. The Old Republic initially reviewed well, but aside from cinematic fully-voiced cutscenes, it didn’t stray too far from the Warcraft formula. 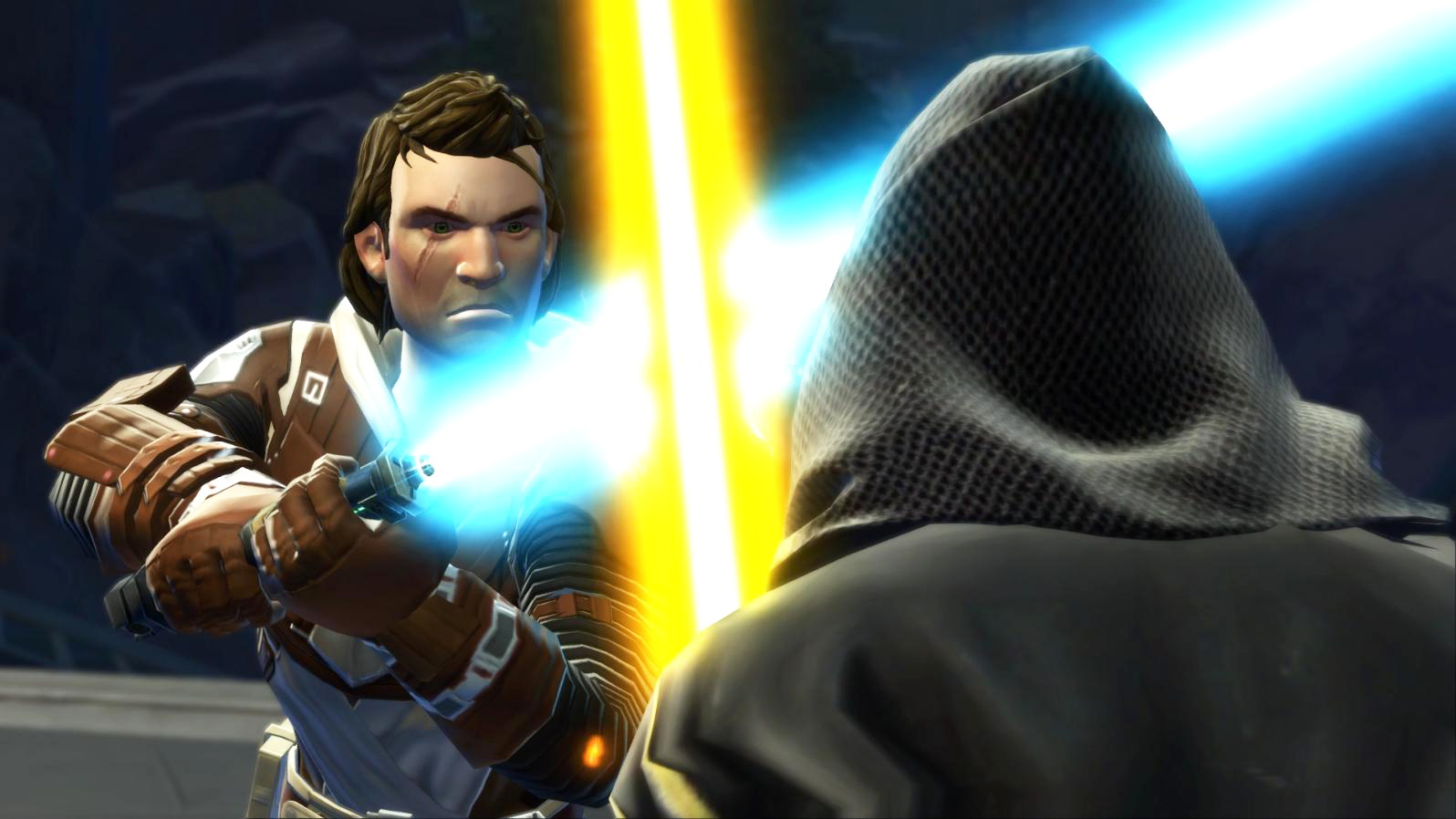 Fast forward to now and The Old Republic is moving into its sixth expansion after releasing its most successful one to date in Knights of the Fallen Empire. BioWare has taken feedback from players and even lost a few as they’ve doubled down on their new identity. You can see the confidence in their latest expansion and you can hear it from the developers when they talk about the future. Knights of the Eternal Throne aims to be Star Wars massively multiplayer gaming at its most confident, finally reaching the heights set so many years ago.

Knights of the Eternal Throne, or KotET for short, is the culmination of doing what worked then even better now. It represents what SWTOR is at its core: a story-driven cinematic experience where you get to live your Star Wars fantasy and decide the fate of the galaxy. There isn’t a new raid coming with this update; SWTOR isn’t raid focused and probably never will be. It’s also not the second coming of MMO sandbox GOAT Star Wars: Galaxies. After playing through the previous expansion and the first chapter of KotET, it’s clear that while these audiences are still appreciated, the major pillar moving forward is fantastic story-driven narratives where choices matter.

KotET starts off right where the previous expansion ended. It’s reminiscent of Netflix originals as the entire story can be consumed in story beats each lasting around an hour or two. This is a noticeable difference from the previous expansion’s sixteen chapters which were spread out over an entire year. Feedback told BioWare that bingeing the story was something players wanted for the future and in response Knights of the Eternal Throne will launch with nine action-packed new chapters promising a conclusion to the Eternal Empire saga. They aren’t being coy about the final outcome either. You’re on a mission to conquer the Eternal Throne and rule the galaxy with an iron fist or a benefactor’s will. 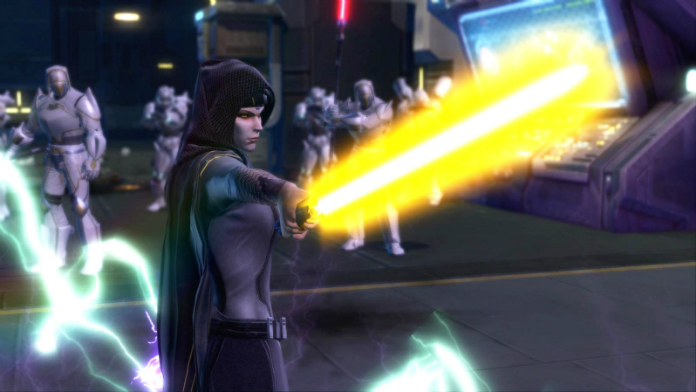 BioWare DNA is immediately apparent in the first chapter of Knights of the Eternal Throne. With one of the most resounding flourishes felt since this saga kicked off, you must choose to hold a grudge or side with an integral member of your alliance shortly after landing on Voss. The decision will leave your playthrough on standby as you ponder the potential repercussions, but in the end you might assume the outcome doesn’t diverge much. It’s a story inside an MMO after all. How much can really differ when moving towards a similar conclusion? It wouldn’t be fair if this decision plays out like it’s foreshadowing suggests, so surely they’ll converge at some point? Had it not been a public preview event, I might’ve went about my merry way assuming everyone else’s playthrough ended the same as mine, but that’s not the case this time around. Within the first hour you’ll make a gripping choice that drastically changes the story. Characters that held critical roles in the previous expansion’s arc may never follow you into battle again. If this is how Knights of the Eternal Throne starts, then we might be getting one of the most exciting Star Wars stories of any medium come launch.

It’s weird to watch this game we’ve been playing since 2011 come full circle. Veterans will remember times when the horizon shown more dark than light side and criticisms from the community were at an all time high. There were simply too many requests and not enough resources. People wanted more raids, PvP maps, character exclusive stories and general Star Wars fantasies realized such as being able to pilot your own customizable ship or building a Jedi Academy to train your companions. Many of these had their time in the sun, but last year was almost completely dedicated to epic character arcs within a branching storyline. The Old Republic has undoubtedly done story well yet many of the other MMO bits are rife with debate on whether they live up to industry standards. Knights of the Eternal Throne isn’t trying to win your heart by checking all the boxes. It’s trying to win you over by reminding you how much you’ve invested in your personal adventure and all the relationships you’ve forged along the way. 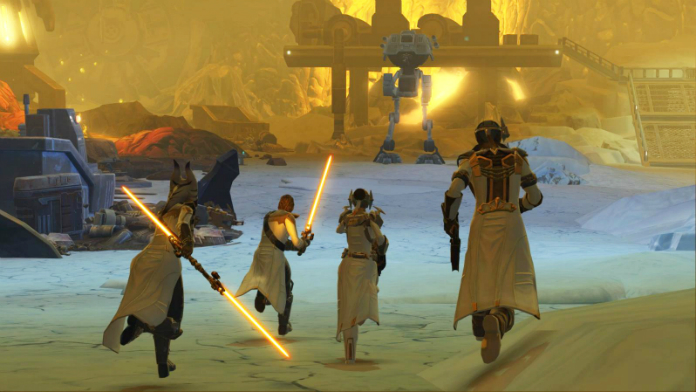 In Knights of the Eternal Throne, BioWare has also embraced the way many massively multiplayer role-playing gamers move through virtual worlds. Ten years ago it was nearly impossible to progress in story or end-game without joining a guild and downing bosses that took hours to defeat in hopes you got the item you were looking for. There are still games that require that continuous time commitment. If that’s what you want, it’s still available in The Old Republic, but pivoting on that design and adjusting to how current players move through the galaxy is the brand new Galactic Command system. It’ll still reward players appropriately for grouping to take down the galaxy’s most challenging content, but if you’re a solo player you also have the capability to reach your maximum potential. There’s no longer a soft cap that forces you to join a guild once you finish the story. If you want to play mostly by yourself then KotET says go ahead.

Galactic Command aims to reward players for everything they do in game. Raids will still be the source of the most experience but Revan will no longer be the gatekeeper to the game’s best in slot equipment. PvP enough and you’ll eventually land yourself a full set of bonus imbued gear. If all you want to do is replay the story missions at increasing difficulty levels KotET allows that. All activities in game not only award level experience, but also Galactic Command Experience. When you earn enough to increase your Galactic Command Rank you’ll get to open a Command Crate which will be instantly recognizable to anyone versed in The Old Republic’s Cartel Market. Here is where you’ll roll for decorations, reputation boosters, cosmetic items and the best gear this side of the Hutt Cartel. 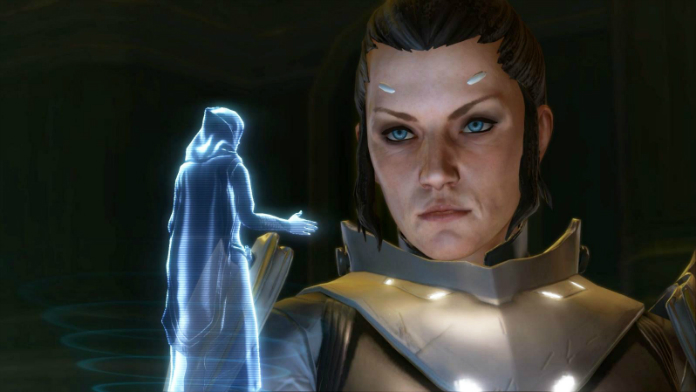 Replacing new raid content in this expansion are Uprisings. These four player fast-paced dungeons will throw you right into the action. They’re less about story and more about feeling heroic. There will be two difficulty modes at launch, but come January, Uprisings will be home to the most challenging content The Old Republic has ever seen.

These aren’t the only additions beyond story that Knights of the Eternal Throne will bring, but it goes to show that instead of trying to compete in areas like PvP or raids, BioWare has chosen to embrace what they’ve always done best. They’re not self-conscious about the features in game not receiving substantial updates. They are outwardly excited about showing fans a new story with meaningful choices that they have been building for years.  Those looking for large group content will need to be patient a little longer, but for those wanting to live their own heroic journey in the Star Wars universe, Knights of the Eternal Throne is where you’ll want to call home.

Star Wars: The Old Republic – Knights of the Eternal Throne launches on December 2, 2016 for PC. May the force be with you.