Few games in history have ever disappointed me quite as much as Bioshock Infinite. Despite the fact that it made money, won numerous awards, and was generally well-received by critics and audiences alike, there was always a sense that the developers never entirely nailed it. This game was supposed to be a labor of love that exuded the same care and energy that the developers had poured into the original Bioshock. The fact that they had the freedom and resources to make such an unusual, stimulating game at all was a good sign. But it’s the kind of game that makes you want to play the original Bioshock again instead of the newer version.

Unlike a lot of the nostalgic properties from previous generations, the first Bioshock has held up increasingly well. It’s still so clever, inventive, and unapologetically offbeat and weird. Here was a game that took some familiar elements — such as violence, horror, surrealism, and black humor — and presented them in such an original manner that it looked, played, and felt like nothing that any developer had ever made before. It also featured the most memorable setting in any videogame ever — the Art Deco-inspired world of Rapture, with its mythical skyscrapers, smoke-filled dens, neon signs, deserted streets, and moody, murky shadows. Infinite thus faced an impossible task: it tried to pay homage to the original with similar themes and ideas but also carve out its own identity at the same time. At this lofty goal the game did not entirely succeed. Still, I thought they could pull something off — not a game that would please the hardcore fans, but at least a game that could stand on its own merits. 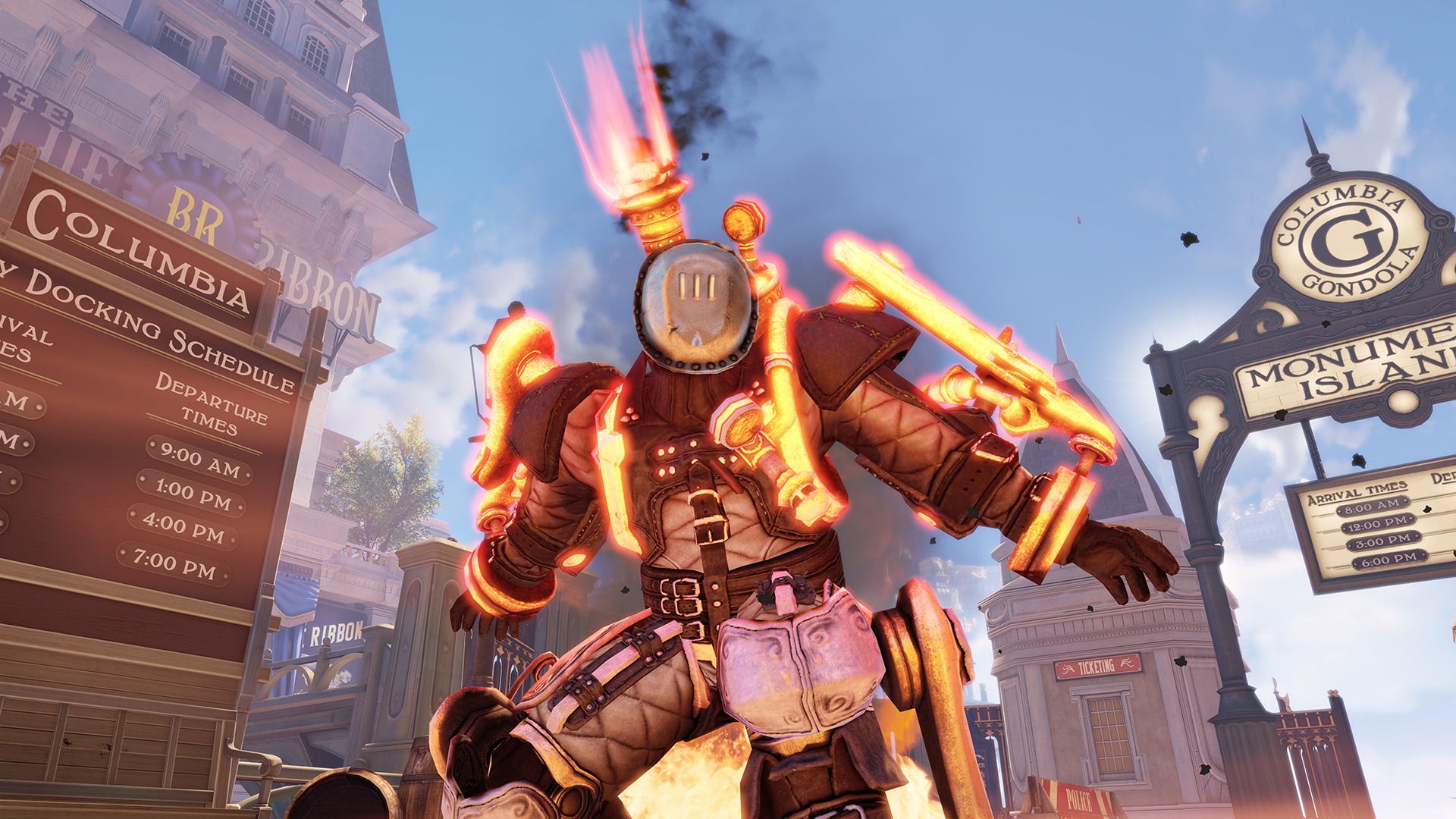 That makes its failure all the more depressing — especially when you consider the fact that this is the same creative studio that made System Shock 2 and the first Bioshock. Perhaps the developers were afraid of taking risks that might alienate or bore their audience. Or maybe something critical was lost during the game’s long and troubled development process. Either way, not only was the game less revolutionary than advertised, but the developers also gutted all the clever design choices that made the original Bioshock great. They had turned the game into an uninspired cover shooter without the vision to connect any of its new ideas together.

What I enjoyed most about Bioshock Infinite was actually the quiet, understated moments when I was left alone to explore the city of Columbia. If the whole game had the discipline to stick with that, we might have had a classic here. Instead, the plot frantically zips along, occasionally seizing a flicker of purpose but then getting distracted and bogged down by the next blow out set piece or action sequence. That lack of focus ultimately gives Bioshock Infinite a sense of emptiness. As it is, the game tries to do too much — it wants to address just about every major social issue and idea, including racism, American exceptionalism, religion, extremism, class exploitation, labor unrest, totalitarianism, alternate realities, and the police state. There’s a lot going on, but at no point did I think that anything important was actually happening, since none of the major storylines received the time and attention they deserve. This suggests to me that the developers didn’t have a firm grasp on what the game was really about. 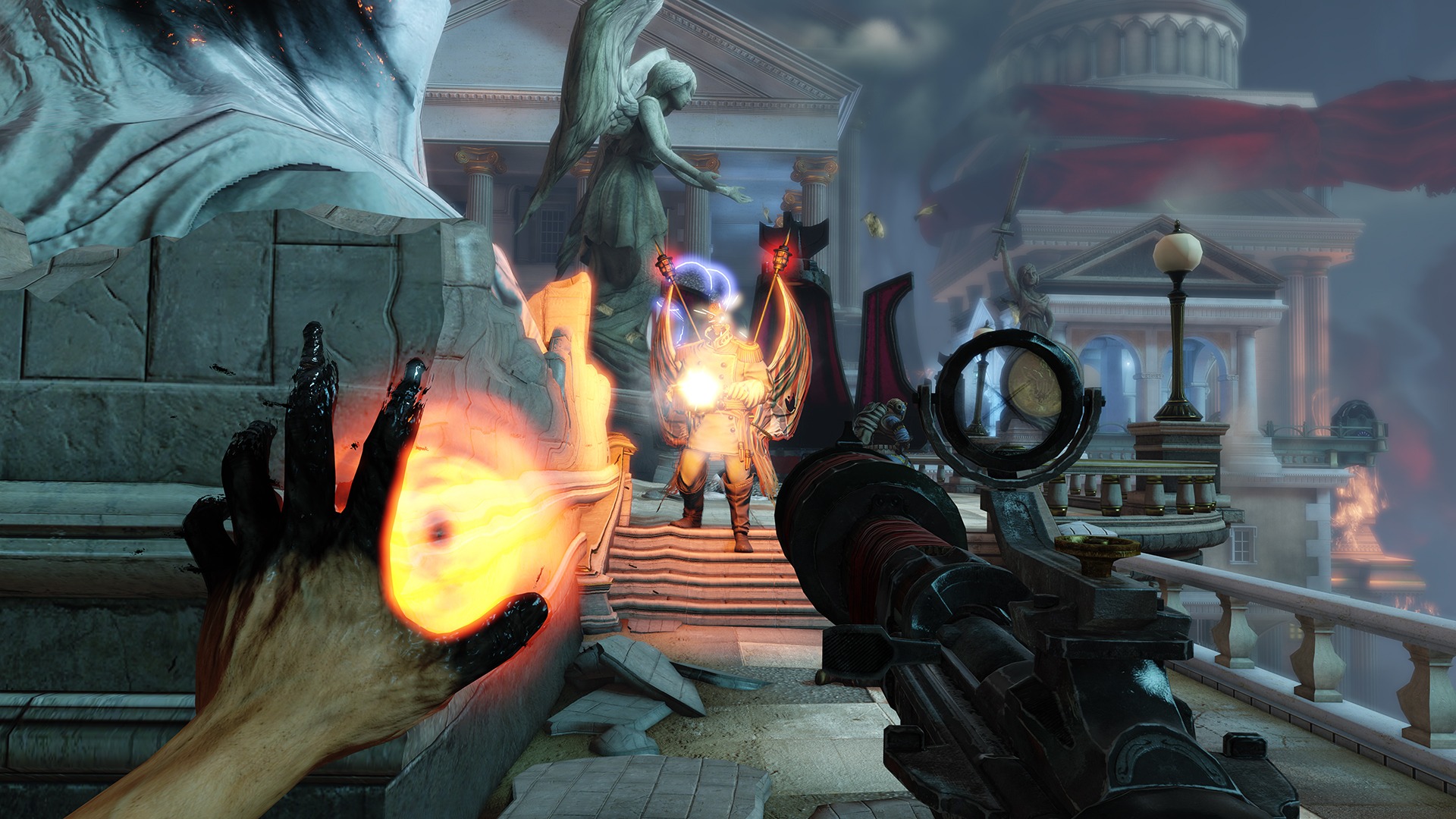 There’s nothing wrong with games that have something important to tell us, but the writers have got to find a more convincing way to express their ideas and feelings. Instead of the clever satire for which the Bioshock series is known, we get a heavy-handed allegory in which everything in the plot has to serve the same murky purpose. Of course, any topic, including racism, can be the legitimate subject of a videogame, but Bioshock Infinite is not inclined to commit to any particular theme or storyline, perhaps because it has nothing interesting to say about these subjects. While it does occasionally provide a rough, unblinking look at the depths of the cruelty and exploitation in Columbia, it begins to feel too much like an empty exercise in style and not enough like a story. It’s filled with fleeting references to Jim Crow, Wounded Knee, and many years’ worth of atrocities and miseries, but you soon begin to notice that it can’t quite cash the checks it’s writing.

Maybe some of these problems could be forgiven if Bioshock Infinite had nailed the big reveal at the end of the game. After all, this is supposed to be the big payoff, a cathartic moment, when the mysteries of the plot are methodically laid out for us, and Booker and Elizabeth finally arrive at the truth that their entire journey has been pointing toward. The problem, though, is that the ending comes across as a cheap trick. Booker is supposed to be haunted by guilt from his past; his combat experience has destroyed any sense of connection between his morality and his actions. His entire arc represents the sort of moral confusion that good people feel when they confront senseless events. But we don’t actually get to see Booker struggling to cope with the pain and anger that would eventually transform him into Zachary Comstock, and so the plot twist comes out of nowhere and does not make a good deal of dramatic sense. That makes me think the writers are less interested in developing the character and more interested in holding back vital information for the sake of a dramatic surprise. The critic Peter Suderman recently made a similar argument on Vox about how plot twists rob a story of its dramatic potential. According to him, “Keeping viewers in the dark to preserve a twist denies them character development.” By the time Bioshock Infinite was over, I realized just how many important events were left unexplained and how many characters weren’t developed beyond their basic plot function. 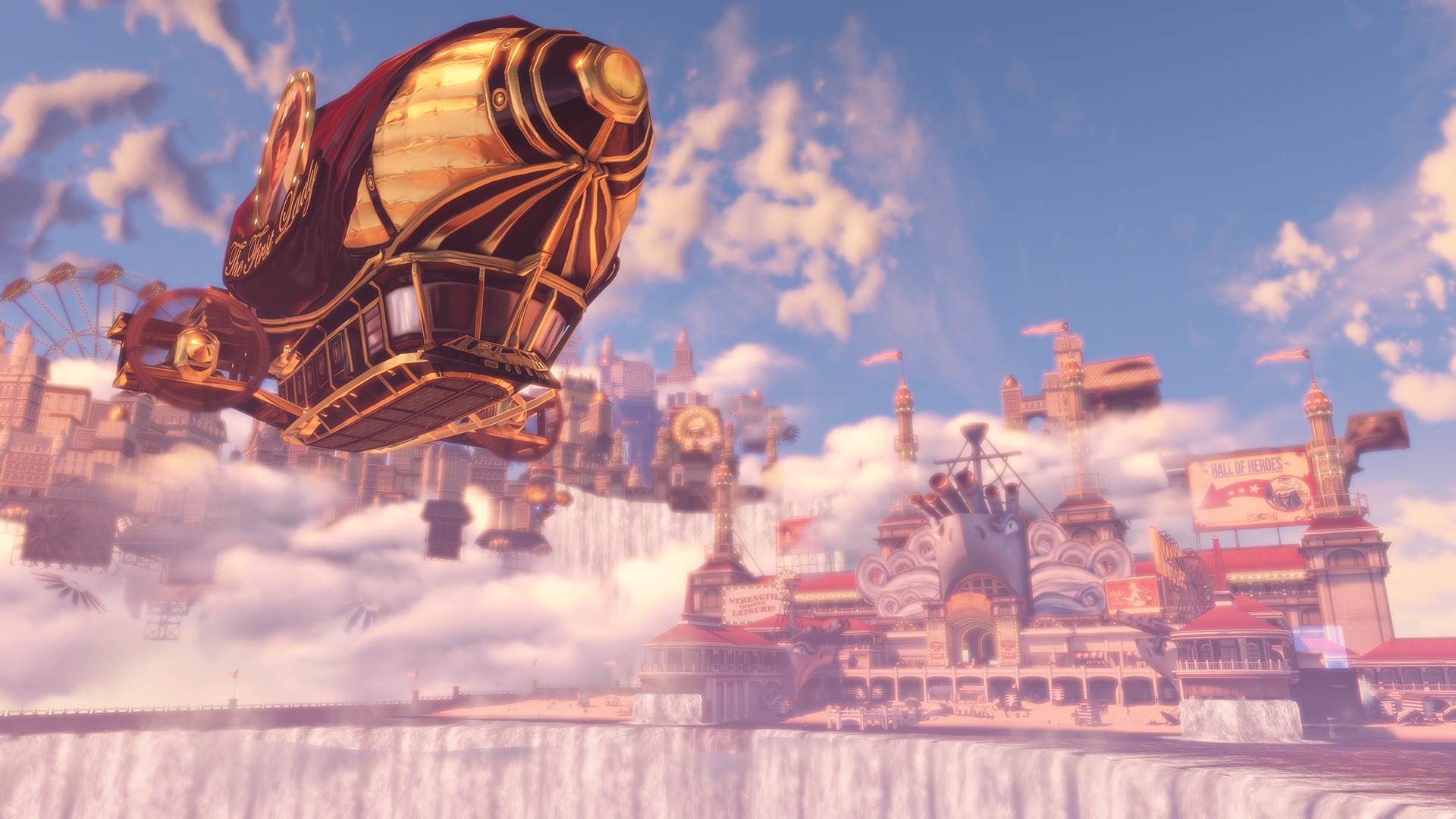 Ultimately, the story doesn’t work for me because I am not particularly interested in these big revelations about Booker’s past, or his connection to Elizabeth, or what’s real and what’s not. Instead, I wanted a story I could engage with on an emotional and aesthetic level. I wanted the game to be much smarter about its plot: less erratic, more deliberate and not quite so eager to get us to the next eye-popping set piece. I wanted the game to get a handle on what it was about and how the society of Columbia functions. And most of all, I really wanted it to be great because the visual design is fantastic. The colorful, high saturated style has the effect of making the city of Columbia look preserved in amber, as if it occupying some kind of dream space. Sometimes the game would show off a location or image not because it’s related to the plot, but because it’s haunting or whimsical or strange. The game’s breathtaking imagery deserves a more meticulously executed vision that actually explores the purpose of its world and the soul of its characters. Bioshock Infinite is not that game. It simultaneously opens and contracts in your imagination while you play it.